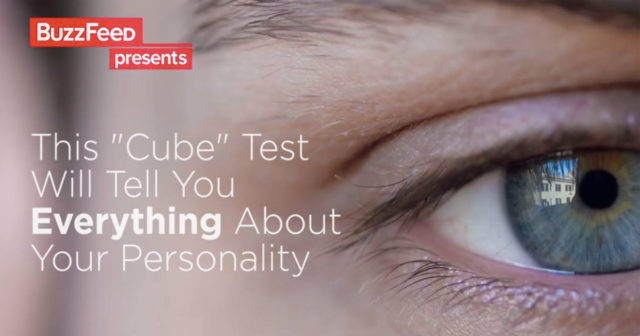 It won’t tell you anything about yourself

You’ve probably seen a video floating around in the last few days. Asking a series of questions, it claims that it will be able to tell you about your love interests, career goals and aspects of your subconscious you had no idea of.

Buzzfeed posted a version of it yesterday. At the time of writing it has amassed nearly 50 million views, 1.1 million shares and nearly 600,000 likes.

The questions are pretty average. “How big is the cube?”, “What is it made of?”, “There’s a ladder nearby, where is it in relation to the cube?”. They seem innocent and completely harmless. But the origin of this trick isn’t just a “Japanese psychology game” as claimed in the intro of the video.

While it’s possible that its original use was in Japan years ago, it is far more commonly known as The Cube, one of a series of ‘plays’ used by professional pickup artists to entice women.

In 2008, Pickup artist Neil Strauss uploaded a video in which he showed trainee PUAs how to game a woman using The Cube.

It’s referenced heavily in his book The Game, a pickup artist bible that has claimed credit for teaching socially backward losers how to pick up and entice women. It’s described as part of a “Yes ladder” and can be found in the glossary of The Game:

YES-LADDER—noun: a persuasion technique in which a person is asked a series of basic questions designed to elicit positive answers, increasing the likelihood that the person will also respond in the affirmative to a final, open-ended question. For example: “Are you spontaneous? Are you adventurous? Would you like to play a game called the cube?”

Mark, a former student at Swansea, admitted to using the technique years ago. He said: “I’ve used it to get with girls all over the place, I found out about it in Freshers in 2013.

“I once did it on a girl when she was completely sober and I was smashed, it still worked”

It is used by PUAs to “demonstrate value” – part of their technique which involves isolating the target and feeding them compliments disguised as insults. It’s described as a type of neuro-linguistic programming which, according to the book, is: “A school of hypnosis developed in the 1970s.

“Unlike traditional hypnosis, in which subjects are put to sleep, it is a form of waking hypnosis in which subtle conversational cues and physical gestures are used to influence a person on a subconscious level.”