Every week 12 young people die from an undiagnosed heart condition

This week 26-year-old England cricketer James Taylor was forced to retire after he was diagnosed with a serious heart condition. He had recently made his way into the country’s top order for the tour of South Africa, but complained of feeling light-headed in a game against Cambridge. Taylor got himself checked out, and was told he wouldn’t be able to continue his career as a sportsman.

Some, however, aren’t diagnosed in time. Nina Jelen was 23 when she died from a heart condition that she was entirely unaware of. The only sign that something was wrong was a fit she suffered 18 months before her death, but after hospitalisation she was quickly discharged and simply advised not to drive for a year. “Nina was an apparently healthy girl, happy and well-adjusted,” says her mother Paddy. “She had had no major illnesses and was quite athletic.”

Sudden Adult Death syndrome kills 12 young people every week in the UK. 80 per cent of those deaths occur in people who have exhibited no prior symptoms. The charity Cardiac Risk in the Young (CRY) define it as a “non-traumatic, non-violent, unexpected occurrence”.

“Simply put, fits, faints and funny turns need referral to Cardiology,” adds Paddy. “If Nina had had the correct referral she could have been fitted with an ICD and maybe last week we would have been the proud parents attending her graduation in Part II Architecture.”

First bit of fresh air in a week, safe to say I've taken this for granted ? #WhenLifeGivesYouLemons #lifestooshort

Sudden Adult Death Syndrome is a blanket term for many different causes of cardiac arrest. They can include a thickening of the heart or an upset of the heart’s natural rhythm. The technical name for James Taylor’s condition is Arrhythmogenic Right Ventricular Arrhythmia.

In 2012, Bolton midfielder Fabrice Muamba suffered a cardiac arrest on live television. Muamba’s heart stopped beating for 78 minutes, but he was saved thanks to a fast-acting medical team. The incident – chilling for anyone who watched any of it on television – raised the profile of cardiac issues in the young.

According to the experts, active, athletic people are more likely to be affected, as their hearts are stressed the most. “While it does not actually cause sudden cardiac death, sport can significantly increase a young person’s risk if they have an underlying condition,” said a spokesperson for CRY. “In Italy, screening is mandatory for all young people engaged in organised sport. They have reduced the incidence of young sudden cardiac deaths by 90 per cent.”

“My son Andrew collapsed and died whilst out with his friends,” says his mother Ruth Lowe. “You can imagine what a devastating shock this was – we didn’t really take in what had actually happened.” Andrew, from Preston, was just 21 when he died, and had few noticeable symptoms, though his father had died from a similar condition years earlier.

“My first instinct was to make other people aware of SADS,” says Ruth. “Simply because if I’d been aware I would have insisted that Andrew had gone to the doctors and been tested as soon as he had complained of repeated indigestion.”

CRY now screens Olympic athletes and works with a number of sporting bodies including several FA teams, and wants to give every 14-year-old and above access to free cardiac screening. Screening is strongly recommended if you have had any young, sudden deaths in the family. Similarly, if you experience exercise-related chest pain, breathlessness, palpitations, dizziness or fainting, it is recommended you see a doctor. 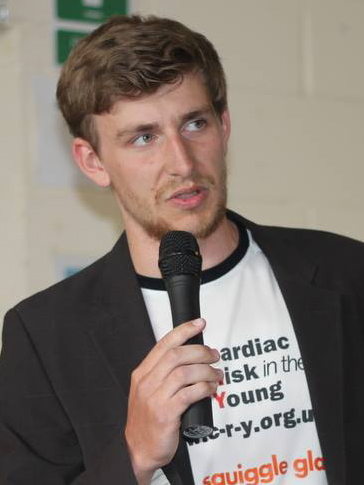 Tim Butt is a survivor who suffered a cardiac arrest just days before his 24th birthday, and now campaigns for CRY. “I found the situation alarming – that something like this could happen to me, as a fit aspiring sportsman. Now I raise money for CRY, to help those with conditions like mine, with a hidden unknown heart disorders with no side effects.”