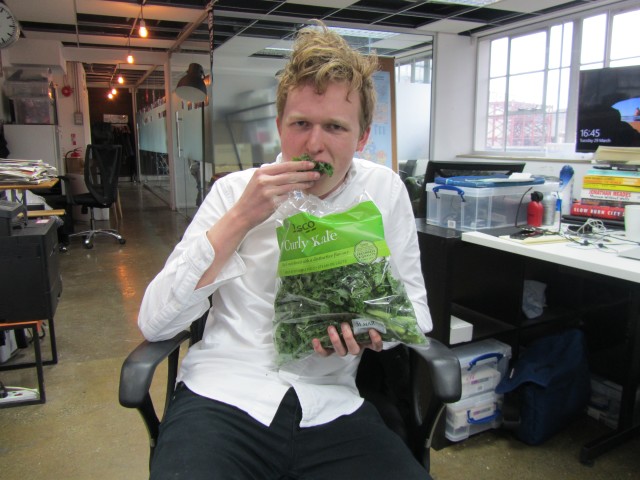 Let’s be clear: Kale is revolting and makes everything it’s with taste worse

My question today – and it’s a question I’m asking every lunch, every dinner, every time I’m staring at a menu or a supermarket shelf – is where the fuck did all the kale come from?

Kale is utterly revolting and totally ubiquitous. I’ve seen kale down the Vietnamese, scrunched up on expensive pizza, inserting itself into everything Pret sells.

Now the thing is, there are a few foods like kale that you wouldn’t have heard of back in 2006. In 2006 I’d never eaten an avocado or a sweet potato. Neither had you unless your mum was Nigella Lawson. And you know what? That was a Bad Thing. Sweet potato and avocado are definitely Good Things. Say you proposed to me that I spend the rest of my life inside of a giant, buttery, oven-fresh sweet potato, just calmly eating my way out of it with a massive spoon. Well, yeah, I could picture myself doing that to be quite honest with you.

But kale? Kale tastes like armpit and old newspapers. It’s the sad cousin of cabbage for fuck’s sake. If anything is sad enough already it’s definitely cabbage. Who’s selling all the kale? Who’s idea was it to Gigi Hadid-ify all the food? Kale is based on a slightly noble, slightly sinister ideal: if you want to look like a supermodel, then you better start eating like one. Which is absolutely fine, I guess, until I’m sitting at home on a Sunday and Mum’s decided to totally ruin the roast by adding “something new” to it – something new like kale. Honestly, I’d rather have a gravy that’s nine parts bleach than sit down to a roast chicken dinner with a side of kale.

I bought a bag of kale from Tesco Express this lunchtime. I wanted to be absolutely sure it still tasted as bitter as Steve Brookstein, and spoiler alert: it is still as bitter as the first man to win the X Factor. But I thought if I were going to write about it, I had to really taste the kale, chew the kale, live the kale.

And yeah, everyone around the office looked at me and complained. Why wasn’t I steaming the kale? Why wasn’t I sautéing the kale with garlic? What I say to them is this: I’ve done cooked kale, I’ve done kale as a crisp, and I’ve done kale as a raw health organic supreme ball. Maybe if I were a well put-together, vitamin-packed unit of a human being I’d find a way to like it. But I’m not. I chain-smoke and I stay out late and sometimes, when I’m pretty sure no one will ever find out about it, I go to KFC and order half a dozen, cruel, factory-farmed hot wings and a Pepsi to eat and drink all by myself. And I fucking love it.

Let me share a dream with you, my friend. It’s a dream of a world like ours: there are cars and buildings and trees and abstract concepts like love and justice and equality. But the people in this world, well, they seem happier, they move differently, as if the burdens of daily, average life don’t weigh quite so heavily upon them. And this extra something, this frisson of energy these people have, is particularly apparent when they have dinner and lunch. If they seem free it’s because they are: this is a dream of a world without kale, an ingredient so overwhelmed by its healthiness that it tastes totally empty.