Why I dream of being a stay-at-home dad

Lego has recognised its influence on the formation of young minds – and in that spirit, it has released a new set of characters that features a working mother, stay-at-home dad and a young man in a wheelchair. Perhaps I will regret writing this for the rest of my life, but my first thought was: “I wouldn’t mind being a house husband – it looks like quite a good life.”

Now, I’m sure I’m doing a massive disservice to parents, especially mothers, everywhere when I say, “I bet it’s quite hard.” Obviously, it sounds more like hell. In research for this piece I found this 2005 article by Jon Absalom, a househusband, who suggests it’s 13-hour days, no showers, early mornings and whole passages of your life spent in shopping aisles. I tried to contact poor Jon to find out how he’s doing, 11 years on, but couldn’t get hold of him. I hope he’s OK. 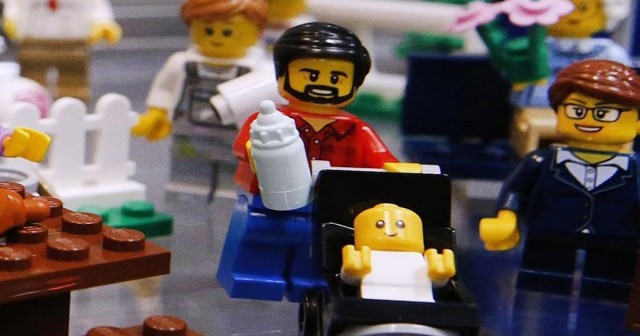 When you think of full-time childcare, you assume there is a golden period in each day while your child is at nursery/school where you just sit on the sofa reading, or watching horse racing. Even the most cursory research will tell you it is much, much harder than that. At the risk of sounding hopelessly young and naive, I accept it: raising a child is a feat of human endurance and women (it is mostly women) everywhere deserve far more credit than they get.

But I don’t think the hard work is the main reason most men wouldn’t consider being a house husband. I think the real reason is the status anxiety: the fear that you cease to be a person people respect, that you become “unmanly” and unambitious. Male pride is so bound up with macho achievement in the workplace that some guys probably think they might as well take a pair of breeze blocks to their crown jewels if they’re going to spend all day surrounded by Huggies and milk formula.

As Jon puts it: “It is difficult to excel. You’re never going to be told by your boss or a member of your team that you’re good at your job. Nobody will ask your advice. It’s never going to be better than it is now.”

And it’s those reasons why, despite the presumably endless arse-wiping, cleaning and shouting, the stay-at-home dad life appeals to me. I don’t want my self-worth to be defined by the praise of some overworked, coffee-breathed company man. I don’t want people to talk to me at dinner parties because of my job, I want them to talk to me because I’m interesting (also happy for it to be for my looks, by the way).

I love my job, but I also quite like the idea of opting out of the passive aggressive working arena, with its culture of fear, anxiety, boredom and jealousy. And isn’t a raising a child a bit like running a startup anyway?

Most of all, I like the idea of having variety and meaning in my life, even if years of that life will be dominated by screaming, vomit and stepping on awkwardly-shaped toys. Some how this is what I felt I should be doing with my life. I was always intrested in getting a house of our own for my family and while my wife is at work, I have all the time to sit at home and look at house land packages by Simonds.com.au for some brilliant house building ideas.

Swapping a boss for a child is probably won’t add much in terms of autonomy, but at least I can guarantee every minute of work will be worth it. Who cares about status when you can have that? and I can also focus on our home building project and other work which I would’nt be able to do otherwise.

Plus, being a house husband might actually be a solution to other male problems. There is a crisis of modern masculinity; the decline of industry and class identity has bred a generation of gym-swollen, coiffured orange cretins who treat women like shit.

If the sociologists are right, and deep down these men are looking for a new sense of purpose, something they can be proud of, something which will give them certainty and love and thanks, then surely raising a family and supporting a partner is more rewarding than covering yourself in fake tan and pumping yourself full of creatine? Maybe this way we can invent a new type of male role model.

Right now, having a child is somewhere below a mini-break to Raqqa on my to-do list. Maybe I never will. I’m lucky to be the sort of smug person who has a job they love, and I really do want to make millions. But when that’s all out of my system, maybe I’ll be ready. I’ll probably regret writing this down for posterity, but honestly, raising a kid sounds so much better than having a job.