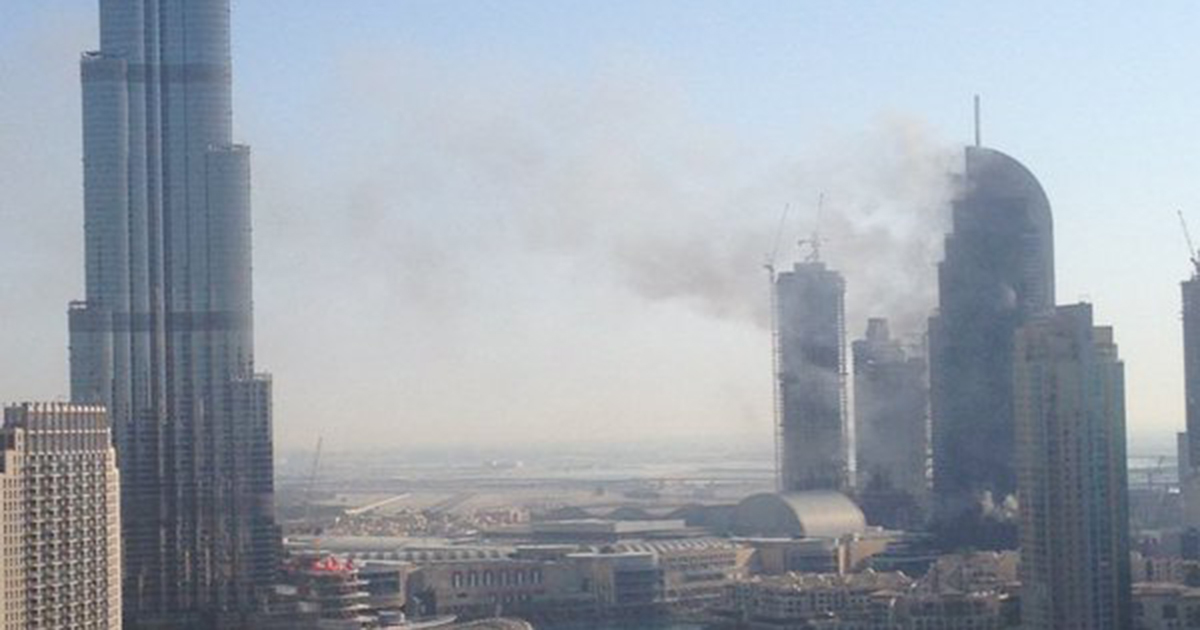 It was engulfed in flames within just five minutes

We were meant to watch the NYE fireworks from our balcony — instead we watched mouths agape as a devastating fire broke out near our house and made international news.

New Year’s Eve is meant to be the biggest night of the year, especially in Dubai, and one of the perks of living opposite the tallest building in the world is the chance to watch best fireworks display in the world. 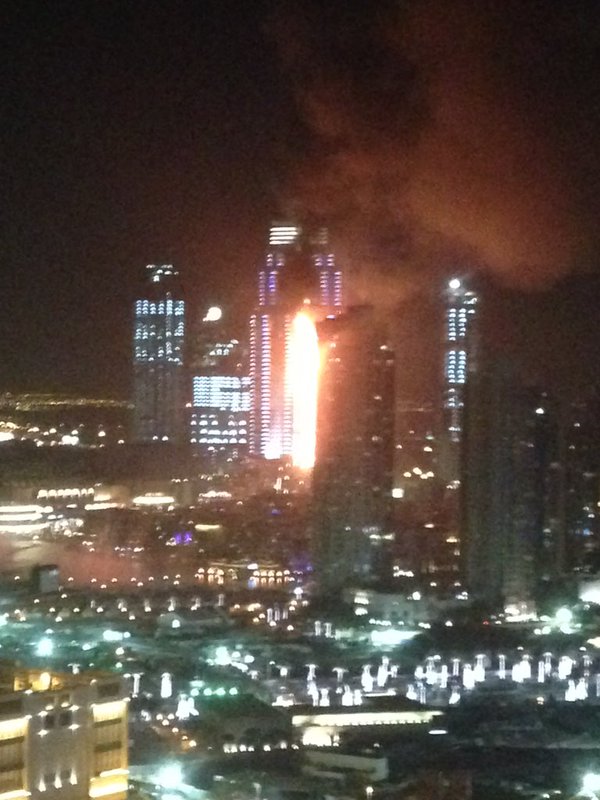 The Address in flames

On the 27th floor of my apartment block, my friends and I were planning to go out to the neighbouring hotel for several hours of Dubai-tastic clubbing. But at 9:30 as we looked out on the balcony we saw fire coming from the an icon of Downtown Dubai.

The Address Downtown is one of the most iconic buildings in Dubai and even appears on the Snapchat GPS sticker thing for the area. So it’s a pretty big deal. The fire started on the terraces outside — where we’ve all been for a drink plenty of times before. We were all asking if we knew anyone down there — literally ringing as many people and telling them to put on Facebook not to come to Downtown because of it.

When people started being pushed back on to our street we all listened to see if anyone was shouting. But no one was shouting. There weren’t any police sirens going off. It was just so, so quiet, and we all we could see on the ground were the lights from people’s phones.

The blaze itself was huge. It shot up in one swift line up the side of the tower. We heard people on other balconies below us all coming out because they could see the massive fire. Dubai has been properly windy the past couple of days and the thick black smoke made its way straight to us on the balcony.

Panicking, we wondered whether the music blasting out to celebrate the new year would be turned off. Then the huge screen by the water went black, followed by the sudden end to the music at the Burj Khalifa. There was an eerie hush as people began being pushed back from the Downtown area up to the main highway towards our house. Looking down, everyone was strangely quiet, and cars began making hasty U-turns to get away from the billowing smoke.

Can see flames coming out of #TheAddress about half way up which explains the smoke. Fire started at 9:30 last night now it's 12:45.

From what I can see: people being allowed into the Downtown area. Beyond shocked. Fire still going strong in #Dubai

The fire was huge by this point, with all 63 floors of The Address totally engulfed in the flames. In England, people may have panicked or screamed or fled, but Dubai seemed a lot more chill in dealing with the crisis. At our party, I checked Twitter again and again to see that they were making progress in putting out the flames. One of the guests at our party was a priest, and so everyone prayed for the safety of those in the building. Nobody died in the blaze, so the evacuation procedure, and the calm that inexplicably fell over everyone, obviously worked.

Someone rang and said that Twitter was only reporting a minor fire incident, which we knew was crazy talk. So I felt that I needed to start live tweeting it. The first feeling I suppose was to make sure everyone was OK — but what can we do on a balcony 15 minutes away? So I just thought we needed people to know what was going on. 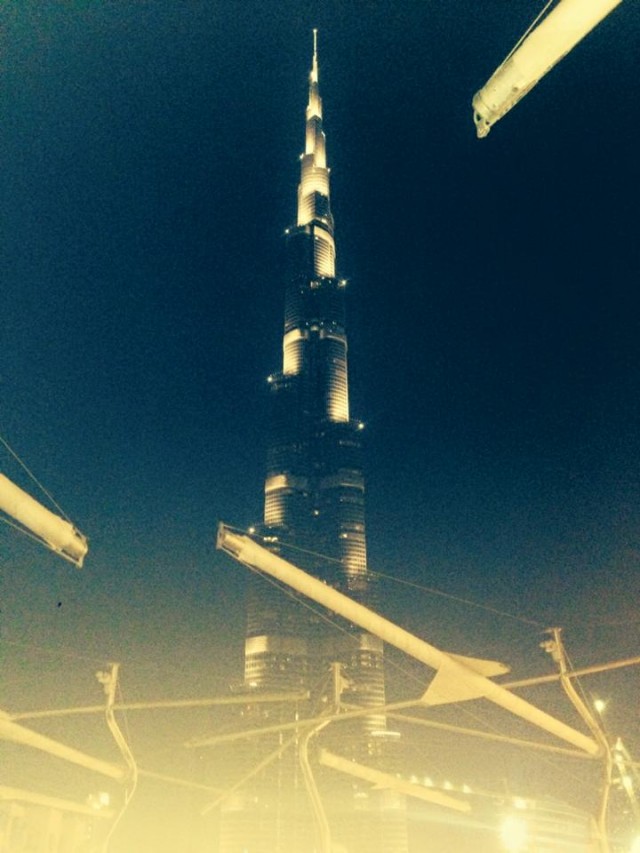 The view from the terrace area where the fire apparently started

After the fire started we saw firetrucks coming up the SZR, the main road in Dubai — but the NYE traffic was six cars deep. They decided to close the road — the equivalent of suddenly closing a motorway in the UK, if that explains how important it was. Inside our house, our friends all started wondering whether they could get back on the road to go home, and if not where they would go.

Then a huge explosion went off. I was inside at the time and could hear the explosion loud and clear. Ten or so minutes later another one went off – apparently caused by gas. The fireworks were meant to go off in just five minutes. The fire was huge by this point and we were calling all our friends to make sure they were OK. Thankfully the only person that was meant to be Downtown had chosen to go to the other side of Dubai, Marina.

I started tweeting the moment I saw it. I didn’t know if people were going to be able to see it — or if it was going out super quickly. Shockingly the fire is still going on, the afternoon after it started. The BBC contacted people on the ground and it later turned out that their correspondent was in a traffic jam outside of the Downtown area. 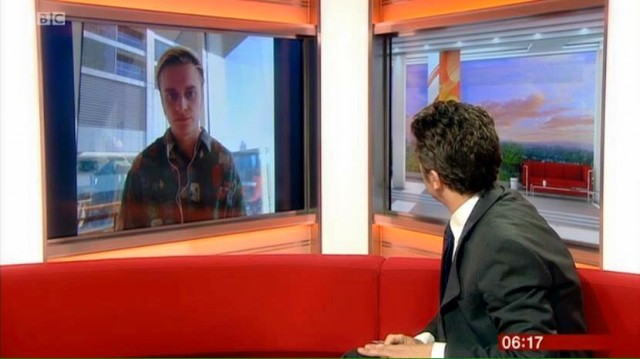 Speaking to BBC Breakfast about what we could see

Everyone kept on saying “Worst possible thing on the worst possible day”. And because we’d had a bit to drink we all said that a couple of times. We were meant to be watching the fireworks so we were standing around just in disbelief when we heard they were going ahead with them.

Fireworks in Dubai are a big deal. Like a big deal. Biggest building in the world, biggest flag pole, and naturally we have pretty spectacular fireworks.

Today British media was wondering whether it was appropriate to have gone ahead — but life in Dubai continues on as normal. At church this morning all the engineers were centre of attention: a situation no one in that position anticipates. They said that actually disabling all these thousands of fireworks that took months to prepare for, would have been a bigger hazard than going ahead with them.

The light display has started in Dubai. It's actually happening. Oh my god.

So while the fireworks went off, we watched in shock as a world famous hotel where we’ve all been, burned — lit up by the fireworks. Our friends decided that their best chance to get home was to leave then, but it took them an hour and half because the sheer numbers of people.

I’m sure everyone will be a bit shaken up. Living in a high rise will always carry risks of fire: but watching a neighbouring tower go up in flames is terrifying. 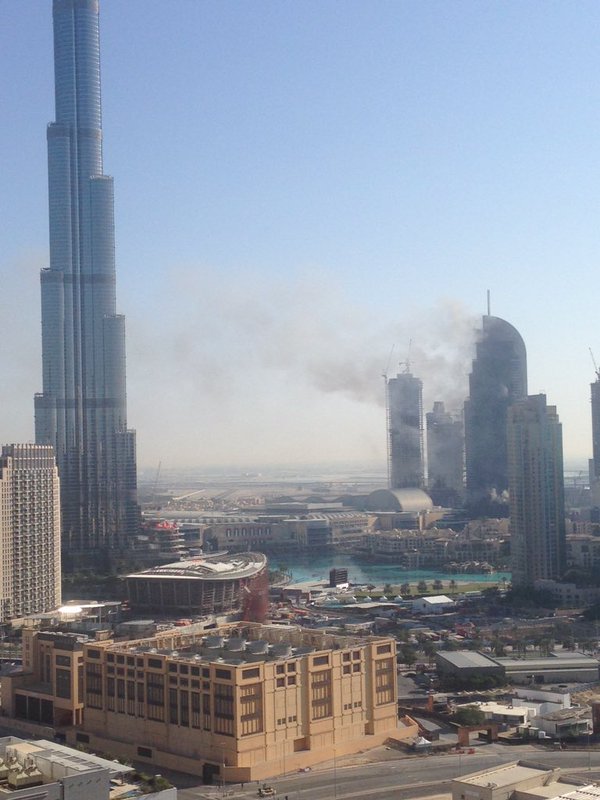 The amazing thing is that no one was killed by this, and clearly the people on the ground like first-responders and hotel staff did an awesome job. It makes you feel a lot better that no mater how huge an incident is a zero-casualty outcome is possible.