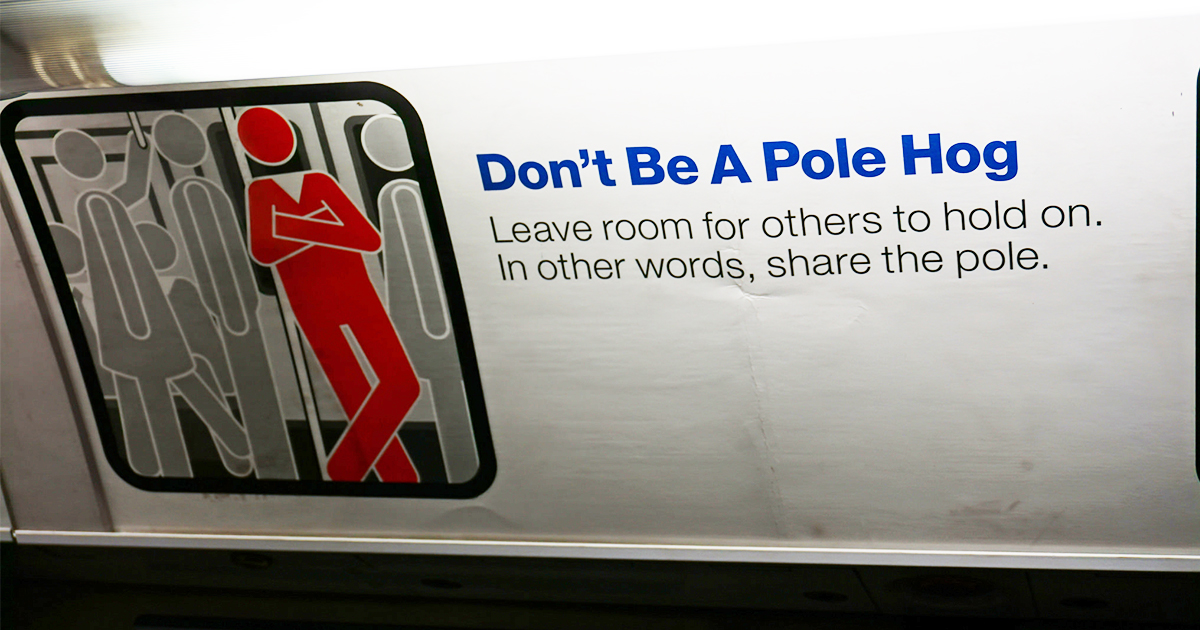 Pole-hogging on the Tube is annoying for everyone, not just women

Poles are for dancing not hogging

There’s a menace on the London Underground: men are leaning their entire body weight on the pole, hogging it for themselves and stopping anyone else from holding on to it. The fact it’s mostly men who are guilty of this has led a lot of women to label it a feminist issue, but really gender has little to do with it. Unlike man-spreading, this basically comes down to not being a twat.

Picture it: you could be nailing the together-Londoner vibe, diving into the last carriage of the Piccadilly so you don’t end up so far down South Ealing’s platform you’re in Northfields. But you better hope some man in a pin-striped suit isn’t hogging the pole or else you’ll be falling all over the place and ruining the perfectly planned vibe you’ve got going. When you’re stressed out, mostly about the price of a pint, you don’t need someone hogging the only way you can physically support yourself as the metal tube zips through London’s underground.

In theory, men taking something which doesn’t belong to them to the detriment of others sounds exactly like something they would do. But surely this is just a symptom of a bigger problem: everyone in London is a massive twat at rush hour. If it’s not the entirety of London wishing to squeeze into a carriage (no we can’t “move down” you Hounslow tit) the problem is people taking up space. People who cross their legs and use up enough space they may as well have brought along their five children. Of these inconsiderate irritants though, pole-hoggers are a special breed.

Total overcrowding on the @piccadillyline what the hell is going on?? Missed two trains because they're so full. pic.twitter.com/tttP4asmnK

The pole is already in the most inconvenient space because everyone needs to file past it when they go in or out of the carriage. Now the rest of us have to deal with some lazy pole-hogger standing there like an invalid and depriving anyone else of the chance to not fall over the moment we start moving.

Where’s the sense of community, of comradely behaviour? We’re all having a super shit time and I know we can’t smile, talk or make eye contact, but maybe if these men really thought about it, they’d realise reading the Evening Standard doesn’t require two free hands. Nor does their back need so much support.

Prime example of a pole hogging plonker on the tube when others r trying to hold on too! #commutingwoes

So on behalf of the women trying to smash the glass ceiling, the seat-less, or people who can’t work out the weird standing-up things: please stop being arseholes. Stop hogging the one mechanism designed to actually help people who don’t have a seat. You’re not the only ones who’ve had a bad day and we doubt hogging the pole is making you feel any better.

Start showing a little bit of brotherhood and share the pole instead. Because the only time a man should have the pole to himself is when he’s drunk, hot and at a club where I’m paying for the privilege.