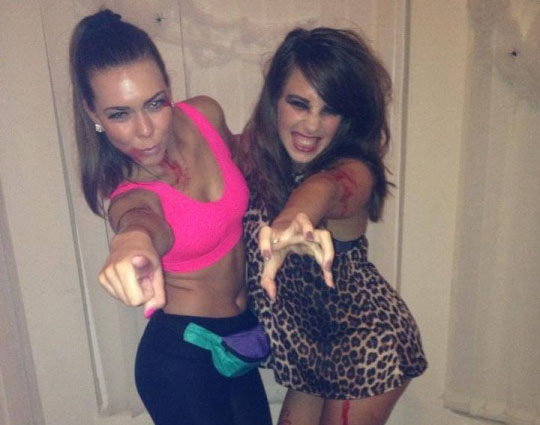 What does your really standard Halloween costume say about you?

We are what we wear. In 2014, you don’t explain who you are by pointing to the political party you vote for, or which miserable job your Dad does – it’s your consumer choices which define you. And Halloween is a chance to show what the real you is like, when you can be anything.

You’d think having the freedom to dress up as whatever you want would encourage some originality, but the reality is that every year the people and costumes are strangely familiar.

The only question is: which stereotype are you?

The bag of muscles 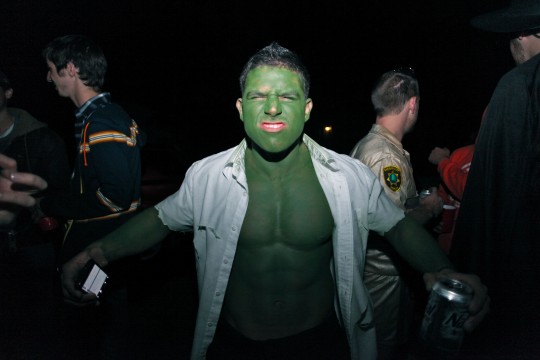 Anything to show off the abs

In case their physique didn’t make it obvious, these guys play rugby. There’s a slim chance it will be another sport, but other teams know better than to risk being mistaken for a rugby boy.

Having chosen a costume that allows them to be topless (which is nearly always Hulk, but could be the Smurfs), they move around in packs chanting and downing pints like it’s a normal Wednesday night social.

Their commitment to character is so impressive that – just like the Hulk – they’re quite happy to over-react and get needlessly angry if anyone gets in their way. You’ve been warned. 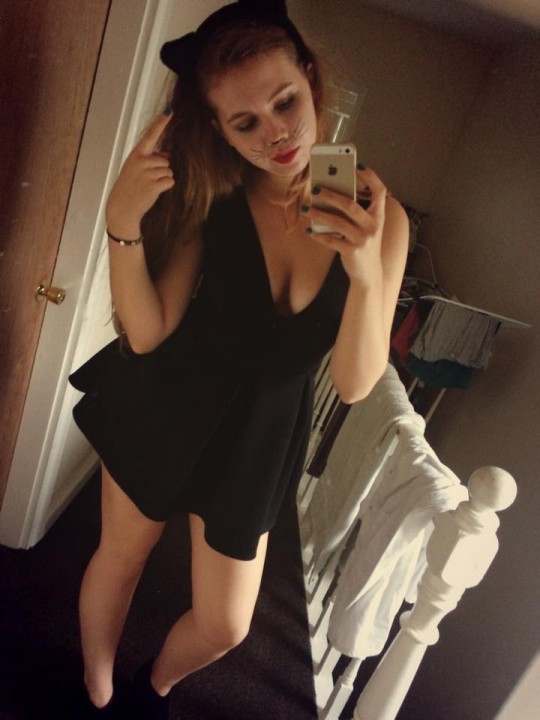 In a way, this is the female equivalent to the bag of muscles. These girls live and die by the Mean Girls rule that Halloween is the one night of the year girls can get loads of flesh on show and not be judged. Obviously, that should be every day – please don’t tweet us (do).

They’ll spend the entire night as an insular clique, dancing in a tight circle and doing their best to ignore the outsiders.

They don’t need other people in order to have a good time, and they definitely don’t need to be told their cat costume isn’t scary enough for Halloween. All they’re here for is doing shots with their girlfriends and getting a new profile picture.

Of course, there is a double-standard at work, in that girls showing off this much skin are accused of being “sluts”, while the male equivalent are just seen as dicks. We’ll let you settle this issue in the comments below.

The taking it a bit literally 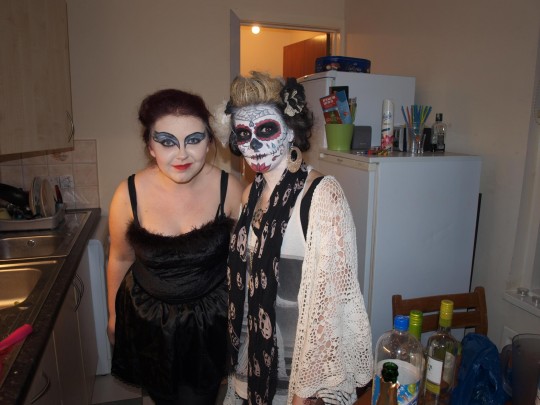 Going heavy on the scary make-up

All their favourite films are horrors (which is slightly sinister) so it’s no surprise their costume has a level of authenticity that wouldn’t be out of place in a Saw film.

Yeah, we get it, Halloween is about being scary, but come on – the world’s moved on, do something a bit more original.

There’s a reason nobody else is talking to them. 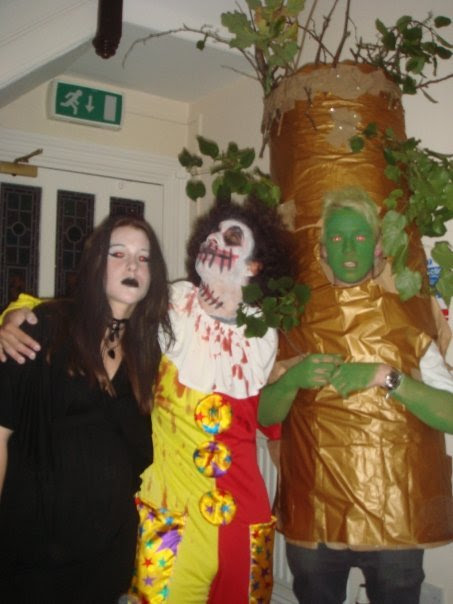 Why are there random bits of cardboard on the floor? Because they’ve fallen off this guy’s costume probably.

Usually an Arts student (how else do they have enough spare time to make a costume from scratch?), their costume ends up being a weird home-made mess that is long on effort, short on scares.

They’ll be posing for plenty of photos at the start of the night, mostly because they know their costume is likely to fall apart at any moment and they’ll be dancing in just their underwear by 3am. 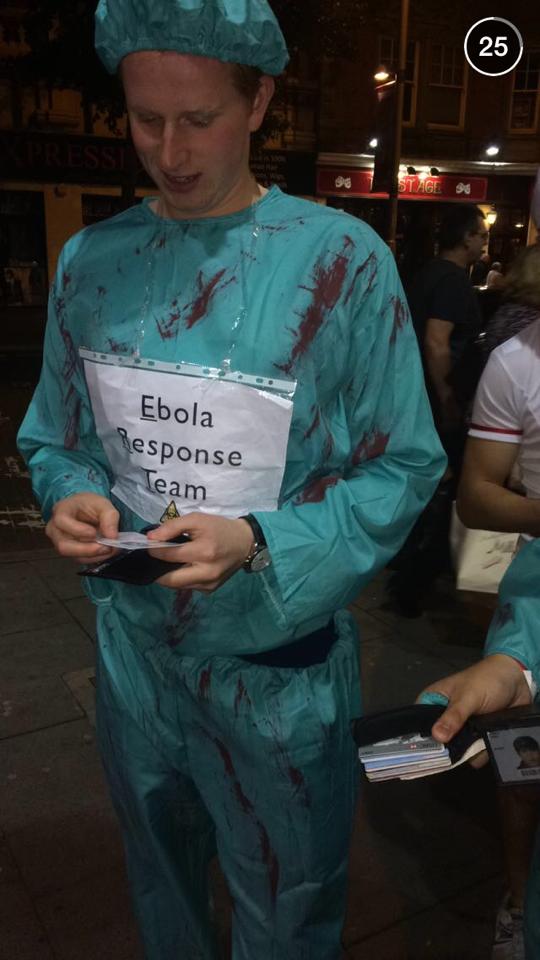 To be on the safe side, don’t pull him

The kind of fresher that demands the hall bar show Newsnight. The weirdo in the library reading a broadsheet newspaper. The worthy student journo  who asks all her friends to share her thinkpiece on arms dealing and the Middle East. They’re studying law, politics or economics, that much you can guarantee.

This person loves the news so much, they wear it as a costume. If they try really hard they’ll work a political angle too so from one look you can tell what their opinions are on anything.

The best ones find something happening at the moment that’s genuinely terrifying (Ebola!), the rest just add the word zombie in front of something normal and boring. Look out guys, here comes zombie Nigel Farage, he wants to eat your brain and ruin our country (or something). 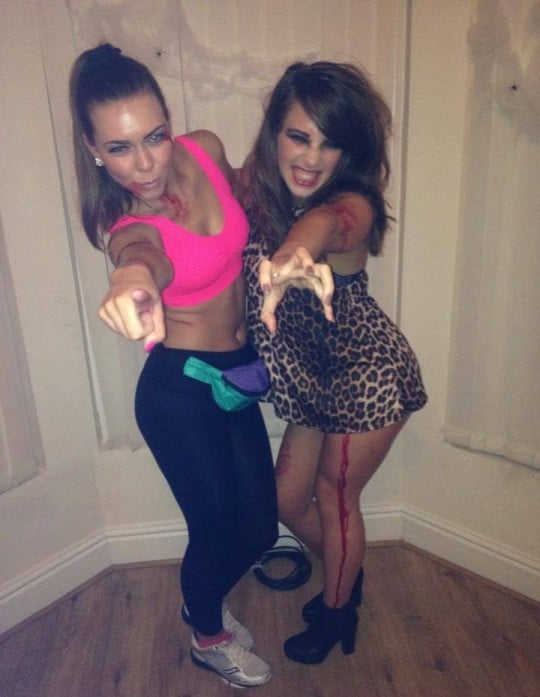 Every Halloween party has one group of BM4Ls who felt it was essential to demonstrate their close friendship by having a team costume.

Their only problem: as they’ve gone in outfits that only make sense when they’re all together, their costume won’t work anymore once they’ve got separated.

You’ll ask what they’re meant to be and then immediately regret it as they launch into a lengthy explanation of how they’re here with six other dwarfs or they’ve lost the front end of their horse.

Side note: the absolute worst example of this is couples costumes. Guys, we already know you’re madly in love because we never get to hang out with you individually anymore. No need to rub it in our faces. 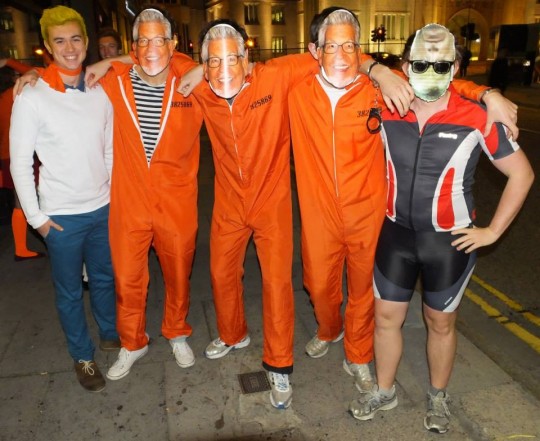 Can you tell what they are yet?

Don’t be this guy (and yes, it’s always a guy). Like a funhouse mirror version of “The topical reference”, they’ve distilled the recent news into the most offensive costume imaginable. Last year it was Jimmy Savile, before then it was dead Maddy or Gary Glitter. Last year two students enraged the nation by going as the Twin Towers.

Not to forget the old classic: blacking up.

If you confront him (it’s usually a bloke) about his costume, be prepared to hear a lengthy argument that it’s “ironic” and that people should lighten up. They’ll probably also say the phrase “political correctness gone mad”. All you need to really know is, this person shouldn’t be your friend.

This year’s most likely bad taste costumes: Reeva Steenkamp on the toilet, sexy ISIS executioner, a Malaysia Airlines plane. You’ve been warned. If you see any, send the pics to [email protected] – we’ll pay you instantly if they’re good. 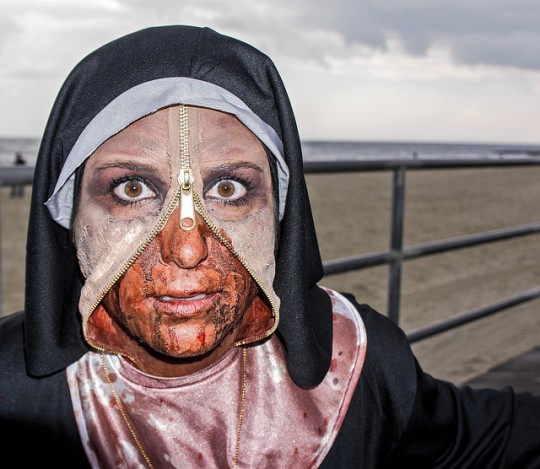 Get away from me

These people already have their costume. In fact, they got it two weeks ago and haven’t been able to stop talking about it since. Mostly because of how expensive it was. They even got special contact lenses to turn their eyes red.

They’re also the ones hosting the house party this Friday that sounds like it’s going to be INSANE, the one promising bowls of spooky punch and dry ice.

Are they American? They definitely want to be. They look forward to 31st October more than Christmas, which is ridiculous. 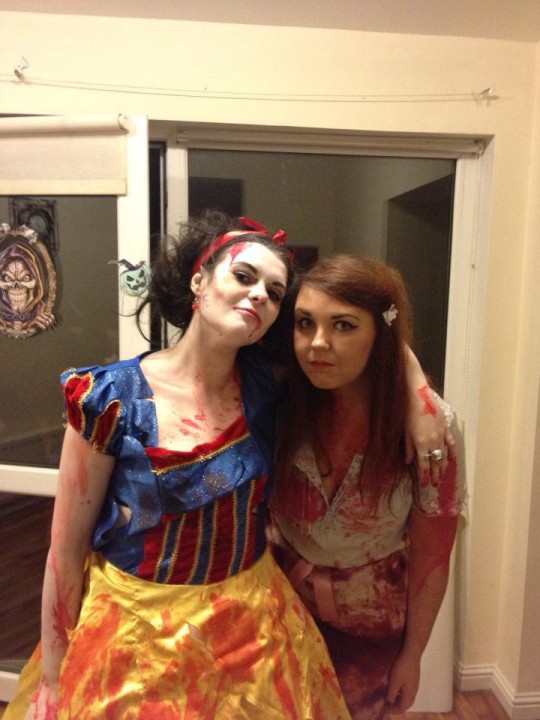 If you want a scary Disney costume, why not one of the ACTUAL baddies?

Rather than try and reference something more current, this girl wants to take something you loved in your childhood and cover it in blood, gore, and (occasionally) inappropriate sexualisation.

Pretty much the direct opposite of the “topical reference”, you just know this girl is stuck in the past, celebrating the anniversary of Mean Girls and listening to the Aladdin soundtrack. She probably still owns an iPod Classic too. 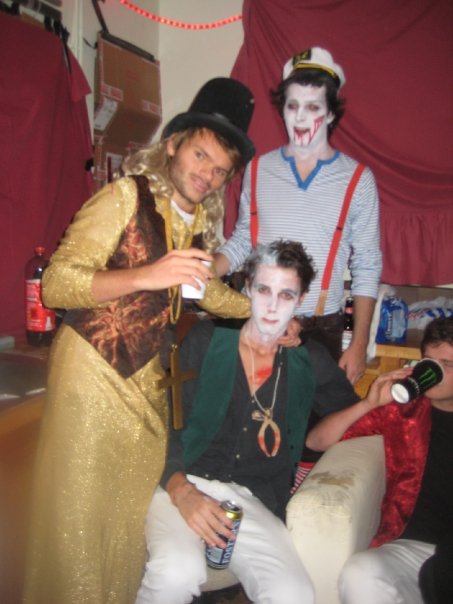 I mean, the guy on the left came as Thomas Becket

Rather than dress up as something conventional, they’re part of the Halloween arms race, determined to have a costume that’s not only more clever but more weird than anyone else’s.

Basing their costume on some obscure character or historical figure, they’ll smugly inform everyone what their costume is meant to be as the preface to a 15 minute lecture telling you why you should care.

Truth is, you shouldn’t. These people thrive on questions about their outfit – don’t fall into the trap. 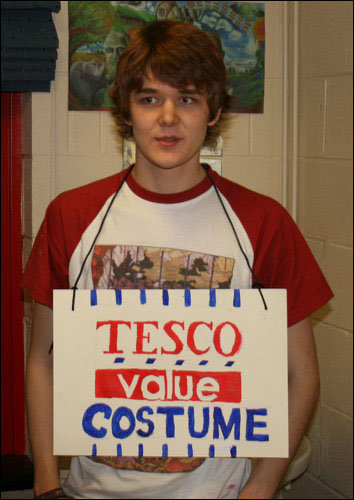 It was going to be a ‘statement about society’ apparently

You just know this friend had a great idea for a costume. They’re an ambitious type-A dreamer, so of course they came up with something completely unique and brilliant.

Only problem is they didn’t have the skill to pull it off, so their ingenious hyper-topical concept has had to be scaled back so much, nobody knows what they are anymore.

Understandably, they’re crushed, so they’ll spend the entire evening sulking in the corner with a can of Red Stripe, dreaming of the costume that might have been. 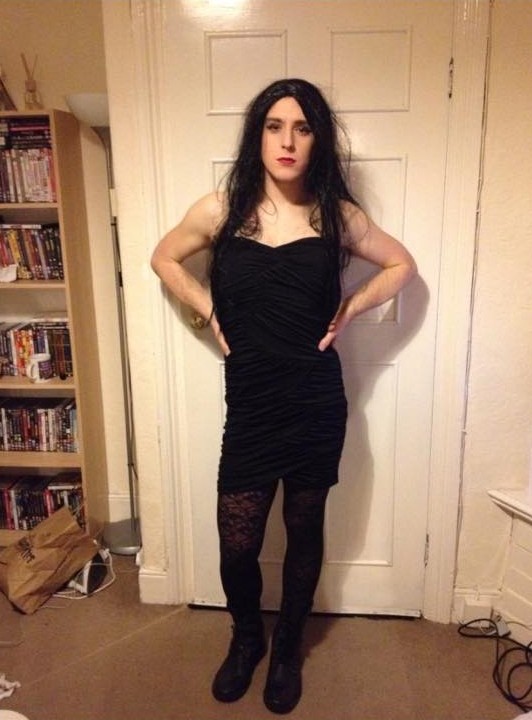 This makes us question the L in LBD

Because men in drag are hilarious right? There will come a day when “trannying it up” is as offensive as blackface when done outside of pantomime season, but until that day there’ll always be a couple of guys who spend the week before Halloween asking their female friends what dress size they should buy.

Whereas the rugby lads dressed as the Hulk choose their costume because it lets them show off all their muscles, this guy only works out the glamour muscles and is therefore “all arms”. That’s surely the only reason why he’s picked an outfit that both emphasises the guns AND holds in the gut. 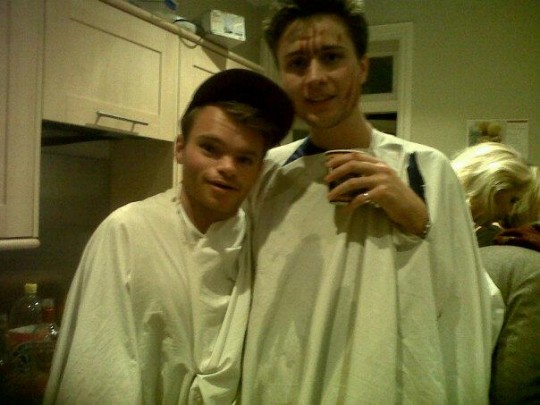 Warning: it’s nearly always a ghost made out of their bed sheet. They’re probably not reading this anyway.