Today thousands of young people who should be out drinking and being awkward are refreshing their Twitter timelines and Facebook news feeds to see how their friends have done. 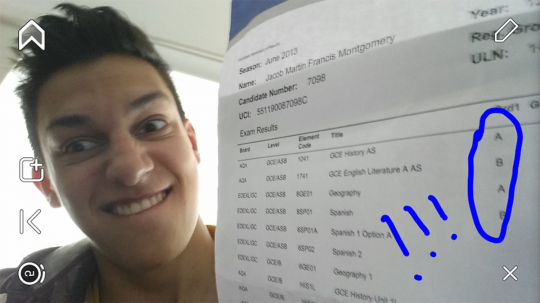 It’s Results Day, and like graduation, that means the country’s most promising young minds are filling their friends’ news feeds with self-absorbed drivel.

This kind of self-deprecating status update should make you feel good about yourself – thankfully you can’t spell any words with your grades.

But you also feel uncomfortable as you imagine him at school, having just opened up his envelope, his friends whacking him on the back, congratulating him on showing the system who’s boss and not putting in any effort.

Sadly, he probably has no future ahead of him. Even more disappointing is with a care-free attitude like that, he’ll probably always be happier than you.

This kind of tweet attacks your brain in different ways. Initially, you’ve no idea what it means. Then you see the significance of the four capital letters. You immediately unfollow and block the person. It’s the least you can do.

Then up pops this announcement. Well, good. Now you know this person’s situation. And you realise that if you wanted to know about his situation, you would’ve asked him. 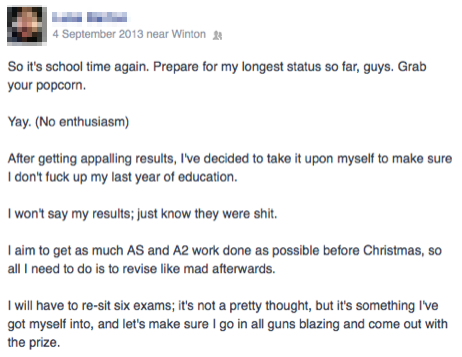 Meanwhile, on Facebook, someone is surveying the wreckage of their AS grades. Some people will make it to the end of this status update. Many won’t.

It’s sad and hopeless for a variety of reasons, and it’s 200 words too long.

Finally, you come to a tweet that you wish you’d written yourself. It’s implicit, it’s light-hearted, and it’s probably not grounded in reality, which no one wants to see online anyway.

You want to see zany jokes and videos of weird cats and people randomly broadcasting their views on UKIP and The Great British Bake Off.

The only other type of update I will accept on my timeline is this:

Short and snappy. No boasting about the exact grades and not ruining it with hordes of emojis. No, it’s not funny, but it’s genuine.

Whatever your results on Thursday, just make sure you’re not a dick about it.