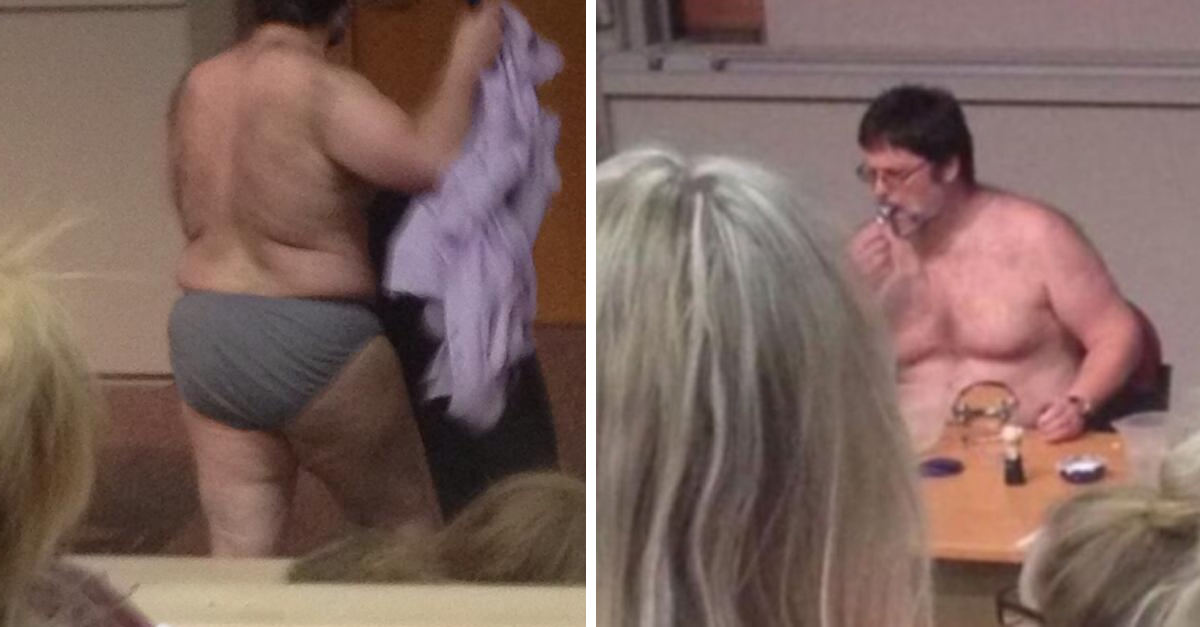 Fleshing out the syllabus: Leeds Met lecturer strips to his underwear in front of freshers

We all appreciate it when lecturers go “off-book” to try and make a subject more interesting.

But an Events Management lecturer at Leeds Met has taken things too far – after STRIPPING to his underwear in a bid to motivate his students.

Placing his jacket over the front desks, Dr Ian Lamond proceeded to undo his shirt and tie before strutting around the room while swinging his trousers around in the air.

The lecturer’s bizarre striptease came as part of a class on how to give an exciting sales pitch, but it’s fair to say most of the students present weren’t interested in buying what he was selling. 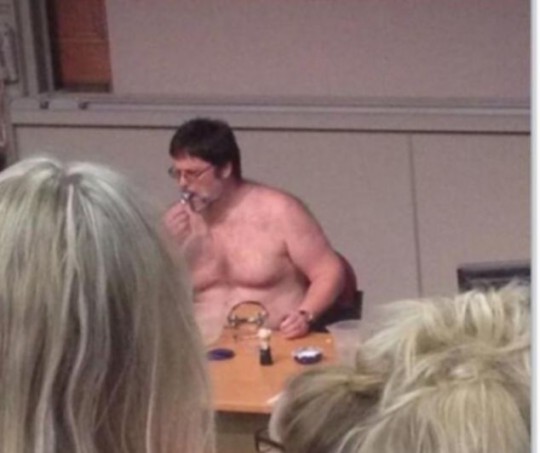 After stripping to his undies, Dr Lamond then sat and shaved in front of the class

University staff became aware of the stunt after shocked students took to Twitter to express their confusion at what they had witnessed, tweeting pictures of the 51-year-old wearing nothing but glasses, socks, and grey underpants.

did not sign up for this at uni – my lecturer is mad #leedsmet pic.twitter.com/S4O2Co64Kx

“Everyone was either awkwardly laughing, screaming or speechless,” reads one tweet, while another student wrote: “I really have no clue what is going on!”

I literally have no idea what is going on right now, why is my lecturer semi naked.. and now painting his face white..

Although he has not been suspended, Dr Lamond is under investigation by the university for the stunt, that also involved him shaving and painting his face white.

@KatieSanders9 Ian Lamond is stripping and shaving to try and convey a point but I really have no clue what is going on!

When asked for comment by the media, Dr Lamond said he would not comment until the investigation was concluded, though in a recent interview with a careers website he does boast about his “(cough) athletic physique”.

Those of you fortunate enough not to go to Leeds Met can get an idea of what you missed out on by watching the video for Pendulum’s Slam. It’s basically the same guy, except it’s not.

Anyone interested in more of Dr Lamond’s academic work can read some of his papers here.