Wait, what? Going to uni is the USA is CHEAPER than the UK

The lovely people of the internet have put this map together showing the yearly cost of tuition at each US state’s flagship university. 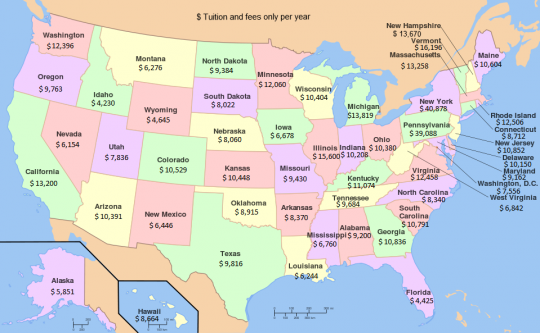 However, there is a catch. This is if you’re from that state, so tough luck if you were about to book flights over the pond.

Apologies to anyone who was hoping to jump into an undergrad in Vermont, New York, Illinois or Pennsylvania – you’ll be forking out much more than you would back home.

Obviously you’ll have to weigh up the pros and cons before booking your flights. It may be a bit cheaper for tuition, but you’ll probably end up about 20kg heavier by the end of your first year.

The most expensive school on the map, NYU, is a private university which makes sense of the huge fee. Also very pricey is the University of Pennsylvania, an Ivy League uni.