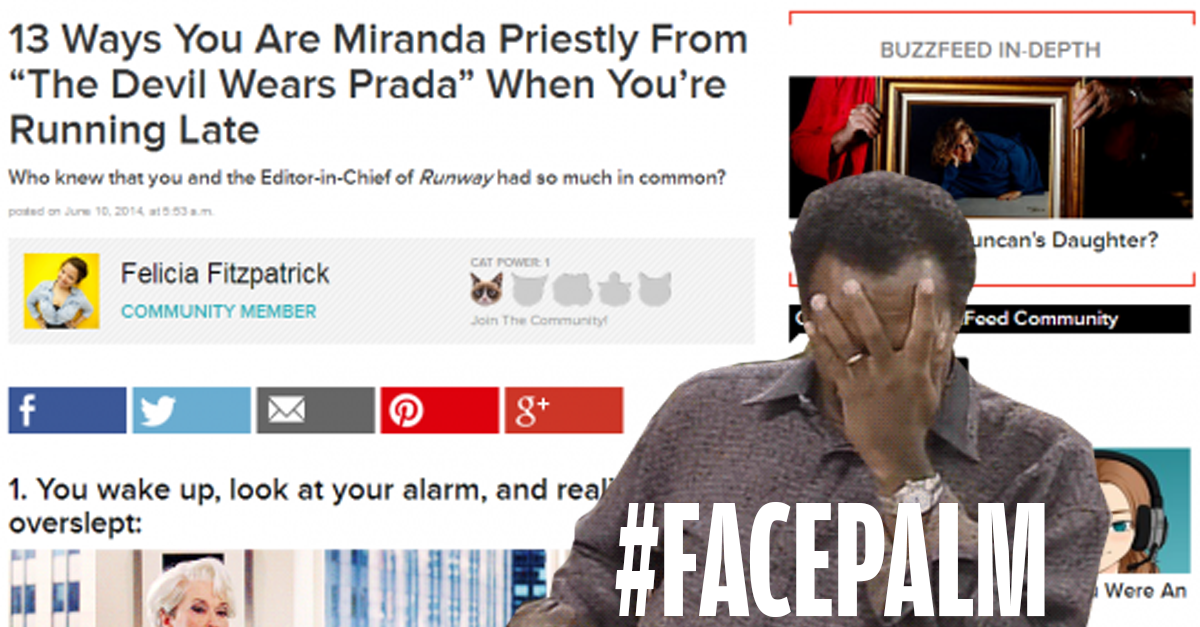 12 terrible BuzzFeed Community posts that will make you cringe

One big argument against “citizen journalism”

The problem with letting absolutely anyone write for you is that a lot of the time this means you’re publishing rubbish. Trust me, I work for The Tab.

BuzzFeed’s Community section lets registered users channel their #majorfeelz about cats, 90s pop hits, and childhood nostalgia into BuzzFeed-style articles of their own, a democratic process that allows everyone a voice on the site – even the British government.

Nearly all of these ‘fan-made’ posts end up buried under the hundreds of legitimate BuzzFeed articles that seem to be published every day, meaning they rarely get seen by anyone outside of a small circle made up of the author’s close friends and people who like to google for weird stuff.

Clearly, this isn’t fair. So, we’ve decided to go digging on an exploratory mission to bring you the best of the worst “user-generated” content that the future of the internet has to offer. You’re welcome. 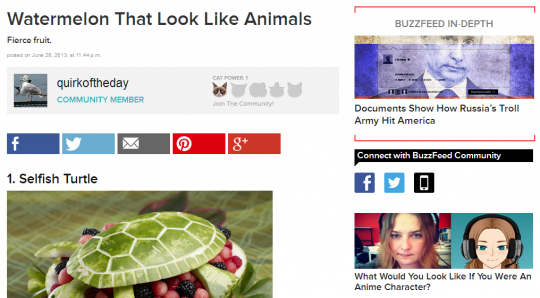 Watermelon or watermelons? Either way, this is a terrible idea

We’ll admit we weren’t sure if “watermelons” was actually the correct plural form for watermelon, but a quick straw poll and an internet search reveals that it probably makes more sense in this case than just saying watermelon.

Even if the headline were fully gramatically accurate, it’s a pale imitation of what makes a BuzzFeed article work. Hardly anyone is going to want to click on this, and those who do are going to be let down by what is ultimately just a collection of adequately carved watermelon(s). 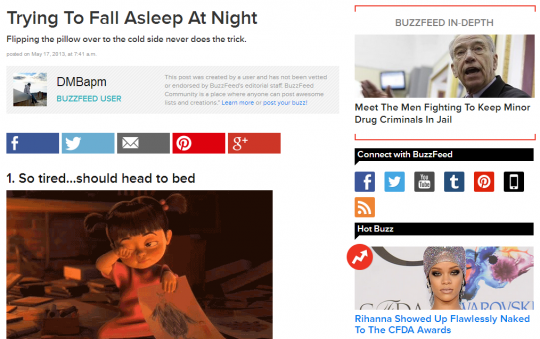 You do realise that’s only half a headline right?

Behold, a headline and a standfirst that tell you absolutely nothing about the rest of the article. The headline is essentially a status update, meaning if anyone saw this on Facebook they probably just ignored it.

Clearly not though as this one actually racked up a fair few views, presumably out of pity. Either that or there really are hundreds of thousands of people out there right now also trying to fall asleep at night. Probably those people who don’t shut up about their dreams and how they couldn’t sleep. 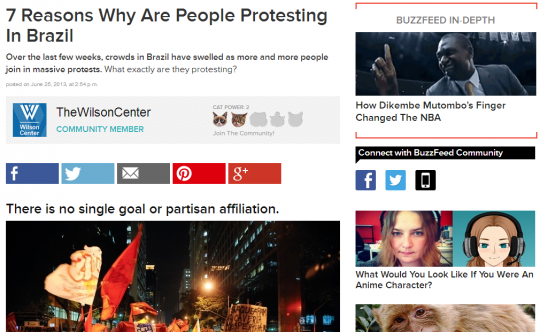 Kids, this is why you’re always told to check your work before handing it in. What makes this headline even more unforgivable is that it’s published by a company, not just a teenager with too much time on their hands.

No wonder people are still protesting in Brazil a year later when companies are this bad at explaining why it’s happening. 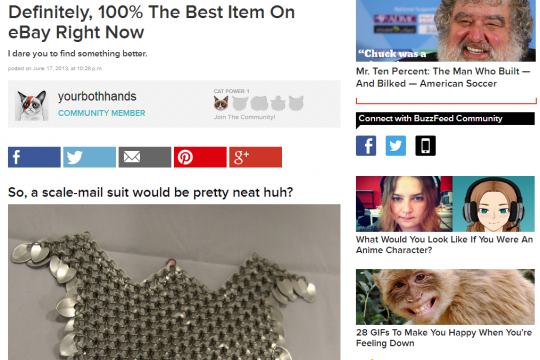 This has to be the author’s own eBay listing

Have you got an item you’re trying to sell on eBay without any luck? You should make a Buzzfeed community article about how awesome it is!

We’ve got no way of proving that the person who wrote this article is also the same person trying to sell a chain-mail suit for guinea pigs but ask yourself this: isn’t this immoral act exactly the kind of thing you’d expect from someone who owns guinea pig armour? 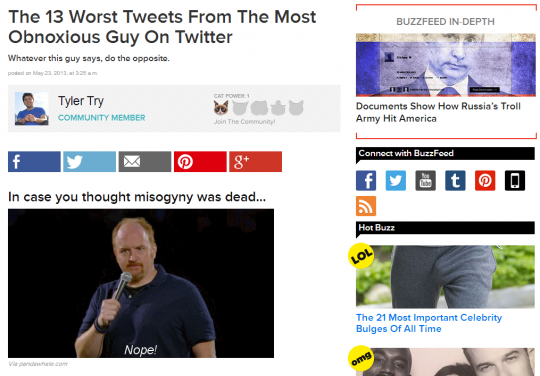 This is one way to get more followers…

You can just imagine it. Guy sets up hilarious, “ironic”, lad twitter account “for the bantz”, only to find not enough people are paying attention to it. In an attempt to stoke controversy, he turns to the viral hub of BuzzFeed.

Even if this guy isn’t the one behind this Twitter account, drawing attention to it like this is only going to give the guy a bigger audience. Did your mum never tell you to ignore bullies? 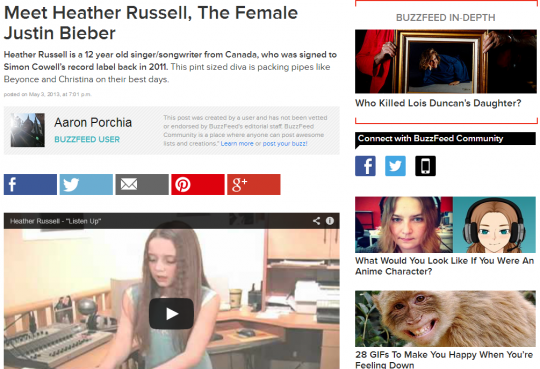 Poor Heather Russell, swallowed whole by the hype machine before she even had her first hit single. This person, probably a family friend given the difference in surname, just wanted to help little Heather on her way to stardom.

Unfortunately, the world didn’t listen. Maybe three decades later someone will uncover her unreleased bootlegs and she’ll be heralded as the great lost voice of her generation. Either that or she’ll do a Kate Nash and turn punk in a bid to stay relevant. 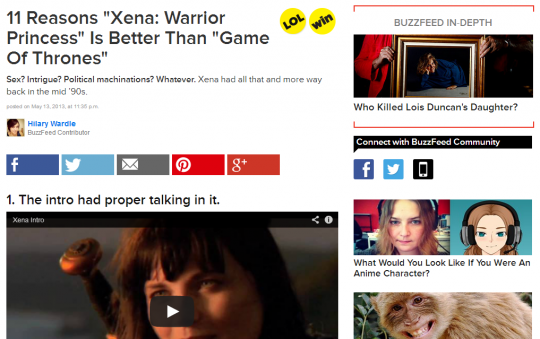 Finally, an article that says what we’ve all been thinking! Right?

Of course not. This article is a clear example of someone being annoyed because everyone else is talking about something they’ve not seen yet, so they’ve decided to channel their grandparents and tell you how good things were back in their day instead. Even though they’re wrong. 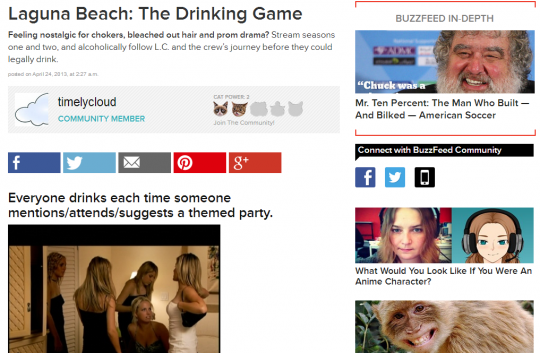 We forgot this was a TV show, but to be fair it is the exact kind of programme you need to get drunk in order to enjoy.

Drinking games are pathetic at the best of times; when they contain rules like ‘drink a shot when someone says “dunzo”‘, they’re an abomination. 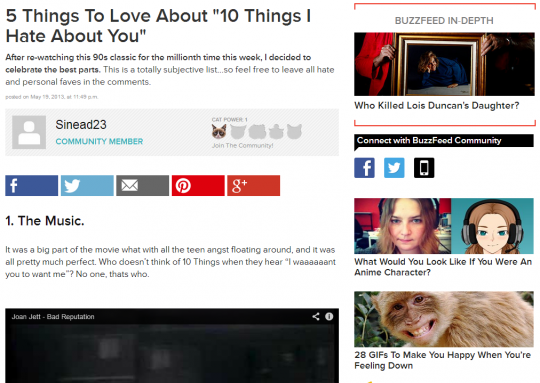 How can I fuck this up? Let me count the ways…

Here’s the thing, we like 10 Things I Hate About You. How could you not enjoy the sight of a young Joseph Gordon-Levitt and Heath Ledger attempting to win over the respective women of their dreams?

Which is why this list is so terrible. Five things? ONLY five things? How lazy was Sinead23 when they put this together? At least if they’d gone for 10 it would have matched the title of the film! 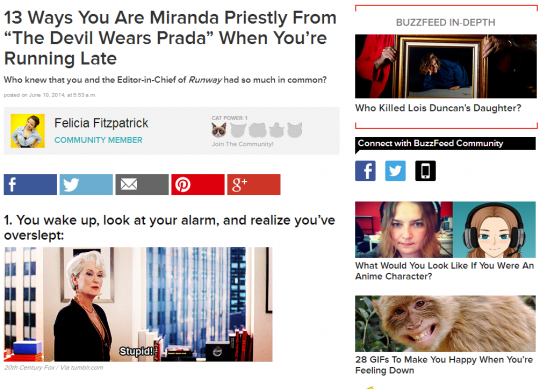 Take a supporting character from any film in the last ten years that’s based on a book and somewhat popular with young women, add a situation that doesn’t happen all that often to most people, and you’ve got yourself a BuzzFeed article.

Presumably that was the line of thinking here. We’ve not seen the film but does Miranda Priestly spend the whole film being late? That seems to be the only way this makes sense. 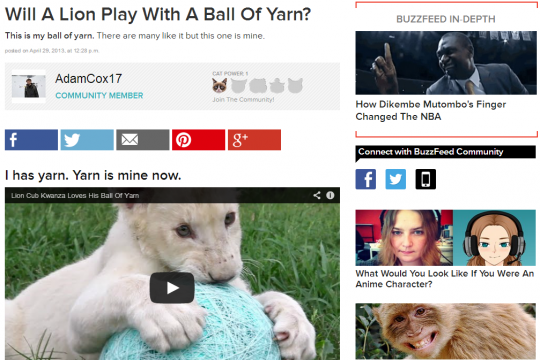 Yes, animals are cute, but this is a step too far

If your headline’s a question, I need to be at least slightly invested in the answer. Even if you’re the biggest animal-lover (or yarn-lover) on the planet, you probably know the answer to this question is going to be yes before you click.

It’s an unnecessarily suspenseful introduction to a cute video of a lion playing with yarn. AdamCox17 doesn’t seem to realise people would click on this regardless of the headline.

This is what happens when you try to be subversive 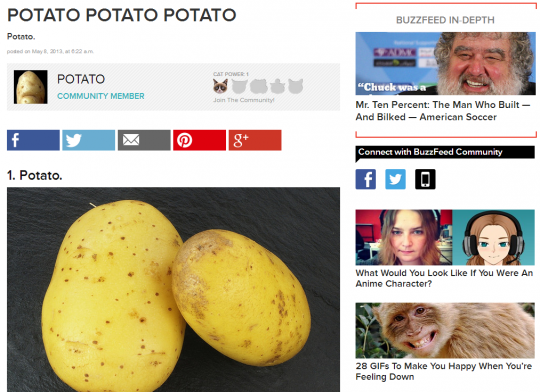 This article, containing the same picture of two potatoes over and over again, would never make it past a pitch meeting if BuzzFeed didn’t allow for user-generated content. It’s moronic, but it’s so moronic that it’s obviously trying to be clever.

Not convinced? Right near the end of the article, for no reason, this happens: 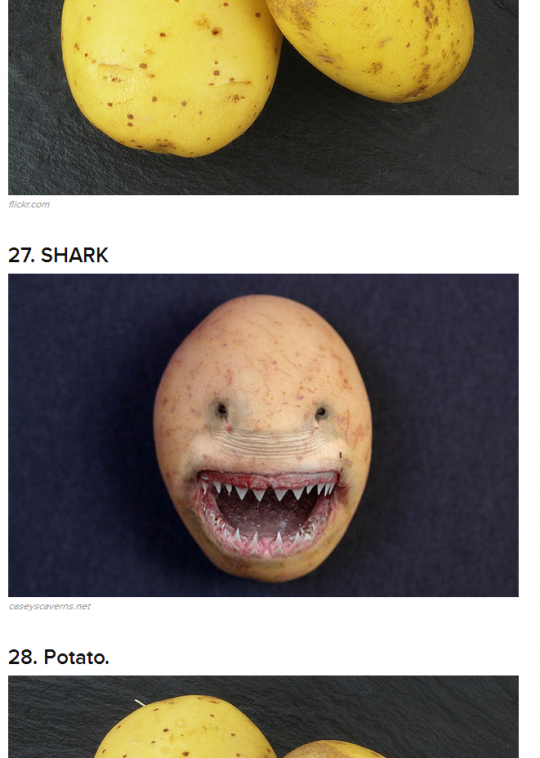 There are no words.

It’s silly, the kind of thing that twat from your course who always shares memes in the email chain would find funny. The fact people are spending more time on shit like this than stuff that’s actually important is criminal.