Stephen Hawking goes all fruity as he parties with a stag do.

This is the bizarre moment world-famous physicist Stephen Hawking joined fancy-dress revellers on a stag do.

Chris Hallam, 29, and ten pals had gone out all dressed as Bananaman for a boozy night on the town in Cambridge.

The group turned a corner and bumped into Stephen Hawking getting out of his car.

And they were stunned when the Brief History of Time author agreed to pose with them for a souvenir photo. 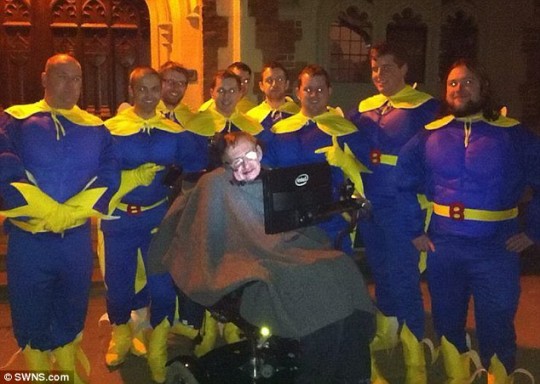 Stephen is our Super Hero

Chris, a self-employed builder from Norwich, said: “We only came across Professor Hawking because we were lost.

“We were just looking for a bar and spotted him getting out of his car.

“His son was with him and asking him ‘Should we ditch the meal and go out with these boys?’

“They could have just told us to carry on but they were all brilliant.

“It’s been mad. People just keep saying ‘I can’t believe it, is it really him?”

Father-of-one Chris is due to marry fiance Kizzy Davis, 34, on March 29 and says he will never forget his stag.

Prof Hawking is no stranger to stag dos, having admitted to going on them to strip clubs while lecturing in California.