Your business probably won’t happen if you’re sitting in your pants at home. Check out some of London’s best places to grab an ad-hoc desk.

Google started in a garage. But your founder story – starting a business sitting in your bedroom in your pants – is unlikely to acquire the same mythological status. It just doesn’t have the same air of plucky, against-all-odds glamour. Note: no story about you in your pants will ever attain this glamour.

Why not try hot-desking? That means grabbing a space at a number of dedicated spaces across London where you can informally rent a desk for a period of time and then have an office to go to.

Check out our guide to the top hot-desking resources.

Founded in 2013 by seed fund and serial entrepreneurs, #1seed, GoCoWo is a curated map that shows all of the startup spaces in London and gives you information the startups based there. Described by entrepreneur-in-residence Jordan Schilpf as a philanthropic project, GoCoWo isn’t intended for profit –  but as a product that ‘gives back to the startup community’. The team at #1seed couldn’t believe it didn’t already exist. The site is currently in what Jordan calls ‘version 1’, but developments are planned: they hope that the site could become a directory for startups, opening the London startup scene up to investors, journalists and wannabe entrepreneurs.

Firstly: why the need? Jordan says it came from the community: the startup scene is more collaborative than it is competitive, and so it’s logical to look for space with people who might work as a sounding-board for your ideas, or with whom you can establish a reciprocal (i.e. ‘I’ll scratch your back, you scratch mine’) relationship. It makes the startup scene transparent, which might alter its landscape: if you want to launch an e-commerce site and notice that e-commerce startups are clustering in one area, it makes sense to apply for workspace there, which perpetuates the specialism-by-area. An interesting idea.

It also makes sense to be working among businesses who are at the same stage you are: it’s going to be fruitless at best and demoralising at worst to be working alongside a team that’s about to turn a profit when you’ve just managed to get your first Twitter follower who isn’t a member of your family.

Currently working in London with possible international ambitions: Jordan says, ‘We’re responsive to what the community wants. There’s scope for it to be an estimable resource for the London startup community and beyond’. There’s been interest from New York, but Jordan cites Berlin as more likely.

Anyone looking to be clever about where they work. When you’re in the earliest stage, who you know can be very important. GoCoWo empowers you to network with the right people – without having to attend a networking event full of gauche bullshitters. 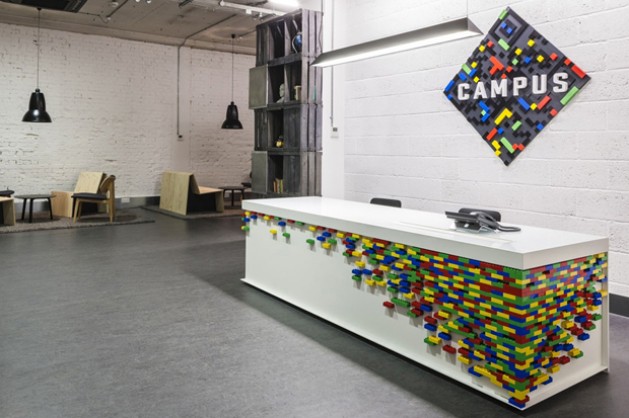 Campus London sounds like a sort of utopia until you hear it’s in East London: it’s a ‘co-working space and entrepreneur community’. Basically it’s a room full of people interested in tech, with the idealistic aim that they’ll collaborate and inspire each other. The Campus is open between 8.30am and midnight, and runs a busy schedule of networking events and debates. Membership options are accommodating if you’re a startup looking for office space: you can pay £375 + VAT for annual flexi membership (anticipating using the space one or two days a week), £7.50 per square foot per member for team membership, or £275 per month for resident membership (on the assumption you’ll be using your desk a lot). If you don’t have the money – register on the Campus website for free in order to gain access to the Campus cafe (ZOMG free wifi!!!!). Founded by Google, Campus continues to partner with industry hitters including Seedcamp (see below), which provides seed funding for startups.

Find out more online at campuslondon.com.

Stay tuned for more updates from The Tab’s startup section: identifying the funds, the people and the how-to-guides you need to get your business off the ground.