Last Sunday (21st April) saw thousands of people flock to London to endure the 26.2 miles that is the 2013 London Marathon

The sunny streets of London were shown to be flooded with spectators encouraging the runners.

Despite the calm of Cathays during the early Sunday morning, one Welsh born beauty was at the Marathon, managing to raise a very impressive £25,000 for Macmillan Cancer Research. 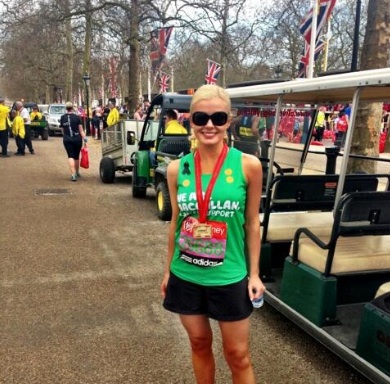 Preparing for the big race

Yes, Katherine Jenkins did herself proud, completing the hefty 26.2 miles in 5 hours and 26 minutes.

However, despite what The Tab Cardiff would see as a fantastic achievement, The Daily Mail seemed a little less impressed by Katherine’s turnout.

In a column for the daily newspaper, Jan Moir accuses the opera star of appearing too glamorous for the run. The article notes Katherine’s ‘lashings of pink lip gloss, sooty false eyelashes’ as well as ‘her blonde hair pulled back into an immaculate ponytail’. 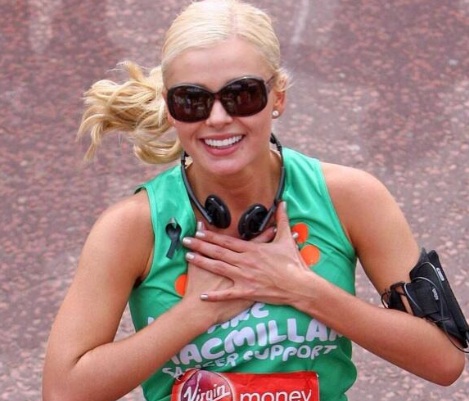 Debates sparked on Twitter, as people criticised Moir for her comments. On her own Twitter page Katherine wrote, “Jan (Moir) I wish you love & happiness in your life. I adore & support other women and I only wish you could do the same…”.

And as recently as yesterday (24th April) Katherine retweeted a link to a petition that has been started by the public to get Moir to complete the 2014 London Marathon.

Katherine seems to have got the greater support on this one. It just shows, a little bit of glam goes a long way in making you feel that bit more confident, especially if you are tipped to be broadcast on national television! 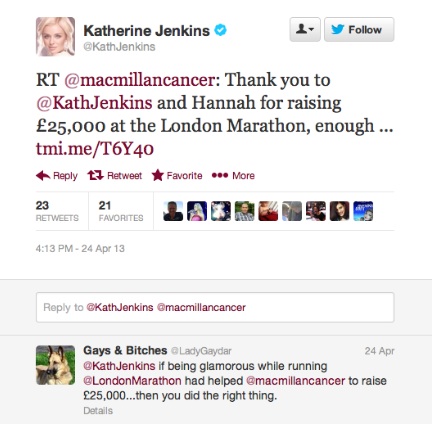 Despite the Mail’s comments, Katherine raised an amazing amount of money for charity by completely the 26.2 miles and managed to look beautiful and sweat free when she crossed the finish line!