The 2013 Welsh Varsity Rugby Game will be long remembered for the breathtaking thrill on the pitch, the charming performance of the two teams’ cheerleading squads and… the half-time streaker who made the 13,000 strong Millennium Stadium crowd erupt.

As if the performances from the Cardiff Snake Charmers and Swansea Sirens were’t enough, a naked Cardiff University supporter snuck onto the field during half time. 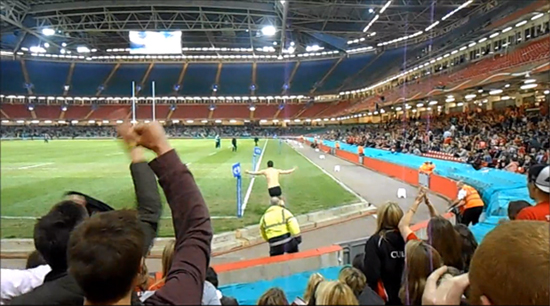 The great escape… lad makes for the field

The fan aptly avoided a steward in the stadium’s West stand, where a strong Cardiff Uni crowd was based.

The intrepid supporter then rushed onto the pitch, removing his pants and slipping over with hilarious effect.

It wasn’t long before he was held back by stadium staff. Nice tackle, we have to say! 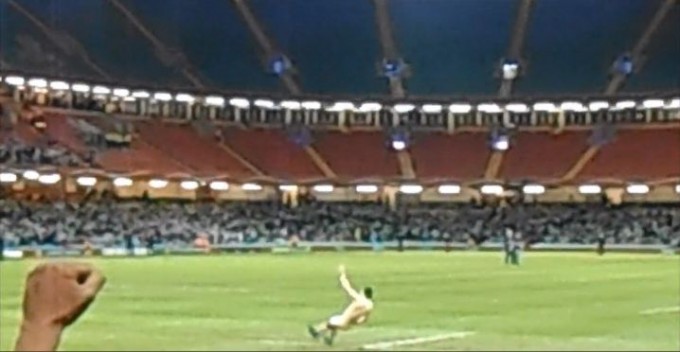 Woopsie! Streaker lands on his bum

The game itself started off with quick exchange of turnovers between the two teams, but it was Cardiff who first took the lead after converting a penalty in the 14 min.

The home team continued to exert constant pressure on Swansea and by half time the result was 10-0 for Cardiff.

Swansea opened up their play in the second half and fought their way back to win the game by 13-21.

The Swans made Cardiff’s dream of a second consecutive win fade away by claiming their 11th Varsity trophy.