Singer has been accused of pedophilia

A petition on change.org created by several cinema students demands the removal of Bryan Singer's name from the School of Cinematic Arts.

The petition has harbored over 2,300 signatures and counting.

The post on change.org says, "Despite Singer’s philanthropic work for SCA, having his name attached to a division of the School of Cinematic Arts gives the impression that we, both as an institution and as members of the entertainment industry, value his financial contributions over the safety, respect and future of students.

"It sets a precedent of lenience for sexual criminals and further undermines the visibility and respect that victims of harassment and assault deserve."

In 2013, Singer donated $5 million to SCA and in turn, the institution put his name on the Division of Cinema & Media Studies. Singer attended the university from 1986-1988 and then went on to direct and produce several films and television shows, including all five X-Men movies. 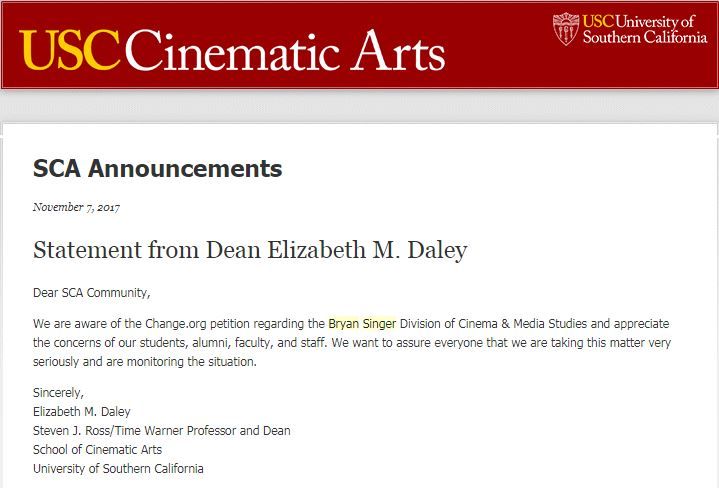 In response to the students' outcry, SCA Dean Elizabeth M. Daley announced in an email to the SCA community that she is aware of the petition. Daley said, "we want to assure everyone that we are taking this matter very seriously and are monitoring the situation."

The writers of the petition are hopeful that the SCA administration will remove Singer's association with the school similarly to how they declined Harvey Weinstein's $5 million donation.