Philadelphia’s branch of 15Now, an activist group launched in January of 2014 in Seattle to fight for an increase to the minimum wage, is holding a protest today outside Sullivan Hall to condemn Temple’s plans to build a new stadium on campus.

Last week Temple Student Government held a meeting to address students’ questions and concerns about the stadium plans, and a number of students used the platform to protest.

The protest is happening outside the hall where Temple’s Board of Trustees will simultaneously hold its scheduled open meeting with residents of the community to allow them to express their opinions and concerns about the stadium’s impact on the area.

The protests have ended. They ended by calling for mass escalation and said this is only the beginning.

Protesters are walking to the back entrance.

A part of the board was escorted out.

Protesters are linking arms and being pushed.

Media who were allowed into the building just left.

Protesters are waiting at each exit of Sullivan hall. 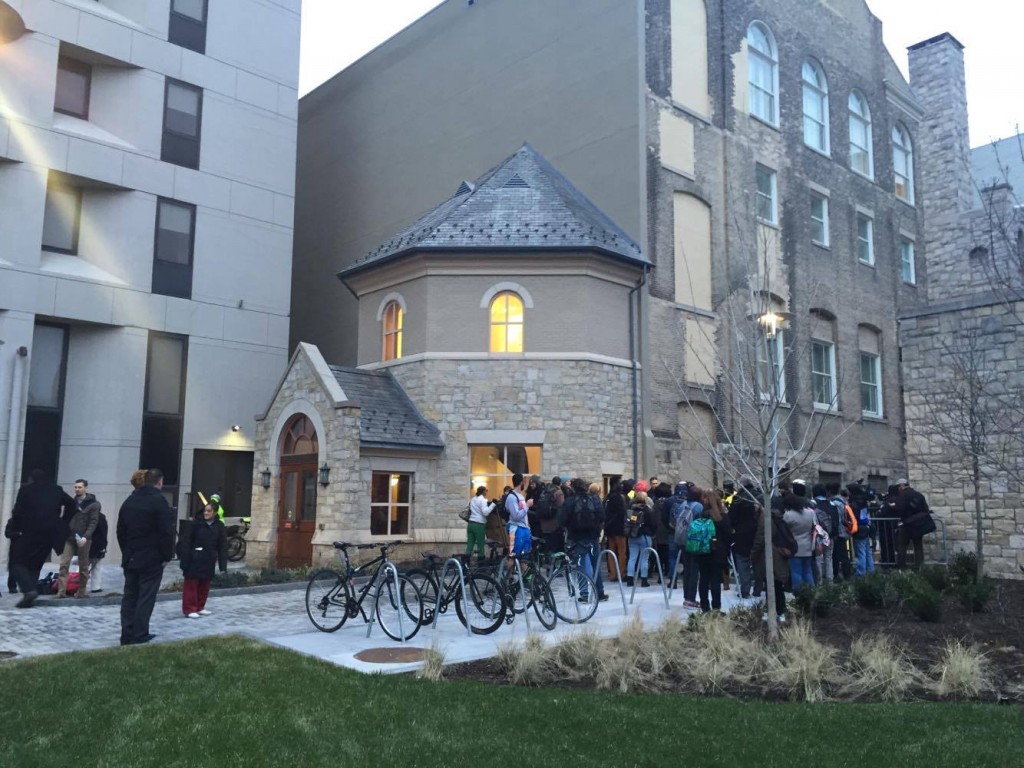 “We are the people, the mighty mighty people”

“We are the students, the mighty mighty students”

“We are the community, the mighty mighty community”

Protesters chant “Who do you protect, who do you serve” at security. 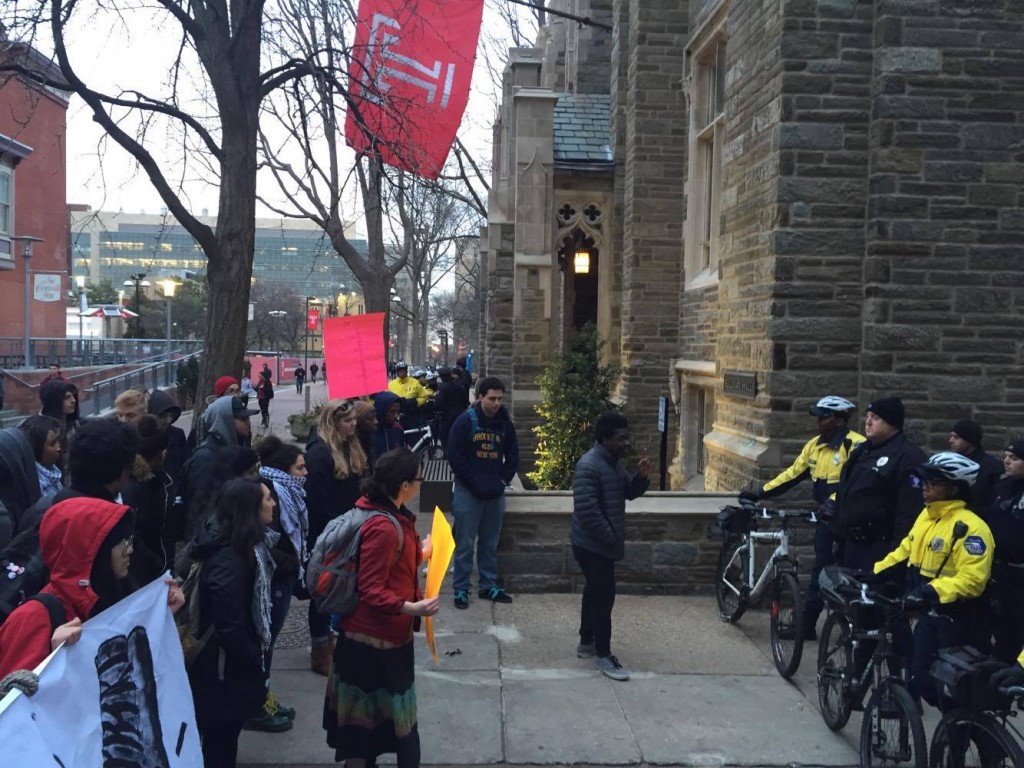 While protesters are talking at the officers students are walking by yelling “up with the stadium”.

Protesters are talking directly to officers.

“Who are you helping?”

“Who are you serving?”

“Who are you protecting and serving?” 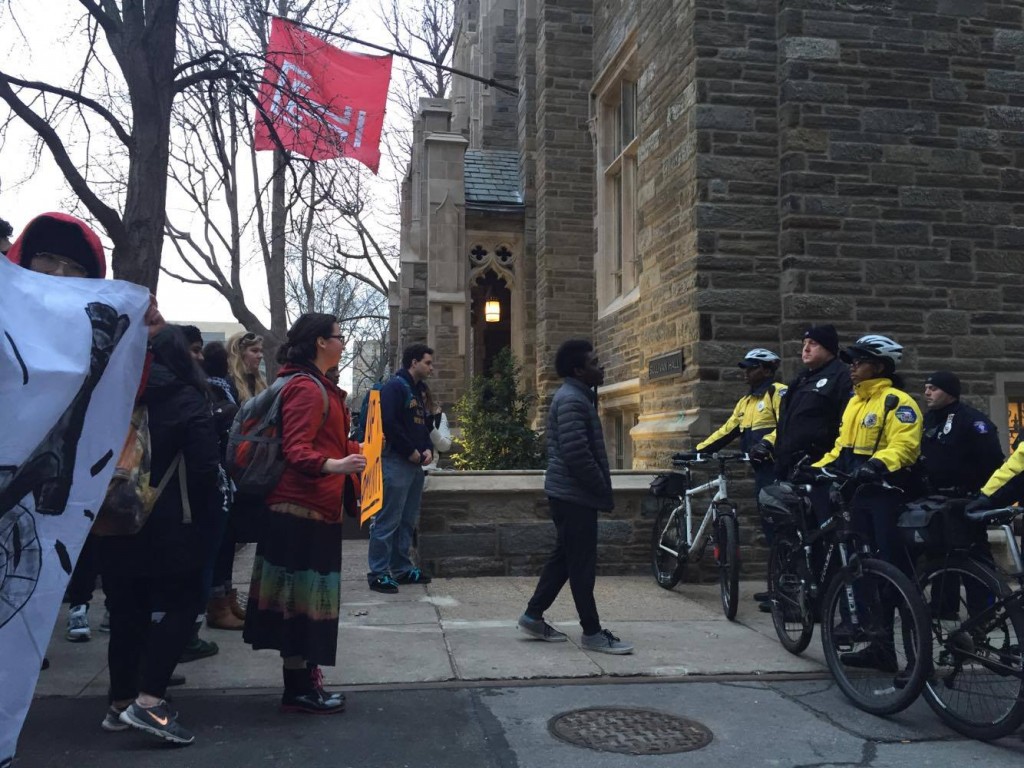 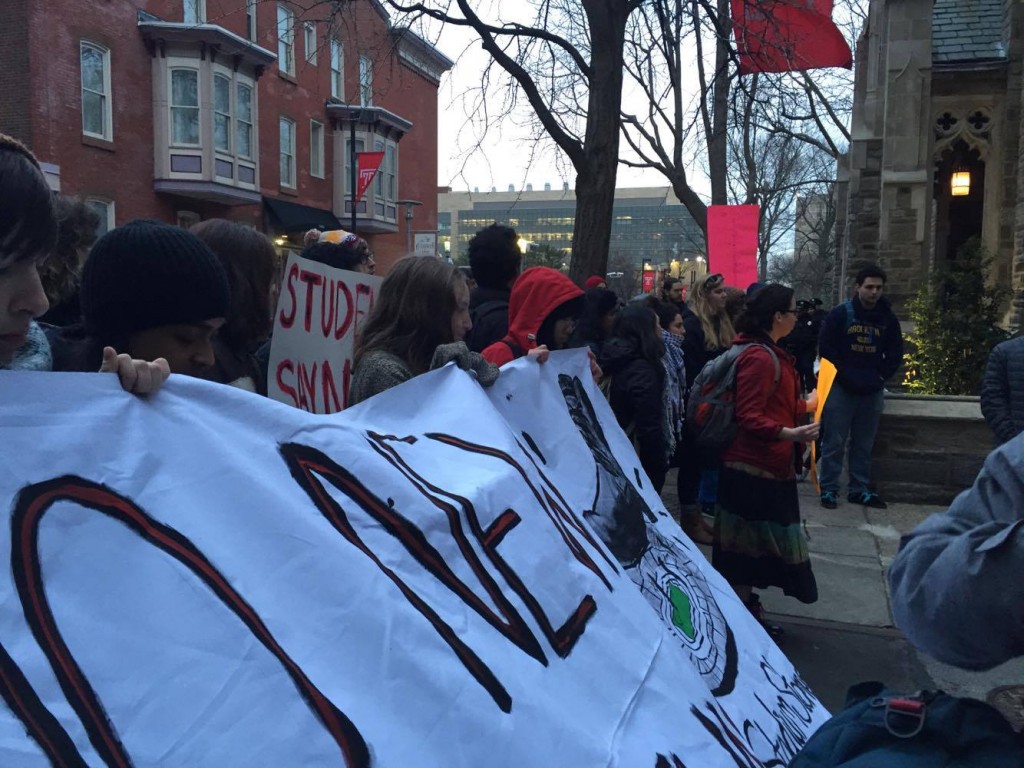 Board members are now leaving the building and are being escorted out by bike security. 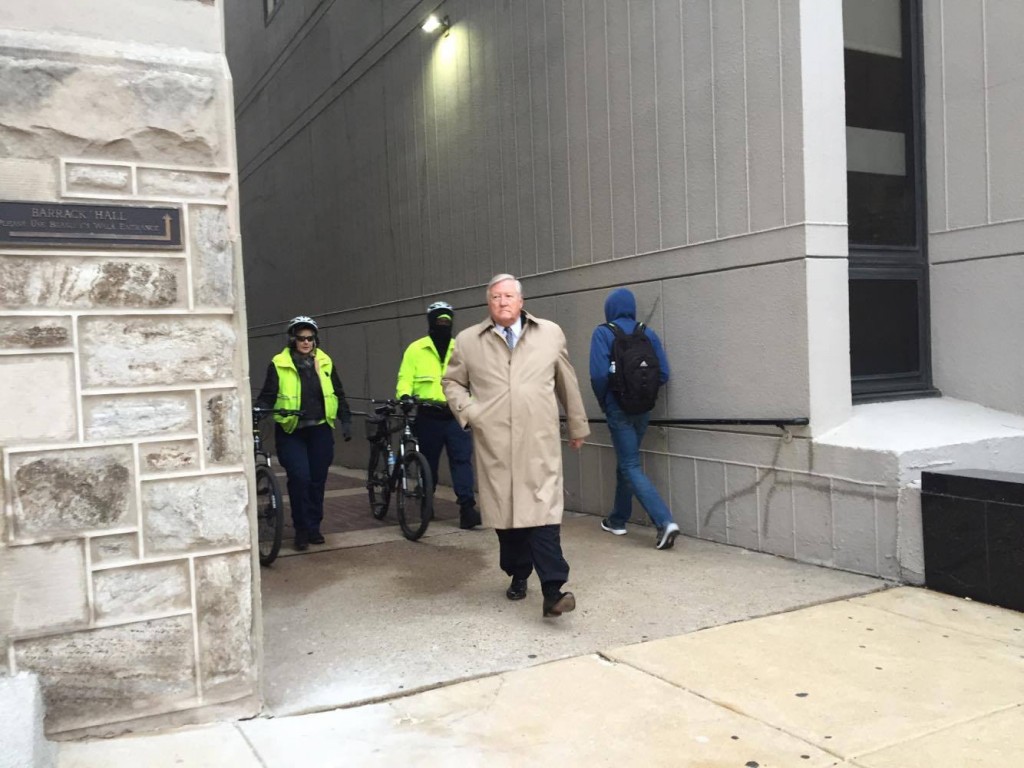 Community members are leaving the meeting. 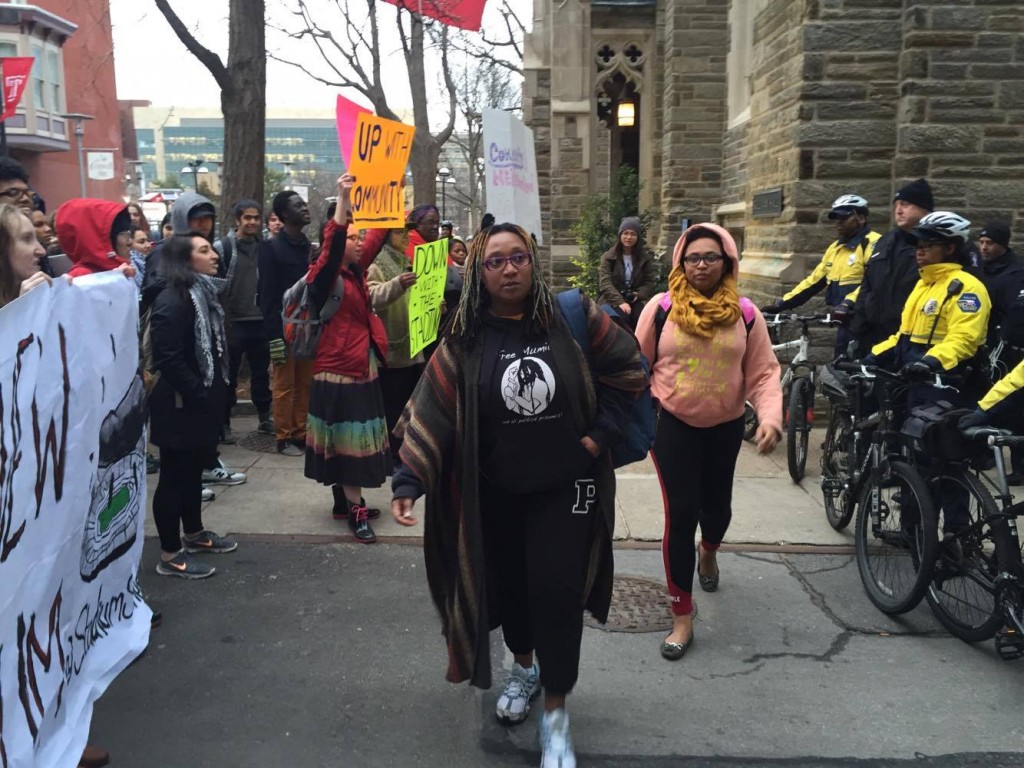 Protesters are turning around the banner and signs to face the police line in front of the door. 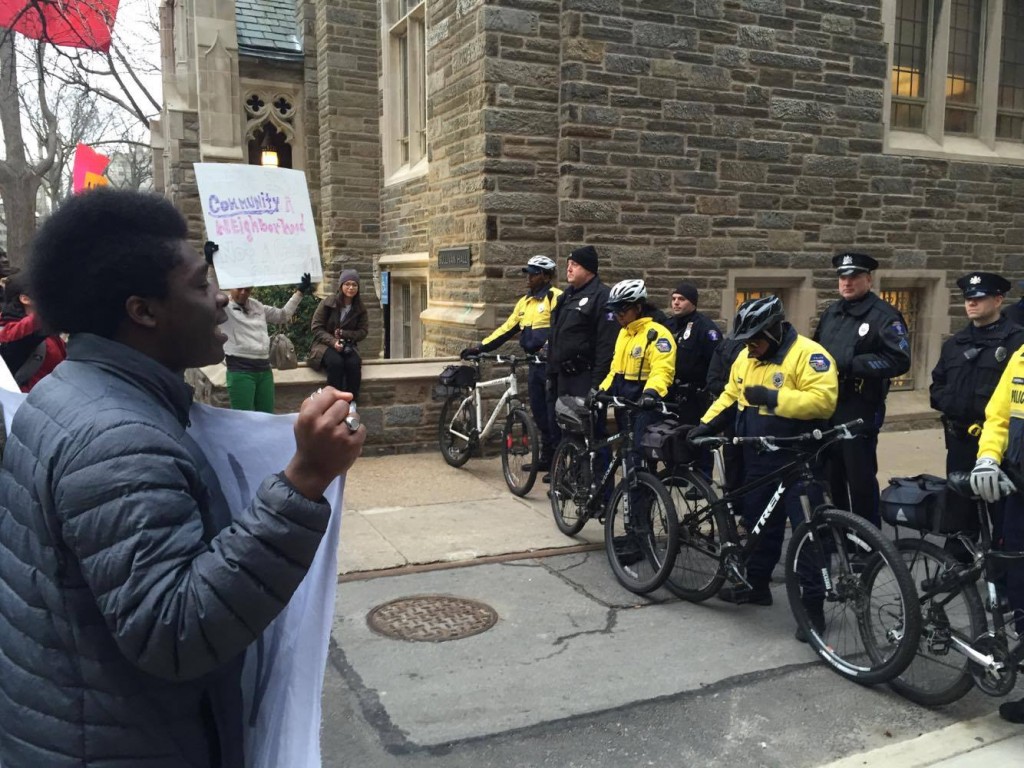 “A bunch of us are gonna stay out here and let the board of trustees know what we’ve been saying out here, since they won’t let us in there.”

Police and security have been standing by quietly listening during the protest.

“We need a debt free college. We need a sexual assault center. We need a higher wage for our workers because we live in this community.”

A union member speaks out for:
“Social unionism, in which the unions do what the community wants.” 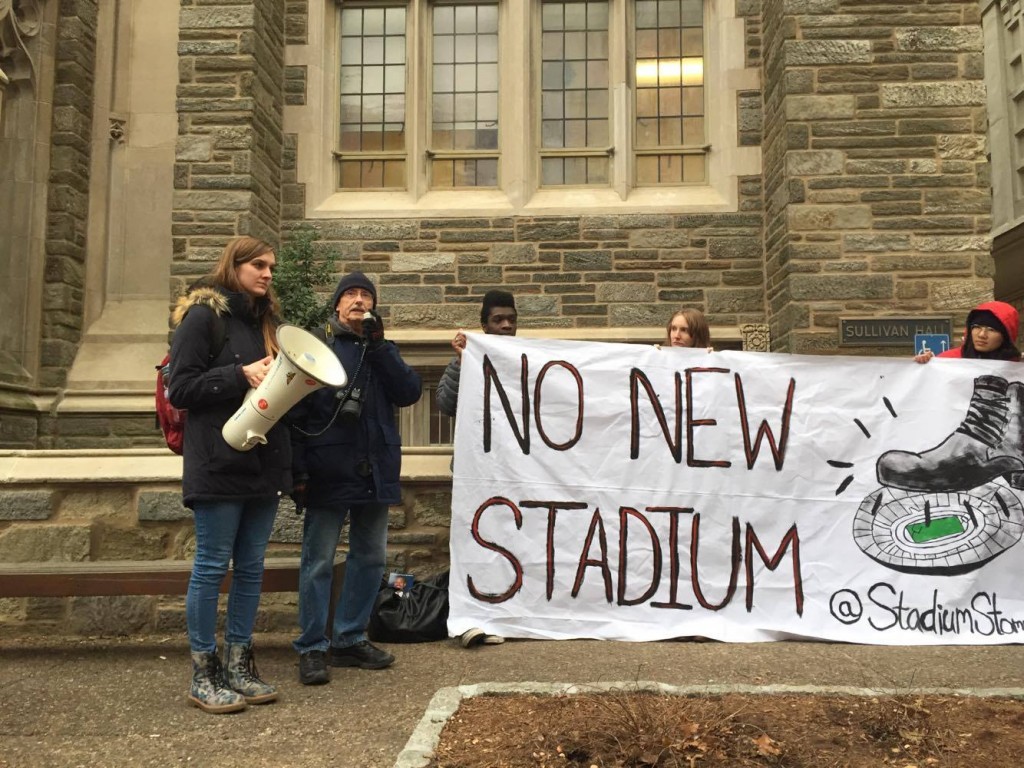 Protesters talk about how there are bigger issues that need taking care of.

“Sports are fun…but we don’t need that right now.”

“That’s them moving out a family, because they want to play football,” says a member of the community.

The protest will be wrapping up within the next few minutes, but they plan to stay here and wait until people exit the meeting inside the building.

“Up with community, down with the stadium,” chant starts up again.

“We’ve been here a long time. We’re not leaving. This is my home. We’re staying.” 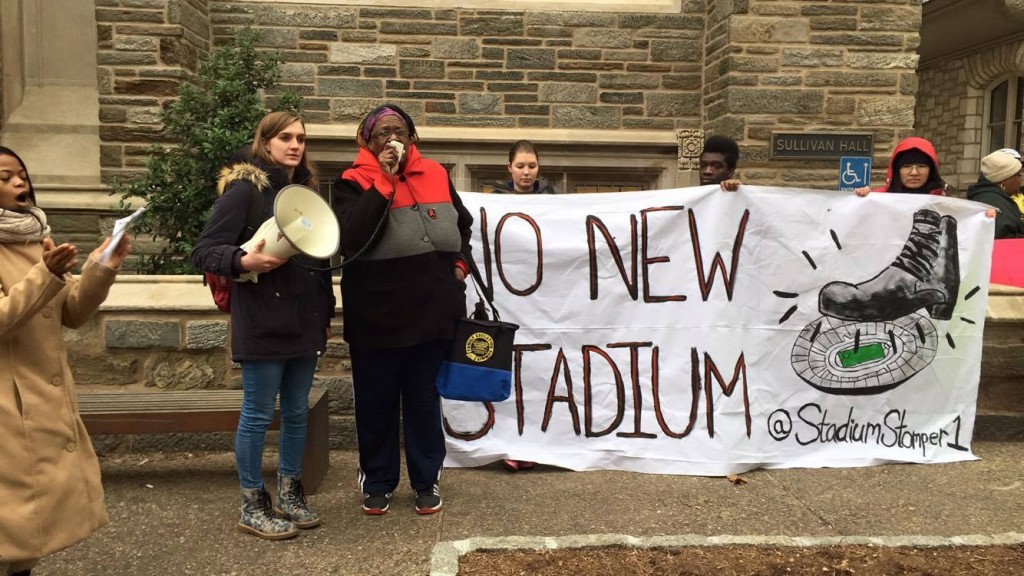 Lola Blount, who works at a playground at 16th and Berks, is now speaking.

“No bullying. That’s what we teach our children.”

Says she’s speaking on behalf of her children.

The sign was made by five and 12 year olds from Amos after school program. The plans would eliminate their facility. 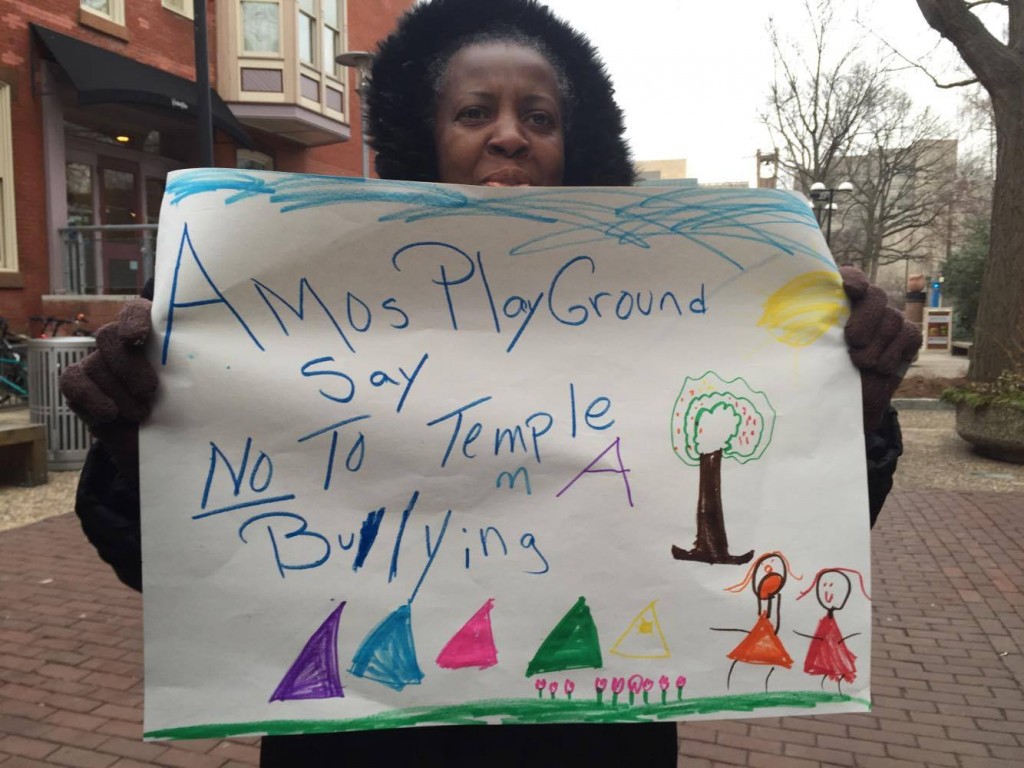 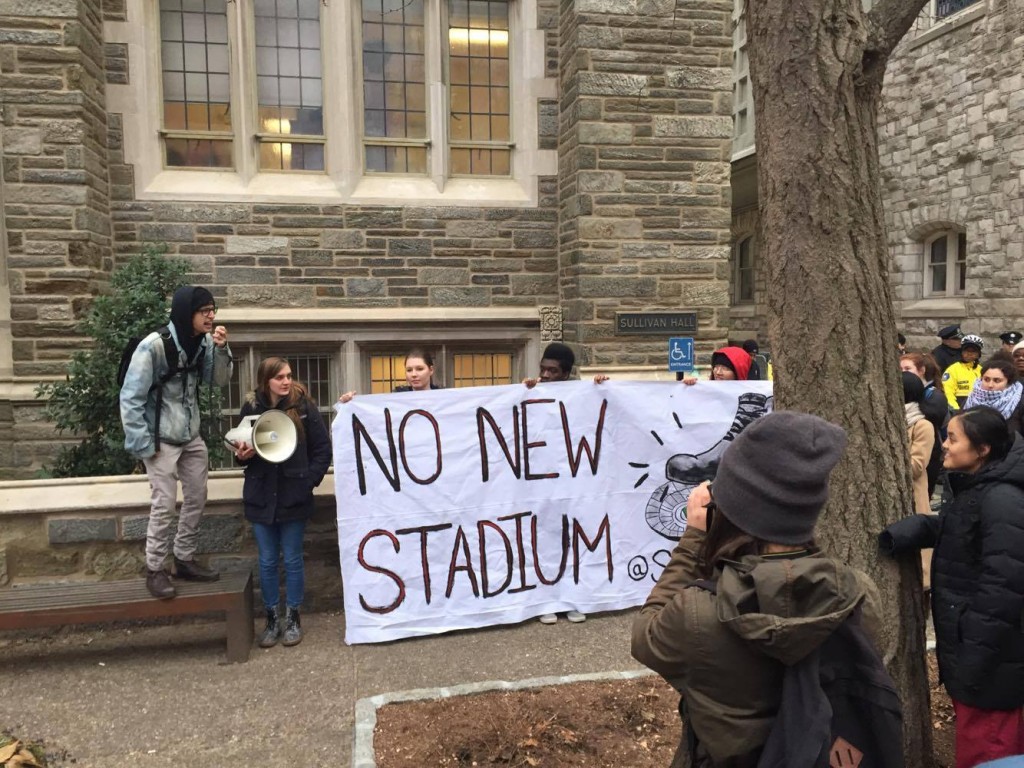 Jacqueline Wiggins and Ruth Birchett are still protesting from their car. 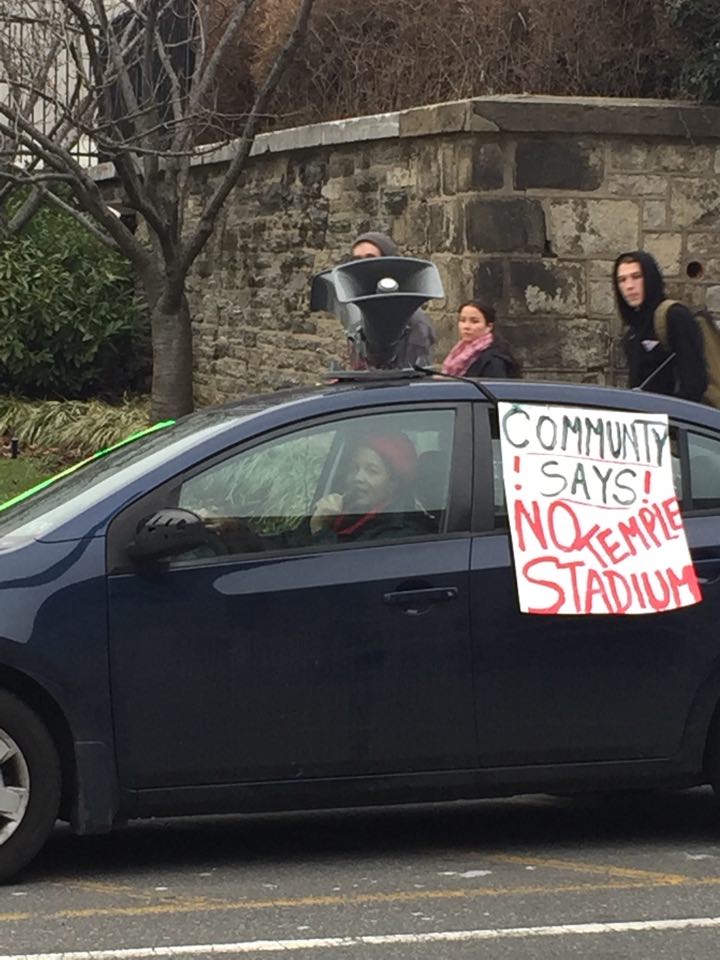 “We must stick together. We must get the message out to the community. By any means necessary!”

“We need representation in this community.” 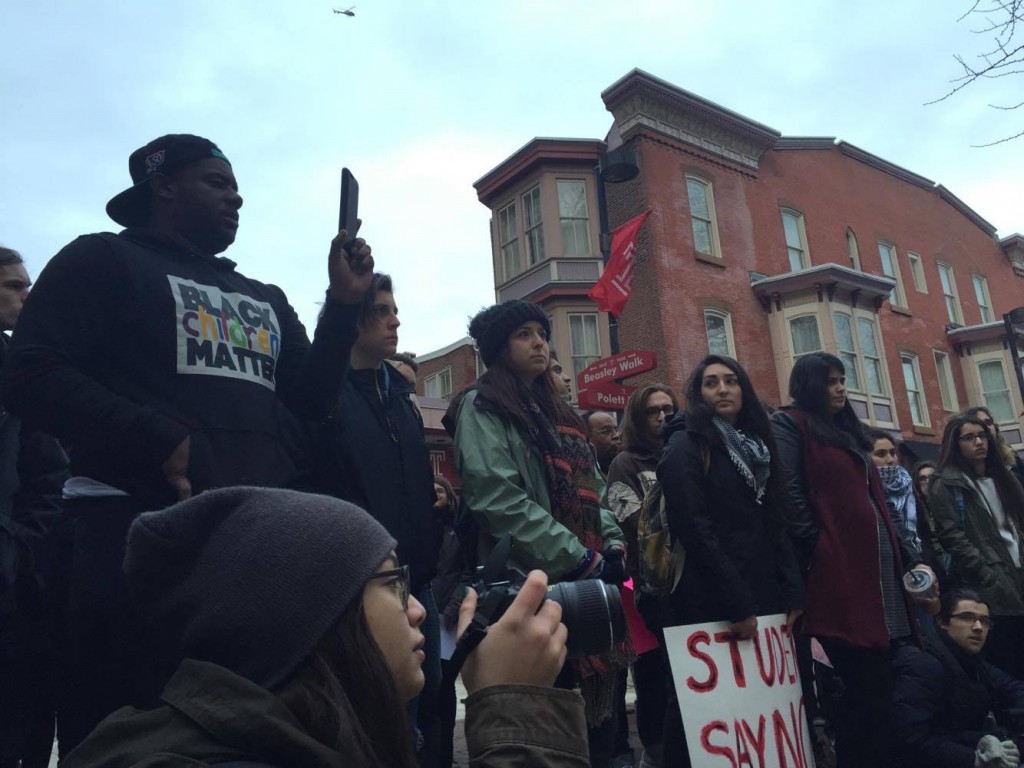 There is now an open floor for anyone to speak.

Following the Adjunct Professor a community member speaks up.

“It seems like they’re playing monopoly with people’s livelihood.” 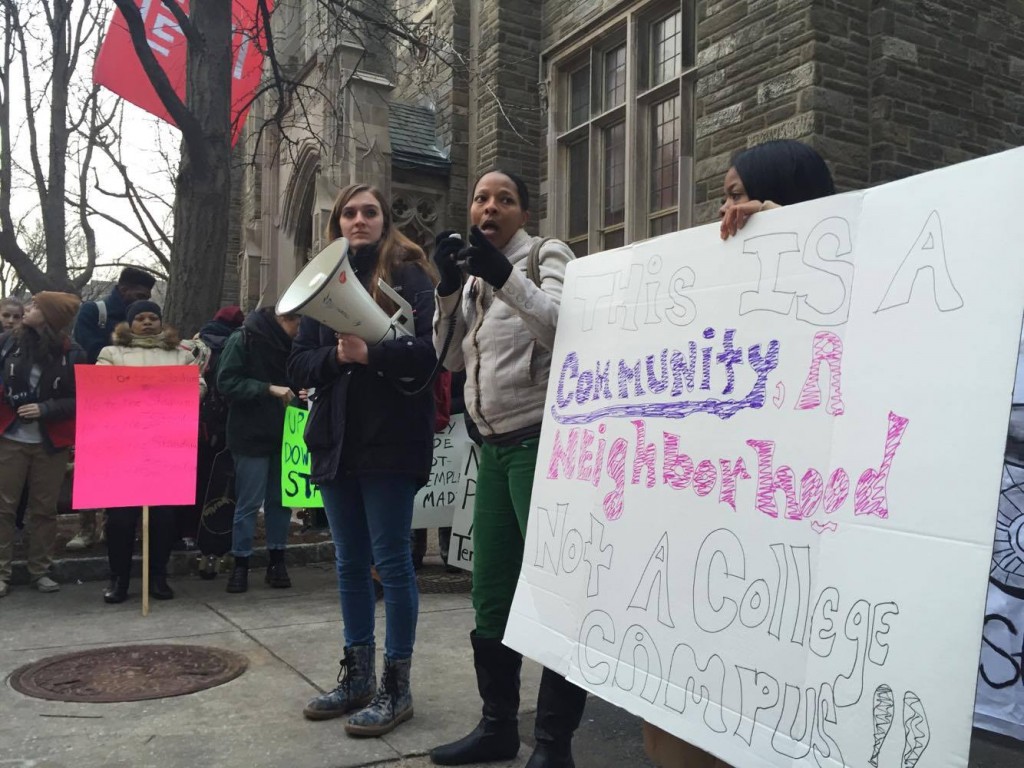 A helicopter can be heard overhead.

People start to chant “North Philly made, not Temple made”.

Tina Ngo: “Temple was under reporting sexual assault cases that had been brought to their attention.”

People have started to chant: “The people, united, will never be defeated”.

“You are not going to take over North Philly.” 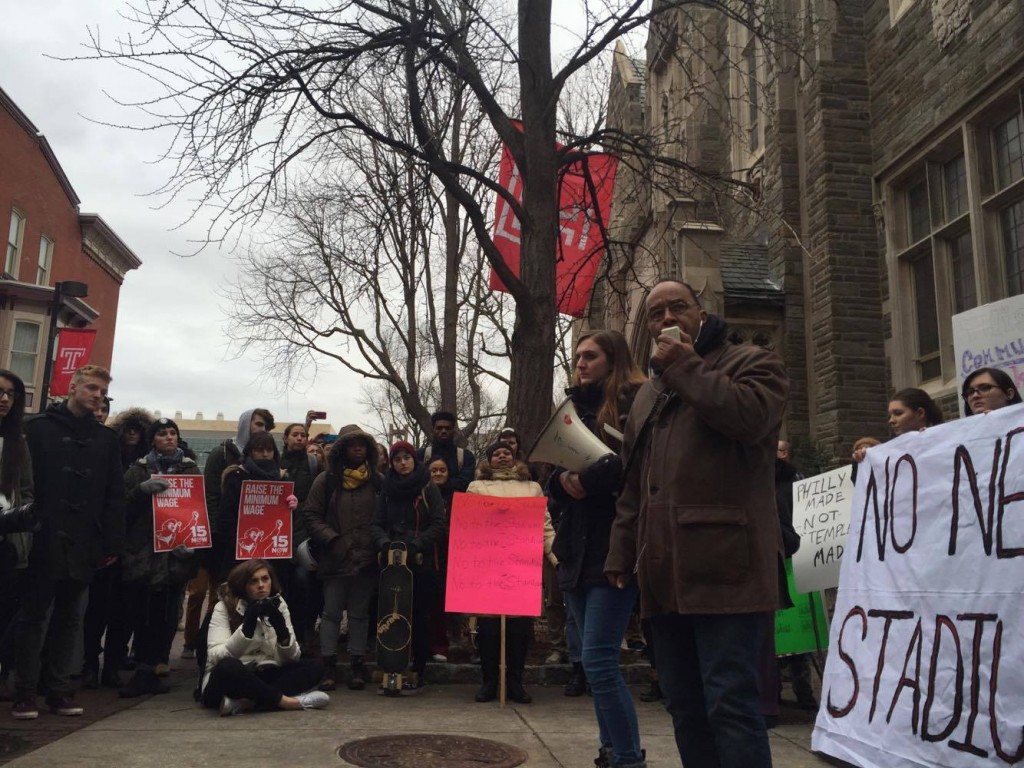 Dr. Tony Monteiro, a former Temple professor, is now talking about a meeting here a while ago about an unjust firing.

“Do you think Temple is being a good neighbor right now?”
Resounding answer from everyone: “NO”

Pastor of the church of 18th and diamond, Church of the Advocate. 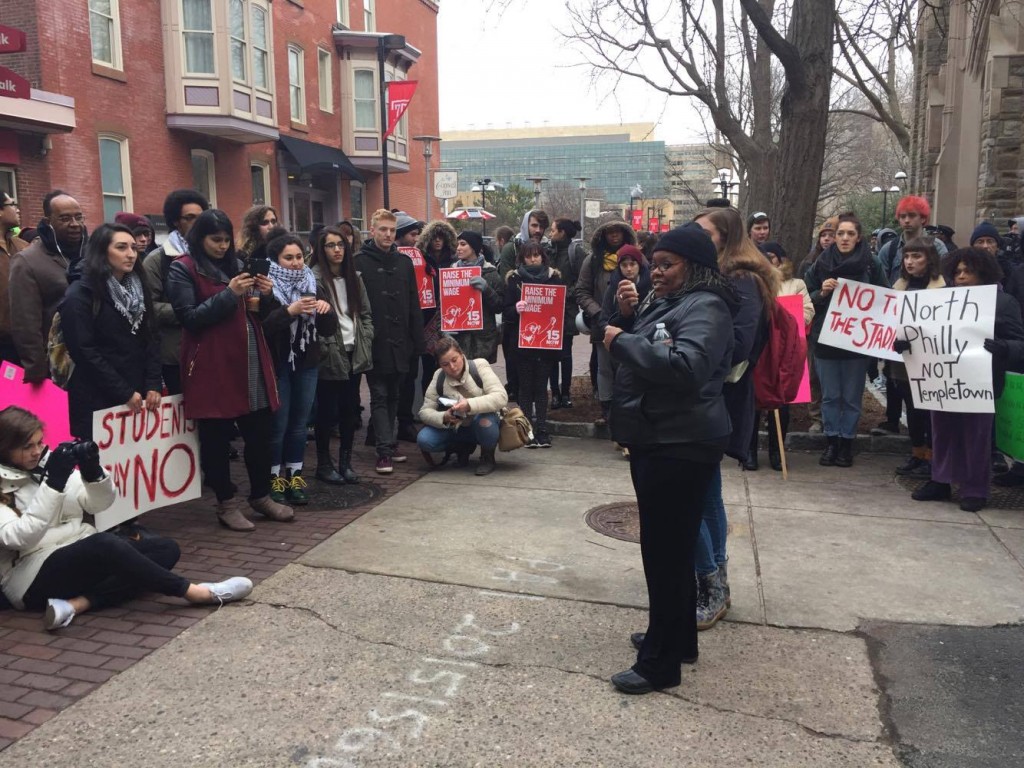 Students and community and faculty come together to say enough is enough.

“Enough is enough” chant starts to echo through the crowd. 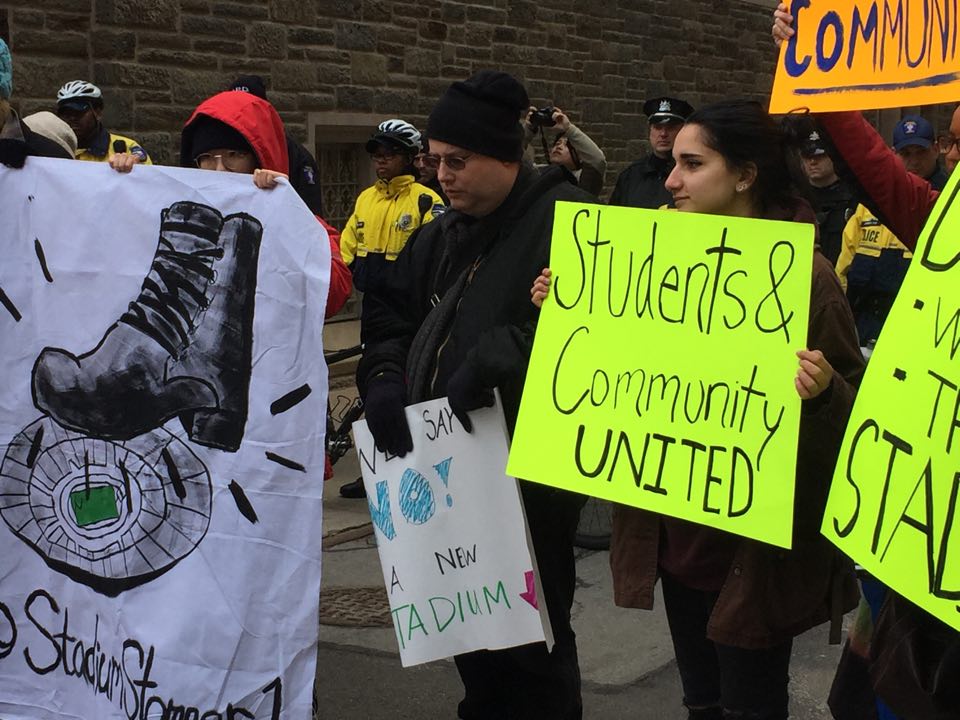 Protesters urge everyone to attend Church of the Advocate meetings every month.

They have started chanting “up with community, down with the stadium” again.

Protesters read out a list with the reasons they oppose the stadium.

Both community members and students are speaking for Stadium Stompers.

“A small percent of Temple students have plagued our community. . . With destruction of our property. . . Placing senior citizens and elderly at risk.” 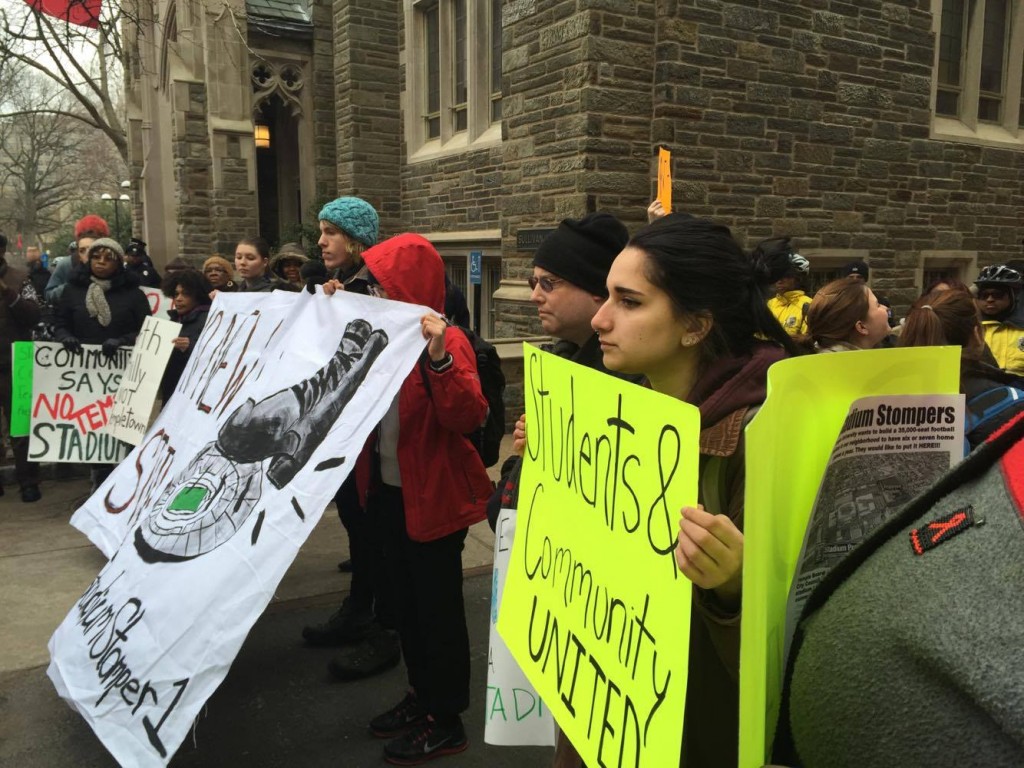 While a man still shouts at the police, another protester speaks out.

“These community leaders do not want a football stadium in the community.”

People have started shouting to police through a bullhorn chanting “Let them in.”

“They don’t want any more screaming young people in their backyard on a Friday night.”

Hundreds have gathered to witness the protest. 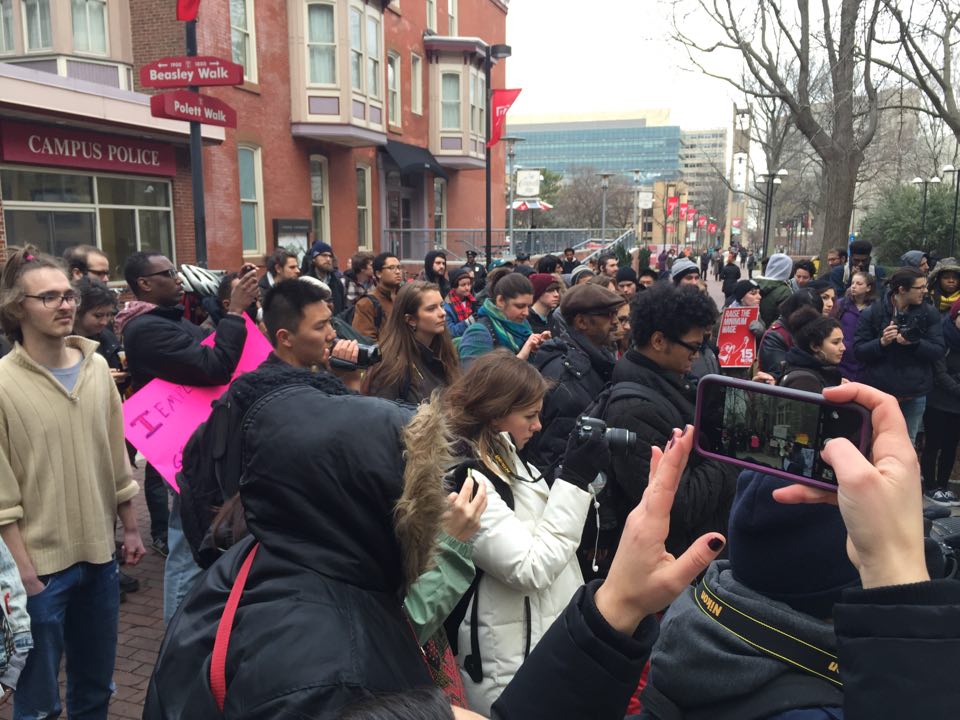 “If Temple is bent on not raising wages of workers, that won’t help.”

“Football is fun, but we need to think about the community.”

Next speaker is Phil, a sophomore English major at Temple with 15Now. 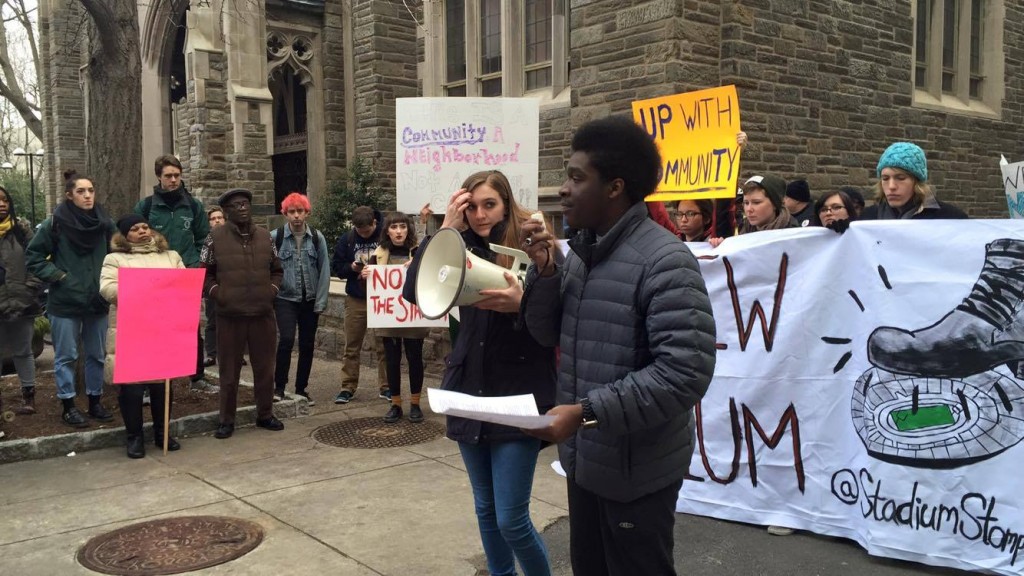 Students claim the questions at last week’s open discussion were not randomly selected.

“There were no community leaders at the table when this plan was proposed.”

Protesters have started chanting “Up with community, down with the stadium.”

Protestors are quietly standing right in front of the police line. 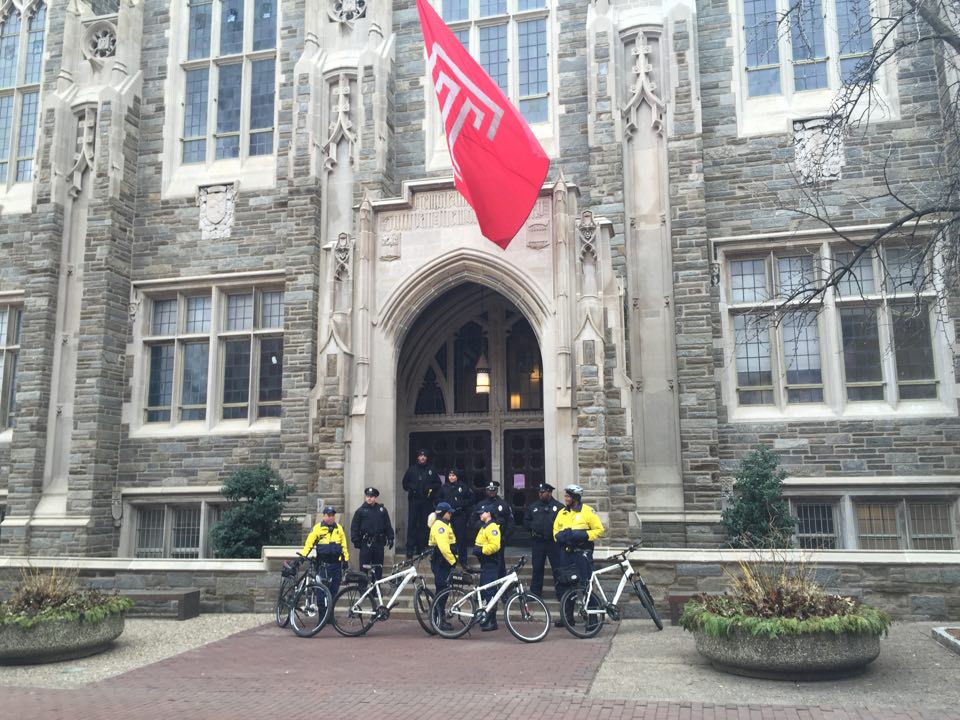 Channel 3 is there and is interviewing the protesters.

Students are handing out signs to others. 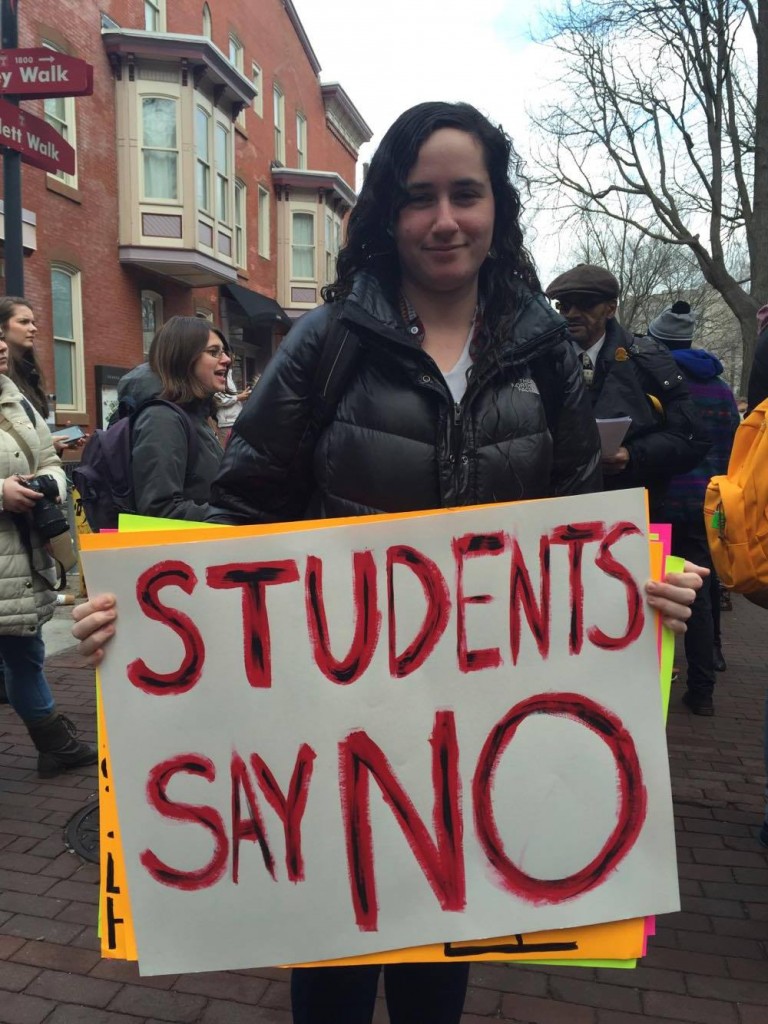 15:35
The crowd is pretty quiet right now with just mumbles among the crowd.

“This is a community.” 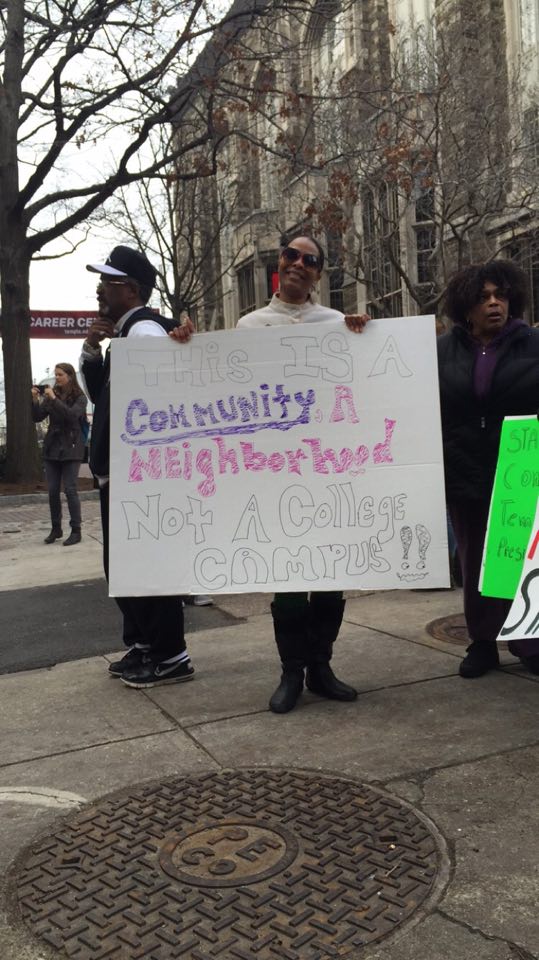 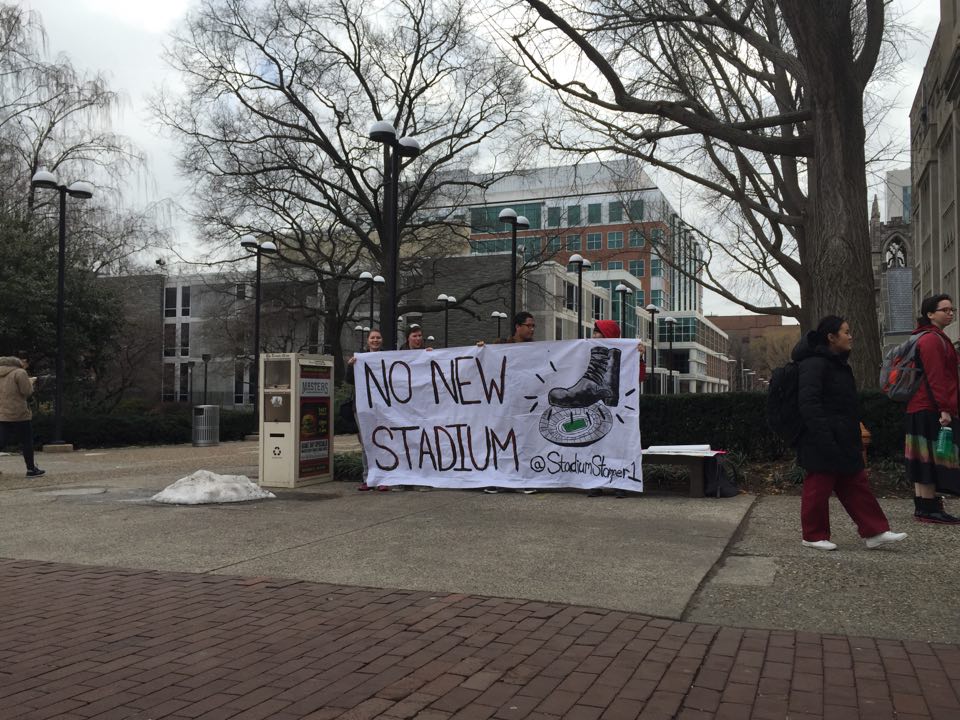 Protesters Jacqueline Wiggins and Ruth Birchett have speakers set up on their car. 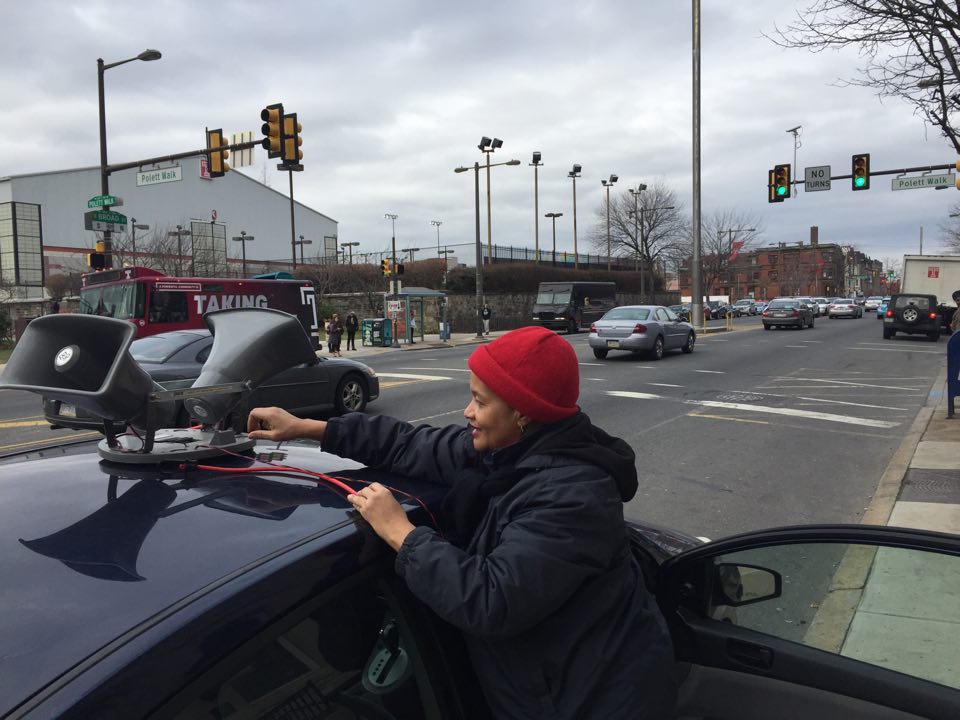 Protesters just starting to set up with signs. A large police force is already present. 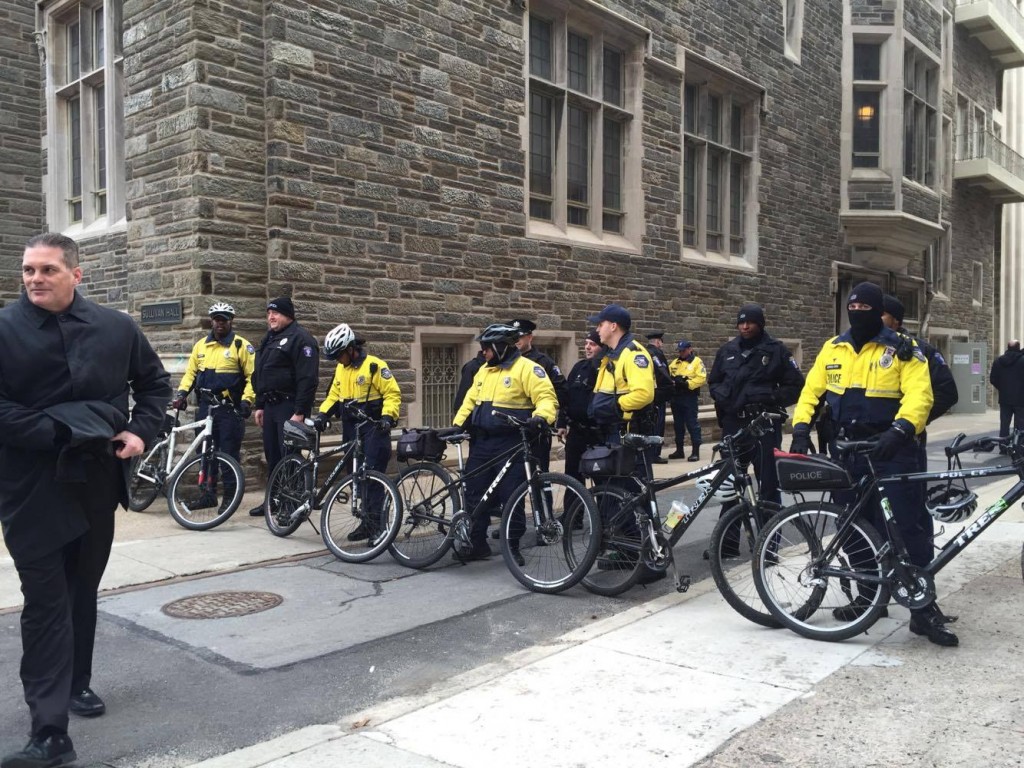 Protesters have started to gather outside Sullivan.

Jacqueline Wiggins and Ruth Birchett have lived in this neighborhood forever.

“If they run me away I’m gonna drive around and come back. This is a campaign. We’re fighting for our neighborhood,” said Ruth 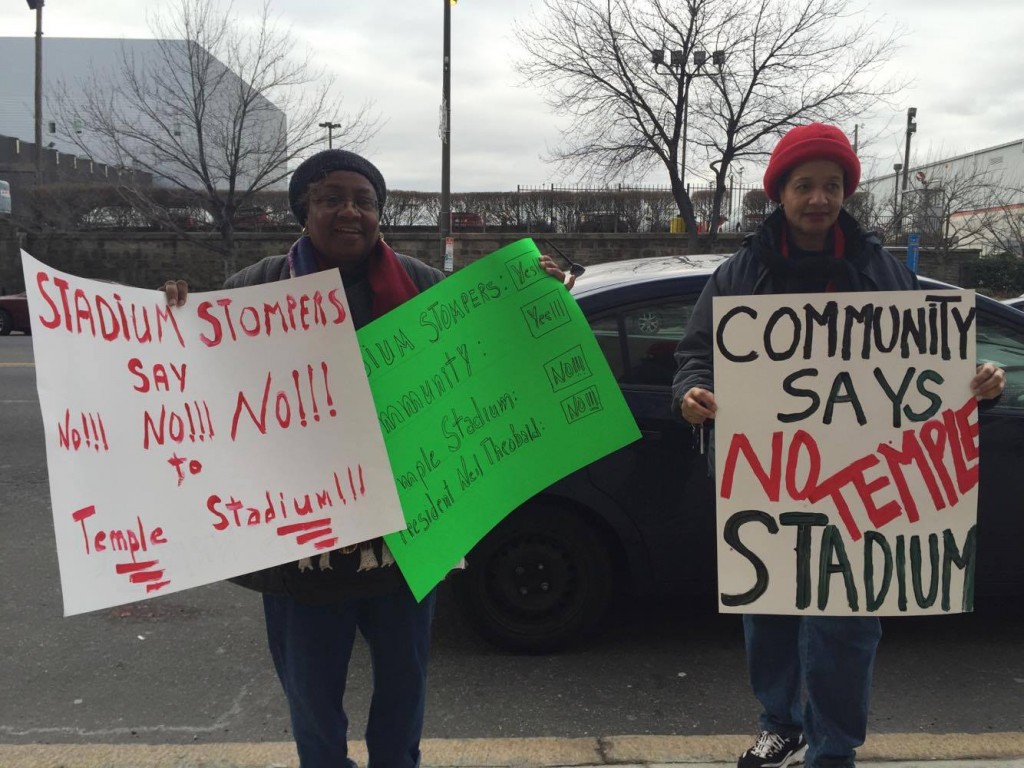