On Monday, February 1st at 4pm in Room 200C of the Howard Gittis Student Center, the Temple Student Government hosted a student-only discussion about the possibility of an on-campus football stadium located where Geasey Field is currently situated.

It was a panel-style forum – students tweeted questions to @TempleTSG and were answered by President Neil Theobald and/or Athletic Director Dr. Pat Kraft in front of the audience. 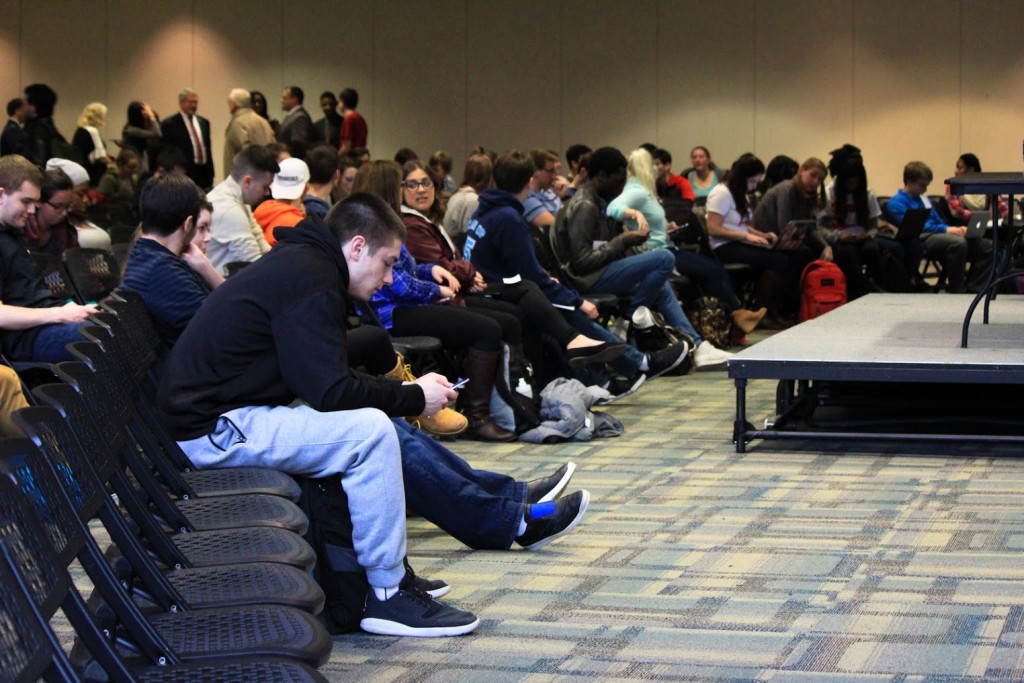 The majority of the 250-350 students to show up arrived promptly at 4pm. Journalists from many local news outlets made appearances. The room was buzzing with excitement from press, panelists and students alike.

The Temple Student Government hosted the event because they have received many questions from students raising concerns about the football stadium. On the agenda for the forum was finances, the community and logistics for events and game days.

President Theobald placed importance on the financial benefits of the stadium. He explained that building the stadium would not reflect on tuition rates, and that the money currently spent on renting out Lincoln Financial Field would be put towards its construction. He also emphasized the integral role that alumni play.

“Alumni are our most valuable resource,” Theobald said. “We bring people near the university and then we can have events for various schools, green space, etc. It simply allows us to bring back and get closer to our alumni.” 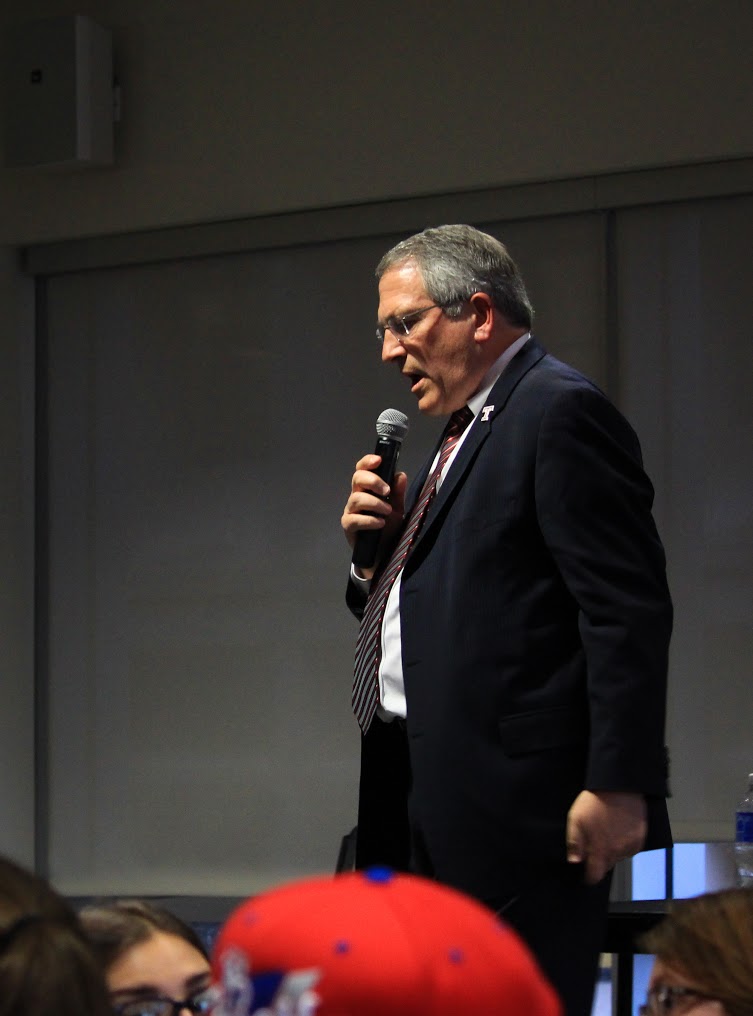 To bolster their argument, President Theobald quoted a conversation he had with Temple’s head football coach, Matt Rhule. When asked what Temple needs to raise the quality of the football program, Rhule said, “We need an on-campus stadium.”

President Theobald and Dr. Pat Kraft discussed other benefits to the on-campus stadium like job creation and an increased interest in Temple and its campus. They mentioned plans to turn 15th Street into an entirely pedestrian street, marked by shops, eateries and other local businesses. Students began to rustle in their seats, clearly opposed to the idea.

“It’s TSG’s responsibility to be a voice for Temple students,” says Ben Palestino, the press manager for Monday’s forum. “This will give students a chance to have their voices heard and questions answered.”

However, many students would say that the Temple Student Government did not reflect their voices during the discussion. Approximately twenty minutes into the discussion, two students silently walked to the front of the stage holding a sign that read: “Where is the community?”

They said nothing, and after a few moments were escorted out of the room by Allied Barton security guards. Their silent protest was just a preview of what was to come. 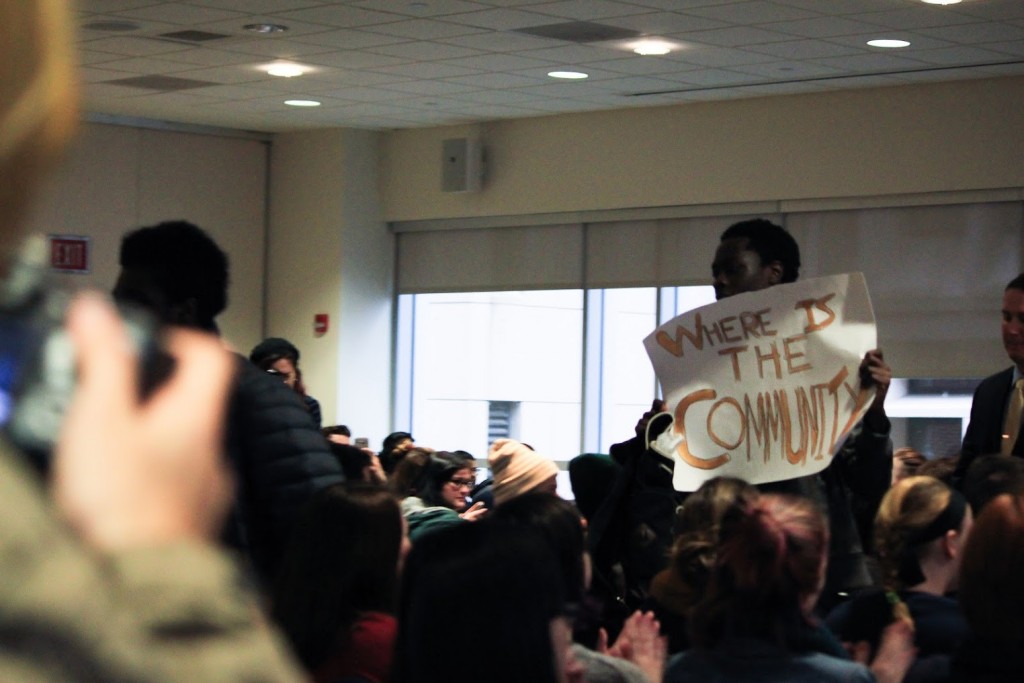 After the first protest, moderator and Student Body President Ryan Rinaldi asked about the playground on 16th and Berks streets. The president was quick to mention that neither the the playground nor the community center nearby will be touched by construction. His comments were cut short when chants of “Community says no to the stadium, students say no to the stadium!” and “Where is the community?” erupted throughout the room. Many students cheered while others looked around, mortified. Rinaldi made attempts to hush the crowd, security escorted out the protesters and silence fell over the room. However, the peace was fleeting.

About thirty minutes into the discussion, Dr. Kraft was asked if ticket prices and Wild Cherry Pass prices would be changed. In the middle of his response that prices are still up in the air, more students stood up to protest. Students were in uproar and all sense of order was lost.

“Stop the stadium, raise the wages!” the protesters yelled.

Efforts to discuss parking, or anything for that matter, became futile.

“I hear you guys” said Rinaldi.

“Do you really? Are you listening?” the protesters retorted.

At this point, reporters, panelists, and students began to lose hope that the discussion would progress. Exhaustion was made visible on the face of Ryan Rinaldi in the form of sweat. He and Dr. Kraft made attempts to redeem the conversation by answering a previously asked question about Temple’s eligibility for a Power five conference if the stadium is built. Additionally, President Theobald was asked about newly elected Philadelphia Mayor Jim Kenney’s stance on the stadium.

“He says we want to make sure the community is supportive of what we’re doing.” says Theobald.

“North Philly made, not Temple made!”

Amid the noise, a single woman stood up. She is both a Temple student studying social work and a local resident. She expressed that the community does not want the stadium because of the noise, lights, parties, and parking issues it would bring. She felt as though community voices are not being heard.

“A community is made of individuals. We are people,” she said, “You all think ‘it’s just North Philly,’ but we are North Philly.” 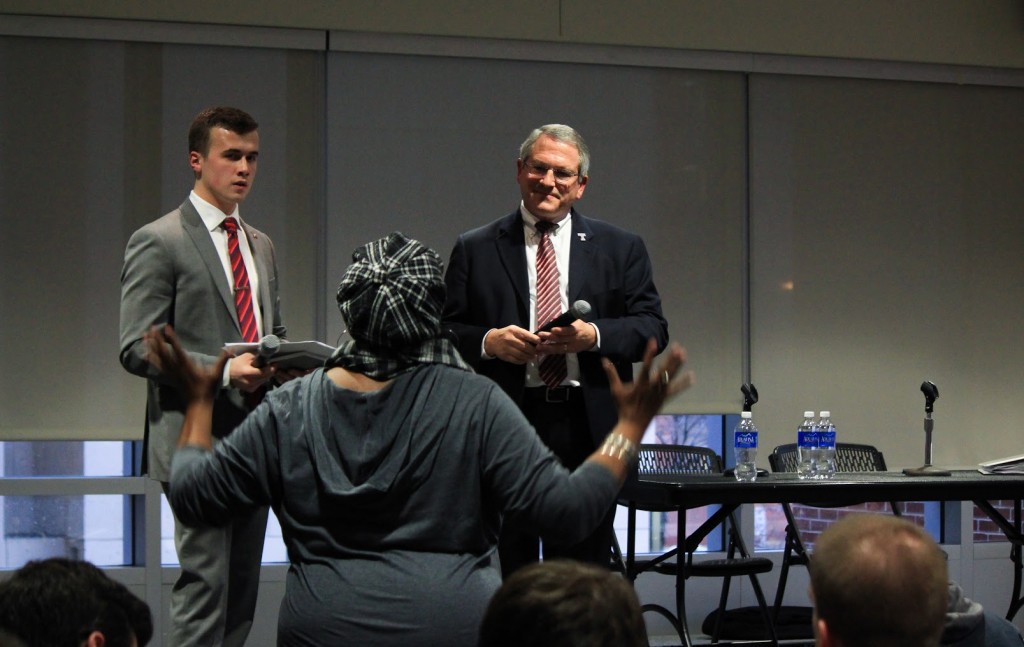 Her respectful protest earned cheers and applause. Unfortunately, there was no turning back after that point. Rinaldi closed the forum ten minutes early, looking defeated.

The stadium debate is a hot topic on campus. It begs the question, where do you stand?