She was reported missing Thursday afternoon after not returning home from Bodega, where she worked in the Short North

UPDATE [2/12/17, 12:07pm]: The suspect, Brian Golsby, accused of the murder of Reagan Tokes has also been charged with rape in addition to the previous charges of kidnapping, aggravated robbery, and aggravated murder.

UPDATE [2/11/17, 11:31am]: The suspect arrested in connection to the murder of Reagan Tokes, Brian Golsby, is a registered sex offender who was released from prison in November 2016 after serving a six year sentence for a 2010 offense in Grove City.

Thanks to our public safety partners 4 their assistance in arrest re Reagan D. Tokes murder. pic.twitter.com/ukezOscoMU

UPDATE [2/11/17, 11:13am]: A suspect named Brian Golsby has been arrested in connection to the murder of Reagan Tokes. The Grove City Police Department held a live press conference at 11am Saturday morning. Police say Golsby has no connection to Reagan. He is being charged with kidnapping, aggravated robbery, and aggravated murder. He has not confessed to those crimes, but was able to give the police details which closely match the evidence they have recovered.

UPDATE [2/10/17, 2:32pm]: Too’s Spirits Under High has announced that they will be holding a fundraiser for Reagan’s family this Tuesday, February 14th. 100 percent of the proceeds from this fundraiser will go towards the family to help them during this tragic time.

UPDATE [12:47pm]: The Ohio State University Police Division have officially released a Neighborhood Safety Notice. On their Facebook page, the OSU Police Division shared news from the Grove City Police Department to update the public on the crime that occurred at Scioto Metro Park.

A Neighborhood Safety Notice has been issued by OSU Public Safety. https://t.co/VYaJfK2bMf

In the report they have “confirmed the female victim to be Ohio State student Reagan Tokes.” The Police are actively investigating the crime and encourage anyone with information to contact the Grove City Police at 614-277-1710 or the Bureau of Criminal Investigation Tip Line at 855-224-6446. The report informs students that the “Police will maintain a visible presence in the campus area and ask that if you see something suspicious, call University Police or (off-campus) Columbus Police.”

The University has extended its counseling service to its students tonight from 5 p.m. to 10 p.m. in the Ohio Union’s Alonso Family Room located in the Student Life Multicultural Center. The report reminds that becoming a victim of a crime is no one’s fault, and advises students to travel safely by utilizing transportation services and by looking out for one another.

UPDATE [2/10/17, 12:09pm]: Investigators have reported that missing OSU student Reagan Tokes likely died of a single gunshot wound. The police have not released any information about a suspect or a possible motive for the crime.

UPDATE [11:26am]: This morning, the Franklin County coroner officially connected the body discovered at the Scioto Grove Metro Park, found 150 ft from the road, to the missing Ohio State student, Reagan Tokes.

UPDATE [2/10/17, 10:20am]: Reagan’s co-workers at Bodega, the restaurant she was last seen leaving, told Columbus police that a bartender usually walks her to her car after a shift, but that she left alone on Wednesday night.

Reagan’s sister, Makenzie, told The Tab, “The cameras show her get close to her car but they don’t know if she was able to get in it.”

UPDATE [2/10/17, 9:23am]: Students at The Ohio State University have not yet received any alert about Reagan Tokes’s death.

UPDATE [2/10/17, 7:49am]: Police are expected to officially identify the dead body of a woman found at Scioto Grove Metro Park this morning.

The body was found near the main entrance of the park and police said the woman was shot but could not confirm she was killed on the scene.

UPDATE [2/10/17, 12:39am]: Reagan Tokes’s death has been confirmed by her uncle in a Facebook post. He said Reagan’s body was found Thursday afternoon, but didn’t directly connect it to the body found at Scioto Grove Metro Park. Police have still not released any new information further linking the two.

In the Facebook post, Reagan’s uncle writes: “Thank you all for your prayers and support for my beautiful niece/god daughter Reagan Tokes that went missing at OSU last night. This afternoon, her body was found. Words can’t express the pain we are feeling as a family.”

You hear about these things on the news but you never think it could happen. I love you with all my heart gee gee pic.twitter.com/GG9Rq9FLk5

UPDATE [2/9/17, 10:47pm]: The Tab Ohio State has asked Reagan’s sister Makenzie if the license number linked to the woman found dead in Scioto Grove Metro Park (Ohio FGR 8547) matches Reagan’s car. We will update this story with further details as the night progresses. Makenzie has just posted the following tweet:

“@realDonaldTrump security is a major issue if my sister was killed leaving her job last night. Please do all you can to keep us safe”

@realDonaldTrump security is a major issue if my sister was killed leaving her job last night. Please do all you can to keep us safe

UPDATE [2/9/17, 9:41pm]: Police are not currently connecting Reagan’s disappearance with the discovery of the dead body of a woman near the main entrance to Scioto Grove Metro Park earlier this afternoon. But the woman’s missing vehicle is described as a silver 1999 Acura with Miami Dolphins and Block Ohio State stickers in the window.

[2/9/17, 5:38pm] An Ohio State student, Reagan Tokes, was reported missing earlier today by her sister, Makenzie Tokes. Reagan is a member of the class of 2017 studying Psychology in Ohio State’s college of Arts and Sciences. 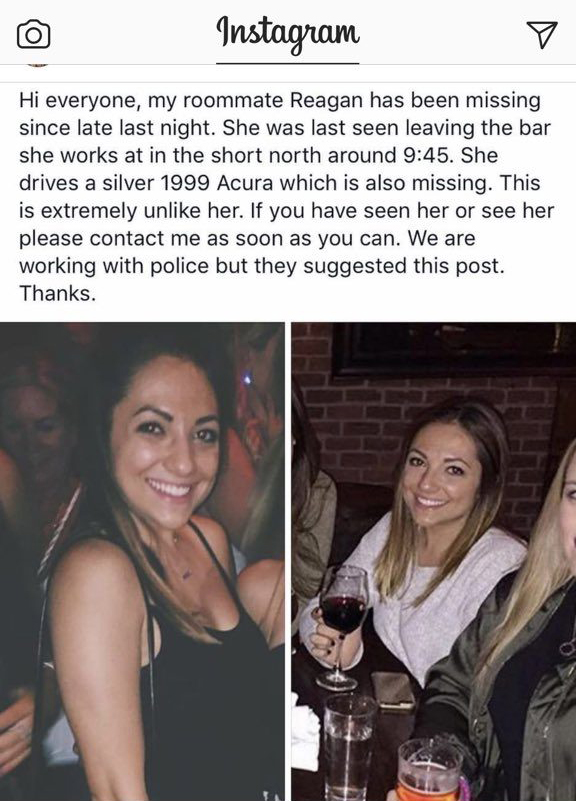 Reagan was last seen leaving the bar she works at in the Short North around 10pm last night. The car she drives, a 1999 Acura, is also missing. The car has both a Miami Dolphins sticker and an Ohio State sticker on it. Family and friends of Reagan are currently working with the police to try and find more information.

“The cameras show her get close to her car but they don’t know if she was able to get in it,” Makenzie Tokes told The Tab.

According to her sister, the last message that was delivered to her phone was at 10:30 p.m. with no reply.

EVERYONE please help my sister Reagan Tokes is missing from OSU. PLEASE CONTACT ME IF YOU KNOW ANYTHING @reagantokes PLEASE PRAY pic.twitter.com/txstbnFy0D

Daniel Smyth, Zoe Weaver and Colleen Wuertz have contributed to this story.