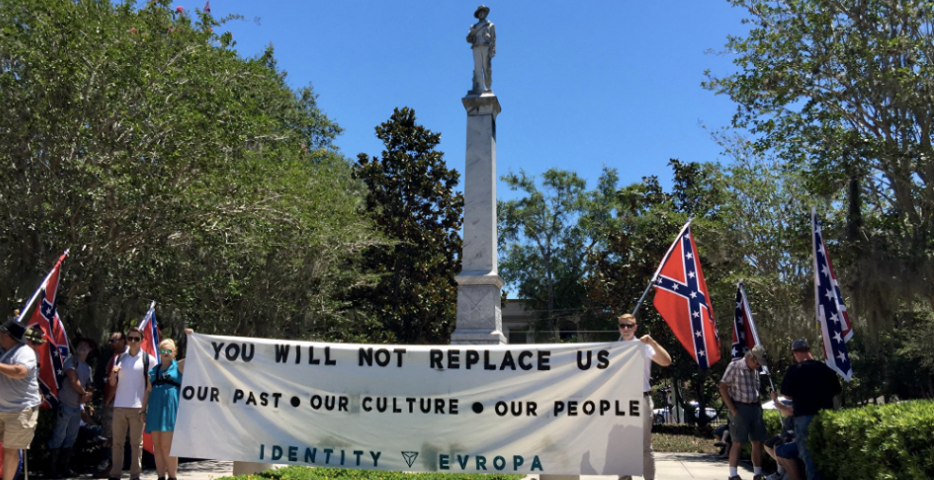 No time for losers

4 years ago
Guides
US

Following Saturday’s tragedy, entire cities and multiple legislators have rightly pushed for the removal of other similar monuments that could possibly incite the snowflake neo-Nazi demographic into a collective tantrum to defend these glorified participation trophies for losers.

Those demonstrators in Durham committed an act of public service, and on behalf of everyone else who is horrified by the actions of James Fields, I’d like to both thank them personally, and present to you a list of similar monuments that should probably be yanked down while we’re at it. 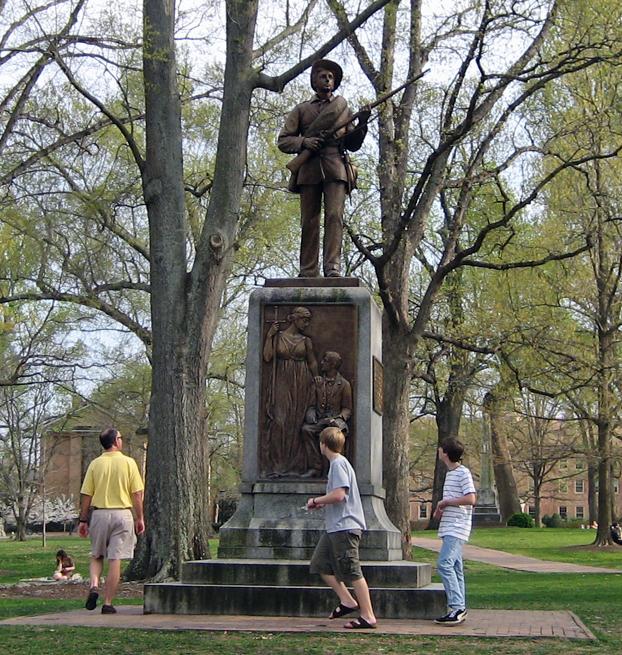 This statue, built in 1913, was funded by UNC alumni and stands on Chapel Hill. The monument has served as the meeting site for many demonstrations in history, mostly by UNC students. In 1968, following the assassination of Martin Luther King Jr., the monument was vandalized. Throughout the 1970s, it was the site of many demonstrations of the Black Student Movement. Students gathered again in 1992 after police were found not guilty in the Rodney King trial. There have been many protests since, with the most recent happening in 2015. Many citizens of North Carolina and students have called for the removal of Silent Sam, but he still stands. Maybe one final protest will do it. 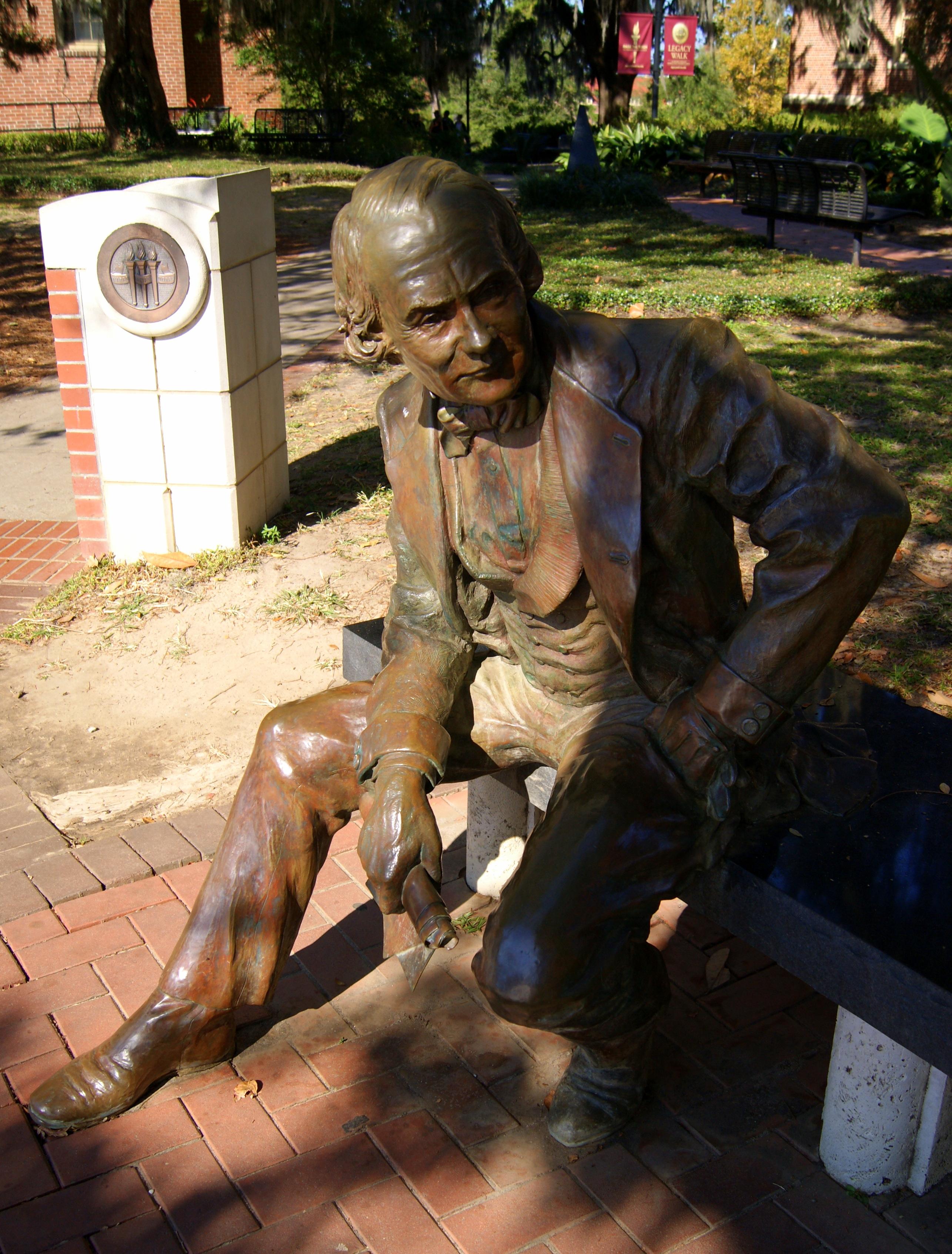 Unveiled recently in 2002, this statue sits in front of the Wescott building and signals the beginning of the Legacy Walk, a path that one can take to admire the 150 years of “successes” Florida State has had. To whoever thought that showing the world the school accepted money made off the backs of slaves was a good idea, seriously wyd?

There is a plaque that lists him as the founder of FSU, because he petitioned the state legislation for institutes of higher education, and promised annual endowments to the college. In 2016 the Students for a Democratic Society organization petitioned the SGA to remove the statue and to change the name of the Eppes Hall building . Eppes was a slave owner, supported the Confederacy, and participated in night watches to catch slaves who were running away in Tallahassee. Despite this knowledge, the student body voted to let the statue remain. 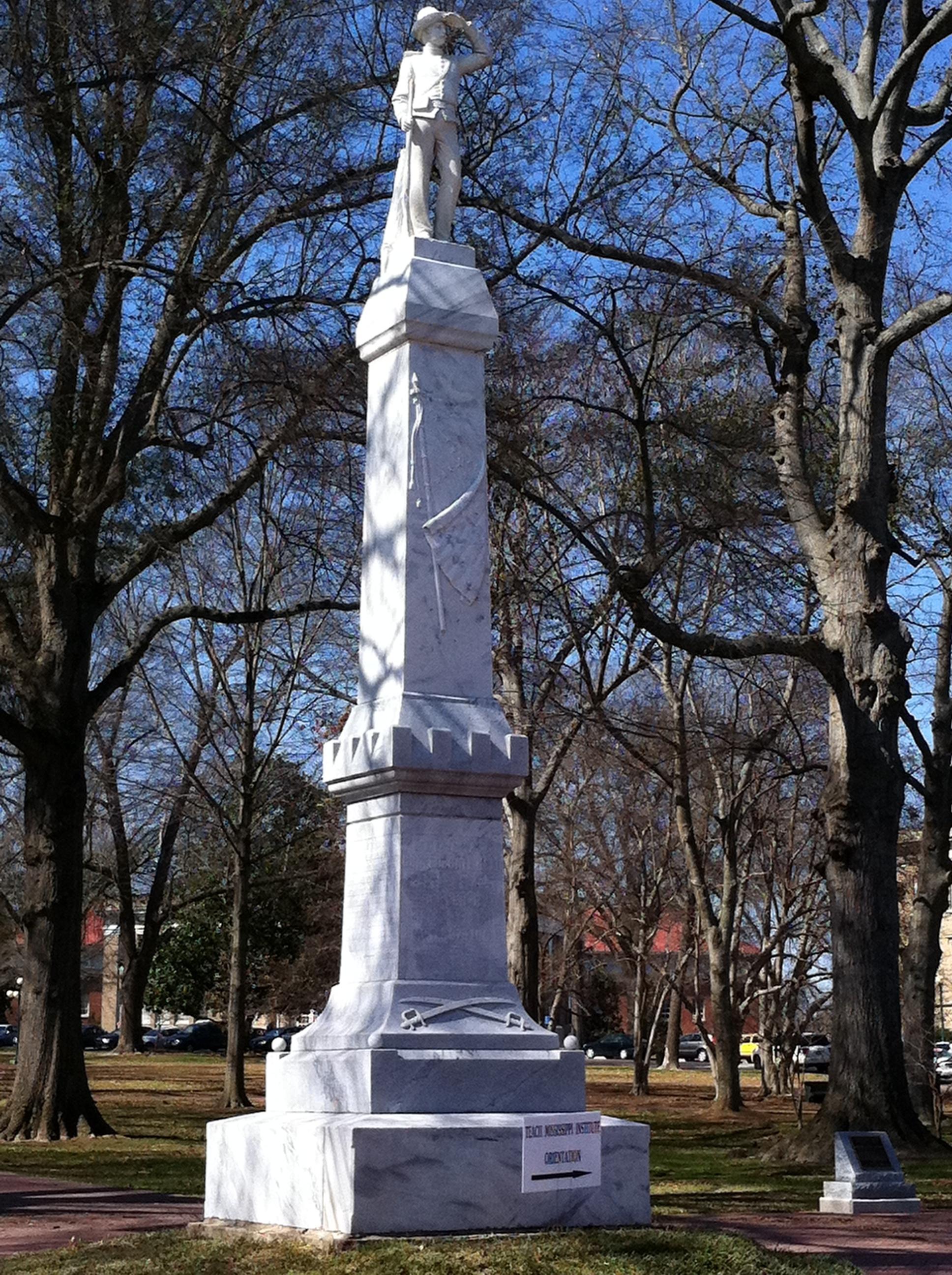 Students have to stare at this every day

This photo shows a statue of a Confederate soldier in the heart of Ole Miss’s campus. The monument stands on Lyceum Circle, directly outside the main administrative building. The feature was erected in 1906, and served as the meeting point for extremists who protested the admission of the University’s first African American student, James Meredith, in 1962. Shocker. 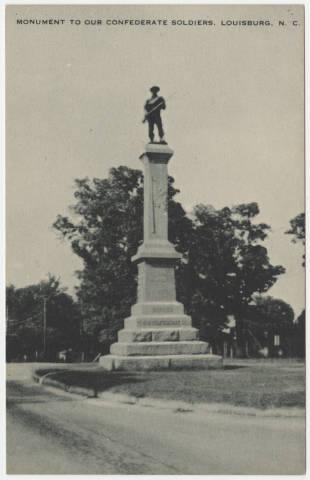 @Louisburg, tear it down already

This shrine stands on Main Street, in the center of the campus of Louisburg College, where it honors confederate soldiers for their “courageous acts”. The monument was dedicated in 1914 to the city of Louisburg, and has remained untouched.

This establishment is too fine to honor such a horrible man

Another prominent name in the center of the UVA tragedy, Confederate General Robert E. Lee turned down a variety of opportunities following the end of the war, and instead took up residence in the President’s House at Washington and Lee University. At the time, the college’s name was just Washington University, but after Lee’s passing in 1870 they adopted his name as well. Lee’s family continued to be involved in the running of the university, and much of the Lee family is buried in the Lee Chapel on campus. The current motto of the University is an adaption of the Lee family motto as well. 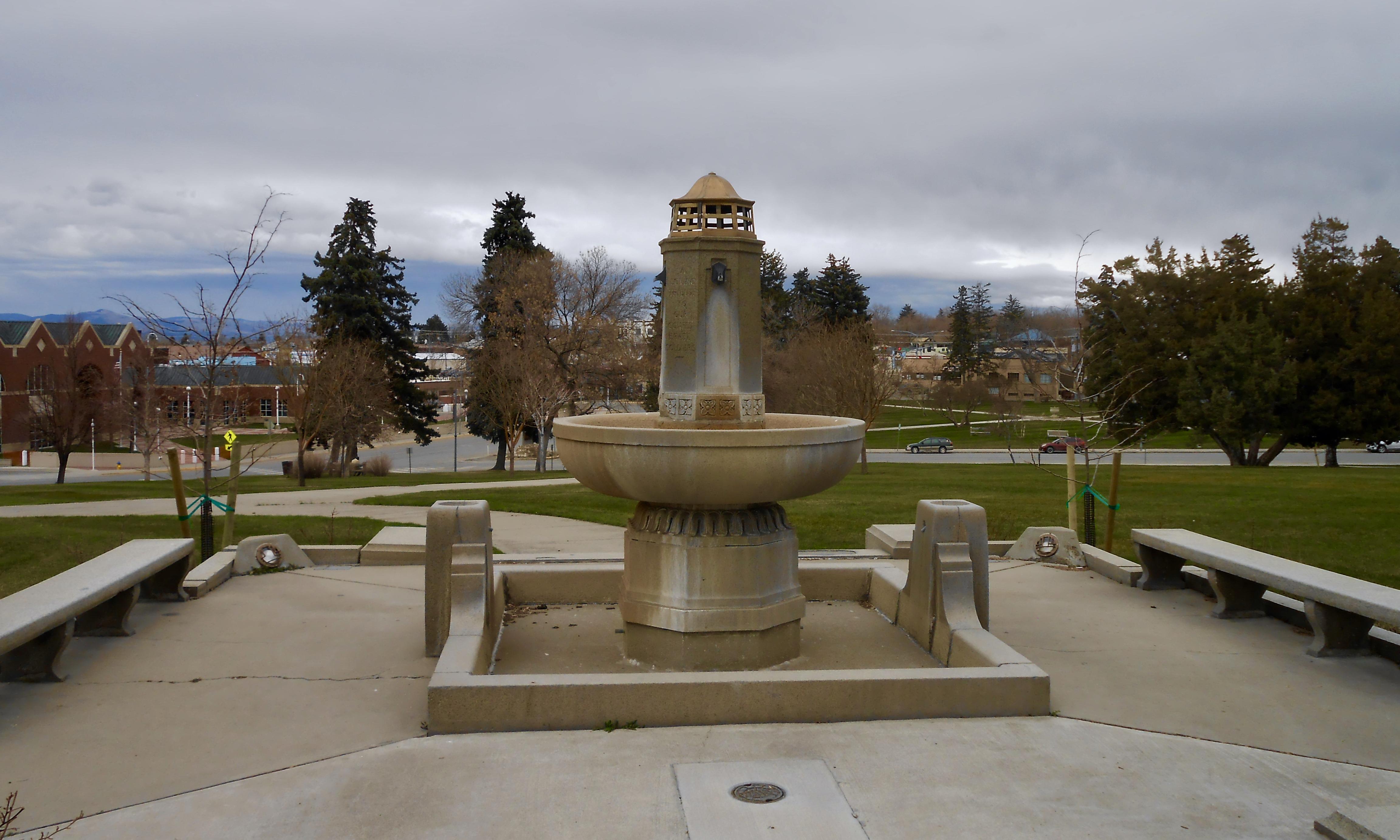 Pretty fountain for some ugly history

This fountain, honoring Confederate Soldiers (demons), was commissioned in 1916. Renaming the monument to “Civil War Memorial Fountain” has been proposed many times, but city officials are firm in keeping the historic original name because apparently nothing makes old white men happier in Montana than to propagate the idea that Confederate soldiers should be commemorated for their actions. 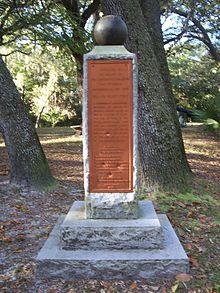 Really? A State Park too?

This is a State Park that is also listed on the United States registry of Historic places, and served as a place to fortify the city from Union attack, as well as control the port used for trading. A monument sits inside of the Park, which proudly boasts itself as a confederate stronghold on many websites. If it wasn’t bad enough just to have to deal with monuments, there are entire State Parks funded by tax money dedicated to racists. Wild. 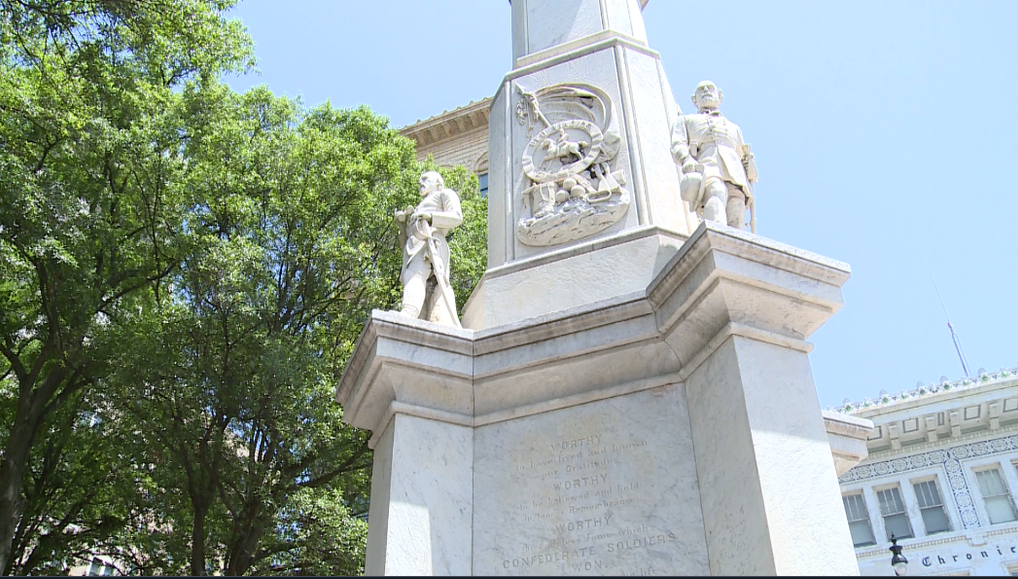 – General Robert E. Lee — the epitome of racism and subsequently the reason for this article.

– Thomas R. R. Cobb — A man who once wrote a treatise for slavery and ACTUALLY said:

“This inquiry into the physical, mental, and moral development of the negro race seems to point them clearly, as peculiarly fitted for a laborious class. The physical frame is capable of great and long-continued exertion. Their mental capacity renders them incapable of successful self-development, and yet adapts them for the direction of the wiser race.”

– Stonewall Jackson — Who was killed by “friendly fire” and to whoever did it, thanks.

The inscription on the monument commends Confederate soldiers who fought for “the liberties of the south”, otherwise known as human fucking beings that they wanted to treat as property. 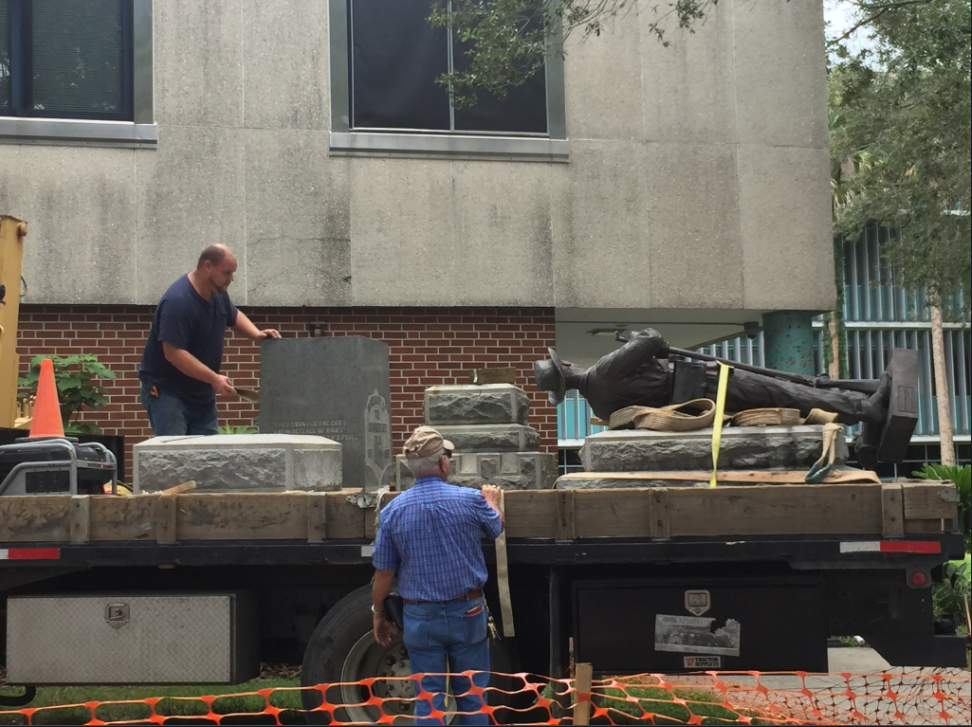 If only they were transporting him to an incinerator

As of Monday, the Old Joe statue has been removed from in front of the Alachua County courthouse in downtown Gainesville. Similar to the Johnny Reb statue though, it now sits in a cemetery in lieu of being destroyed or sent to a museum where it could be displayed alongside the chains and torture devices these men fought to use on their slaves legally. 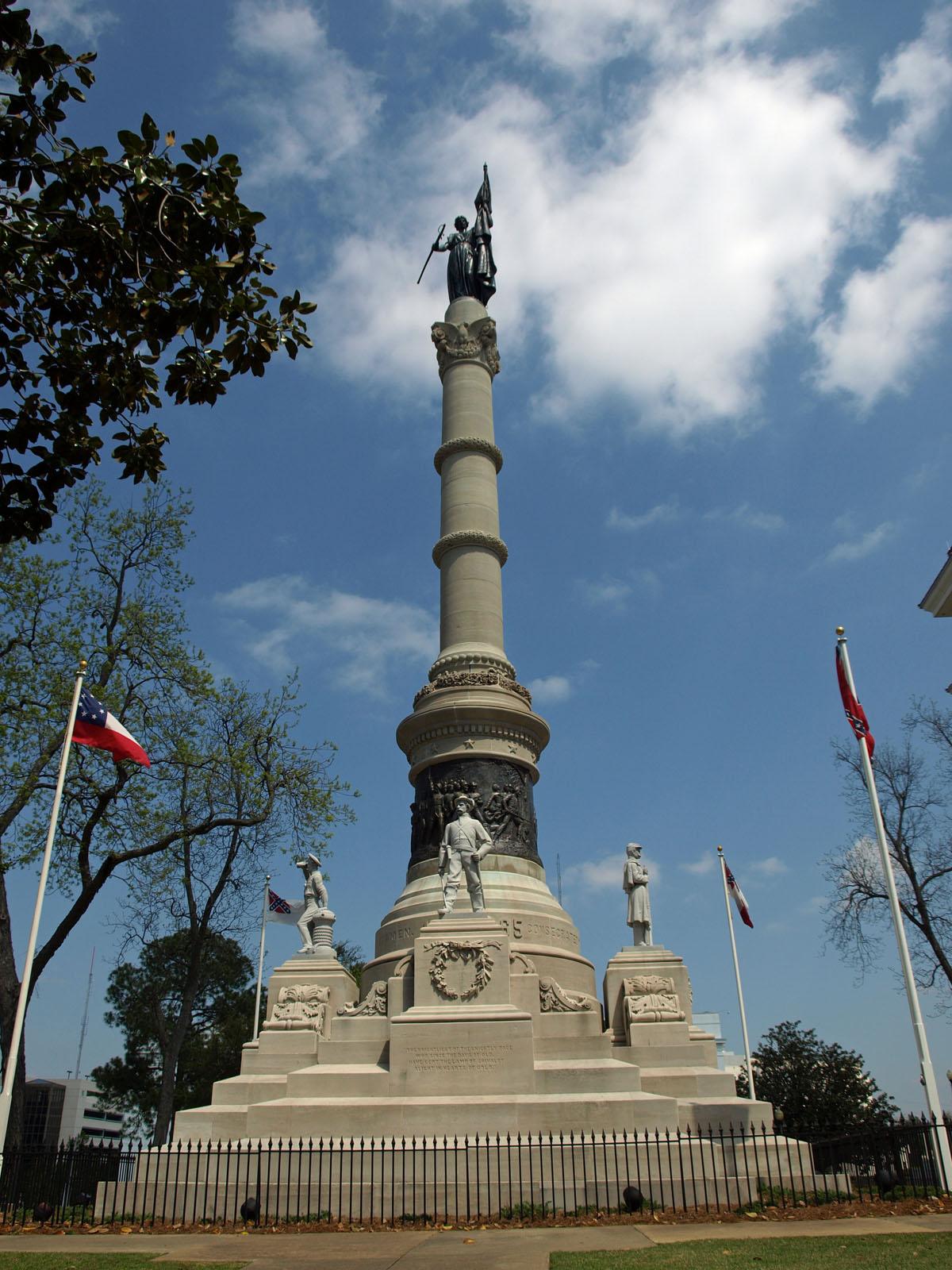 This monument is HUGE, and also a huge waste of space

This monument was actually started by Jefferson Davis, the President of the Confederacy. The monument stands 88 feet tall, cost $41,755 and was dedicated to the 122,000 Confederate Veterans of the Civil War on December 7, 1898. This amount of money spent on the monument would be equivalent to 1.2 million dollars today, and stands at the Alabama State Capitol in Montgomery. The symbol used to be surrounded by the three Confederate flags, until they were removed without word following the Charleston church massacre. Imagine the feeling of knowing you are pulling down a $1.2 million tribute to slave owners. Get on it, guys. 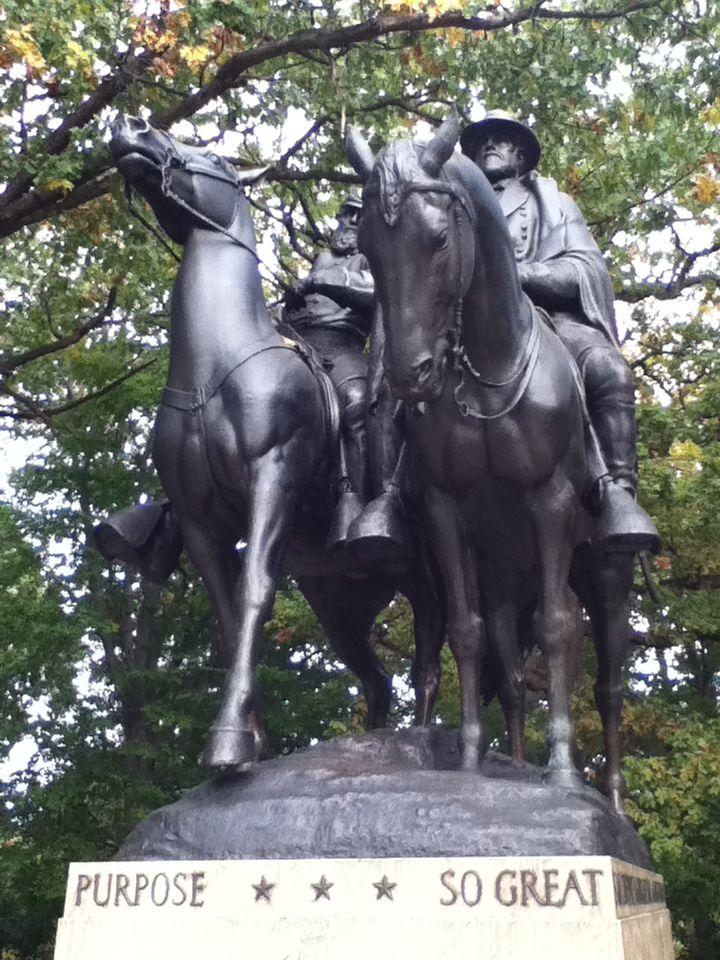 SO GREAT at committing horrendous acts

A monument featuring Stonewall Jackson and Robert E. Lee stands in Wyman Park in Baltimore, near Johns Hopkins University. The monument was dedicated to the city of Baltimore in 1948, by the will of the late Henry Ferguson, the banker who organized the Colonial Trust Company. In Ferguson’s will, he left specific instructions for a monument to be built of his the men who he defined as his childhood heroes, Stonewall and Lee. In light of the recent Charlottesville riot, the Mayor of Baltimore, Catherine Pugh, has released a statement to proceed with the removal of the remaining Confederate monuments in Baltimore. 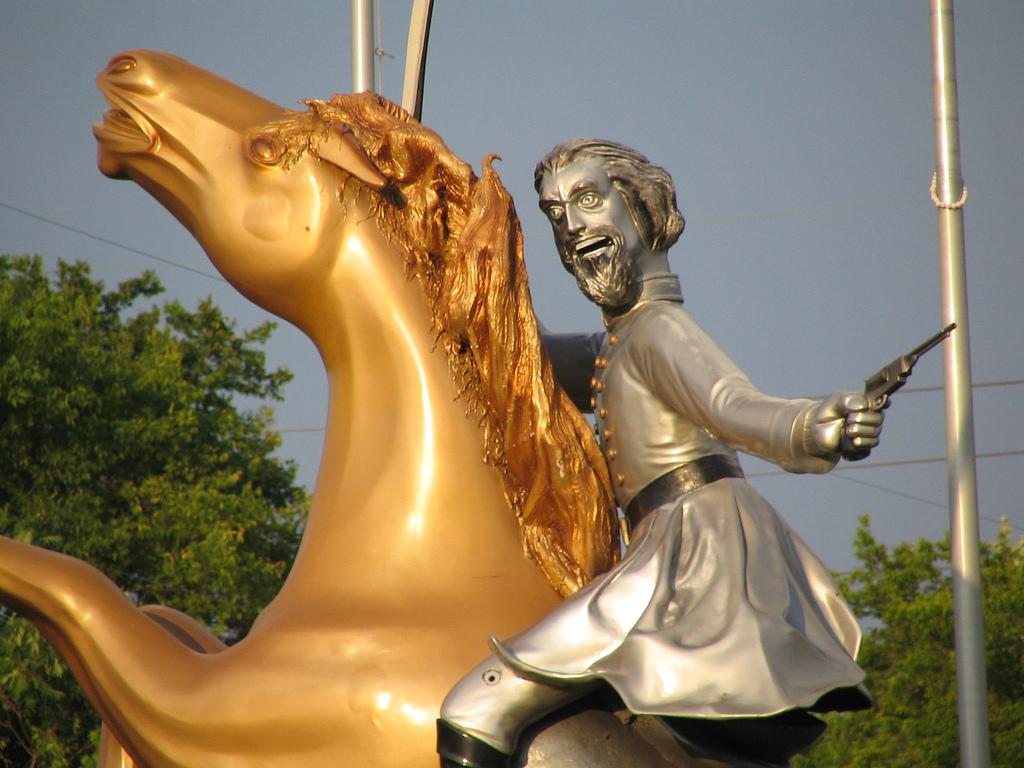 Is this statue a joke?

Tensions rose Monday night following the Virginia tragedy as protesters in Nashville demanded the removal of two statues depicting a man who, following his rise to General in the Confederate army, chose to become a Grand Wizard of the KKK and contribute to the massacre of over 300 black Union soldiers who had already surrendered to him. Democrats in Tennessee tried to remove the statue in 2015, but the state has a “heritage protection act” that barred its removal. Sounds like a reason for racists to keep statues of their racist idols but OK. 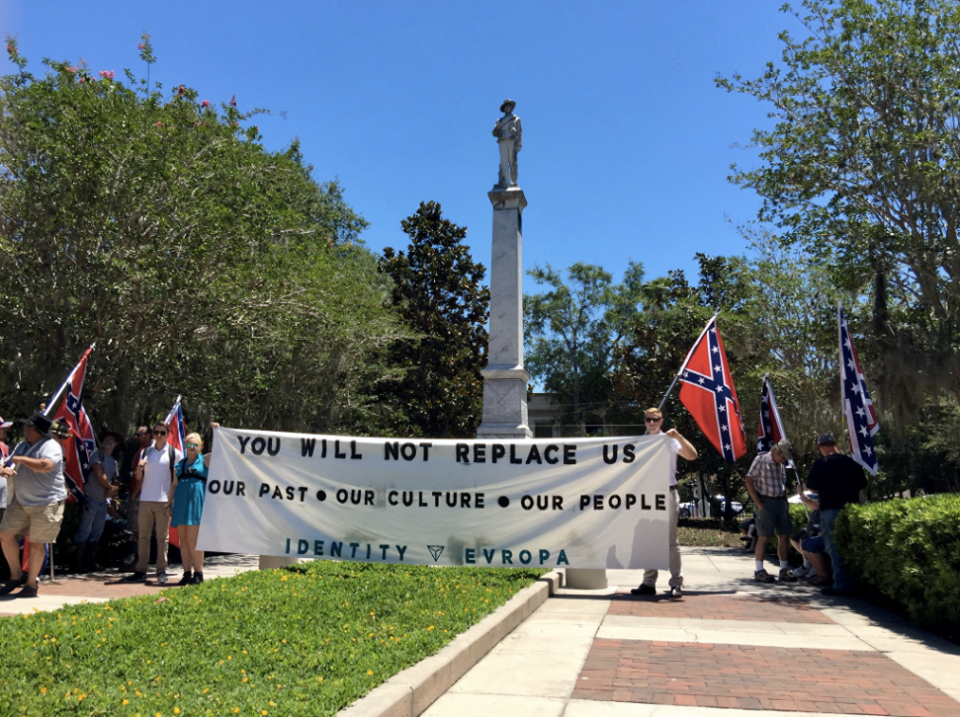 Look at these awful humans

The statue was removed from Lake Eola Park in downtown Orlando last month after multiple protests, but was lamely moved to Greenwood Cemetery where it currently faces the Orlando Executive Airport as an effort to “not offend” people. Why didn’t they just smash it and turn it into gravel? Even that would be too good for it. Six other monuments remain in Central Florida, here’s an interactive map to show you how to get there.