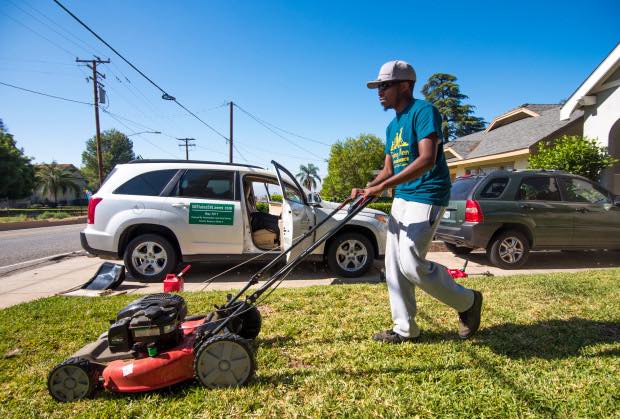 He’s made it to 19 states in under a month

Rodney Smith Jr., a student at Alabama A&M, is aiming to mow 50 lawns in 50 states, and after less than a month he’s almost half-way there.

Rodney, who is originally from Bermuda, has recently started not one, but two free-lawn mowing ventures: his own 50 States, 50 Lawns tour and the 50 Yard Challenge, which encourages young kids to mow 50 lawns free-of-charge to members of their community.

Rodney’s has been driving all across the country providing free lawn mowing services to the elderly, disabled, veterans and single moms of America, catching the attention of companies, news outlets and social media followers everywhere. He even got the world’s largest maker of lawn mower engines to accept his challenge, and together they plan to mow 50 lawns in one day during Rodney’s upcoming time in Milwaukee. The company also donated equipment to him for his use on the road.

The Tab caught up with Rodney as he drove to Nebraska to tackle his next lawn.

Hi Rodney! Tell me, why did you choose lawn mowing as your good deed to do for the world?

I don’t really know. When I was younger I didn’t really like mowing lawns, but when I got here I helped an elderly man mow his lawn and I saw it was something I could do for the elderly, disabled, single moms and veterans. I mowed 40 lawns in the first month and over 50 by the first month and a half, so I decided to mow lawns in every state.

So, right now you’re doing your 50 states 50 lawns tour. How many states have you hit so far? 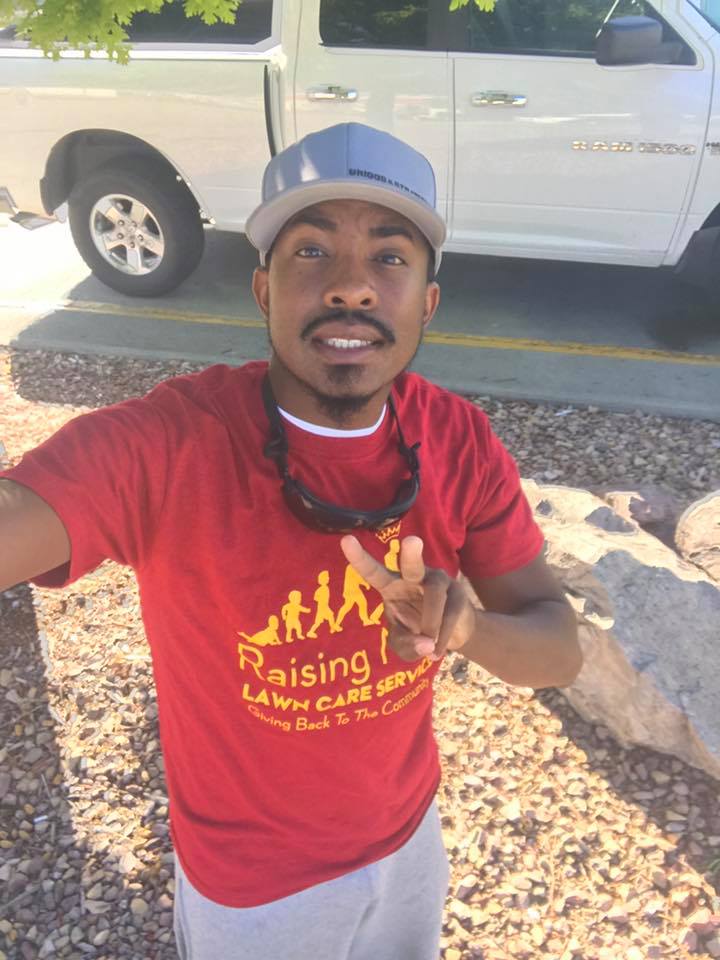 Smith heading out to Nebraska

Are you pretty much going to a different state every day then?

It depends. On the west coast there’s a lot of driving, but on the east coast, where I’m from, I can hit two states in a day.

How do you decide who you’re going to mow the lawn for? Do you decide once you get to the state, or…?

I reached out to my Facebook followers to have them send me anyone they know in all 50 states that are elderly, disabled, single moms and veterans who need lawns mowed and then I go from there.

Are you doing any sightseeing on your way or is this a strictly lawn-mowing mission?

I’m trying to do some sightseeing. As I drive I’ll stop and see stuff. I’m hoping to see more museums and things as I go to all of the states.

Which state have you been to that’s your favorite so far?

Well, that’s a tough one, because I haven’t been to my favorite state yet.

Which is your favorite state?

Have you had any really cool or special interactions with people you have mowed lawns for?

Yeah, actually, with this elderly woman in Texas. Her daughter had referred her—she’s a teacher. When she came home from work and saw me mowing her lawn she broke down in tears. You know, her lawn hadn’t been cut in probably a year and she was having a hard time getting it cut, so seeing me come all the way from Alabama just to mow her lawn really moved her. 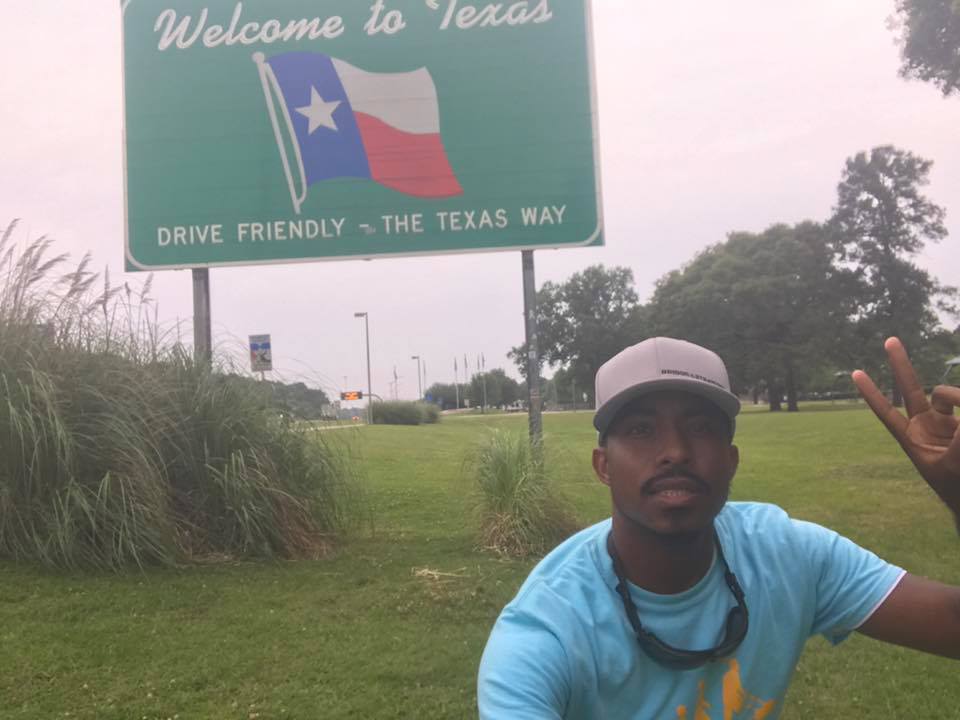 I know you’re also meeting up with kids who are doing your 50 Yard Challenge along the way. How has that been for you?

It’s great to see kids getting outside and doing things for their community. And, you know, no one is making them do it—they’re choosing to do it themselves. They’re excited. And they get the shirts, so they start out with the white shirt and after 10 lawns they get the orange, 20 is green…

And how many kids are doing the challenge that you know of right now?

About 50, at least. And it’s not just in America. We have two kids in England doing the challenge. 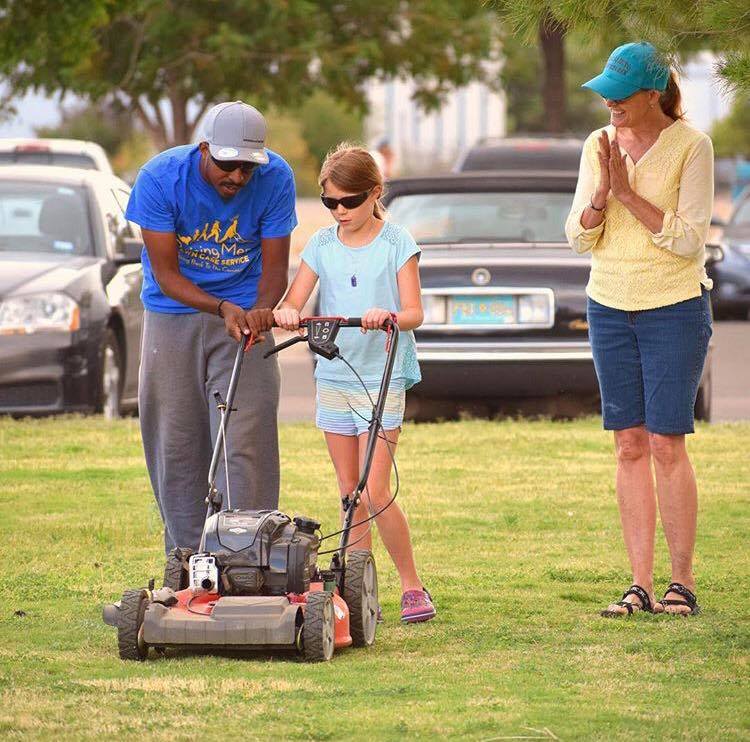 Smith showing a young girl in New Mexico the ropes

You’re also documenting the whole experience on Facebook Live. How have people been reacting to that?

Yes, I am. It’s been really good. I think people just like to see someone doing this kind of thing for others and traveling all over America. But, it’s not just Facebook Live. I have my GoPro with me and I’m thinking when I’ve done all 50 states I’ll put it all together and post it.

Do you have a vision for where you see this whole thing going in the future?

We have chapters in a few states right now, but I want to have chapters in every state. And after all 50 states, I want to do seven lawns on seven continents next year. We have supporters in Australia and the U.K. so it’s already spreading worldwide. I want it to be a global thing.