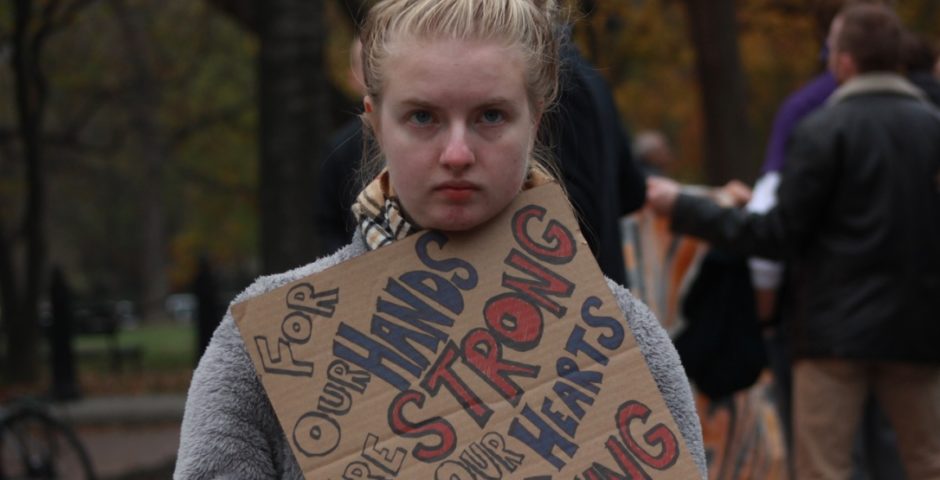 When it comes to protesting, college students need to stop settling for complacency

You say you want a revolution

There’s a reason so many movies depict potential Miss Universe/USA/World nominees wishing for world peace as a stereotype.

On one hand, I have been an unabashed idealist – the type of person who earnestly joined the Young Democrats in high school, loved Obama and enthusiastically wrote on college admission essays about how “Imagine” was my favorite song. 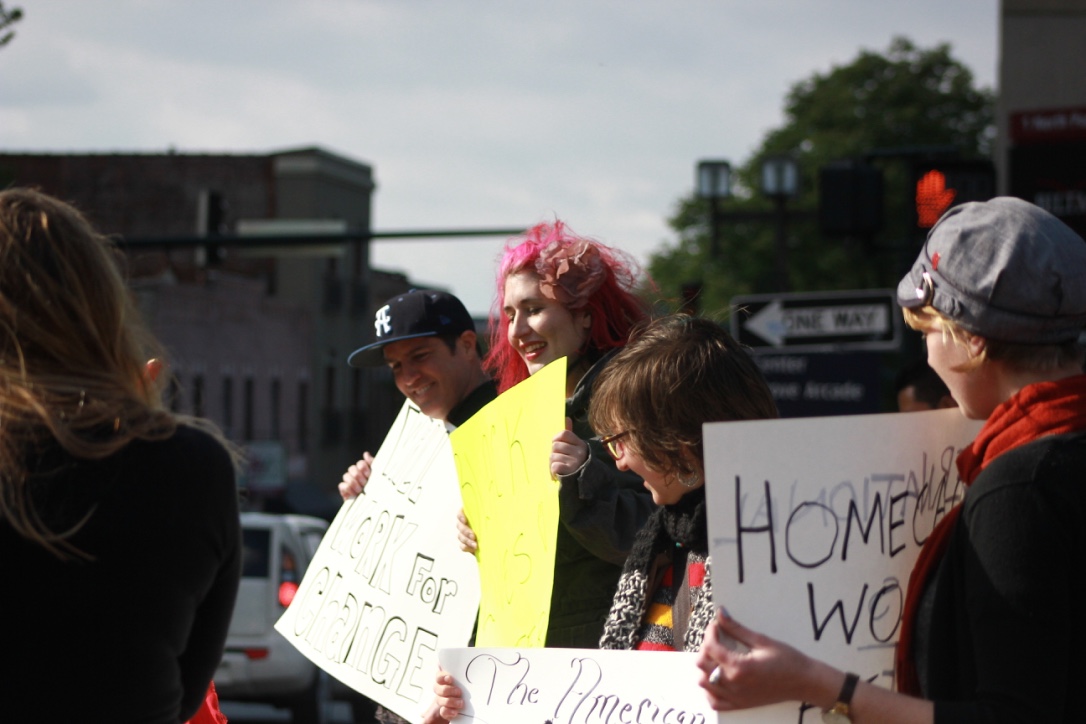 As I’ve gotten older, however, something has changed. Maybe it’s a sign of me internalizing the stereotypical apathy so many people have said characterize the general malaise of being in one’s twenties, but blind idealism seems a bit ridiculous now. You realize that artists who you admired for their sharp, social justice-minded critiques of the world at large (Bob Dylan, Paul Simon, Lou Reed) are or were people who treated those closest to them like shit. How can one “save the world” and care for humanity at large if they can’t even be civil to the person standing in front of them? Is “world peace” all for nought? Is anarchy the ultimate (and kindest) answer?

This brings me to the issue of protesting, something I have been thinking way too often about (but perhaps for good reason).

I was never the type of person who would join in blindly with any protest. At least, I liked to know about the issue and why I was standing on a street corner with a sign, making weird eye contact with people driving by and feeling a slight sense of victory if they honked their horn in support. There is a camaraderie in protesting, a sense of, “Yeah! I’m doing something! This is the best way to spend my time for today! Fuck studying!” 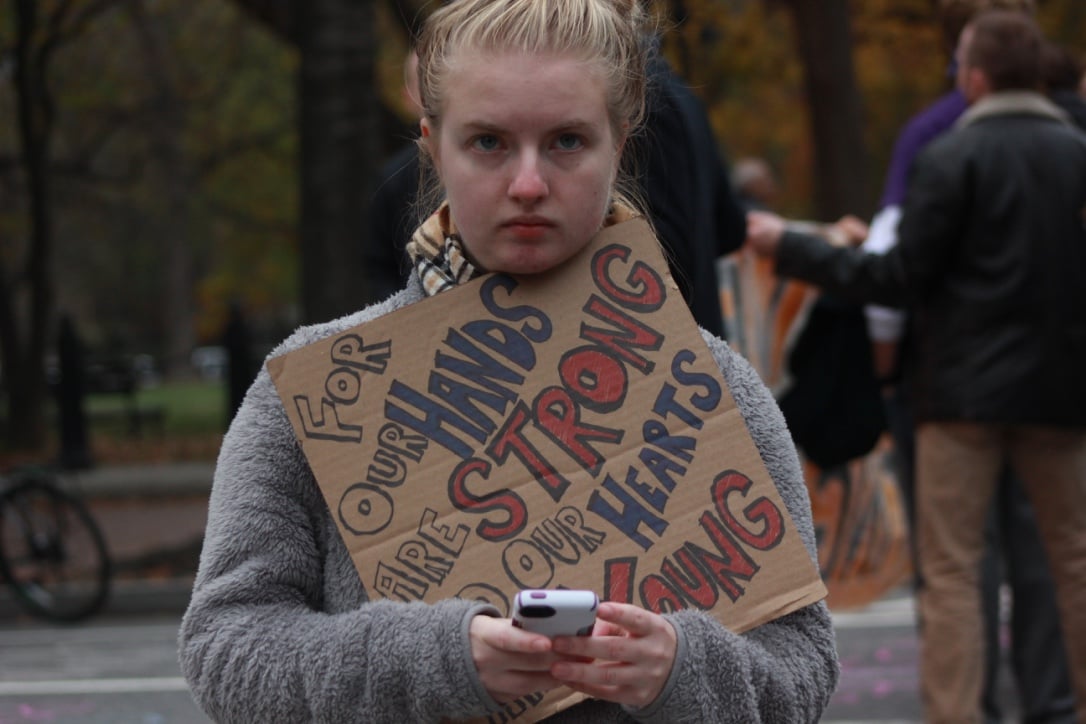 An especially interesting phenomenon to dissect is the nature of the protest on college campuses. At the university I currently attend, there have been a bevy of protests, the majority of which I have participated in. Some of them are geared toward national movements, like Black Lives Matter, and more recently, have focused on the passing of HB2 in North Carolina.

As a member of the transgender community, I absolutely felt the need to participate in the HB2 protest. And yet, as I found myself leaving class and approaching the steps of the library where the students had gathered, a growing sense of skepticism overtook me. On the steps, students were chanting vigorously: “Hey hey! Ho ho! HB2 has got to go!” in between individual testimonials of disgust with the bill. On the other side, the local news station, the UNCA “news office” *cough PR machine cough* and various members of the administration, clutched thermoses of coffee while watching the students with complacent happiness. Behind them a banner reading how the Princeton Review ranked UNCA #1 for “making an impact” hung over the doors to the library. 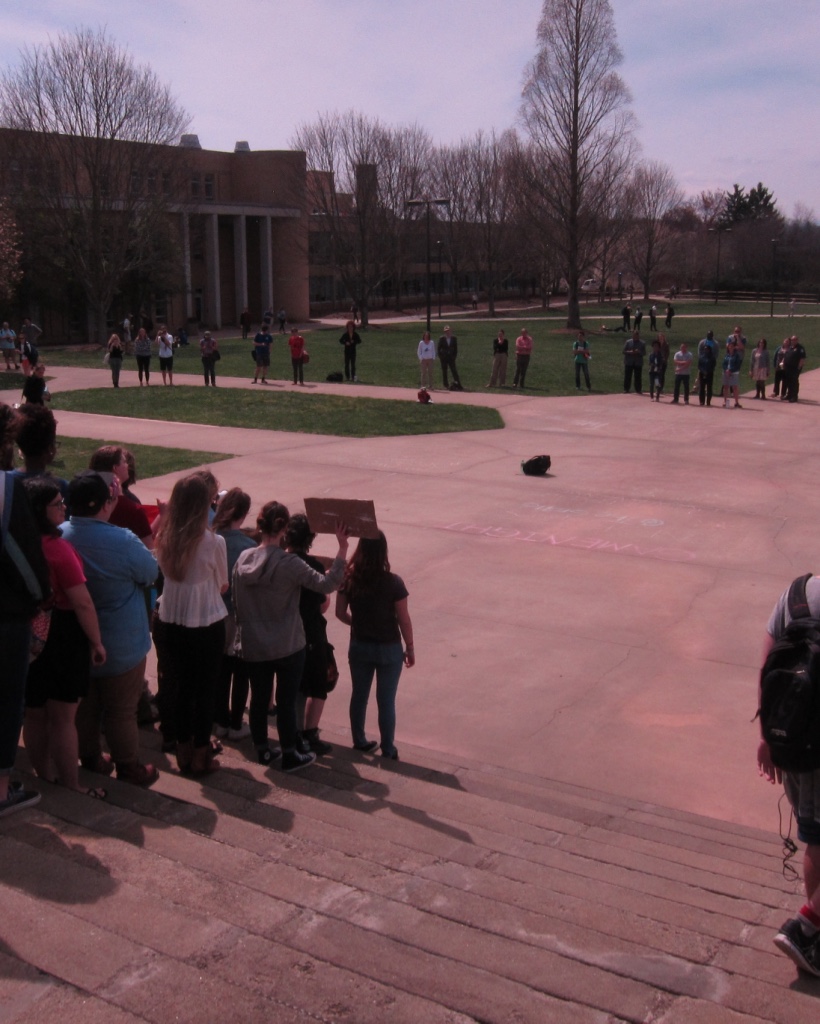 I snapped a few pictures of the protest, zooming in on the various activists with their blatant “Fuck you, McCrory” sentiments. One of my friends, however, brought it to my attention that I should photograph the lone woman standing off to the sidelines. Holding a sign above her head that said, “I would participate in this protest, but it would get me fired.”

I asked the woman if I could take her photograph. She hesitated, as the thought of getting fired really did trouble her, but figured she was already raising the ire of the administration enough and conceded. It was to me an irony that the administration was standing dutifully in front of the library, praising the student body that they “had birthed” to “make an impact,” while a member of the faculty actually telling the truth was neglected. Within minutes, she was gone. 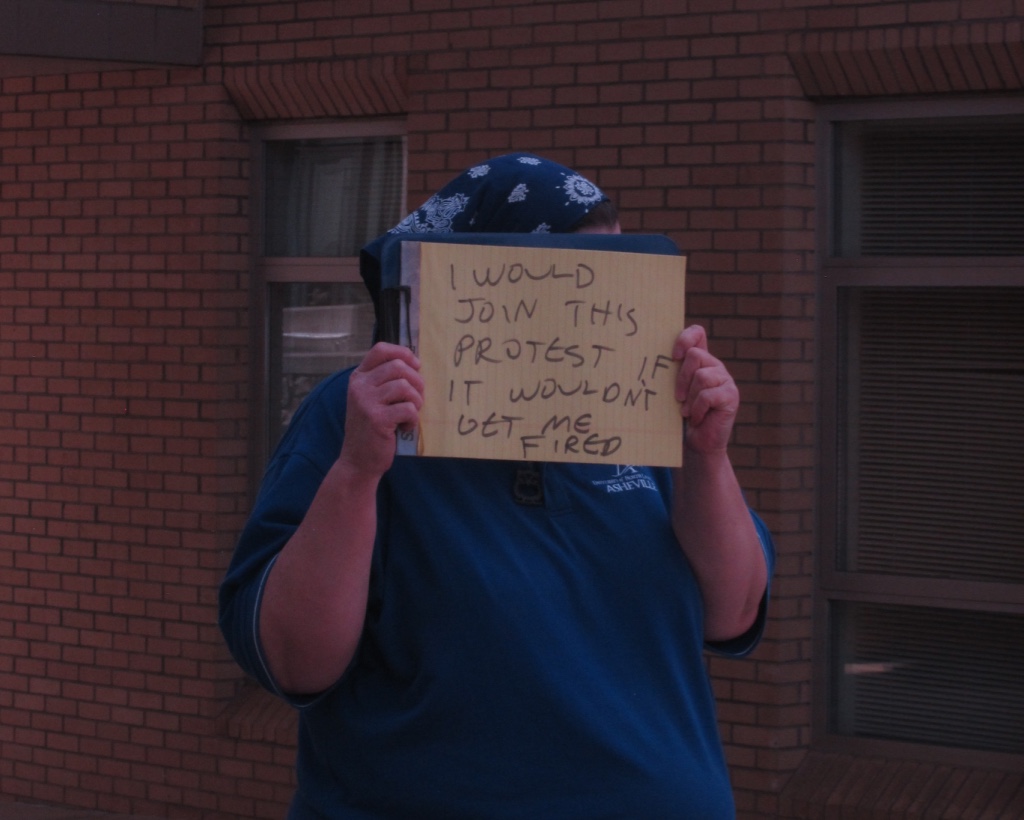 One of the most sincere protests that occurred within the academic year was when the Divestment Coalition stormed the Chancellor’s office, confronting her and demanding that she divest from fossil fuels. To me, this was a step in the right direction: actually confronting the source of power and not settling for an area designated by the administration where students are told, “Aw, you wanna protest? Here you go. Here’s your patch of land. Call the news!”

If you break down the word protest, it becomes evident that it ultimately mean to PROactively TEST the boundaries and limitations of the law(s) that have been imposed on the populace. Having a voice, protesting, is not effective when people stand on a pre-determined patch of land and are complacent within authority’s bounds. In downtown Asheville, the place that the city has designated for protests just so happens to be the plaza where the Vance Monument rests. For those of you who don’t know, Zebulon Vance was a slave-owner and the market where slaves were sold rests underneath the memorial. It’s an insult to everyone who comes there to protest, for Bernie Sanders, for May Day, for Black Lives Matter, etc.

This is why the protests in Baltimore and Ferguson were successful and notorious, because the people realized that in order to make a difference, they would need to move off their designated patches and get in the police’s faces. This is why they were tear-gassed. This is why student protesters, at UNCA, at the University of South Carolina, and so on, need to stop participating in token-protests. Storm the Chancellor’s office. Storm the city hall. Don’t settle for complacency.

Until then, I’ll be there photographing, documenting the voices that need to be heard.