It’s music for people who cry after having sex

The 1975 won two Brits last night and have nine million monthly listeners on Spotify – they are without doubt one of the most popular and successful bands around. But unfortunately, that doesn't stop them from being the lamest band in the entire world.

Look, there's nothing explicitly wrong with the 1975's music or anything offensive about it either. I'll be the first person to admit Somebody Else is a banger – it feels like you're walking straight through an episode of Made in Chelsea. Their music is "nice". It's irritatingly optimistic. It's pure H&M changing rooms. But that isn't enough to save them.

The problem with the 1975 is they take themselves too seriously, mistakenly thinking they are making some divine contribution to art and culture when really they're making music for people who cry after having sex.

They are performatively woke, their lead singer Matt Healy is just cringe af and even their fans don't really know why they like them.

They're a huge cliche but pretend not to be

Here is the video for a song called "girls", a song about girls, featuring girls in lingerie playing their instruments. It also features the not-at-all creepy lyrics "Oh give it a rest, I could persuade you. Give me a night, I’ll make you". It feels like they're trying to poke fun at the industry but it just doesn't work. Being a generic pop band is fine guys, but if you're gonna do it, own it.

A generic pop band should not be taking themselves this seriously

Frontman Matt Healy told The Guardian: "The idea of starting in a room and then bleeding out across humanity, the idea of one of my songs being on in a car while people are having an argument that really matters to them, or a song being on when somebody has that moment when they feel really alive."

This man also gave us the 1975 album title "I Like It When You Sleep, for You Are So Beautiful yet So Unaware of It". It's like William Shakespeare suffered a fairly severe blow to the head and then took out a crayon to write his sonnets.

If you need further evidence, watch this clip of Matt Healy doing his best impression of that bloke at every afters who turns the conversation to something serious:

Despite being from Cheshire, Healy often adopts a Cockney-sounding accent when singing, with surely no better example than on Chocolate, the song that made them famous. "Alroit guvnor, we'll go where nobody knows innit, oop and my car smells like choclit".

It's exhausting. We've already been subjected to this mockney fakery with Kate Nash, and the only reason everyone thinks Foundations is a banger is because of poetic lines like, "You've gone and got sick on my trainers, I only got these yesterday, oh my gosh, I cannot be bothered with this."

Did you hear about the time they smoked a peculiar looking cigarette under the table at the Brits in 2017? These guys are pretty fucking crazy!

Oh, and this one time Matt Healy woke up in the middle of the night to find their drummer George downstairs in his house because he didn't have any weed so he just came round at 3am. These are adults pushing 30! What are they like!

They are performatively "woke"

Fans of the band tell me The 1975 stand out because they are the only artists writing music that is "woke".

As Matt Healy accepted their second Brit award last night, he read out an excerpt from Laura Snapes' Guardian piece, calling out misogyny in the music industry. It's an important issue, and I'm glad he's talking about it.

Someone should probably tell them they're not the only woke band on the planet though, or the mouthpiece of our generation. When Matt Healy thanked fans for their Brit award today, instead of the standard thanks he went for "it's not often a left leaning band is celebrated for a single body of work in that way". I forgot that all previous winners, the likes of Adele, Stormzy, David Bowie, Arctic Monkeys, Florence and the Machine, are massive raging Tories.

Thank you all so much for your wonderful support. It’s not often a left leaning band is celebrated for a single body of work in that way – we are so humbled and owe it all to you guys who come to our shows and harass me about Antichrist. Love you so much xxxx @BRITs

Luckily, Healy's wokeness stands up to genuine criticism. When a 19-year-old fan called him out for some dodgy tweets, he replied to her: "I resent being 'educated' by a Harry Styles fan account".

Matt Healy needs to be stopped

Question: Who does Matt Healy think he is? He knows he's not Jesus, but then again, he did say this: "It was maybe about the search for God or my envy of the faithful. There is an element of feeling a bit like the Messiah. Well, not somebody who’s here to save humanity, but somebody for whom the world does truly revolve around them."

What is life like on planet Matt Healy you might wonder? Well, his dog is called Allen Ginsberg because how else is he going to let people know that he sometimes likes to read. He also says he struggled with becoming so popular and having everyone fancying him, going so far that when one woman shouted out at a concert that she loved him, he replied: "You don't have the right to love me." 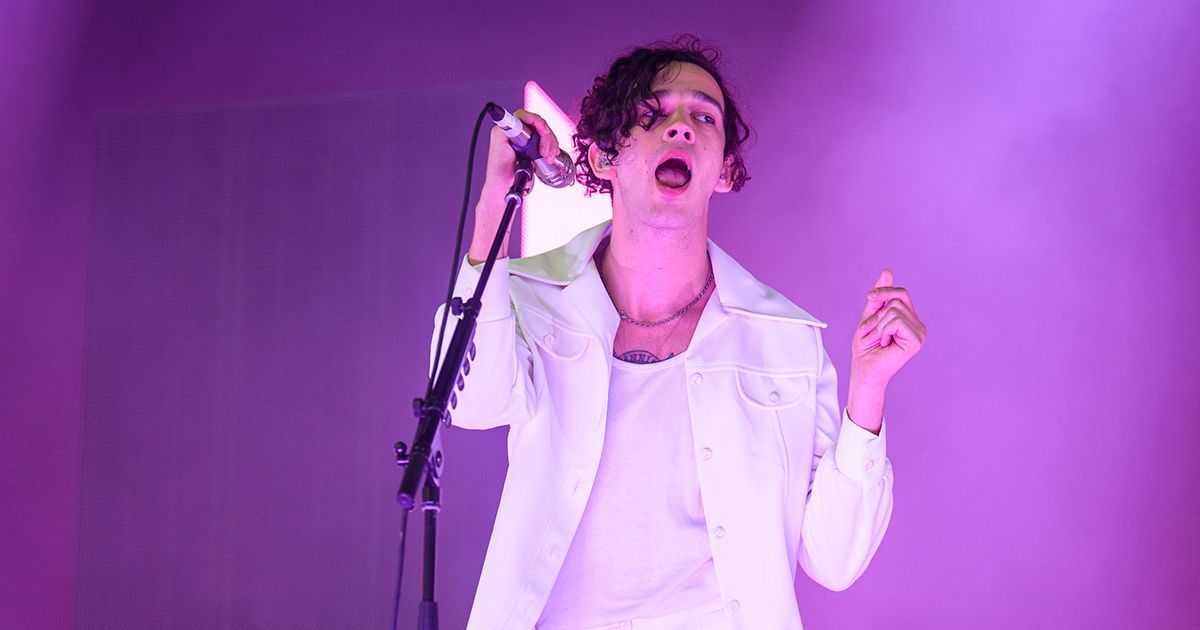 Their music is nothing other than 'nice'

I gave some fans of The 1975 the opportunity to defend the band, but after speaking to a few of them all they have to say in defence is their music is "nice", "chilled", "palatable". So are Coldplay, the only difference is The 1975 make music for people with haircuts.

To some people the 1975's lyrics are the most deep and profound lyrics they've ever heard. We've all had a breakup mate, it will get better.

No, we get it, we're in on the joke too you know! This the basic concept for their video for The Sound. In the video phrases like "vapid derivative pop", "pretentious unimaginative annoying", "boring recycled wannabes" and "frivolous bubblegum manufacturers" flash up on the screen.

They did it again when they performed it at The Brits in 2017. It was confusing for everyone, with many thinking there was a technical glitch. And who can blame them – they were probably thinking surely no artist is self indulgent enough to do this. How wrong they were. "Nah guys, we know what you think, that's the joke dontyougeddit!?"

The 1975's music isn't offensive. It's not even bad. It's normal and nice and easy. I'll hold my hands up: Give Yourself A Try is a good song. But you can't deny that it would be a bigger banger if it was literally any other band playing it. The 1975 are the worst band out there right now, not because of their music, but thanks to everything that comes with them.

Here's some more articles we've written about people who are also trash: