Happy Birthday to Sir David Attenborough, the greatest nature filmmaker of all time

Sir David Attenborough is to nature documentaries what The Beatles are to music.

Born in 1926 in Isleworth, west London, Sir David’s 50-year career as a broadcaster has taken him to Africa, the Antarctic and to places very few humans get to see, like the Amazon and the Galapagos Islands. All in all, this makes him one of the most travelled men on the planet.

He’s also one of the best educated too. Sir David might have studied natural sciences at Clare College, Cambridge, but now he has 31 honorary degrees too. He’s classy: according to his press officer, the great man doesn’t even use email. Instead he replies to fan letters and requests by letter only.

But crucially, Sir David Attenborough has still got it. Last month, at the age of 89, he abseiled down a 50ft wall to mark the opening of a new conversation centre. He could easily have recorded a video message, performed a speech or shaken a few hands. Instead, he climbed down the side of the building, which was, fittingly, a “living wall” of plants and foliage. 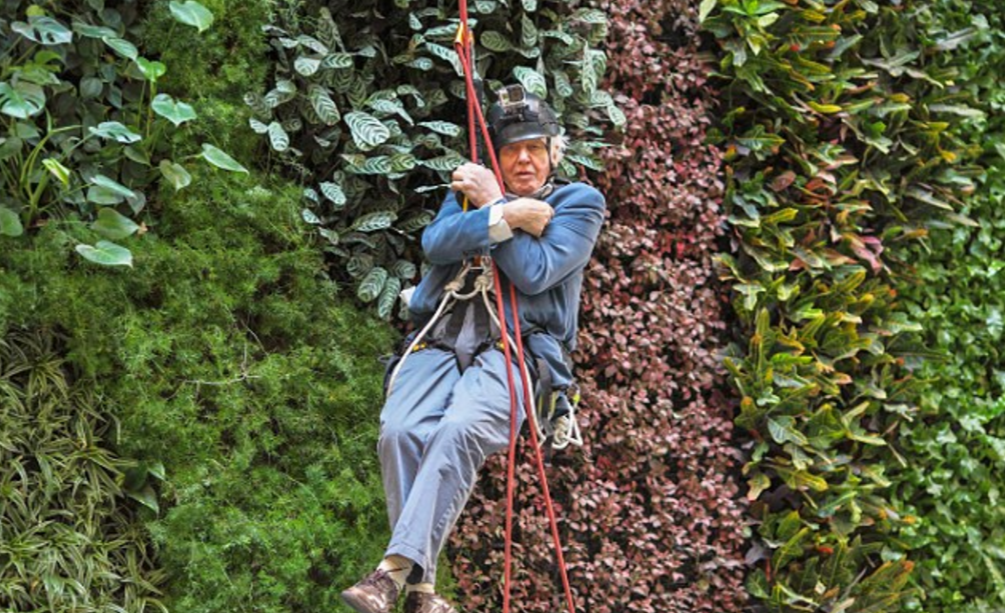 He still tours universities to lecture about conservation. Back in January, a planned talk at the University of Leicester was fully booked within seconds. When was the last time you saw a club night sell out that fast? The man inspires frenzy. The only thing larger than David Attenborough’s fan base is his passion for conservationism.

The weekend before his 90th birthday, Sir David opened a nature reserve in east London.  There he said: “We are part of nature and if we lose contact with the natural world, you lose contact with a great source of pleasure and delight which is your birthright.” Of course he’s right, and the planet is something Sir David has always taught us to cherish.

From Frozen Planet to Life on Earth and everything in between, here our some of our favourite Sir David Attenborough moments.

Probably the best bird clip of all time. One penguin turns to a life of crime to build the perfect nest. Shame the other penguin is having none of it.

Everyone loves sloths. Everyone loves Sir David. This is what you get when you put them together. The way that sloth turns around is something special.

The size, the camera angles and the way it moves, to the soundtrack of Attenborough’s narration. Perfect.

Vintage Attenborough: just look how calm the gorillas are around him. At one point one of them starts playfully pulling at his leg.

It’s not just that tiger cubs were captured on film for the first time. Sir David Attenborough and his team got this footage by attaching hidden cameras to elephants.

If Sir David Attenborough howls, obviously the wolves are going to howl back.