What they won’t tell you in citizenship class: governments don’t matter any more. Religion? Forget about it. Democracy? How about LOL, ROFL, LMFAO.

There are only companies and brands. There’s only Accenture and Forbes and PWC and CNBC and Pepsi and Expedia and Crimson Hexagon and Aldebaran and Foreo and Ometria and Deloitte and Exxon and Facebook and Unilever. There are their subsidiaries, their holding companies and their apps, bound by financial products and systems nobody entirely understands.

The world is a business and these are the nations of the world. Many of them are on show here today at Millennial 2020. Millennial 2020 describes itself as “the future of nextgen commerce”, a summit committed to delivering a “curatorial, experiential and personalised experience for attendees”. Basically it means a lot of companies set up stalls and lounges in Victoria House on Bloomsbury Square and talk about how to sell their shit to young people. It’s what those in the industry describe as an industry event. 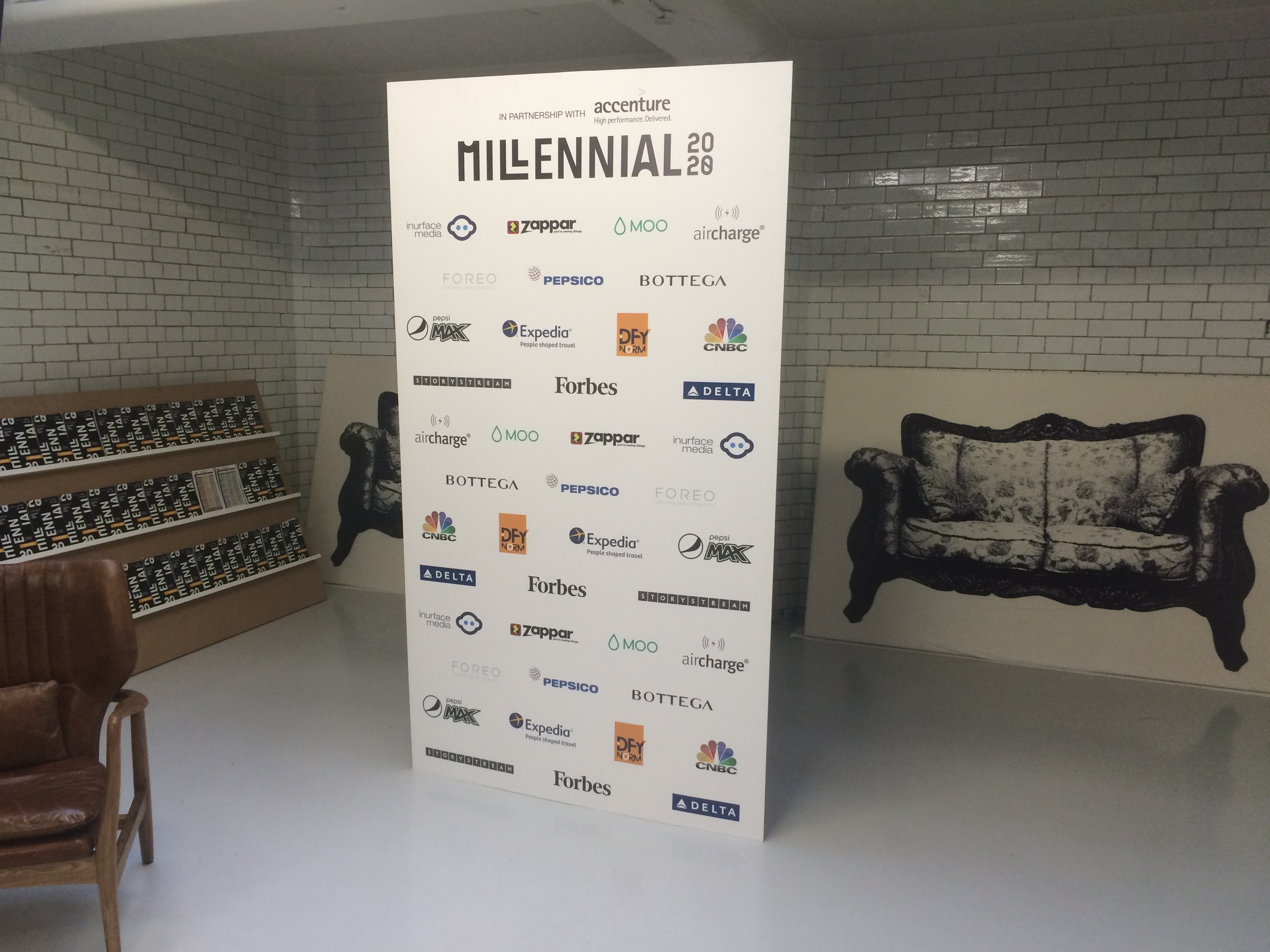 And lo, there were industries

Remember when industry meant pitheads, slagheaps, pipe smoke, furnaces, chimneys – when industry meant industry? Me neither tbh. The industries in these rooms are fairy dust, they are castles in the sky, they require a working WiFi connection and all the juice in your iPhone. That’s not to say they aren’t real industries. Of course they’re real. We exist in a dual reality: there’s the reality of pitheads and slagheaps and chimneys. And there’s the almost supernatural reality of the brands at #Millennial2020. 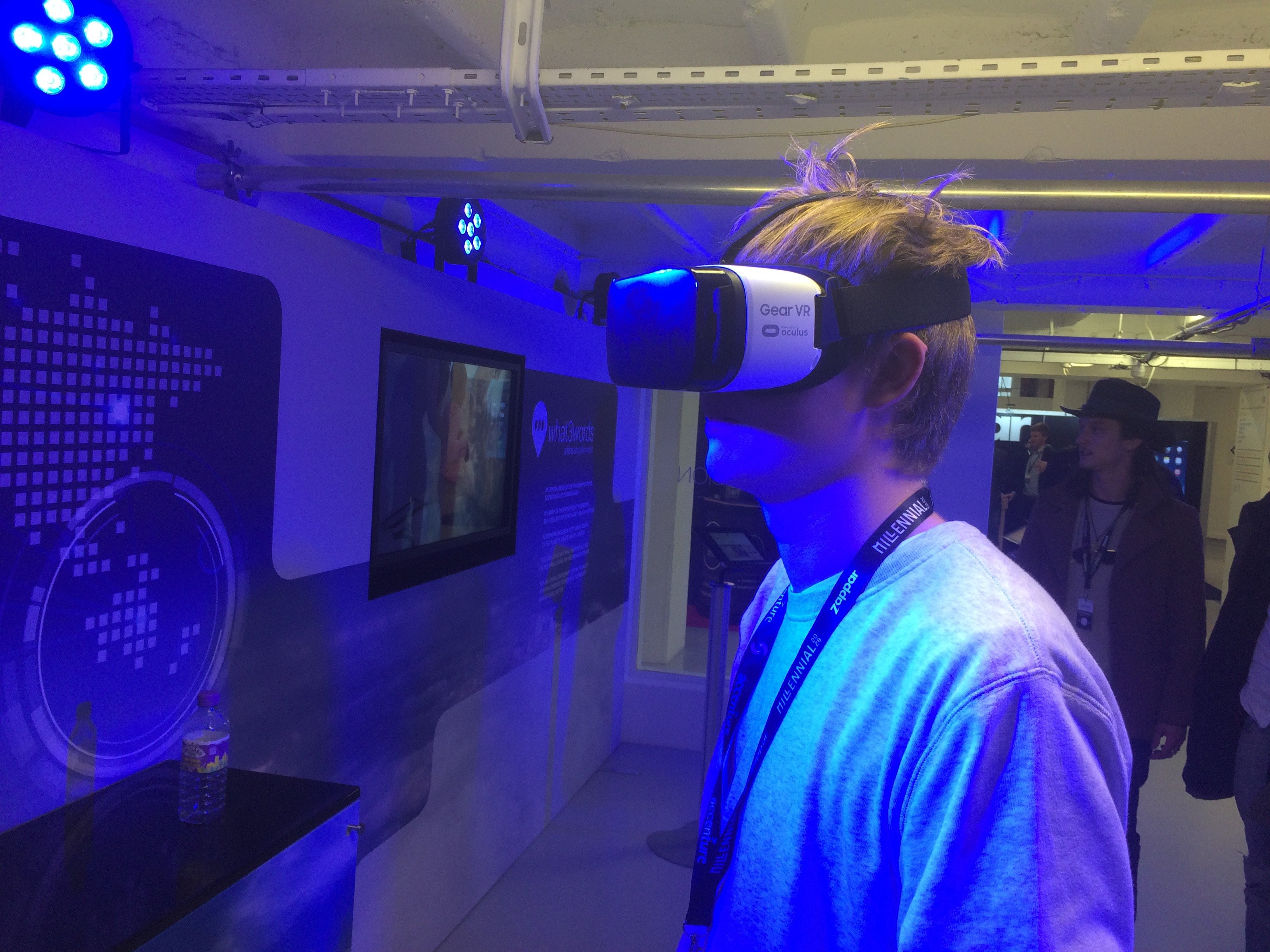 Who needs reality reality when you can have virtual reality?

For example, there’s Chippd (no, I don’t know where the “e” went either): a platform for sharing digital content through physical platforms. Or as the guy giving me free stuff says “physical objects that tell digital stories”.

I ask him what this actually means and he hands me a greeting card with the words “GAME OVER” on it. This is the physical object. What about the digital story? Well, the guy explains, say I wanted to break up with my girlfriend. Theoretically I could upload a 60-second video into the card using his app. It could then deliver the break up message to her (as long as she also had the Chippd app). Before I put it to him that it might be easier to use Snapchat, or you know, do it in person, he says, “pretty funny way to break up with someone isn’t it?”

I nod my head to suggest modest agreement. 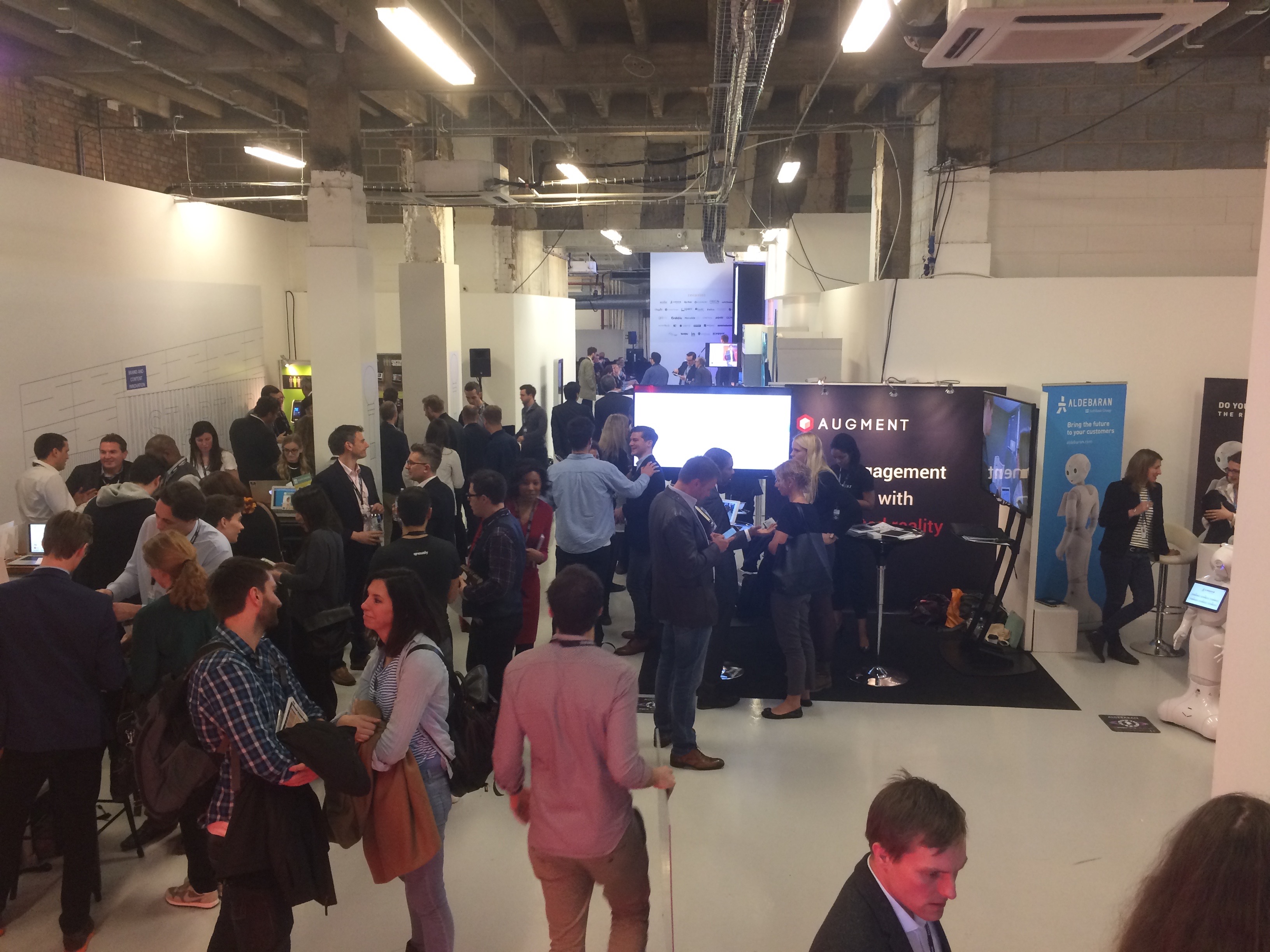 The spaces at Millennial 2020 are divided between the informal and open plan, arranged for spontaneous networking, chance bollocks and the lecture theatres – one of which is called a “content hub” – where all the seats have a sturdy, Victorian design but are rendered in hard, transparent plastic.

There are many old sentiments being re-packaged, re-shuffled and re-issued as something new in these rooms. A man in his 40s says millennials are known for not liking bullshit. Well who does like bullshit exactly? A woman says she “loves the 24/7 concept”. This is mixed in with conspiratorial business chatter, a guy with glasses (all the guys have glasses) saying: “Yes, this is an interesting time for us. We don’t know whether they’ve been appointed or offered it but we know it hasn’t been announced.” I can smell good flat whites and when someone tells his colleagues that they fancy a “digital beer” (what), I realise I could do with some refreshment.

I head to the Oxygen Bar. 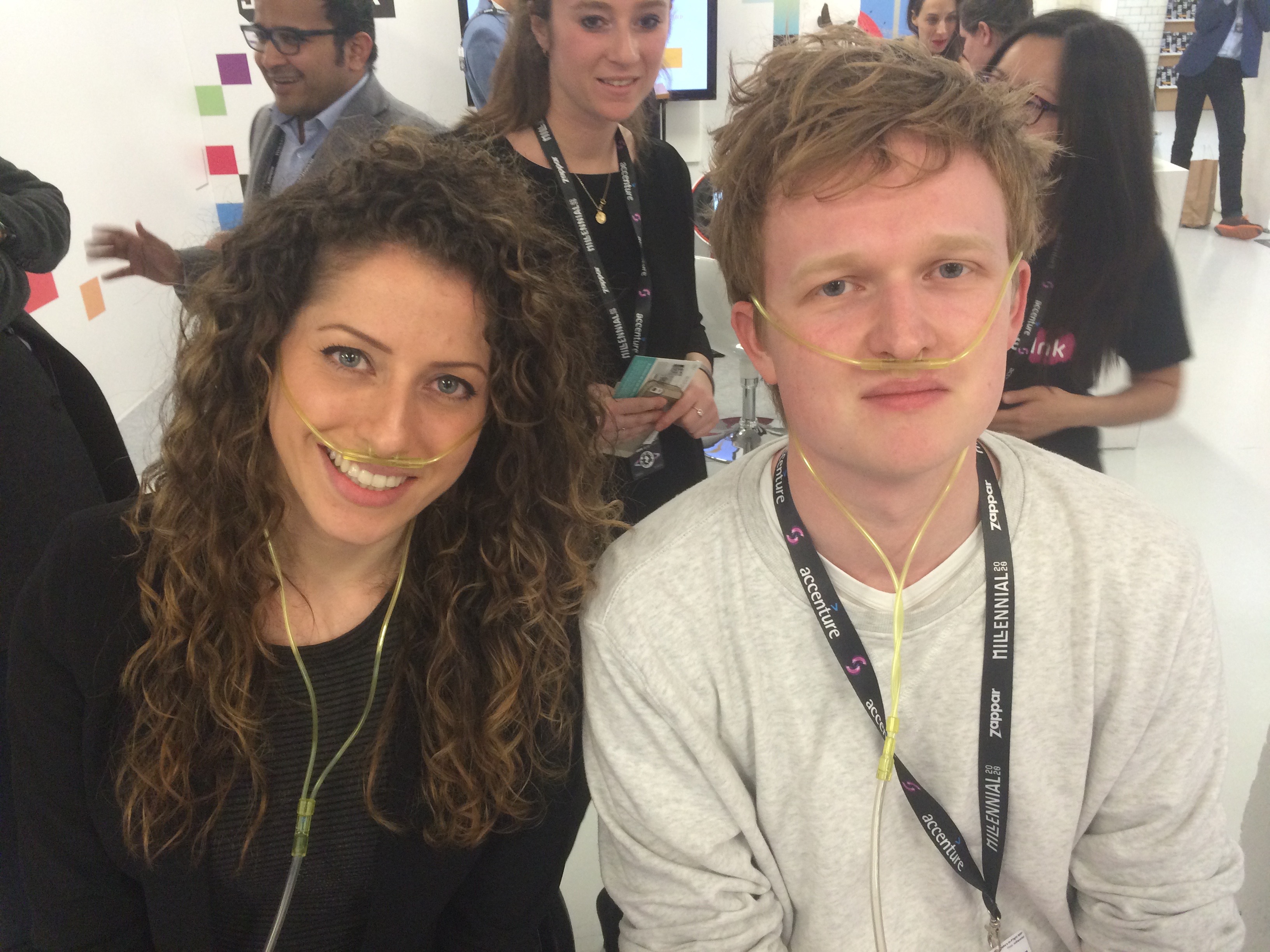 We look like we could be sharing the same serious illness

Does it have anything to do with millennials? She starts speaking about targeted emails for a very long time and I’m quite distracted by the plastic tubes she’s inserted up my nose. The effect of it is rather like inhaling that pink mouthwash you get at the dentist – clinically healthy. 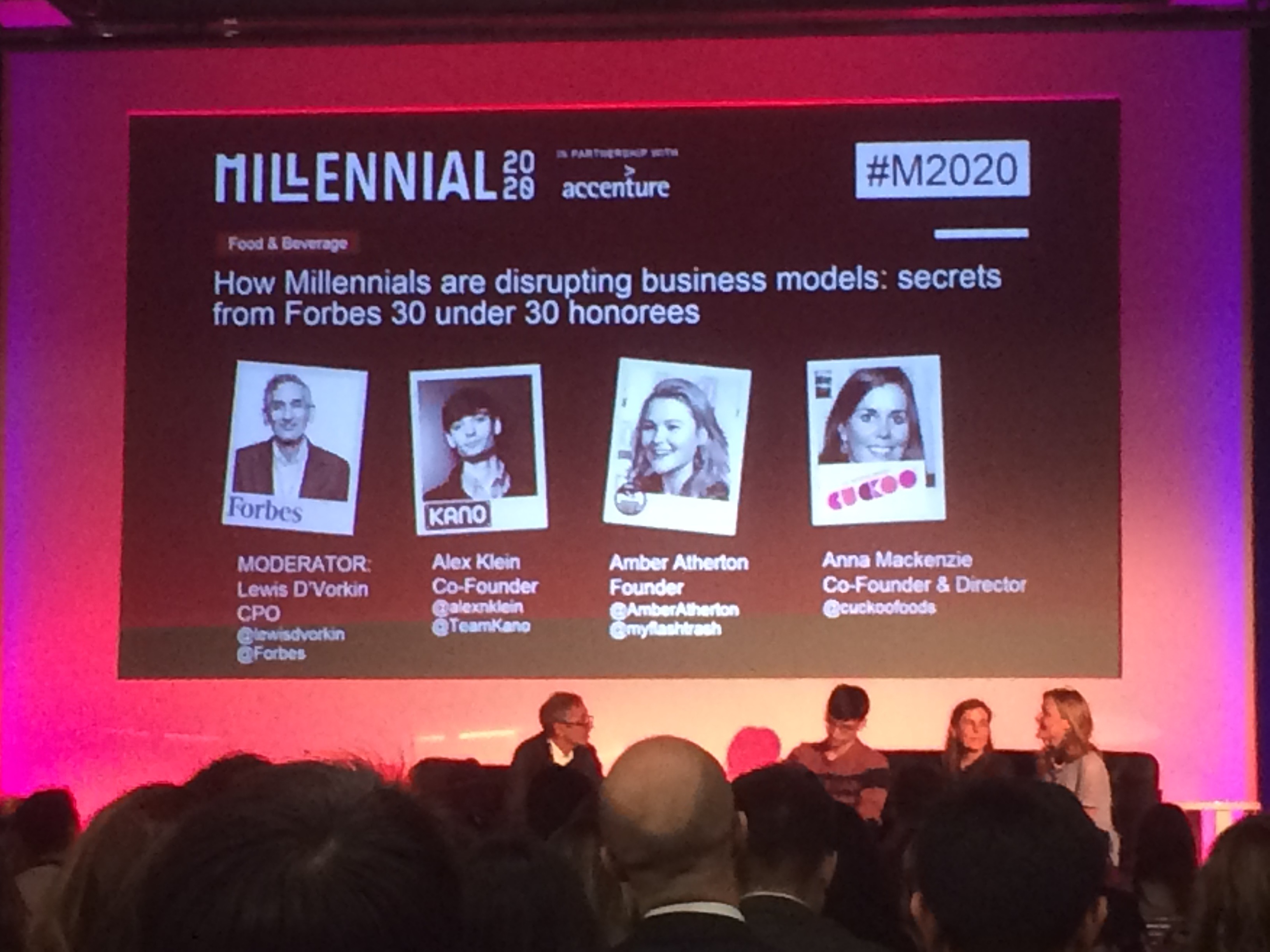 Big up each and every member of this panel

There are panelists, and they are strategising and theorising. Someone describes the moderator as too smart for this very smart panel. The panelists have offices in Shoreditch, they recently received VC investment. One says her company is valued at £5m.

But what does it all mean? I wish I knew – it’s pitched at me.