20-year-old Ty Jones has just finished studying Mechanics and is about to start an Engineering course at Talbot Road College. He also really fucking looks like Ed Sheeran, and has been nailing down the lookalike game for the past five years thanks to his unusual skills.

Ty started his lookalike work all the way back in 2010 after his mates started commenting on how much he looked like Ed. Since then he’s played gigs, proms, caused a riot and starred in a Channel 4 programme, Lookalikes, which had its pilot episode on Monday night. 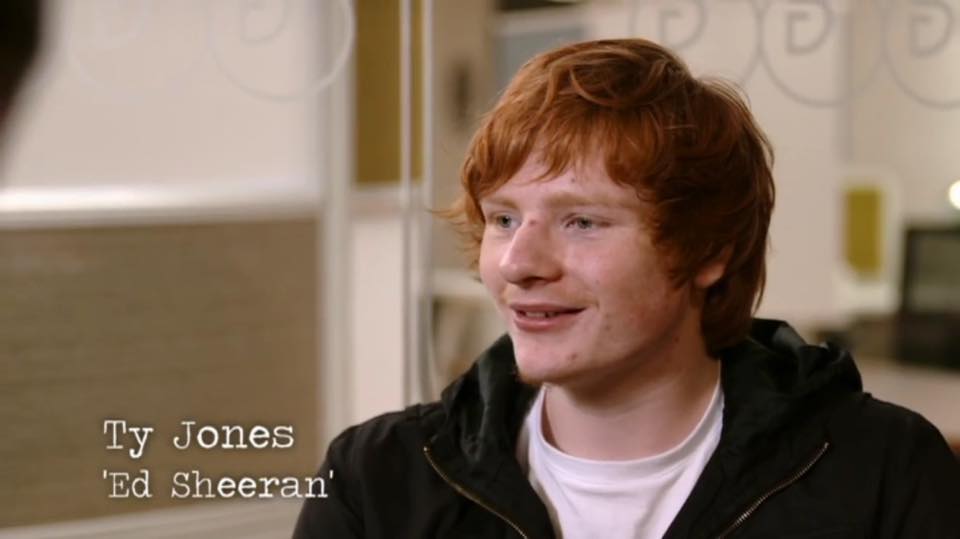 He said: “It started when my friends told me ‘there’s this guy who’s on the internet he’s been making a few videos and he looks just like you, it’s weird’.

“I did some research and realised he does actually look like me. It started from there really. I went to a lookalike agency four years down the line and thought I’d give it a shot professionally. I do mostly gigs but I usually mime, I can’t really sing like Ed.” 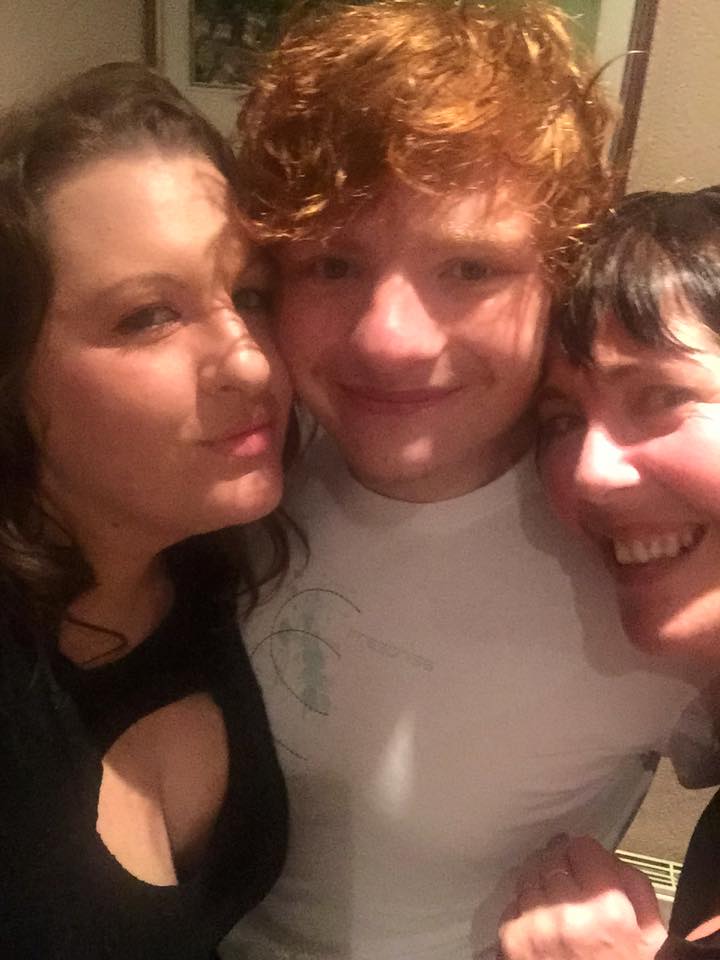 Along with his TV work, Ty, who works with Manchester based agency Costello Entertainments, performs regularly at weddings and local gigs to a massively positive response, earning around £150 on average per event. He told The Tab: “As soon as I walk into a room everyone crowds around me taking pictures, it gets pretty hectic.

“This is my part time job when I’m not studying. I’m on leave now and also work with my mate’s boss who’s a builder, so I do a bit of building work and random bits of work here and there too.

“The biggest thing I’ve done is probably a prom actually because there were so many people there. They all crowded around this nice car I was in – they were actually convinced I was Ed Sheeran. The people I’d booked it with had two guys doing security at the back so it looked like the actual thing and people were going mental.”

“Sometimes the part will involve people not knowing I’m Ed Sheeran, but other times I’ll just ride up with my dad.” 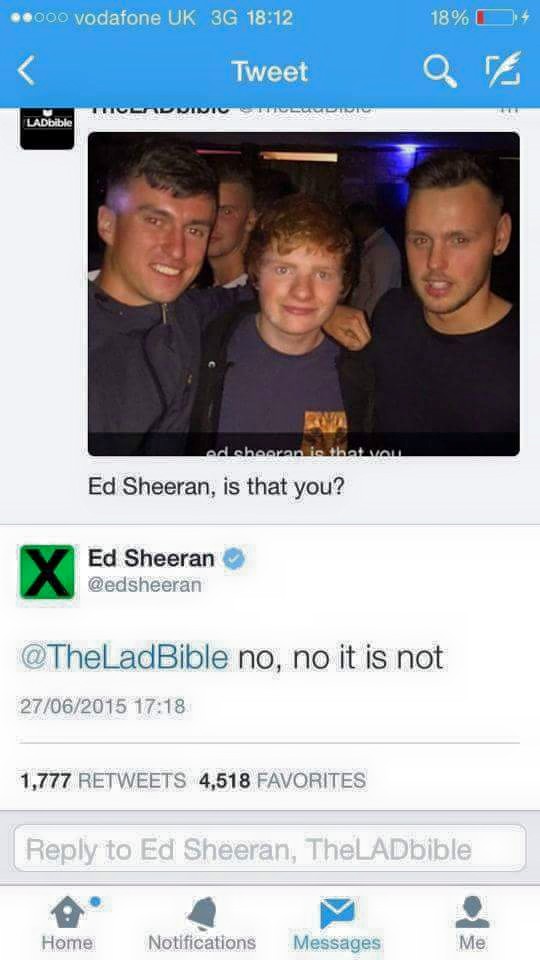 Crowds get hysterical for the Manchester Sale local, who also convinced so many teenage girls he was the real Ed outside his concert at MEN that police had to intervene before the mini-riot spun out of control.

Ty said: “I went to the MEN in Manchester when Ed was playing to take pictures with his fans and stuff and get myself out there, but I ended up making a riot. Everyone was around me taking pictures in the tunnel and the police had to drag me out. Girls were having panic attacks and everything in front of me.

“I thought ‘this is crazy’ – even the police thought I was him. They were like ‘Ed what are you doing coming out this exit?’. I had to wait in the police car for like an hour for the crowds to die down.” 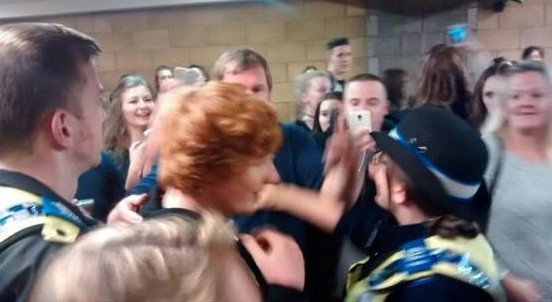 Even outside of his lookalike work, Ty has people convinced and regularly gets asked for autographs. He said: “It’s mad. I’ve gone along with it and signed things once or twice but I feel bad about it, so most of the time I have to just tell them no I’m not really him.”

“There aren’t many other Ed Sheeran lookalikes out there. I’ve seen a few and showed them to my dad but he says they don’t look like him as much as me.” 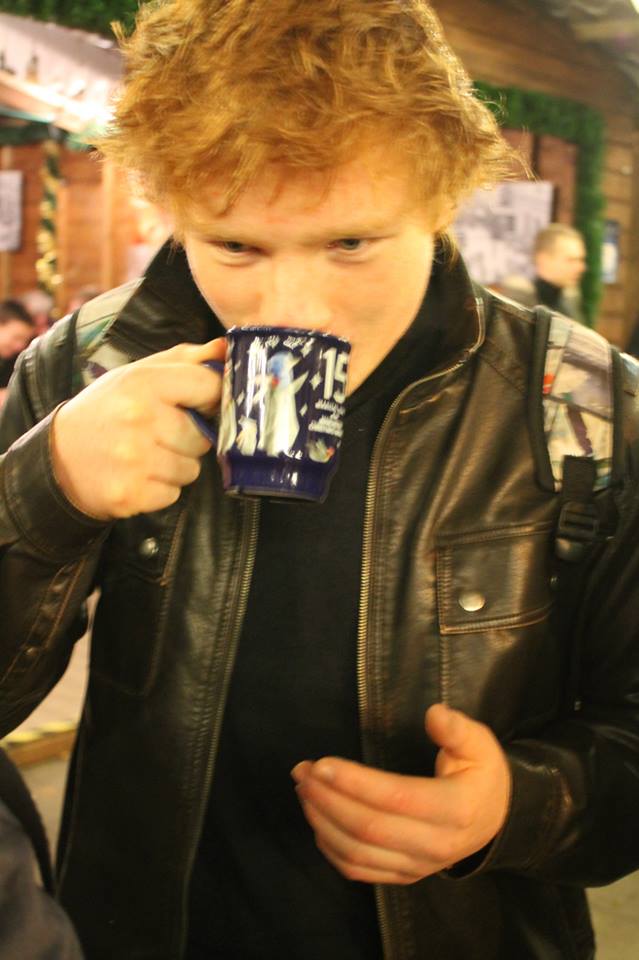 After his appearance on Channel 4’s Monday night show Lookalikes, excitable fans spammed Twitter, gushing about how much Ty looked just like the real thing.

The @edsheeran lookalike on this show tho #lookalikes

For Ty, keeping up the facade is fairly straightforward. “I don’t have to do that much to keep up with Ed. I have the long hair and wear jeans like him, but I just sort of style my hair to look like his, put a bit of wax in and that’s it really.”

The lucky Engineering student has even met Ed himself, after a picture of Ty at a rave went viral when people thought it was the singer. 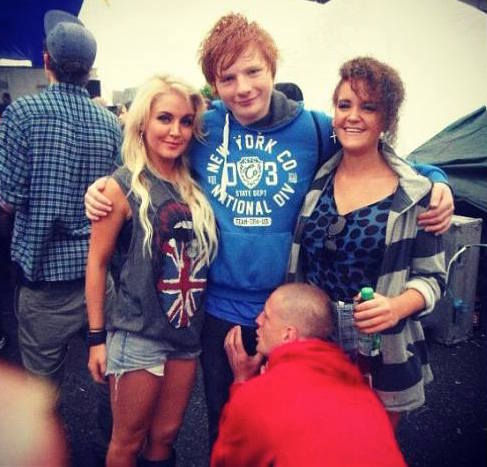 “It went around the internet and Rizzle Kicks found it and tweeted it to Ed. He looked at it and asked ‘wait is that actually me? When was I there?’. So he tweeted out that he wanted to meet me.

“We met up at the Manchester Apollo and had a few drinks back at his hotel. He was really down to earth and he was pretty gobsmacked by how much I look like him.” 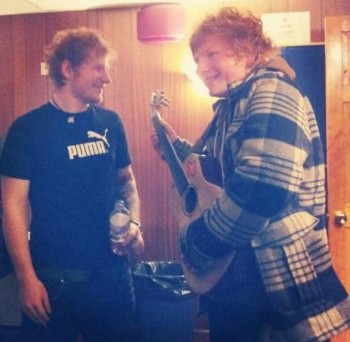 With the real Ed

For Ty, the lookalike business isn’t just his part-time job, but a genuine career option. He said “I really want to keep in this line of work long-term, but it depends on how famous Ed is really.

“It’s helped me so much – I had very few grades and still do, so having this has given me a massive chance.”