Jack Renshaw, head of BNP Youth, posted a bizarre and unlikely attack on his supposedly homosexual pet pooch because he “challenged his principles”.

The leader of the group took his views a little bit too far when he posted a serious status on Facebook naming and shaming his dog having felt that his principles were personally under attack.

He wrote: “I wish my dog would stop licking the penises of other male dogs. I love you, Derek (my dog) – but – don’t challenge my principles because my principles will likely win.” 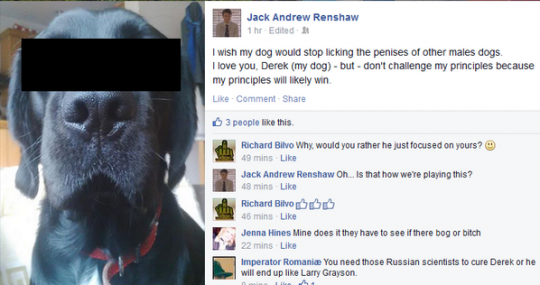 The student then warns his dog that his views are “likely to win” after criticisms on his dog’s sexual preferences.

Unsurprisingly, Renshaw was faced with abuse after the status when Facebook friends take the piss out of his serious concerns over his dog’s sexuality. Having liked an article on Russian scientists who claim to have cured homophobia, his friends shared their advice on how he too can cure “Derek” the dog.

The Manchester student who created a controversial video in May with fellow sinister students, called Fight Back has now gone further to disown his dog for “licking the penises of other male dogs”.

The disturbing video features a montage of a bunch of frumpy youths, blaming minorities for being a threat to British culture, so it struck as no surprise when the leader posted this status. 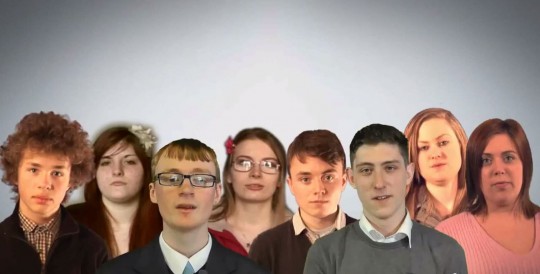 The finalists for Britain’s Ugliest Students or BNP Youth?

The uncharismatic crew end their rant on a monotone message of “this is not a request, this is a demand” after attacking “militant homosexuals” and “heartless zionists”.

In the video, they attack:

• Militant homosexuals who undermine the family

• Heartless Zionists who send soldiers to die for private profit

• The cultural Marxists who infest our teaching establishment

• Stephen Lawrence’s mum (because the media pander to her)

Comments on the video, entitled Fight Back, were largely supportive.

One user wrote: “All dislikes come from those who are with the enemy, either the brainwashed ignorants, or the mass immigrants who are being permitted to enter Britain and its White Nation brothers by those who are responsible. Stay strong and Unite! Hail White Pride!!”