Dear commenters, let me explain feminism to you

Tab columnist and Durham student Flo Perry answers objections made by Tab commenters, including: “it’s just banter” and “Stop moaning, women in the third world have it so much worse”

A well-known feminist proverb is that if you need proof for feminism, look to the Internet commenters. We’re normally too busy not shaving our legs and recycling our moon cups to reply to them all, so I’ve picked some arguments that keep coming up and kindly explained why I disagree. 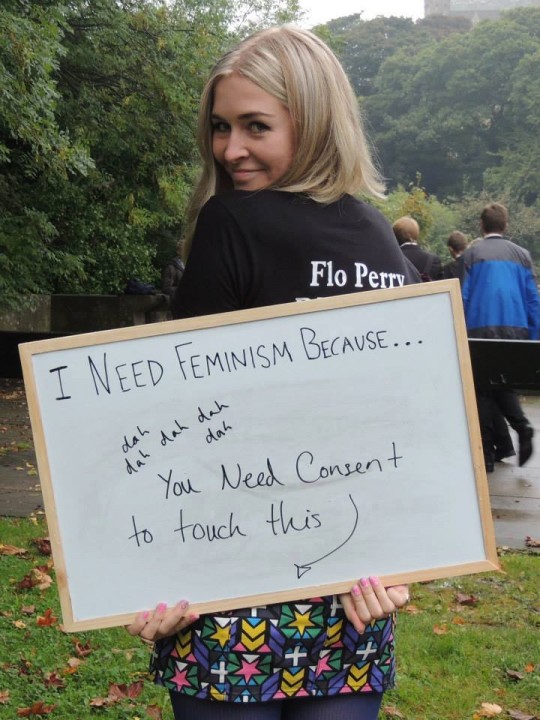 Stop saying all men are rapists, I’m not a rapist!

When feminists seem to imply that any man is a potential rapist what they are actually doing is trying to change the world’s perception of what a rapist is. A lot of people, through some poorly thought out advertising campaigns by the police and too many CSI episodes, have an idea that a rapist is a creepy man in an alley. 90% of the time he’s not. He is your friend, colleague, teacher, father, uncle, boyfriend, or husband. And if we realise that rapists can be seemingly nice people, then the hope is that the report and conviction rate will go up. If you, Tab Commenter, feel like I’m saying that you personally are a rapist, I’m not. I don’t know anything about you. Thankfully.

Learn to take a joke! We don’t mean it – it’s just banter!

The game EliFlex refers to is the “it’s not rape if…” game. If a rape victim hears such a joke, I doubt they’ll be very happy about it. And since you never know who is a rape survivor, it’s best not to risk it. Also rape victims often say they didn’t report because they didn’t think they’d be taken seriously, or believed. Rape jokes don’t help with this. Plus the jokes usually aren’t that great. I could go on, there is just so much wrong with rape jokes.

The wage gap is there cos of babies

Choice is a funny one, it’s never free from influence. The major influence in these ‘lifestyle choices’ you speak of (babies) is that women and men are entitled to difference amounts of ‘maternity’ leave. It’s not all about the lost experience after the baby either. Companies are less likely to employ women they think might have a baby even if they’re not planning it. And apparently 1 in 7 women are made redundant while on maternity leave, so that’s not going to help. And maybe the women didn’t choose to have a baby and stay home and look after it, maybe that was her only option, but that’s a whole different argument to have (got to leave something for the commenters!).

Also the pay gap is actually larger in part-time jobs, which classically require less experience. Don’t know many part time CEOs. My favourite (least favourite) argument is that if women really were cheaper than men surely companies would be snapping them up. Companies pay men more, promote men more, employ men more, because they think they are more capable than women to do the job. Silly companies.

But like women have advantages too – it’s so much easier for them to get laid! 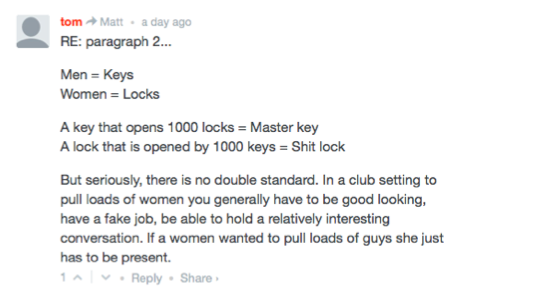 Okay I’ve picked an easy one! It’s not particularly hard to destroy Tom’s philosophy. In fact the slut shaming point he makes is so bad I’m not going to mention it again. His second point, that it is easier for women to pull and this is an advantage, is slightly (only slightly) more interesting. Girls do get hit on more in clubs generally. But this is not always a good thing. 9 times out of 10, the guy that hits on you in a club is not the one you want to go home with. They tend to be creepy, overly persistent, and often gropey. I’m sorry Tom but being able to hold a relatively interesting conversation is a plus for me. Maybe if people like Tom viewed women as whole beings with personalities and brains, rather than just a lock into which insert their key, they too would want their partner for the evening to be able to hold and interesting conversation, and the field would be more even.

I bet you still want us to pay for stuff though!

We’re actually not that mean. Intrigued male I totally agree! Of course we’ll split the bill. I’d love to buy you flowers!

Stop moaning, women in the third world have it so much worse

Every good feminist knows that privilege is a complex system and not all women are oppressed the same. Just because I won’t be stoned if I cheat on my husband doesn’t mean I should put up with being groped and catcalled. I don’t want sympathy for it, I’d just like it to stop happening. (Obviously I want attention, I write for the Tab.)

Men get objectified too. You’re campaigning for a double standard

Objectification isn’t great, but we all do it and it’s never going to go away. Sex sells and yeah, hands up, you got me, I like looking at a nice rig (and sometimes boobies too). However, three points:

First point is how women objectify men, it tends to be on the whole, nicer. You rarely hear a woman saying, “OOO I wanna suck his knob off. “ Yet you often hear a man saying, “She’d totally get it. I would destroy her.”

Secondly, it happens more to women. I wish more naked men were used to sell furniture. Idealised male bodies faulted around groceries on telly, but it just doesn’t happen as much! Coffee adverts seem to use as many naked women as men… but that’s about it. Go you coffee!

Thirdly, context! Girls haven’t oppressed guys for 1000s of years, and there isn’t a crisis of violence against men committed by women. So when women objectify men it’s much less harmful, as they aren’t fuelling a system of oppression. I can hear them already. PAGE 3 DOESN’T MAKE MEN VIOLENT AGAINST WOMEN. Well maybe not, but seeing women portrayed a sexy naked things, more than we see them portrayed as whole people, doesn’t help.

It’s not censorship, it’s boycotting! We’re not going to stop you from listening to Robin Thicke on your IPod, or looking at Page 3 on your phone in the library loos. Just making a political statement, you can still buy the Sun in Tescos. Take a chill pill.

But if I’m a feminist I won’t get laid

Ok, so more complex than it first seems. Hardly anyone has a feminist sexual fantasy. Power imbalances turn us on! Gender equality just isn’t that sexy. But neither is accounting, and loads of people do that and still have good sex lives (maybe?). Sexual fantasies should be just that, a fantasy, sometimes ACTED out in real life. The rest of the time you can be a feminist. Women, date more feminist guys, you can still play at gender stereotyped doctors and nurses, I won’t judge!

Um… hello Hamish. I am a lot of things, frumpy has never been one of them. And we’re not all the same! Feminists sometimes disagree, in fact we do it all the time. Germaine Greer said that no women can call herself a feminist until she’s tasted her own menstrual blood. By that definition I am not a feminist.

Have you got an opinion to share on The Tab? We are a platform for all views as long as they are sincerely held and well argued. Email [email protected] to share yours.