Meet the Bronies: The male students obsessed with My Little Pony

Meet the student bronies (that’s bros who like ponies, duh)

Most students find their niche identity at uni by signing up to sports teams, political organisations or voluntourism to cure their middle class guilt – but there are some who find their kindred spirits in a different way.

Across the UK more and more universities are developing active Brony Socs – a safe place for the armies of grown men (and smaller armies of grown women) who adore My Little Pony: Friendship is Magic.

Remember MLP – those plastic day-glo toys? You used to comb their hair until they got tangled and your mum chucked them in the bin? Well imagine that, except add puberty, testosterone and legions of male fans and you’re halfway to understanding the crazy world of Bronies.

But are Bronies as odd as they first appear? We tracked down some student Bronies to find out. 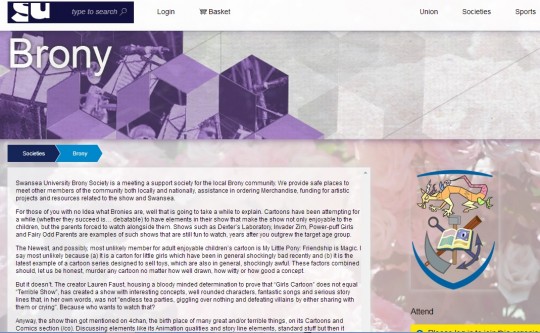 Brony Socs exist at unis all over the UK. Adam*, a member of the Brony Soc at Aberystwyth University tells us it’s not as weird as some people might think

“It’s pretty much a social group for Bronies in Aberystwyth who meet-up now and again to watch the show, play some games, or go for a night out and get drunk – We didn’t come to the town with 53 pubs for nothing!”

“Considering Aber is not the biggest uni, there are a lot more Bronies than I had expected. There are probably even more around, but don’t want to join the group or something.

“After all, Bronies are seen as complete weirdos.”

But for those Bronies without dedicated societies at their universities, it can be a lonely life.

Berenger Irwin, a 19 year old Computer Games Technology student at Manchester Metropolitan University says “Out of the people I know at my uni, only around 7 or 8 are Bronies.”

For student Bronies stuck without a dedicated society, meeting other bronies has to take the form of regional BUCK groups (an international Brony convention held in Manchester every year) or plain old online communication. Grim.

But how does all this pony-love affect your chances at pulling? David Bowden, a Mechatronic Engineering student at University of Ulster, shares a love for ponies with his girlfriend, but says being a Brony is “neither a help nor a hindrance” in finding love.

David, 19, told us, “On one or two occasions girls have been very excited and friendly when they find out, but definitely not in an attracted way. Mostly people are neutral about it. One time a girl, complete stranger, high-fived me in the street when I was was wearing an MLP bag, but I’m sure that doesn’t really count.”

Berenger Irwin agrees that the opportunity to pull a brony is a divisive issue for most women – although adds that bringing a pony plushie to a club is a “great icebreaker” and gets passed around while people dance with him.

For those that don’t know, pony plushies are a bit like this except you know, often not a sex toy.

“In Manchester a few girls would come up and start dancing with me when they saw the plushie” Berenger says, adding “But an ex hated the fact I was a Brony and thought it was weird so she kept trying to make me leave the fandom.”

“I think anyone who mentions they’re a Brony while pulling girls is a brave soul,” said Adam.

“But I’d imagine they’d most likely be put off – Unless the girl was a Brony too of course” (Adam’s girlfriend also likes the show, luckily).

It seems that Bronies across the board believe the show, whilst not helping their love life, certainly hasn’t made it worse.

Gary Smith, 20, says, “Well, it’s not hindered my chances with girls. But I’ve only ever had two girlfriends.”

“I think being geeky makes it harder than anything else really.” 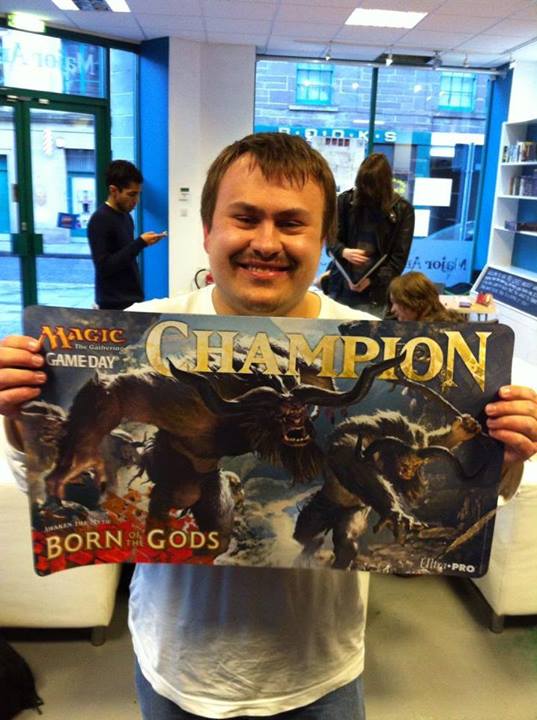 So you’ve happily pulled a Brony, but what about when you get back to theirs? Would you be put off by a bedroom covered in pony posters, toys, and stickers? Can you really enjoy a post-coital glow clad in his pink pony t-shirt? (It would certainly make for a very pretty after-sex selfie.) 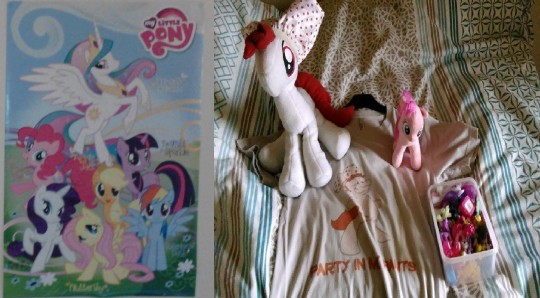 Pony ‘merch’ is a massive part of being a Brony, and it often doesn’t come cheap. Along with clothes, toys, and games, Bronies can also pay to attend huge UK Brony conventions – the biggest is BUCK in Manchester where many Bronies meet, connect and ‘brohoof’, “a friendly gesture between one Brony and another in the form of connecting knuckles together (or hoofs)”.

You can even go as far as producing yourself in pony form – which Berenger Irwin has done. After wearing underwear on his head at a Brony convention and getting included in a National Geographic documentary as “Pantsman” he coined the character “Pantspone” which he dubs himself in pony form. 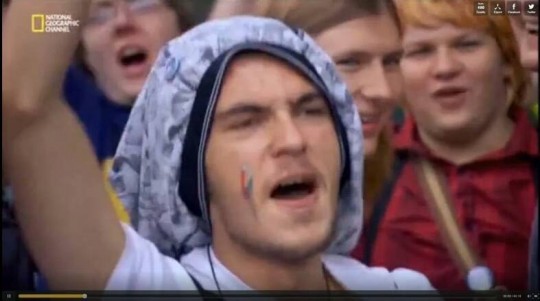 He also cosplays as Pantspone which is maybe a bit too far to becoming a giant pony-man, but it takes all sorts. 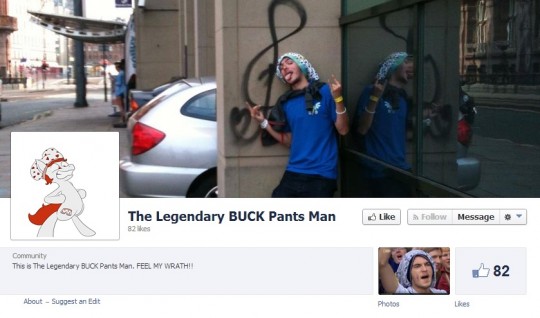 Pantspone Brony even has his own FB page

Of course there are Bronies who are less interested in pulling than they are perving over the ponies themselves. These Bronies (a small minority, I’m assured by the Bronies I’ve spoken to – but a creepy minority nonetheless) refer to themselves as Cloppers. 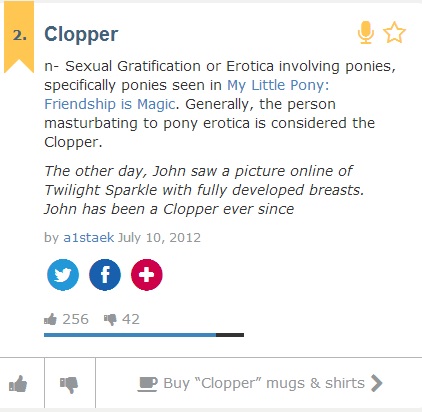 Now that was a depressing Google search… 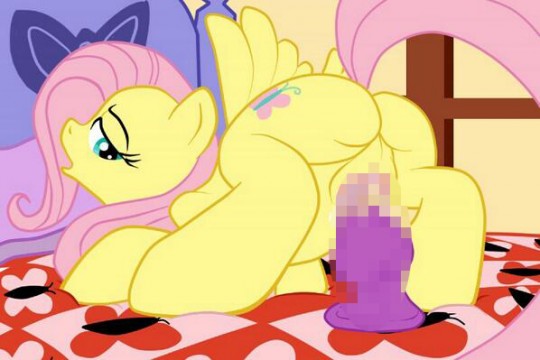 While seen by the Brony mainstream as a small, disturbed faction who tarnish the good name of Brony in the media and online, Cloppers are certainly the ones grabbing attention.

Cloppers are matched in creepiness only by ‘Grimdark’ which is basically taking the twee world of MLP and turning it into a post-apocalyptic horror with serial-killing ponies. Quite sweet, really. 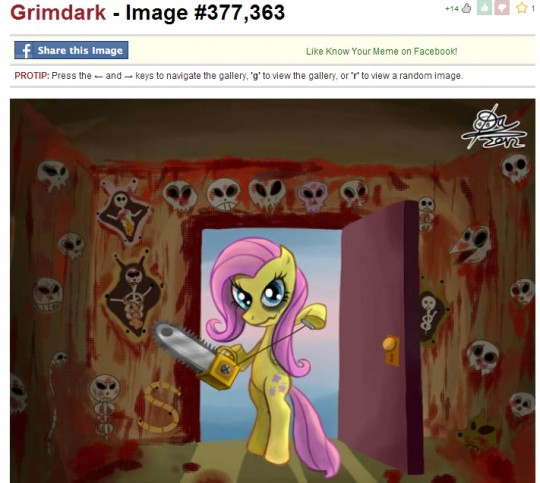 Lovers of both super creepy content produce their own highly disturbing fan art and fan fiction – and both prove that Bronies are not all sweetness and light.

Most of the student Bronies we spoke to were keen to distance themselves from the creepy cloppers amongst them. Lewis Skellett, a computing student at Edinburgh and Edinburgh Napier University, called cloppers “bad seeds”.

He admitted “I have read a lot of fan fictions” but because he considers himself asexual, “the sexual content doesn’t bother me”.

David Bowden says the clopper stuff is “definitely not my thing. I’d prefer if it wasn’t there, partly because it’s giving so many others a bad name.” 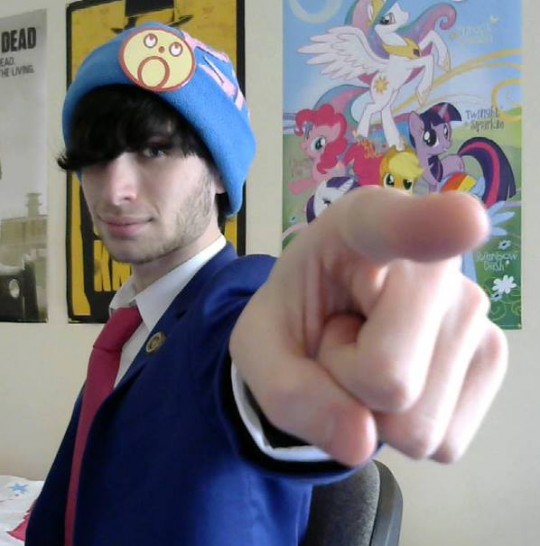 Whilst bronies might seem odd to many, their influence is not to be discounted. Just today Hasbro announced a huge jump in quarterly profits of £82.5million based mostly on sales of the iconic My Little Pony toys.

Bronies: not quite rugby lads or drama geeks but still a student community in their own right. Just maybe a little bit weirder.

*Some names have been changed