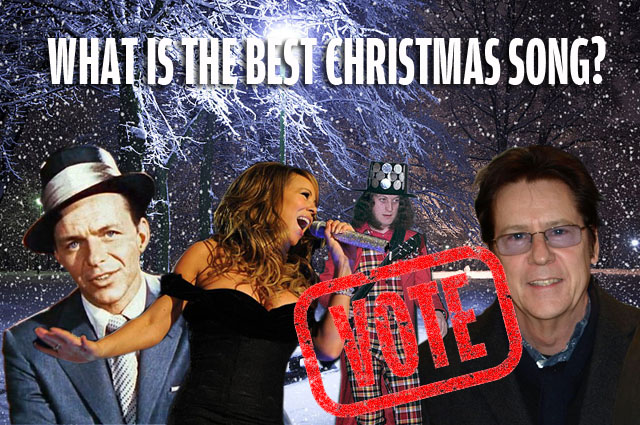 Vote: what is the ultimate Christmas song?

In the distant dawn age before Simon Cowell started shoehorning his shite into the Crimbo chants, there actually used to be some festive bangers. But which is the best? (Now with no Michael Bublé!)

Mariah Carey – All I Want for Christmas is You

Despite Richard Curtis and Justin Bieber‘s best respective efforts to stop her, Mariah kicks and screams its way onto our shortlist like we just started juggling her puppies (I mean the Jack Russells).

George Michael would have to have 29 hearts to have given one ‘to someone special’ every Christmas since 1984.

The Lil’ Wayne of his day, Nat King Cole smoked three packs of menthol cigs a day in order to maintain his trademark sound.

In 2013 so far, Noddy Holder’s gang have earned over half a million quid off the back of this glam rock classic – enough to buy each of the unemployed people in his home town of Wolverhampton this wicker chest of drawers. It’s Chriiiiiiiiiiiistmaaaaaaaaaas!

Here’s another classic from back when the Geldofs were more keen on feeding the hungry of Africa than leaking the names of paedophiles on Twitter.

“Shaky” apparently is working on a new album due for release next year. Why not put on this cracker to soundtrack your suspense?

Between beatings and before he went all white and dead, MJ churned out this cover with his bros.

A must-play for anyone lashing through the snow this December is this track from the Rat Pack’s legendary boozehound.

‘”White Christmas” was written for the 1942 film Holiday Inn, in which Bing scrubs lonely businessmen’s semen out of wash-basins for 140 minutes (probably).

Bewildering rubber man-puppet Cliff has apparently made 98 grand off this four-minute creepfest this year alone. Indulge yourself below.

Shambolic, rousing and doused in Jameson, this is the song your dad boozily shouts in your face as you carry him back from the pub after Midnight Mass.

Frank Sinatra – Have Yourself a Merry Little Christmas

Back in the 60s, the FBI thought Ol’ Blue Eyes might be a communist. Make sure you buffer this vid before you watch it to stop it from Stalin.

Cheeky Scouser McCartney heartlessly sang about ‘simply having a wonderful Christmas-time’ as his home city’s docks sloped into decline and put thousands out of work.

Wizzard – I Wish It Could Be Christmas Everyday

Unavoidable at Christmas is this glam rock stomper from Roy Wood’s crew, in which he dons a hat from lost property and resembles a White Walker from Game of Thrones.

In true Christmas spirit, Kurtis Blow now trains ministers at Nyack College and founded the Hip Hop Church. A vote for Big K is a vote for the little baby Jeebus.