Harry Hodges has had enough of names with an apos’trophe, too many Bitstrips and bragging about a night on the sofa.

Don’t use unnecessary detail in your name

First name, surname, end of. The amount of extra information in somebody’s name directly correlates with how much of a twat they are. Middle names are unnecessary. Declaring yourself “Junior” or “The 3rd” is akin to tattooing “I’m a wanker” on your forehead. There is a special corner of hell reserved for people who include banterous nicknames and the sooner they get there the better.

Deleting the vowels is totally nccptbl. Randomly including apostrophes to bamboozle headhunters just makes you look a pretenti’ous wan’ker. Inventing a new name for yourself so some Deloitte grunt can’t find you is cowardly (yes, “Alex Unsearchable”, “Jonathon Hidden” and “Max Enigma”, I’m looking at you). Adjust your privacy settings, it’s not hard.

Don’t make your cover photo a picture of you

You already get your name and a picture of your face, if you dominate the cover photo too then you either have no mates at all (and deservedly so) or you’re an egomaniac incapable of sharing your one tiny slot of the internet with anybody else. Avoid twatception and find something worth celebrating that isn’t yourself.

Not a picture of your dog who nobody gives a fuck about. Not a picture of some obscure philosopher in a desperate bid to appear zany/whimsical/a member of the liberal intelligentsia. Not an advert for some play that nobody will watch anyway. Not a graphic advertising your blog about football teams you’ve never seen. Not a Bitstrip of yourself. Never a Bitstrip of yourself. 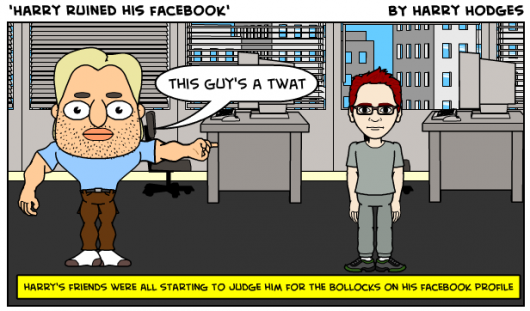 Don’t brag about having a shit time

A glass of wine, a tub of Ben & Jerry’s and a Hugh Grant film is not a cool way to spend your Friday night even if you are “Having a lazy one because my footsies are sore”. Statistically most of the people in the world (probably) had a shit day, yours isn’t special. Slowly turning into Bridget Jones should be a cry for help not a cause for celebration.

Don’t brag about anything at all 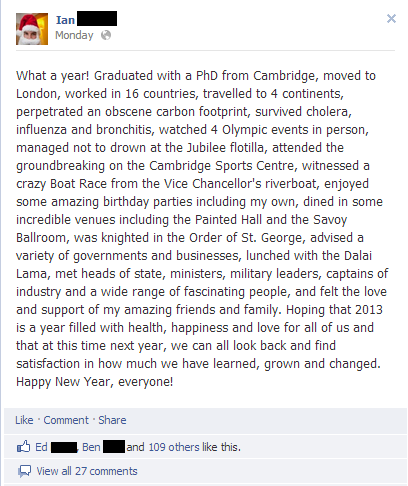 Well done mate, you did all that and yet the take home message of your status is that you’re an uber-prick. Your New Year’s Resolution should be to delete your Facebook, retreat to the furthest of those four continents you’re ever so humble about having visited and never contact any of us ever again.

“Oh my God, can’t wait to see my perfect boy later xoxox so perfect xoxox” accompanied by obligatory awkward selfie twenty minutes later in which at least one of you desperately doesn’t want to be there. In three months they’ll have cheated on you with somebody who’s less of a gimp and given you an STD to boot.

Don’t use too many vowels

Too many letters in a word conveys idiocy not excitement, it makes whatever you’re writing come out like “YYYYYYYYAAAAYYYYYYYY I GOOOTTT ALLL THE E’S I WANTED IN MY GCSES WOOOOOOOOOOOOOOOOOOOOOP”. Often accompanied by excessive use of emojis, #hashtags and punctuation!!!

Nobody cares what you think about Nelson Mandela. Even worse were the smug-faced mediacrats instantly declaring “Wow, can’t wait to see my Facebook feed full of people paying tribute to Mandela”. Pre-empting them with your droll criticism of the social media zeitgeist is as tragic as it is derivative. You’re all cliches and tired ones at that. 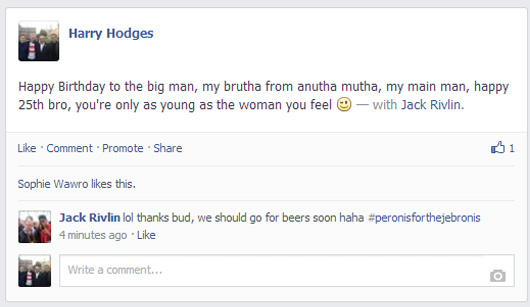 The whole phenomenon of the Happy Birthday message is achingly cringe-worthy. Is the highlight of anybody’s birthday really seeing a primary school friend who nobody’s seen for 10 years writing “HB xx” on their wall? The status, clearly designed to put the poster a level above these lesser-friends, is a desperate plea for Bestie status. Keep your sucking up offline.