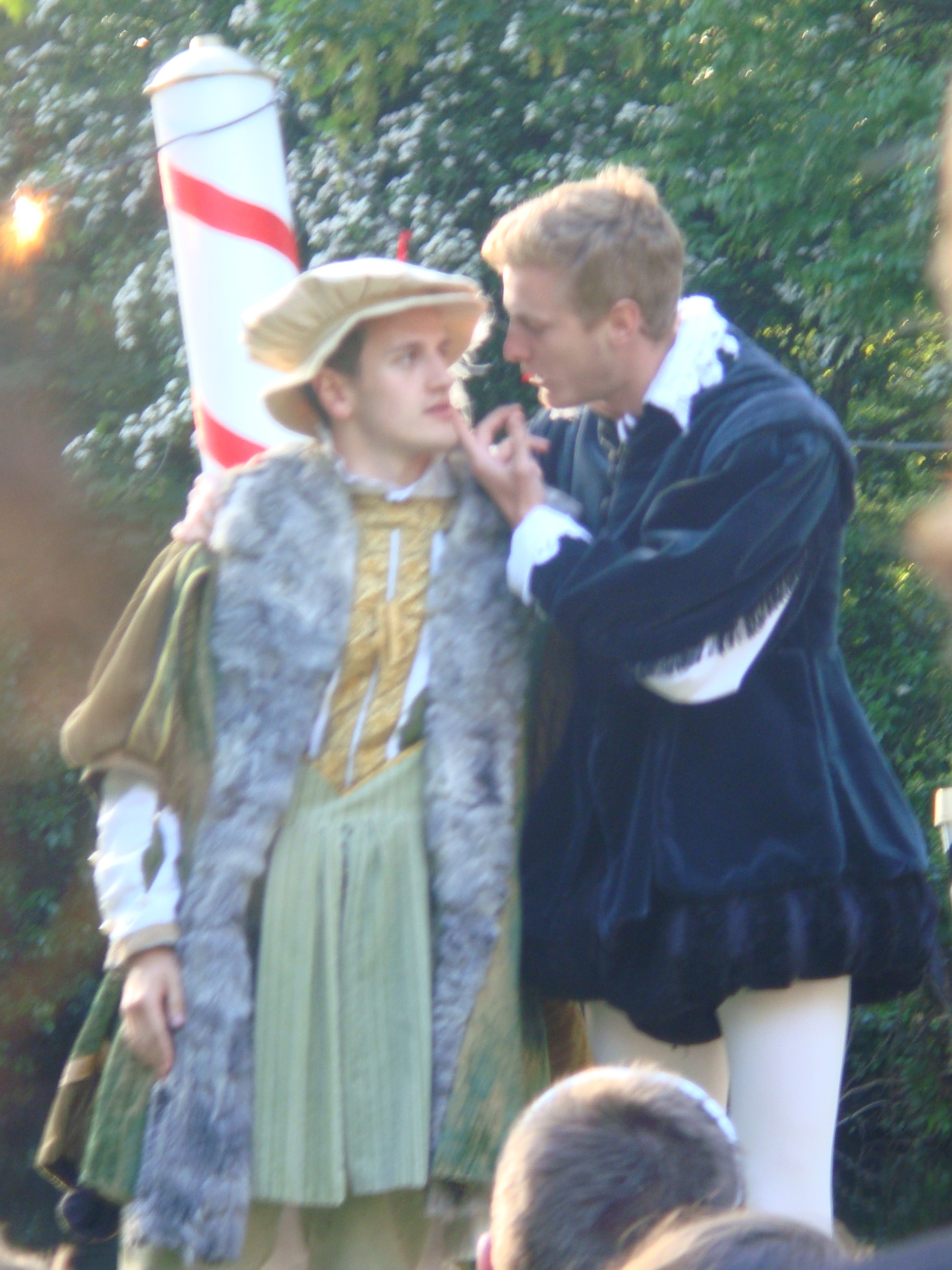 Shakespeare remake on the lake

They came over the Worcester lawns in droves, bearing blankets and picnic baskets, settling down with chardonnay and crackers for an evening of dark comedy: insidious racism, flesh-hungry misers and feisty females.

The audience of The Buskin’s Merchant of Venice (aka Shakespeare on the lake, aka the hottest tickets this Trinity) were richly rewarded for their frostbitten fingers.

Surrounded by the noises of nature, wind in the trees and the setting sun, a Venetian pontoon – complete with red and white columns – floated at the edge of the lake.

The production, a lively and faithful al fresco remastering of Shakespeare’s lengthy play, succeeded in captivating the audience with both sumptuous costumes and compelling performances for the entire two and a half hour duration. 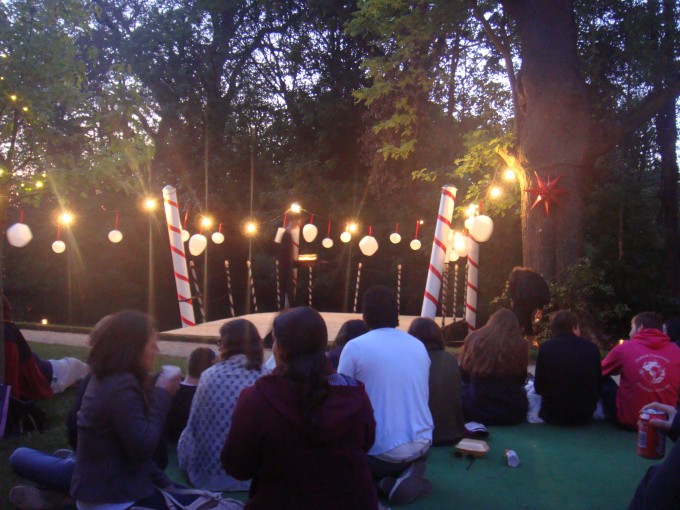 Merchant proved extremely professional in execution, strong from the confident acting and effective staging to the seamless transition between scenes.

Standout performances were claimed by the minor characters: Nick de Mulder’s Prince of Morocco – turbaned, swaddled and draped with meters of material – injected real character in a fabulously egotistical pastiche with an even more fabulous accent.

Lancelot, a charismatic Cockney played by the effervescent Jack Sain, gave a fantastically limber and dynamic performance as a dramatic foil, providing much-needed comic relief. Throwing himself – quite literally – into his role, Sain brought energy to the staler dialogic scenes. 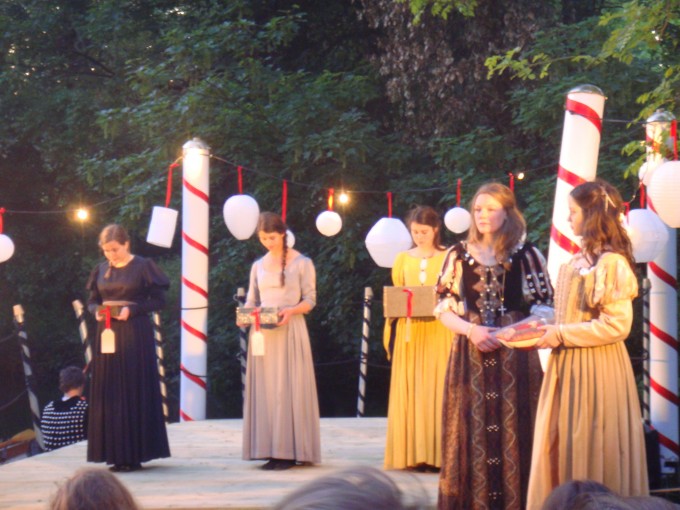 The play’s unusual interpretation of Shylock’s role saw him as a caustic and aggressive equal to his Venetian tormentors- far from the aged victim as he is usually portrayed. 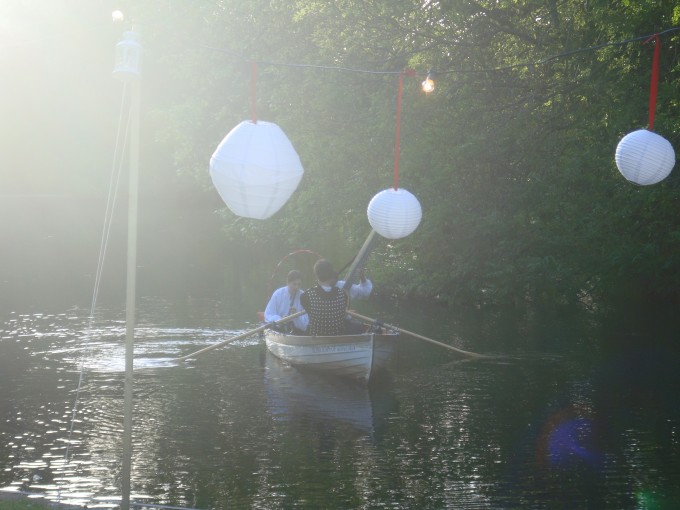 Naturally, Merchant’s setting had its restraints – voices strained to be heard against background noise and the wandering mandolin player was sadly drowned out against the sound of the wind.

The seating was poorly thought through, with members of the audience jostling for a clear view onto the action, further obscured by the extra layers bundled on as the evening drew on. 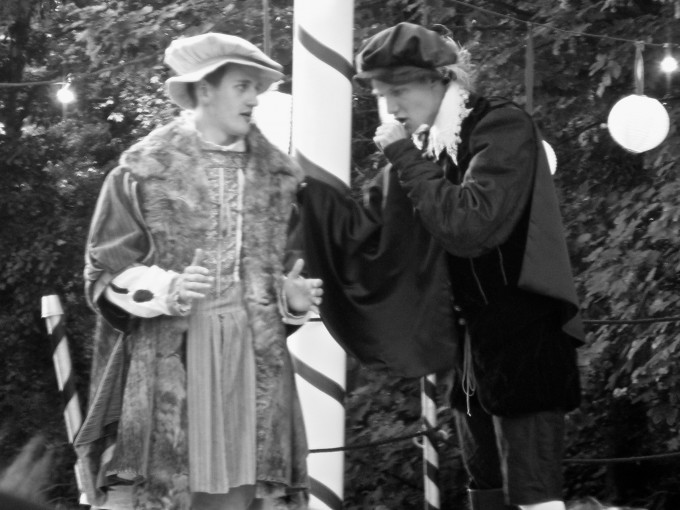 Other occupational hazards proved more comic- ducks stole the stage by wandering through some of the more solemn scenes. However, the brilliant direction of Lucinda Dawkins exploited the setting to its full potential, including a stunning fairy-lit boat ride through the dark. 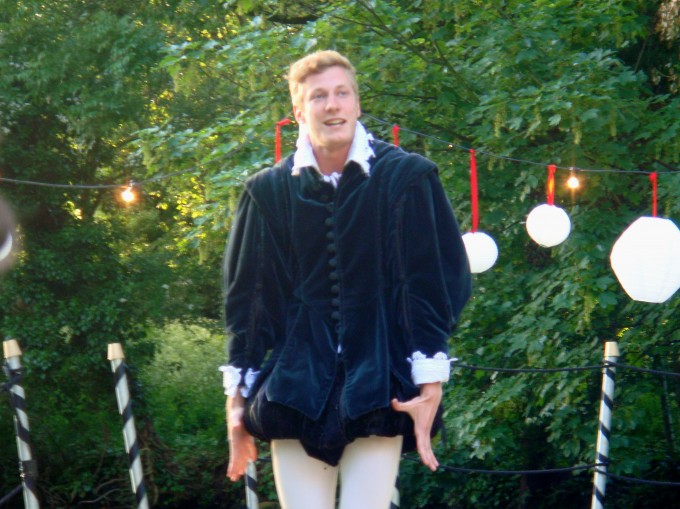 The overall experience was incredibly atmospheric – the sun set, paper lanterns swayed, and at the interval, flickering candles were lit.

The lake sat dark against the brightly lit performers, creating a beautiful naturalistic chiaroscuro that spot-lit the action onstage. Performing in the open air elevated an already marvellous and proficient adaption of Shakespeare into an unmissable experience. And they even broke into dance…