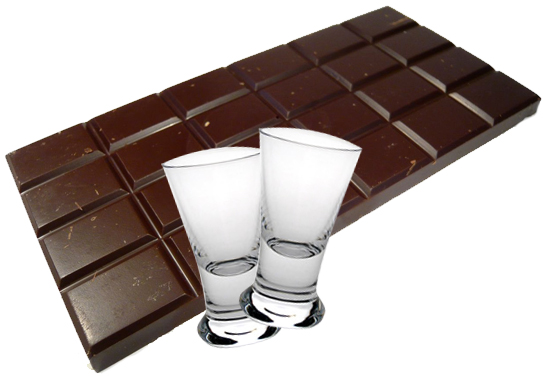 Healthy chocolate that makes you drunk

Scientists have found a way to reduce the fat in chocolate… and replace it with alcohol!

Scientists have found a way to halve the amount of fat in chocolate without changing the way it feels in your mouth.

And as if that wasn’t good news enough, the boffins say they could use alcohol to replace the lost fat, potentially creating vodka chocolate bars.

The team from Warwick University are working on a method that replaces fat with the gelling agent agar. The agar effectively creates tiny sponges that displace the fat in chocolate.

Typically, reduced fat chocolate does not have the same texture as the full-fat variety. However, this new method is said to produce chocolate that feels as velvety-smooth as the traditional stuff.

Brilliantly, scientists say water, fruit juice or even alcohol can be used to replace the fat. When alcohol is used, Dr Stefan Bon said the chocolates were like “tiny vodka jellies”.

The team first mixed fruit juices with chocolate. Dr Bon said: “That was exciting because it had the combination of fruit juice and chocolate, and everybody went wild on it.

“Then some people – especially in the UK – said: ‘but can we do alcohol?’

“We’ve been working very hard in the lab to make a system that can do that – we then thought we could make tiny little vodka jellies.

“So you can stick to your fruit juice if you want, but you can also make a vodka-based chocolate bar, which is exciting – obviously not very healthy, but exciting.”