‘It was a death threat. I don’t understand how anyone misconstrues ‘destroy her.”

Tori Coan first became aware of Mark Daniel Neuhoff's stance as a white supremacist in late August after seeing several of his anti-Semitic posts on Facebook. One post professed the English department graduate teaching assistant's personal belief in white supremacy. Another tied him to Vanguard America, a group that has been connected to the recent attacks in Charlottesville. A more complete archive of the posts in question can be seen here, although we must warn readers that their contents feature deeply disturbing viewpoints. 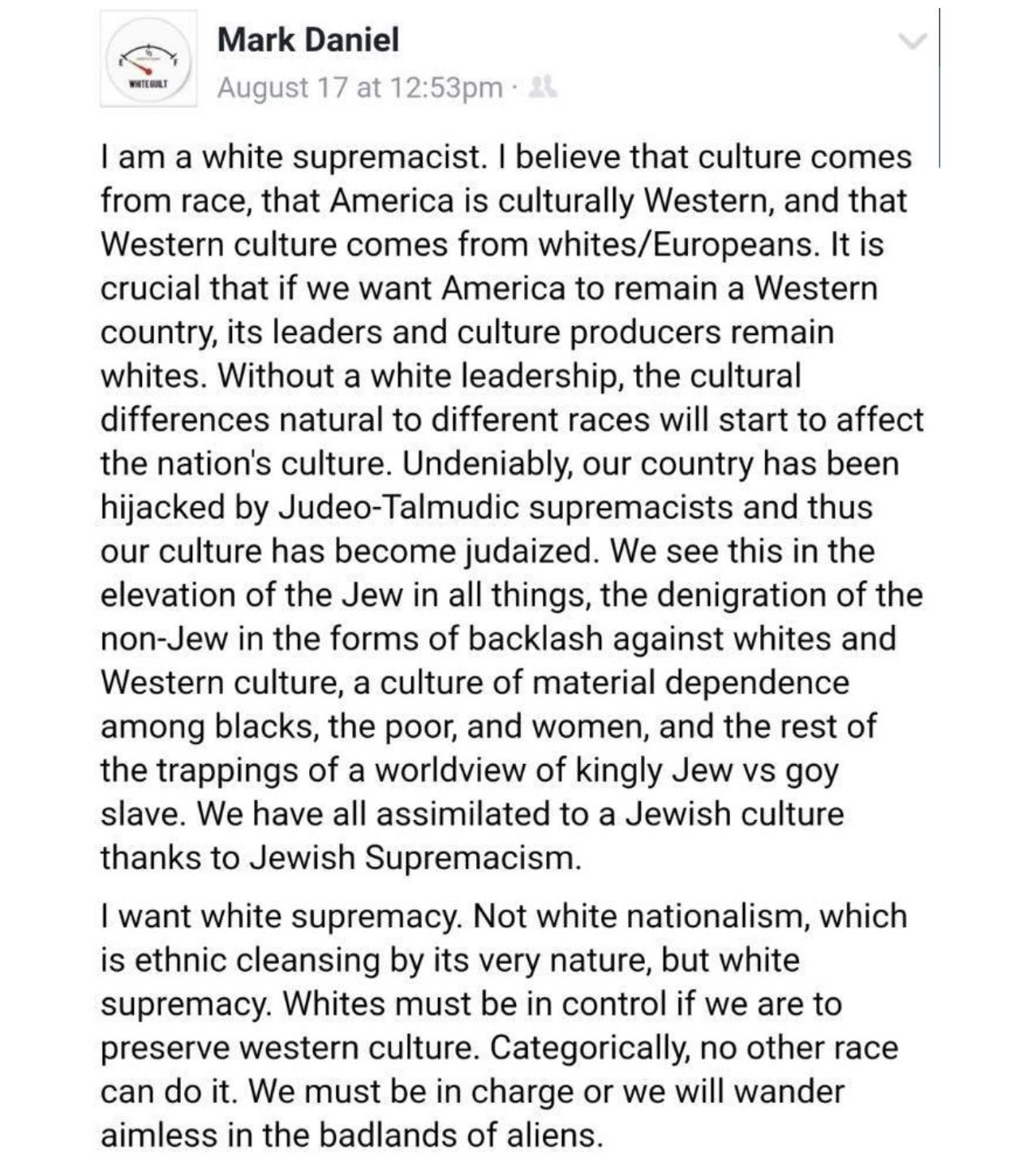 Concerned for the well-being of her fellow students, Tori shared the information to a club page that she had been involved with in the past, urging people to stay safe on campus and promising to look into the issue further.

Tori has as been heavily involved in the protests and allegedly received a death threat from Neuhoff after the demonstration at President Sands' State of the University Address.

We sat down with Tori to discuss the effect the threat has had on her and on the Virginia Tech community as a whole.

What happened after you shared the information you found?

"Mark and his wife became aware of that post, and that is when I was informed that Mark shared my Facebook page to his. He had my profile picture and my name on it, and he said, 'This girl is harassing me and trying to get me fired,' which was scary.

"A lot of folks have asked, 'Well it wasn't an actual physical threat so what about it was so scary?' It was scary because Mark is a self-professed white supremacist with ties to Vanguard America who has multiple white supremacist friends on Facebook and other networks. We've seen in the past year that those on the alt-right have been emboldened and those that profess to be Nazis or neo-Nazis. We know that they are willing to use violence in the name of their beliefs. So my name was out there as someone in opposition to Mark and that left me open to harassment. At any time, anyone could see that post and decide I should be a target as a result."

Were you able to do anything to protect yourself?

"I took that to the administration. I originally wasn't going to, but I wanted it on record because I was afraid that things might escalate. I was afraid if I continued to speak out on the issue, which was something I planned to do, that something worse would happen."

According to Tori, the administration was concerned but explained to her that they were unable to take action because no physical threat was made. Tori spent the following months meeting with various administrators at the university, including the Division of Student Affairs, Equity and Accessibility, Student Conduct, a number of individuals from the Cultural and Community Centers, Diversity Inclusion, and Cook Counseling.

Every response was the same; their hands were tied because Neuhoff's blatant racism was still seen as a free speech issue. Finding no support from the university, Tori and other concerned students organized a protest at President Sands' State of the University address.

There was an anti Nazi, KKK, and fascist protest that interrupted President Sand's State of the University Address.

Can you tell us a little more about the protest?

"At the end of September, we demonstrated at President Sands' State of the University Address. We disrupted, and I gave an interview to the Roanoke Times, going on record because I think this is something that needs to be told. President Sands told us that this was not the time or the place and that sometimes our Principles of Community are in conflict with free speech and not enforceable."

Do you think the school should act on the Principles of Community as something more than just principles?

"I think that if principles are not enforceable then why have them? What is the point of having principles if we don't actually abide by them?"

Especially principles such as "treat each other equally?"

"Exactly. Especially ones that profess things that are already written in law—that you can't discriminate based on race, gender, sexuality, et cetera. The argument has been made that Mark hasn't discriminated against anyone, but how can you claim that you aren't discriminating against people you view as inherently inferior? This is the point I want to stress. You cannot teach people that you believe to be subhuman. Some of his posts talk about how he does not believe that black people are capable of learning. How can you teach minority students—how can you teach Jewish students when you believe that 'one million might be a tad too many dead Jews but that's splitting hairs?'" 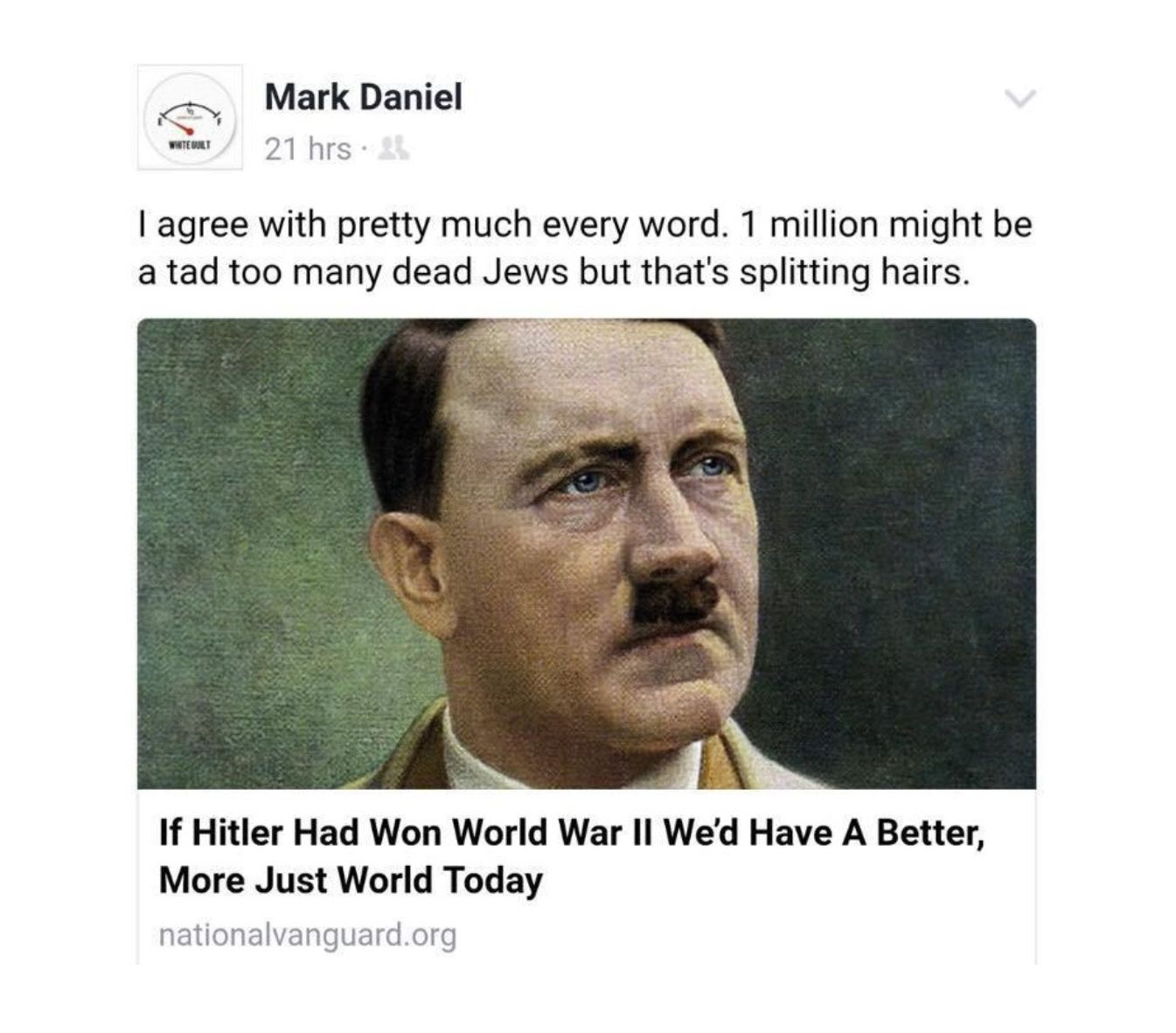 Post from Neuhoff's page that Tori references in the quote above.

After the protest, the harassment escalated when a woman claiming to be Mark's wife attempted to contact Tori via Facebook multiple times. The woman also sent emails to the executive board of the club page that Tori shared Neuhoff's posts to, accusing them of lying, calling Tori a coward, and threatening consequences if Tori did not stop speaking out. Despite the pressure, Tori did not respond.

"I was not interested in talking to her. I did not want to sit down with someone who espoused these views. I do not believe in giving platforms to white supremacy. After the protest I was made aware that she had emailed the club executive board again, hurling insults, but it was much more aggressive than before."

What was the emotional impact of that for you?

"I've just been living with a cloud of fear. I walk around campus unsure if Mark knows my class schedule, if he and his wife are planning to harm me, if somebody who saw Mark's post is going to go rogue and try to physically hurt me. While I do not feel like Mark Neuhoff is stalking me around campus, it is just a constant fear that something could happen to me or to other students who have been involved.

"If we want to talk about free speech, we should talk about the fact that [all I have done is] used my voice to speak out against views that I don't believe in. It's concerning to me that this has become about me censoring Mark's free speech but nobody is talking about how my right to free speech has been challenged.

"It has been difficult. Meeting with admin on a regular basis disrupts my schedule. It prevents me from doing schoolwork. It's something that I think about in class because it's hard to block out this visceral, emotional issue. It's difficult to keep up with all of these moving parts."

The Monday after the protest, Tori was on the bus home from class when she received a call from the woman identifying herself as Mark's wife. She then proceeded to yell expletives at Tori, calling her a bitch and a coward and claiming that she would have to "protect her family" if Tori didn't stop. Tori immediately hung up the phone. She then received twelve to fifteen texts from the woman before alsoreceiving calls from numbers she did not know, all sending the same message as the first call. Tori was left in confusion for half an hour before finally discovering that someone had doxxed her.

"About 30 minutes later, I was made aware that Mark posted on his Facebook page, 'my wife found the bitch's number.' It listed my cell phone number. Then it said, 'Fuck her up. Destroy her,' with a link to the Roanoke Times article, pointing me out in the picture. It was terrifying. It's still hard to talk about. I started receiving incessant phone calls from blocked numbers. My phone was essentially useless because every time I ignored a call, another one was already coming through. I mean, I must have received 70 calls at minimum that night alone. Honestly, probably more. It was deeply unsettling. It was a death threat. I don't understand how anyone misconstrues 'destroy her.'

"In the comment section of the Facebook post, Mark is encouraging his friends who said that they would go after me. It is the scariest thing that has ever happened to me in my entire life. I was also made aware that night that my number had been posted on an online sex chat website by someone impersonating me and telling people to call me for a good time. I started receiving sexually explicit text messages and phone calls."

What did you do next?

"I went to the Virginia Tech Police Department. They told me there was nothing they could do. I was in the wrong location and had to go to the Blacksburg Police. I went to the Blacksburg Police Department, spent two hours being questioned and was sent home with little recompense. Since then VTPD and BPD have been investigating. They have a warrant for Mark's Facebook page and are investigating the post as a death threat. The only solace I have in this situation is that I'm not being harassed the way I was that first week, but you can't undo the fact that my number is out there or that there's been a call to violence against me. Nothing can undo that. I missed an entire week of classes and couldn't come on campus."

What was the final straw that made you decide to step back, step out of the classes, and disrupt your schedule to keep yourself safe?

"The death threat. I couldn't go on campus knowing Mark was on campus, knowing that he had posted on Facebook about buying a gun to protect his family, knowing that his wife had said she was going to defend her family. There was no way for me to exist on campus."

Do you feel that the university's lack of involvement has compromised safety on campus instead of fostering a free speech environment?

"I think that while this threat was directed at me, it could have been directed at anyone on campus that disagrees with Mark. I think that this campus cannot be safe while someone who has issued a death threat is allowed to teach.

"When I got involved in this issue back in August, I was afraid that something like this would happen and I tried to express that fear. I asked that we take a proactive approach so that we would not be in the situation we are in now. I cannot imagine sitting here in a month having to talk to you about another last straw."

"I continue to organize around this and use my voice to disavow white supremacy in all forms and in all places. Now the Virginia Tech community is aware. I guess we wait and see what the university finds and then go from there. But right now, the safety of students needs to be paramount." 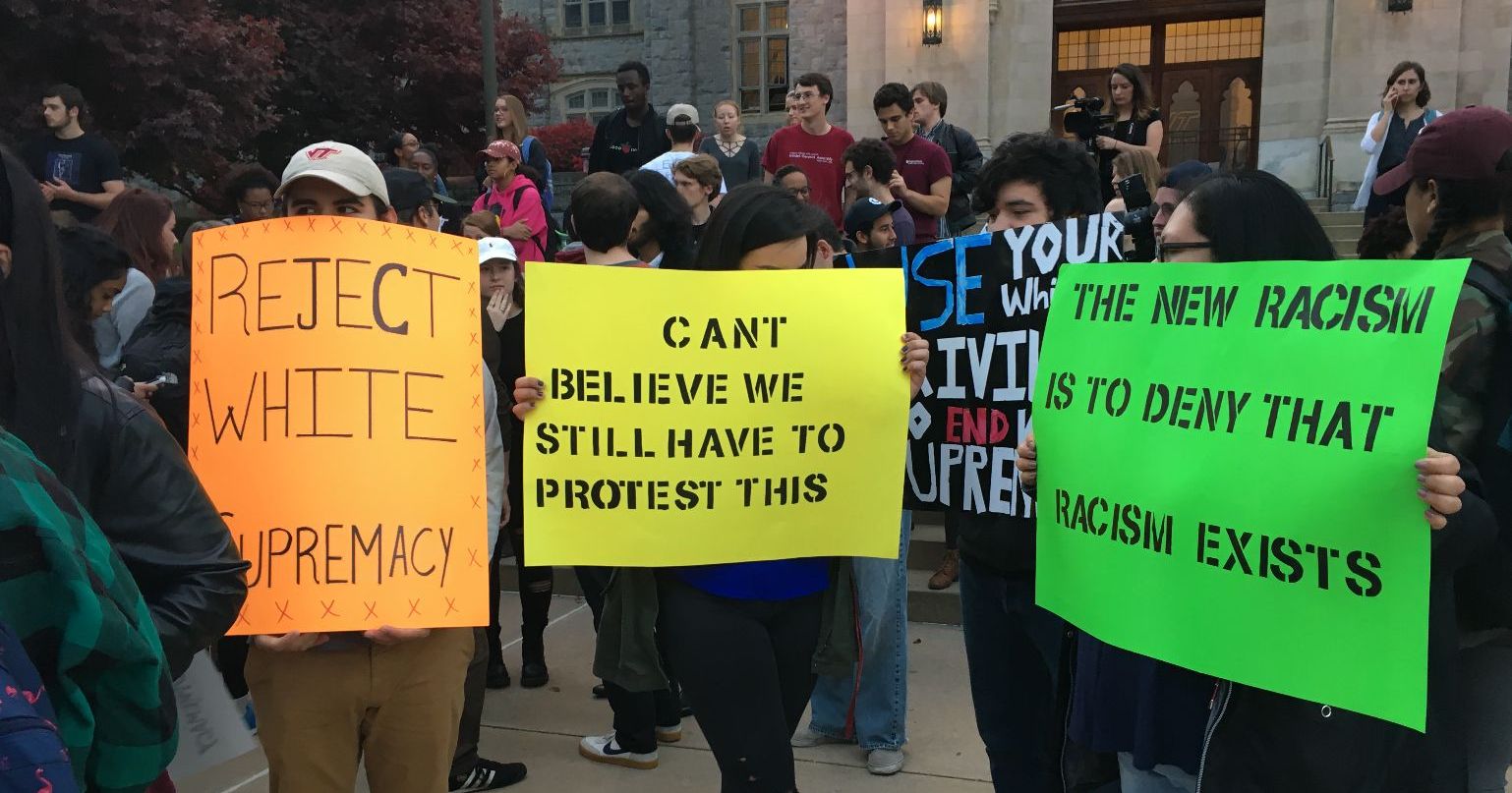 Since The Tab's interview with Tori, more protests were organized on campus, and after last week's march it appears that our student body was able to do what our administration refused to. Neuhoff has announced he will not be returning to his position as a GTA due to the overwhelming number of calls for his dismissal.

Police have concluded their investigation into the death threat, finding Neuhoff "not responsible." The university confirmed someone else posted the threat to his profile, saying "Evidence gathered suggests that the October 2nd, 2017 Facebook post on Neuhoff's Facebook page was not actually made by Mark Neuhoff."