Her status now has over 1000 likes

Second Year and Boylan Heights waitress Alex Connell posted this Facebook status where she bashed three visiting students who dine and dashed while she was serving them. The story went on to gain over 1,000 likes and an insane amount of attention. 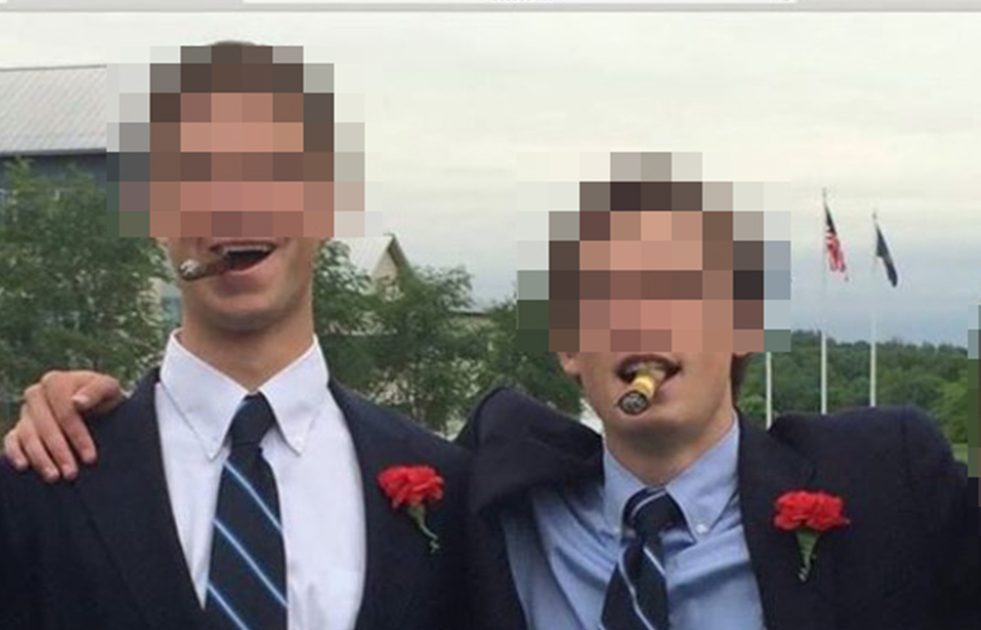 After her altercation with the three guys and her public call-out getting huge attention, we caught up with Alex to get the full story. We found out that of the three, one is in greek life at GW and one is at an elite prep school in Pennsylvania where tuition costs thousands of dollars a year. The boys have been approached for comment. 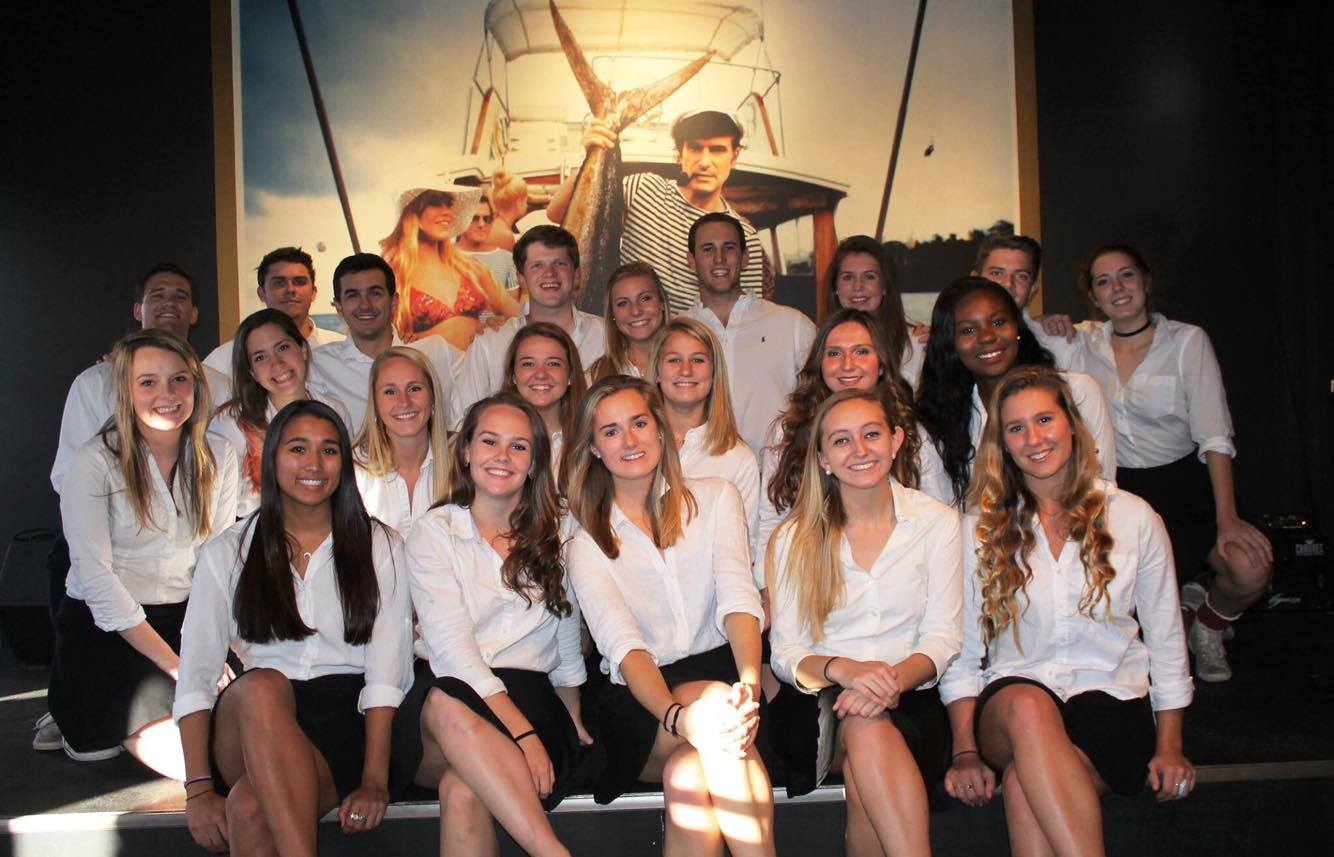 Alex with the Boylan Heights staff

This is what she had to say:

“I worked a double at Boylan, so the whole day is a bit of a blur. It was before 3pm in the AM part of my shift, they all came in and sat at a big round table by the door.

“They asked about our after-school specials and gameday wings and I was like ‘there’s three of you so you can get both.”

“It’s funny because I didn’t remember it but when I saw them again I was remembered how nice I was to them, I was like ‘what the heck.'”

“Because it’s busy on Saturdays, you try and close out your tables as quickly as possible so I asked them if they wanted another round of drinks or if they wanted to close out and they asked what the bill was.

“So I go, check my other tables, you know just do my job and then I come back and they’re gone.

“I was like, did they go upstairs, did they get anyone to close out their check, like where’d they go? They just left and it sucks because there’s just so many ways they could’ve resolved it.

“Anyway, the rest of the day was awful, I’ve lost my voice from Saturday because I was at work for so long and had to be up early.”

“I saw them that night at a house party and they looked liked deer in the headlights. After a lot of conversation and talking to one of them who said he used to be a bus boy who told me he asked them to stay. But it’s like dude, if you were a busboy, you should’ve punched them in the gut when they said they wanted to leave.”

But how have things been since it all blew up?

“Their host from UVA has started messaging me and trying to get me to take down my status. 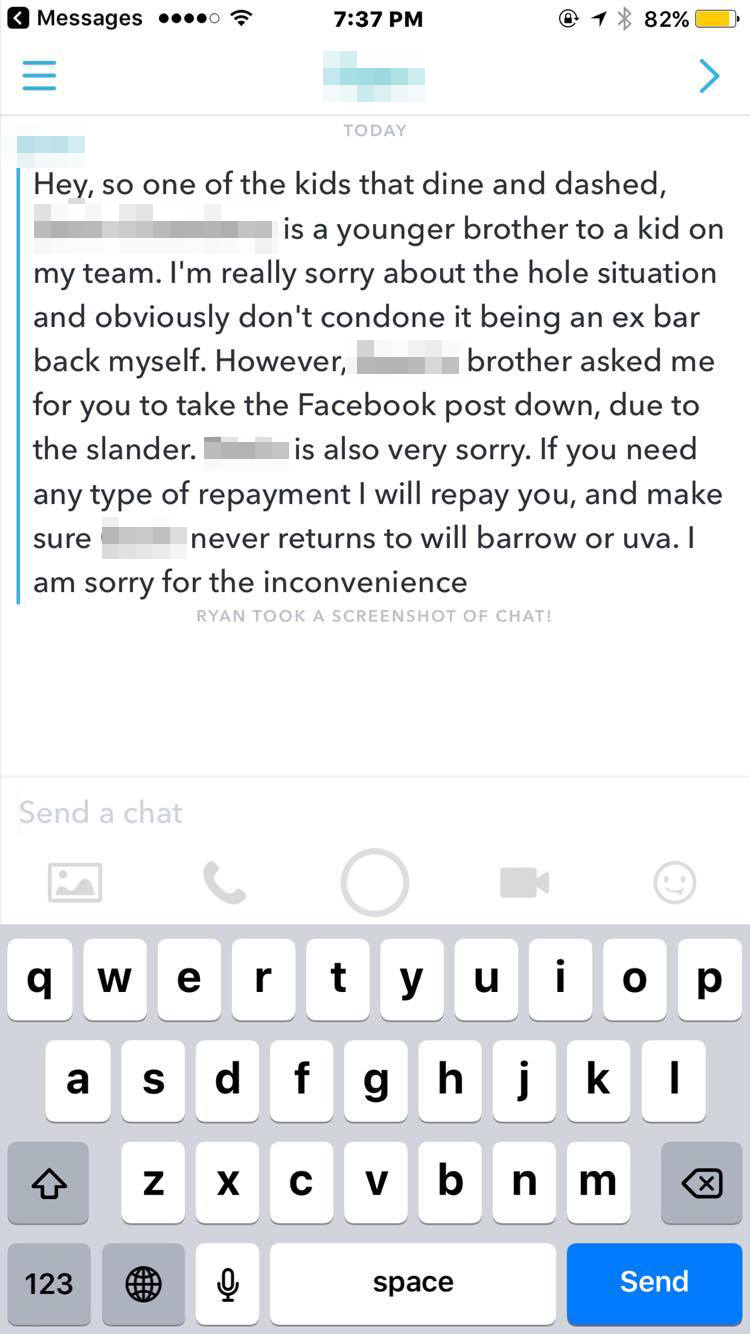 “Some of their other friends tried to stick up for them on my post, saying ‘allegedly.’ I could pull up the CCTV or press charges, but this doesn’t need to go any further.

“My English teacher from high school took a screenshot of my Facebook and sent it to the athletic director of the prep school where the younger ones play lacrosse. 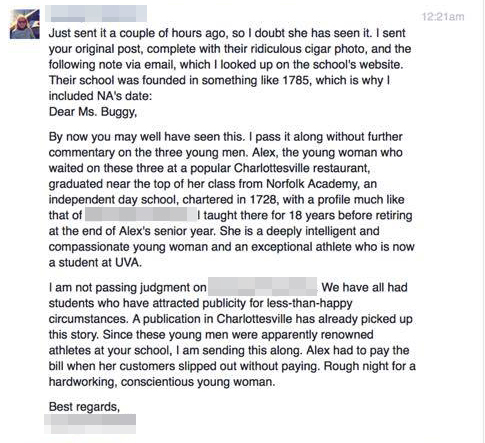 “Dining and dashing is just the shittiest thing you can do, because if you think you’re broke, don’t go to a restaurant where you can’t pay and put  me, the girl working for $2.13 an hour that gets taxed on tips, in this shitty position.

There are plenty of ways to resolve it, we even do a pay on your honor thing if you forget your money. They could’ve Venmoed me on the spot and I could’ve covered it”

“It was clear they were drinking all day, but being drunk isn’t an excuse.”