Dozens of protesters and Horowitz talked directly to The Tab USC

Writer David Horowitz’s speech to USC College Republicans, entitled “Stop the Jew Hatred,” was met with both a Daily Trojan opinion piece calling for his banning form campus, as well as dozens of protesters openly opposing the talk.

The speech, coordinated by the club’s president Jacob Ellenhorn, who is currently facing impeachment charges from his role as USG Commuter Senator for his controversial speakers for the independent club, was flanked by security guards and DPS patrol. 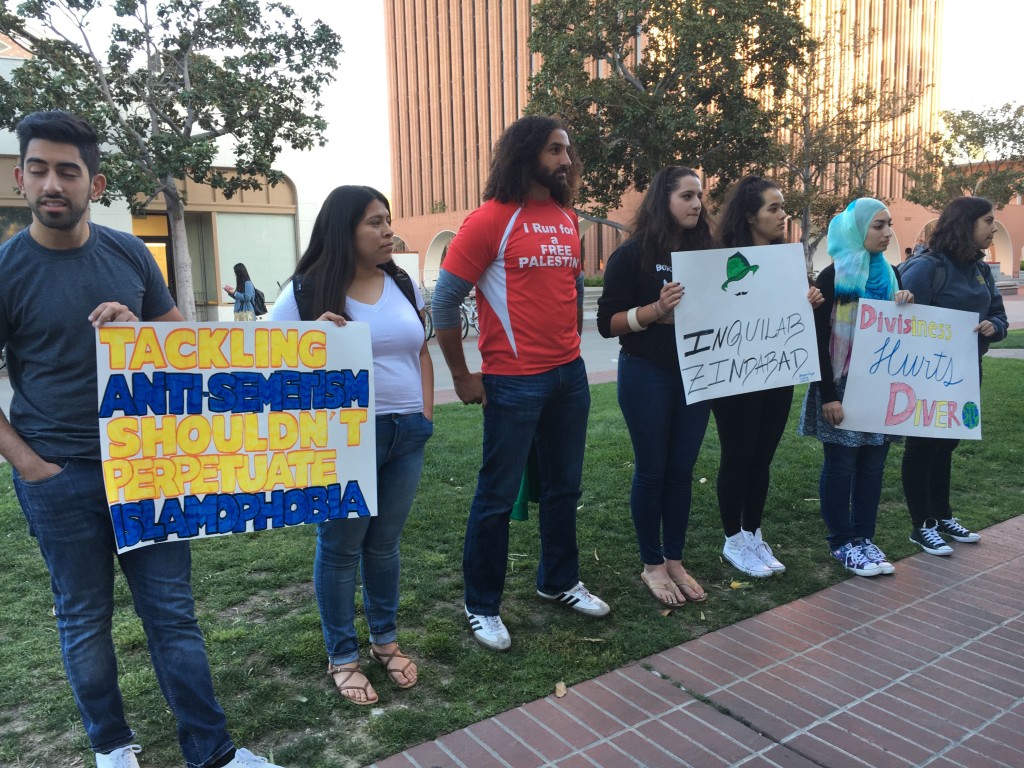 Protester on Trousdale outside of the Taper Hall of Humanities

The protest organizer, freshman Broadcast Journalism major Muhammad Yusuf Tarr, said: “For the second time, College Republicans have invited David Horowitz to come speak on our campus. David Horowitz is a man who has built his career on Islamophobia. He has said some very, very offensive things to African-Americans, and by having him on campus, we’re legitimizing his hate speech.

“He has his First Amendment right to be here, we all do, but when you’re going to contribute to a negative campus climate, then we’re going to take issue with that.”

The protesters, who said that they were not officially affiliated with any organization, originally stood on the side of Trousdale Parkway closest to the Taper Hall of Humanities, the site of Horowitz’s speech. When DPS police asked that they move to the other side of Trousdale to abide by the designated protest area, they peacefully complied, and informed them that they would be attending the event. The only provisions placed on the protesters by DPS was that they could not bring posters inside, as that would disrupt from Horowitz’s speech.

One protester voiced opposition to not just the event, but USC’s stance on Israeli-Palestinian relations as a whole. Kiren Singh, deeming herself a humanitarian activist, said: “USC’s President Nikias has posted two statements in the past ten years about how he thinks BDS goes against the principles of USC, and I think that in itself is a form of silencing a discussion around what it stands for and why so many organizations are in support of it.”

The writer of the aforementioned Daily Trojan piece calling for Horowitz’s ban from campus, Lida Dianti, was also in the line of protest. Dianti, a junior majoring in International Relations, expressed a more pointed purpose in protesting the event, stating: “It’s not about having various voices, that’s not the problem. His entire event is centered around why anti-Semitic actions on campus are dangerous and hurting people. The problem is that his way of mitigating that is attacking other people, and we think that attacking others in any space at all is dangerous and it’s hurtful for discourse.”

Dianti, who along with the Daily Trojan is being served with libel charges by Horowitz, asserted: “We’re talking about how can we actually solve problems and bring people together, and his version of doing that is harmful actually. We’re just opposed to this event that’s happening right now.

“We’re not trying to counter the narrative; we oppose the speaker. We’re not against people having events; we’re against bringing inflammatory rhetoric on our campus.” 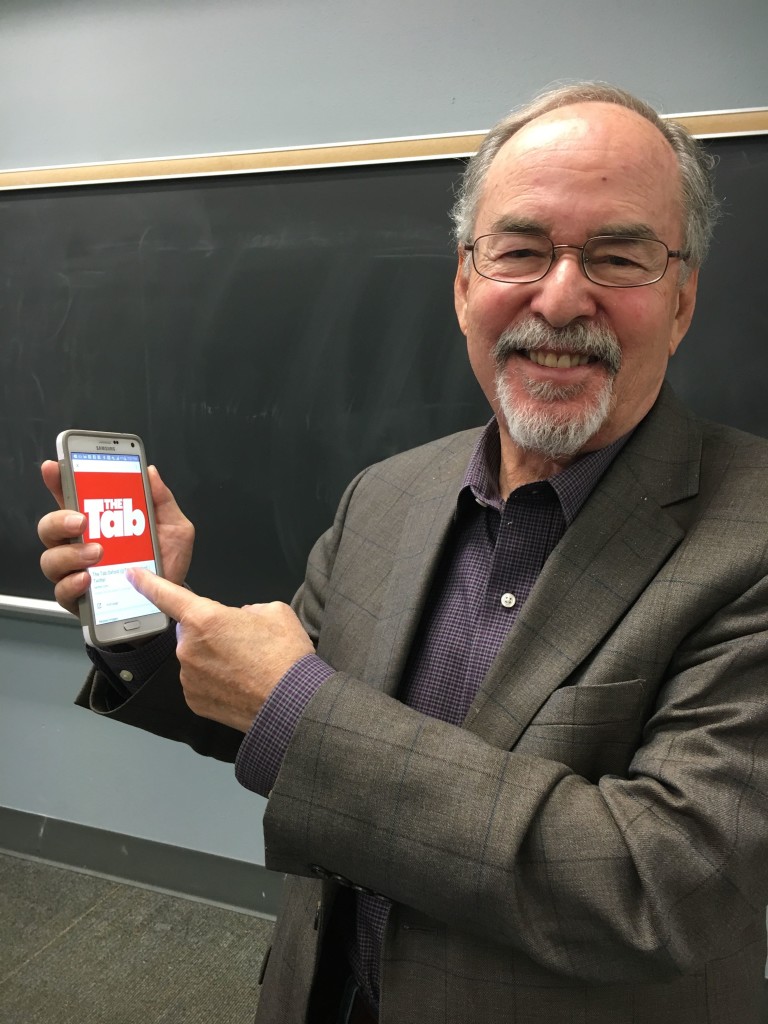 Horowitz after his interview with The Tab USC

Horowitz spoke exclusively to The Tab USC before his speech to address Dianti’s article.

“Everything that she wrote about me is a lie. She’s getting a lawyer’s letter for libel and so are the editors of the Daily Trojan and the Vice President of Student Affairs. She quotes a notorious and discredited smear site, the Southern Poverty Law Center,” Horowitz said.

“I have written over a million and a half words that are all published. There are maybe 30 or 50 hours of me talking, either lecturing on campuses or on CSPAN. She clearly didn’t read anything I wrote and just took everything off that smear site.”

Horowitz further attested to his background to call out her claims.

“I marched in my first Civil Rights demonstration supporting the Fair Employment Practices Commission, which was Truman’s integration of the civil service, in 1948. I have black grandchildren.”

In what was evidently Horowitz’s signature style, he combined most defenses of himself with the furthering of his controversial arguments, stating: “Anybody who’s read my work knows that I’ve written extensively on how racist the Democratic Party is. It controls every inner city of every size in America and is responsible for all the race-based poverty inside of them. If Republicans ran Baltimore, Philadelphia, Chicago, Ferguson, guess how they’d be?” 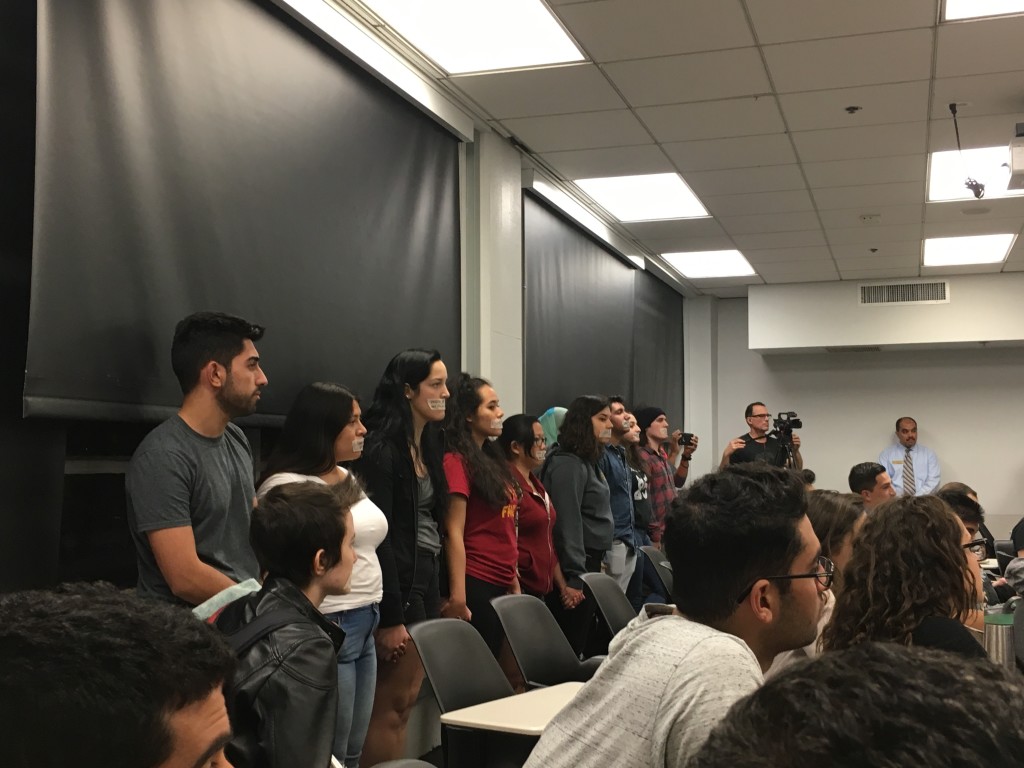 The protesters stood in the back of the room politely, abiding by DPS’s ruling to forbid posters

During the speech, which Dianti and her fellow protesters attending, sans signs but with tape covering their mouths while all holding hands, Horowitz directly to Dianti, not mincing words or holding back, calling her a liar and openly stating his intentions to pursue legal action.

While tensions were high, the protesters did not disrupt Horowitz’s speech, in which he presented his case in radical defense of Israel.

Horowitz summarized his argument to The Tab as the following: “Anyone who’s anti-Zionism is a Jew hater, even if they’re Jewish. If there was one black country in the entire world, and the National Liberation movement or the Nationalist movement that created that black country was attacked, what do you think all these Leftists would call the people who attacked them?”

During his speech, Horowitz not only discussed his ideas regarding the validity of Palestinian sovereignty — which is non-existent, he asserts, because the Romans violently expelled the Jews from the region 3000 years ago — but also recent trends suppressing intellectual diversity.

Directly addressing the protesters in the back of the room, Horowitz said: “The people who want to silence me have taped their mouths . . . Free speech is useless if you’re doing it in a prison cell. I don’t know if you read about Communism anymore, but that’s what the Soviets did. The agenda is to make you an unperson.”

Contrary to other protesters, USC was fortunate enough to maintain a respectful atmostphere devoid of the brutality and panic that other universities have seen when faced with controversial figures. After all, Ben Shapiro came to USC in November without any demonstration, only to be faced with uncivilized chaos and a police detail under four months later at California State University, Los Angeles. The protesters voiced their opinions, like Horowitz, and neither resorted to force to shut the other one down.

However, Horowitz warned that the seeds have been planted for something much more sinister: “Yes, they’re laughable, but it won’t be laughable at USC when they harass dissenters like Jacob. These aren’t ‘snowflakes.’ These are fascists. The only difference between a fascist and a communist is the same difference between a Sunni jihadist and a Shia jihadist: they hate each other, but they have the same agenda. The agenda is to destroy individual freedom.”