The Tab UCLA asked UCLA graduate and Native American Sebdar (part of the Tongva tribe) about the importance of Indigenous People's Day, the celebration UCLA held, and how we can better improve the way Indigenous Peoples are represented.

For those who may not know, why is it significant or important that Columbus Day was replaced with Indigenous Peoples Day?

[Replacing Columbus Day with Indigenous Peoples Day] was a two step process. One to abolish Columbus Day, because what does it celebrate there? It's Genocide Commemoration Day. The fact that all the things that we're taught he did, he didn't even do. He made it to the Caribbean, which was an Indian post for trading already and there were a lot of people there-he wasn't the first to arrive or anything-and how he treated the Taino Indians whom he met with by saying, 'These are the nicest people I've ever met, they're so sweet, it's going to be so easy to enslave them.' He comes over from Europe and he has this mentality. I don't think he was on his way to India, I think he was on his way to enslave a place or to create an outpost to extract resources for Europe, and he did that. So that's what we're going to honor? The mentality of American Imperialism, fight the Spanish, and go make a colony out of the Philippines? I mean, this is what we inherited. And who got displaced in all of this? The largest genocide in the world, according to RT, is this ongoing Native American genocide. So that whites killed, or Europeans killed these people, and no one says anything about it.

Interestingly, Los Angeles started as a city around the mission of San Gabriel. The first time city council met, the first order of business was putting a price on Native American heads. Five cents. People would bring barrels, like one of those wheelbarrows, and collect heads and get five cents. That was the first thing. This is not a fantasy, this is the reality that can be looked up…Until you can read Roxanne Dunbar Ortiz's An Indigenous History of the United States do you even get a taste of any of this because it's all been whitewashed by well meaning people who read things that other whites wrote.

We need to honor who was really here and stop honoring some maniac that was genocidal. It wasn't just that somebody came and accidentally gave people diseases, and made a capitalist outpost. I mean that he came to enslave, to rape, and to denigrate, and to utterly destroy. To me it seems worse that he wanted to enslave people because all the people died from not cooperating with the enslavement process. 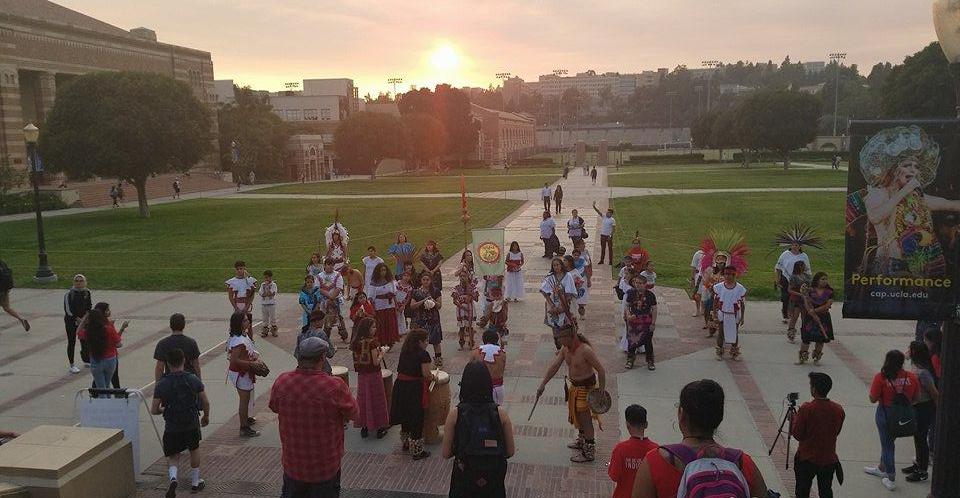 What is something that you would want non-Indigenous peoples to know about Indigenous Peoples today?

Well, one Roxanne Dunbar Ortiz and another woman Whitticar wrote another book saying All the Indians Died, that's the title, because there are twenty things that people believe and they think that there are no more Native Americans, and there are. Almost pure-blooded.

This was Mexico, this was Upper California, and at that time, probably the…indigenous language of Mexico, all those people are still here. All those bloodlines. Ever white person has 1/20th Cherokee or something, so it's all seeped in, and people will act like it's invisible. If you look around, if you look at those people [those performing outside], they don't look Native American, right? Some of them just pass for white, so people think 'it's not here, it's not a problem, no one remembers, this is a history we weren't taught, why resurrect the dead?' It's like, you need some truth and reconciliation and I think until people realize that it's not just like a joke or another group that kind of blended in-I mean, they were wiped out, and they didn't successfully wipe them out, so there's a chance to have it back, have some fairness.

What if you just honored the treaties starting from now? Even that's too much to ask. Some fairness. 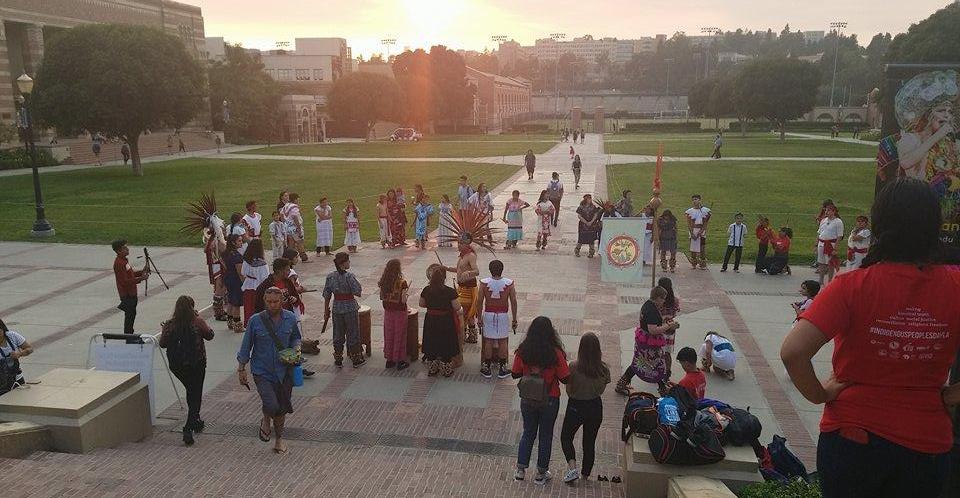 How has this particular event here at UCLA gone and how can we improve it?

I think it's amazing, Chrissie Castro was sending out things about all of us going down to the city council, and I had been there for the Occupy Movement, and I didn't know, 'Oh, here's City Council, decisions, actually get made in this building.' You just think it's like a landmark. For it to end up here, I thought 'Well, this is going to be a bunch of students elevating it,' but it was like the concentrated, sort of like launch party. So it was really amazing to have the Native Studies Department involved, to have the Fowler involed.

You now, I used to fantasize that we could go back, throw the people who came off the land and go back to the old ways. Well that's not going to happen, we're embedded here. Will people rise and be respected as that? Or sort of, 'We'll do your history for you,' so it's like bringing the Indigenous back into it.

And I'm not sure how the day is spelled. Because I thought it was 'People's,' which would mean it was the Tongva people (my people), the Chumash or the Tatavian, or the Acjachemen of Orange County, that these were the people being honored. But Chrissie Castro is Navajo I think she said, and so then it might be [Peoples'], multiple peoples, because there were 100 million people here when Columbus arrived or when he touched land, when other Europeans arrived. It wasn't like an empty space, how they say of Israel, it was teeming with people, many first nations. People need to honor that and if this day brings that and raises that consciousness, there really is a history. White scholars are even bringing out that history so that people can be aware of it. You know, we're so bombarded with it that we're bored of everything, people might pay attention even if they only do it one day a year at the beginning.

In honor of Indigenous People's Day.
Op-Ed by Steven W. Hackel, a professor of history at UC Riverside.https://t.co/TxBSbbZ0pc pic.twitter.com/HeeeEPUOmV

How can we in the United States and here specifically at UCLA improve upon how we treat and represent Indigenous People?

One of the things that never occurred to me, I didn't come here [to UCLA] as a student who had any privileges for being Native American because the Tongva of this land-not really the Tongva, sometimes we call ourselves the Kich or Gabrelinos-are not a recognized tribe. No federal recognition and there's no roster, and therefore you didn't get credit for being Native American. The Native Americans from here to survive had to head south and when they come back, they had suddenly been brown-washed. 'Oh, you're Latino.' And so it just all gets blended in, and all the Latinos get blended in and it's all cool. And it wasn't that way.

So if UCLA builds this department-it's a very small department, and actually-and actually attracts scholarship, it's shocking to me that Cal State Long Beach or Cal State Northridge would have bigger programs or more significant programs. LA-this is the second greatest public school in the world behind Berkeley-to spearhead the movement, there has to be an academic sort of spearhead because society will do one thing, but what happens in academics, I think as long as it lasts, there will be an awakening conscience. Maybe nobody on campus will pay attention as students, right, we're all just walking around, but that people will read about this, know about this, every year they'll see 'Wow, it started at UCLA, that's where the first celebration was.' This isn't a national holiday, right? All the other states are still having Columbus Day. There was one smaller place that has Indigenous People's Day. I mean, it's a growing movement. Long Beach will get it. But we need to elevate consciousness a lot more than that.

So this was the first celebration at UCLA?

Yes. I think it happened about two months ago, and then when they said we were going to have the first one here at UCLA, I thought there were going to be hundreds of [events] and this was just the one I got invited to, but this is the first one, the big launch. All the significant people who made it happen, Mitchell Farrell, Chrissie Castro, and others were here. I thought, 'Wow, I didn't know they were all coming!'

There's a Gabrelino Indians [website], and they're a tribe of 200 who claim to be related to Toypurina, a person that everybody should know. She was a medicine woman in the San Gabriel mission who fought like Joan of Ark against the Spaniards, or tried to. And they didn't succeed, but they were trying to overthrow the land. They [Gabrelinos] feel that they're connected to that person and so all the little Tongva groups-we're Gabbies from Pasadena, that's my group-and everybody is not together. Everybody has their own affiliations and everybody has out-married and has become involved in other holidays and things, so there's no general consciousness. And I know so many people who don't have any Native American background who are so into it. The Native American spirit is all through this land, it doesn't matter where you're from, and it's not just pretend Brady Bunch style 'put on a thing.' It's like, get in touch with that thing and sort of bring it back. It can't remain hidden."