She took his phone, posted on his Snapstory and sent herself $30

It is a truth universally acknowledged that pledges have it pretty bad. They’re not allowed to partake in all the joys of frat life, having to clean up for the brothers, cook for them and are subjected to harsh challenges at a moment’s notice.

But one UCI freshman pledge had it worse than most after he fell victim to what could be the first reported case of Venmo-jacking.

A pledge just told me that some girl at the venue party took his phone to put her number in and then venmo'd herself 30$. LMFAO IM DEAD.

18-year-old Eric*, an undeclared major from California, fell victim to the $30 theft at a Saturday mixer at his fraternity.

He told The Tab: “We had been planning a venue and invited just a ton of girls and had busses picking everyone up and taking them to the venue. As we are walking to the bus, I recognized a girl I met in orientation.

“We get to talking and she ends up putting her number in my phone, also posting a snap with her friend on my Snapchat story so I’m not even thinking twice about it. And apparently that was when she Venmoed herself $30 from my account.

“But I don’t notice, she just gives me my phone back and says ‘We took a picture on your snap, if that’s okay?’ So the night goes on and next day I see that I’m down $30 from my Venmo and it was sent to the same girl I had recognized in the beginning of that night.” 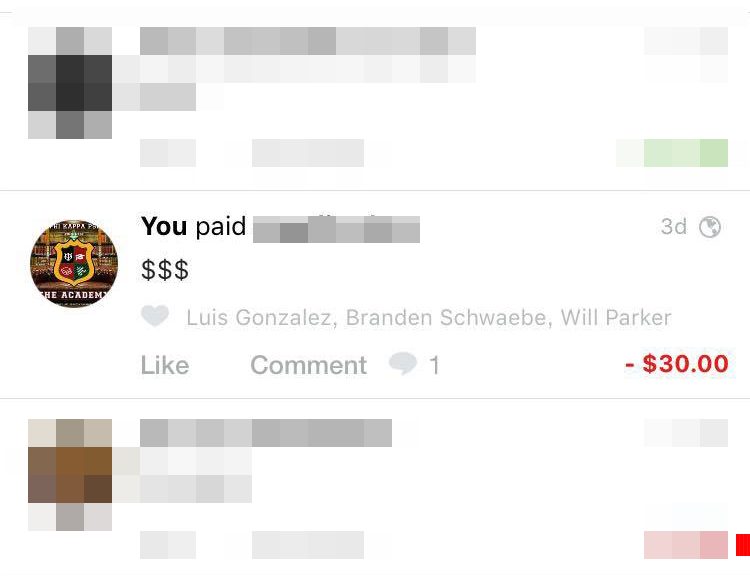 The Venmo charge in question

But that wasn’t the end of the story.

He continued: “I don’t notice until the next morning but I knew who this girl was and what sorority she was affiliated with. I get to talking with my pledge brothers and they are helping me with contacting some other girls from her same sorority and some of the actives in my fraternity were helping out as well.

“So then I finally get a notification on Venmo saying she had paid back the $30 and I also get a text message from her saying she was sorry and how she had no idea how it happened and just had no recollection of any of it.”

As to the future, Eric is not optimistic that this will be the start of a blossoming friendship. He said:”I talked with her face to face yesterday and we hashed it out, no hard feelings or anything.

“I’m still skeptical of her story and just don’t believe it but what can you do, right?”

*Name has been changed