President Eisgruber, who maintained Wednesday that he would not sign the list of demands submitted by the Black Justice League, amended his stance Thursday and offered to take some action on all three demands.

After a full day of conferences, students and faculty signed a revised version of the BJL’s demands in Nassau Hall around 8:30pm. On Friday, over 400 students signed a petition requesting the president reverse his decision, calling the agreement “morally abhorrent and blatantly illegal.”

A list of concessions Eisgruber and his staff made are described below, as well as a list of increased demands made by the BJL.

Concession: According to the Princeton University Press Club, President Eisgruber agreed to make a personal recommendation to the head of Wilson College that the mural in Wilcox dining hall be removed.

He added: “I agree entirely that we should have a far more diverse set of images on this campus. It would be much more meaningful to me, personally.”

Concession: Eisgruber also agreed to inquire with the Board of Trustees about forming a committee to consider changing the name of the Woodrow Wilson School.

He said: “I am confident that the board will put together a process on which to collect views and information on this question.”

Concession: The president also promised to recommend the Woodrow Wilson School display a plaque or note acknowledging Wilson’s racist past.

Demand 2: “WE DEMAND cultural competency training for all staff and faculty.” The letter states that this request was previously voted down on free speech grounds, and requests classes on the history of marginalized peoples be added to the list of distribution requirements.

Concession: Eisgruber agreed to have the Dean of Faculty meet with the BJL to discuss mandatory cultural competency training.

The president added that actually putting  mandatory training into practice would be extremely difficult, as the faculty would have to vote to bring the training upon themselves, and suggested the BJL seek alternate strategies for increasing comfort levels between faculty and minority students.

He said: “The hardest thing that we can do is have the faculty vote on mandatory training for themselves, that’s like asking them to tax themselves.”

Concession: Dean Dolan said the General Education Task Force will discuss adding some form of diversity education to academic distribution requirements at its next meeting on December 8th. BJL members will be invited to speak.

Demand 3: “WE DEMAND a cultural space on campus dedicated specifically to Black students, and that space can be within the Carl A. Fields Center but should be clearly marked.” The BJL stipulated that the naming of the space be left to student discretion so as to avoid naming it after a “white benefactor or person with bigoted beliefs, as evidenced by the naming of Stanhope Hall.”

A list of demands that the BJL added verbally today are included below.

Under the new proposal, students would live in a designated hall or section with other students sharing an interest in Black culture.

Dean Dolan said administration is considering making this change, but that the process would be lengthy.

According to the Princeton University Press Club, a revised draft of the document was printed but negotiations stalled just before signing. A third draft was printed and signed by both students and faculty, including President Eisgruber. The document reads as follows: 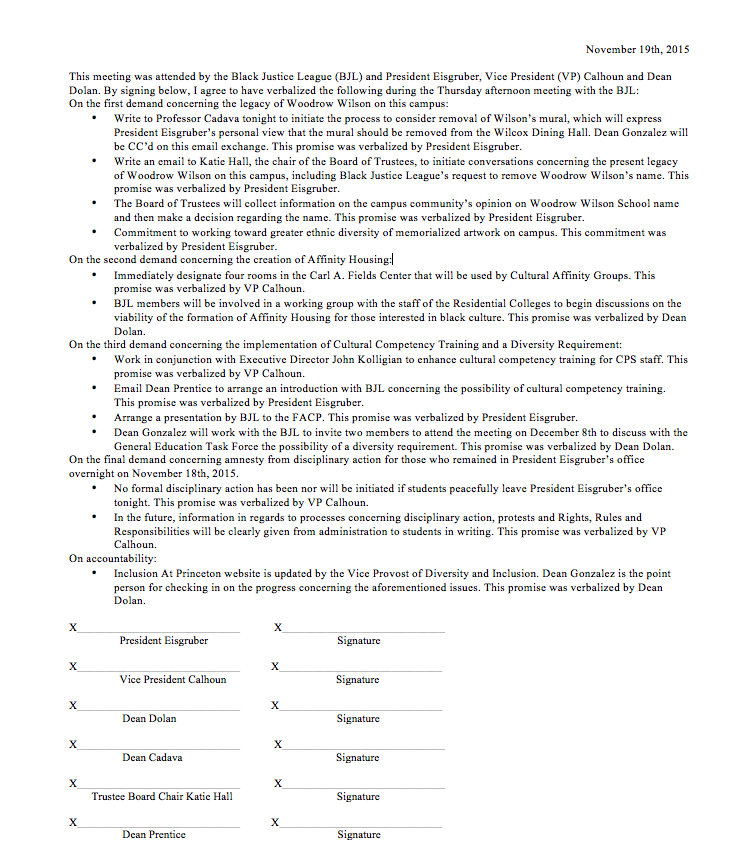