Eisgruber says he will NOT sign, university threatens disciplinary action

On Wednesday the Black Justice League led a walkout from lectures across campus, culminating in a sit-in protest in President Eisgruber’s office. After nearly 36 hours of occupation, the BJL presented a revised list of demands that Eisgruber signed.

Live coverage of Wednesday’s events, including footage of President Eisgruber’s initial speech explaining his refusal to sign the document, is included below.

For details concerning the revised document that the president signed on Thursday, click here.

Timeline of Wednesday’s protests and Eisgruber’s initial response to demands:

7:32 pm Public Safety’s presence inside the building is confirmed. An estimated 20 protesters remain inside and can be seen through the window. The others report planning to sleep on the steps of Nassau Hall or nearby. 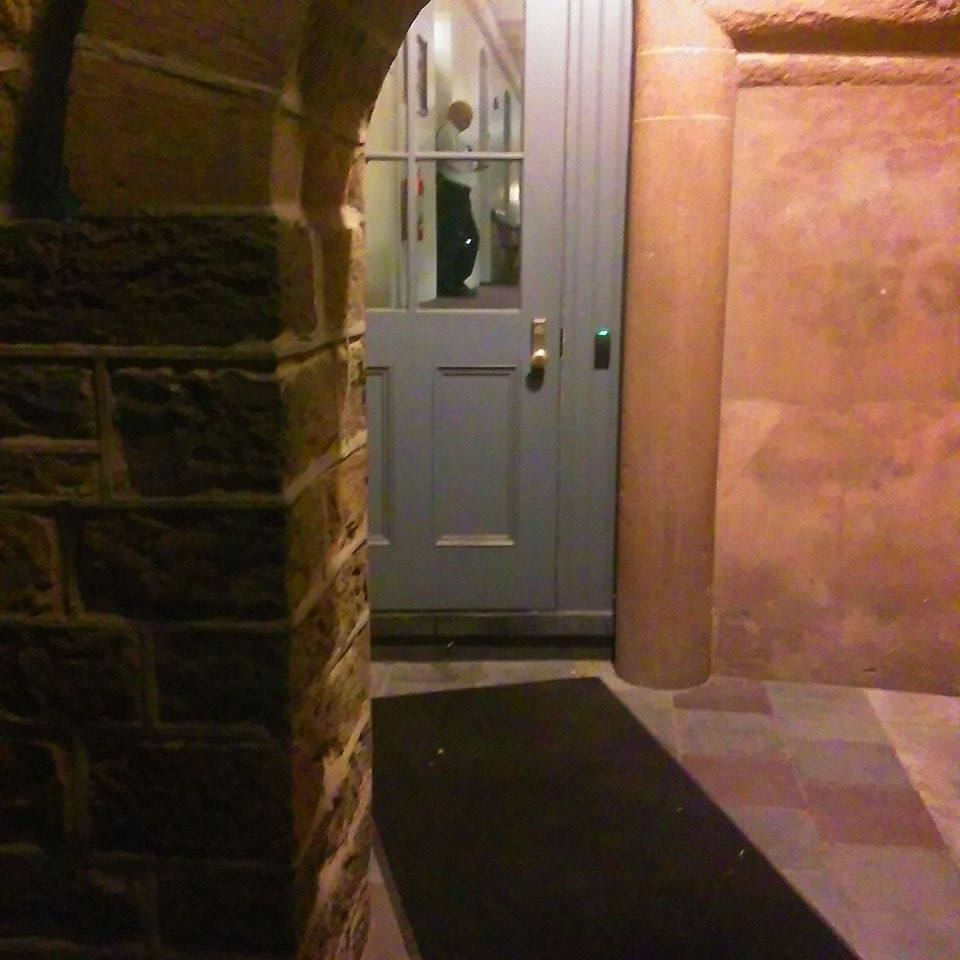 At least two Public Safety officers are spotted inside

7:20 pm “No justice, no peace” chants break out in front of Nassau Hall.

7:10 pm Protester reports receiving threat to the BJL via Facebook: 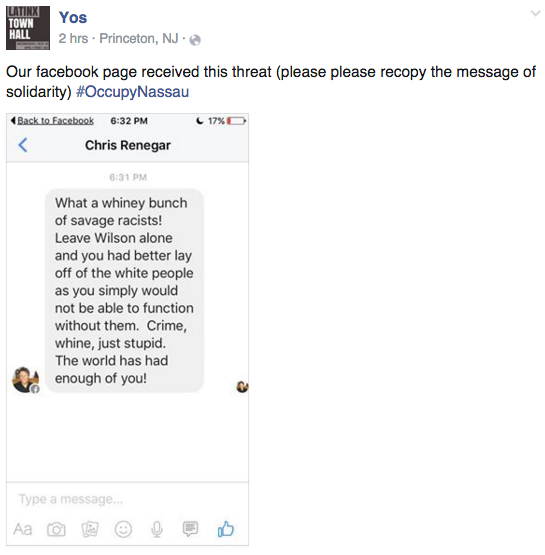 6:56 pm Large crowd has gathered outside Nassau Hall, chants and singing break out led by activists on steps. 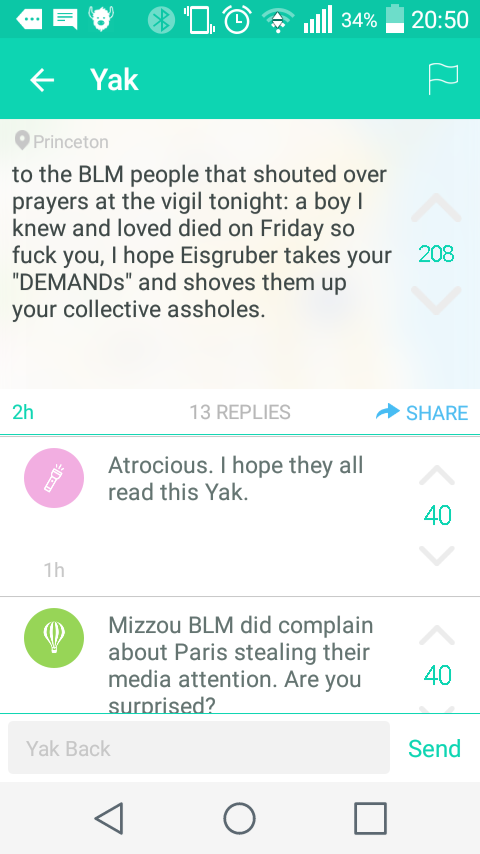 5:17 pm After her statement, Dean Deignan fields additional questions from the protestors and says that were they to occupy the steps in front of Nassau Hall, they would not be in violation:

“I wanted to let you all know that the building is now closing. The President’s suite is closing.

“And I would like to urge you all to gather your personal belongings and please leave the building. If you choose to remain in the building, you will be in violation of university regulations according to Rights, Rules, and Responsibilities, and you may be subject to disciplinary action.

“So, I want to give you all a little time to think about what I just said, it’s just a little bit after five, and I will come back in a short while.”

She adds that Rights, Rules, and Responsibilities designates specific areas on campus for protests and that the President’s office is not one of them.

Protesters asked what the consequences would be if they do choose to violate the rule and remain in the building after hours. She says that Princeton’s Judicial Committee would hold a hearing and make a decision, and that she doesn’t know off the top of her head who serves on that committee.

A video of the Dean’s statement and some of the protestors’ responses can be seen on a student’s Facebook page, which she volunteered for public viewing, here.

5:09 pm Students continue to occupy President Eisgruber’s office, maintaining they will not leave until he signs the Black Justice League’s demands list. To recap, here are some of today’s key statements from both sides:

“I will not sign that because I don’t agree with everything that’s said.”- Eisgruber

“We told you before, we’re not asking you for anything, we’re demanding. So it’s ok if you don’t wanna sign it right now, we’re gonna be here.” – Student

“Some of your faculty are disgustingly racist.” – Student

“I will defend the right of Robbie George and other conservatives on campus to free speech.”- Eisgruber

“I believe in a very robust version of free speech which allows for the expression of offensive viewpoints.”- Eisgruber

“The right way to approach Woodrow Wilson is to acknowledge what is good about him and what is terrible about him.”-Eisgruber

“I don’t understand why his [Wilson’s] name has to be on a building in order for us to acknowledge the great things that he’s done.” – Student

“You have no idea how many meetings we’ve had with people named Dean, and we keep saying the same things…the burden of our blackness is continuously placed upon us. Why is it not enough for you to understand what it’s like to be black on this campus and to change that?” – Student

3:43 pm Students rally for a letter in support of President Eisgruber via Yik Yak:

2:58 The doors to Nassau Hall remain locked.A member of the Black Justice League posted the following Facebook status, indicating that the group will stand by its vow to occupy President Eisgruber’s office until he has signed the demands list: 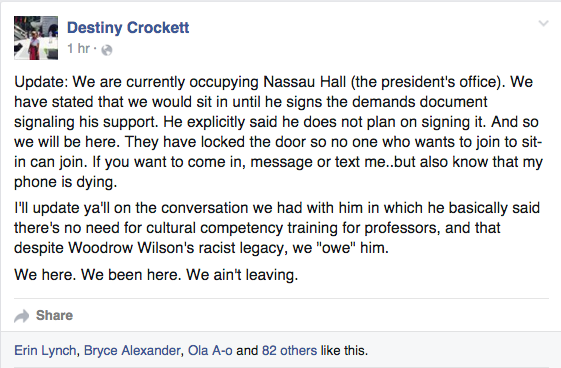 2:48 pm A Princeton student reached out to The Tab Princeton over Facebook, asking: “Is there an op-ed piece on the tab planned for the ridiculous shit going down at Princeton?”

2:38 pm President Eisgruber has left the conference in his office, but protesters have vowed to occupy his office until he signs the Black Justice League’s demands list. The demands include:

1) Renaming the Woodrow Wilson School and Wilson college, while also removing the Wilson mural from Wilcox dining hall
2) Adding cultural competency training for all faculty and staff, to include formalizing classes on marginalized people as part of core curriculum distribution requirements
3) Establishing a space on campus dedicated specifically to Black students

President Eisgruber has agreed in principal to demands two and three, though he adds that he does not have the authority to act on them by himself. He announced that he will not comply with demand one, saying that while he agrees Woodrow Wilson was a racist, he contributed to the schools foundation in many positive ways.

2:11 pm Students continue to voice their support for President Eisgruber via more Yaks. 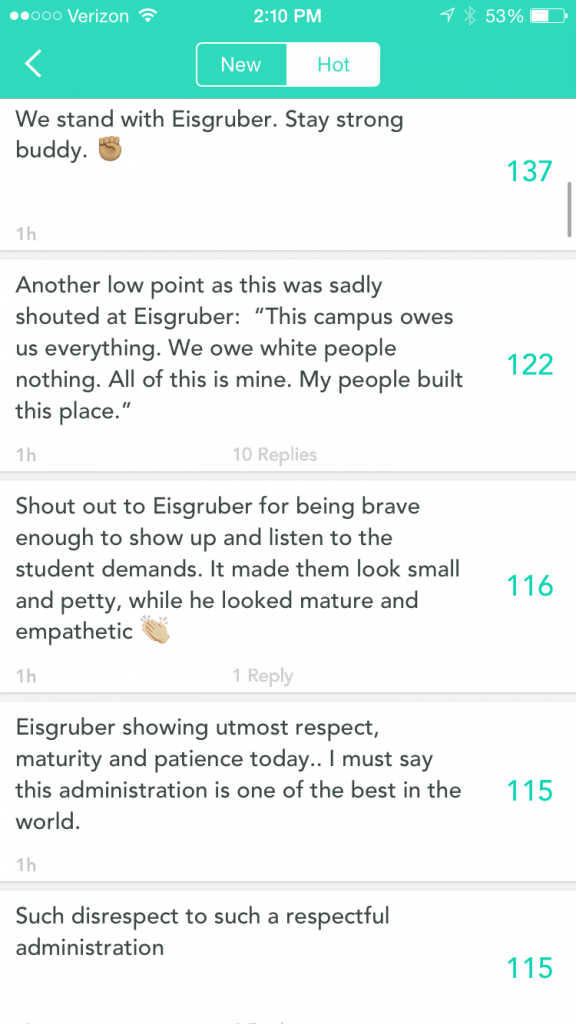 1:30 pm Students voice their support for President Eisgruber on social media. Here are the highest rated Yaks on campus: 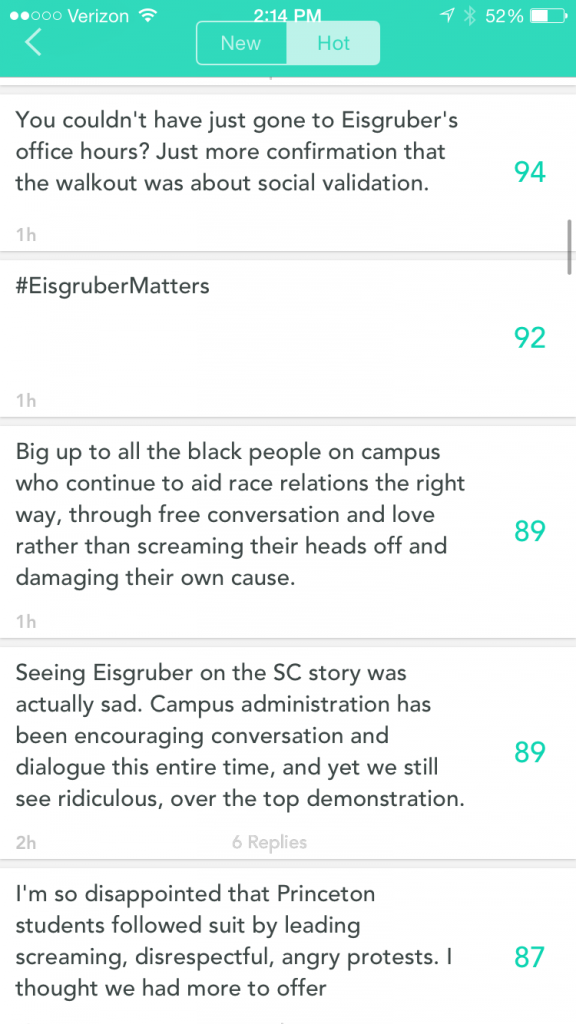 1:01 pm Administrators lock the doors to Nassau Hall. President Eisgruber says the office is at capacity and that no one else can enter.

12:25 pm Dean Dolan joins President Eisgruber and fields questions. She says “I’m very glad you’re here,” and the crowd jeers. She announces that the timetable for change will be “slow,” and that “we have to go through a process…Chris doesn’t have the power to do everything.” 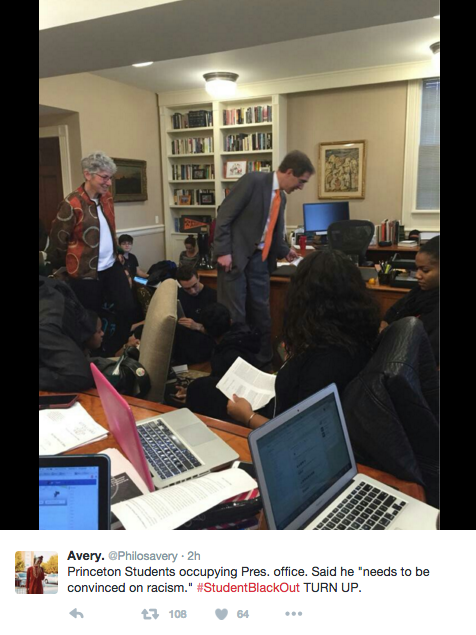 12:22 pm After the announcement, students responded to Eisgruber from the crowd. One said, “[Woodrow Wilson] is a murderer. We owe him nothing. This university owes us everything. I walk around this campus understanding that this was built on the backs of my people and I owe none of you guys anything. We owe white people nothing. If not for the evilness and of white hatred in this country…we would not have to be fighting for our rights.”

She adds, “All of this is mine. My people built this place.”

Another said to Eisgruber, “I don’t want to sit in there in Wilcox Hall and enjoy my meal and look at Woodrow Wilson, who would not have wanted me here. And you don’t understand that because you’re white.”

12:17 pm Eisgruber adds that he agrees courses on marginalized people should be added to the curriculum’s distribution requirements, but says he doesn’t have the power to make that decision. He says that Dean Dolan is leading a committee for faculty to discuss the issue, and there is faculty on both sides of the argument.

The president addressed the present student and faculty, saying he will not sign the Black Justice League’s list of demands. He elaborated: “I appreciate where those demands are coming from. I agree with you, Woodrow Wilson was a racist…In some people, you have good in great measure and evil in great measure.” 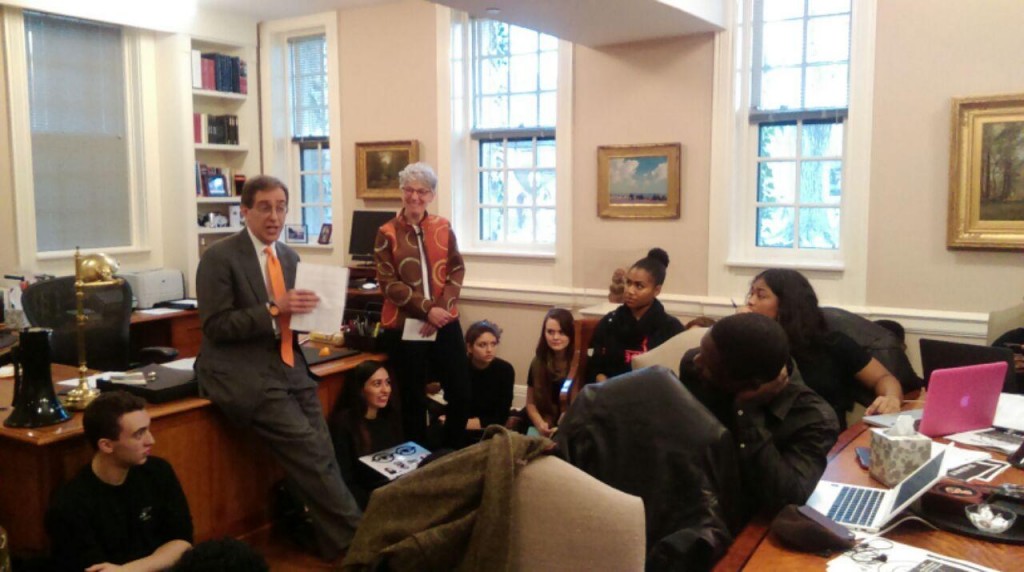 12:06 pm Students continue waiting for Eisgruber in his office, stating:

“We want to make this as awkward as possible for him.”

currently occupying Nassau Hall and the presidents office @Princeton until all our demands are met #StudentBlackOut pic.twitter.com/5ZdsmvySat

11:54 am Students occupy Eisgruber’s office, he is not present. They chant:

“Who built this place? We built it.”

The @Princeton President told students at sit in, that he needs to be convinced racism exists. #StudentBlackOut pic.twitter.com/nybfvwEEb6 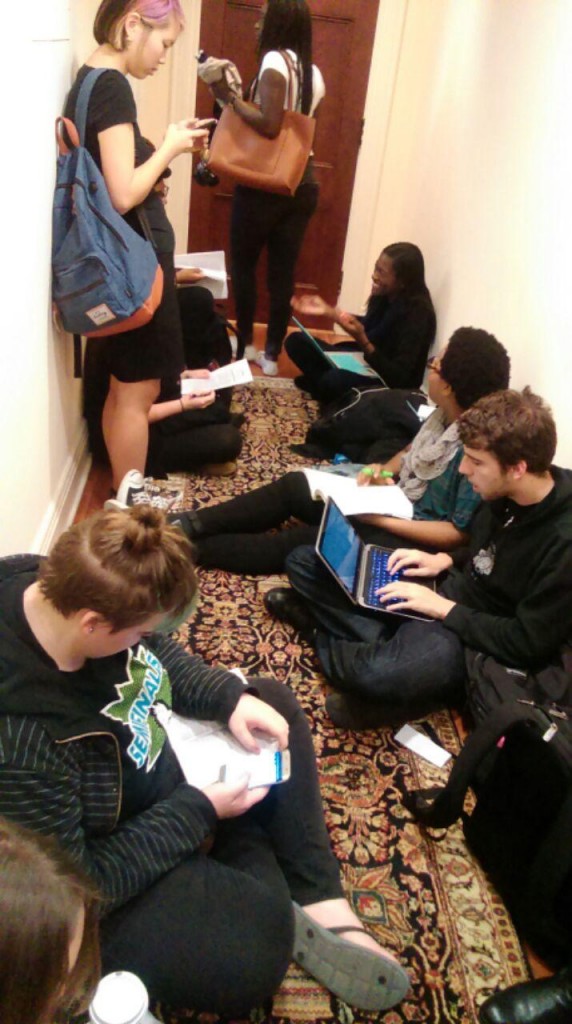 11:44 am Students begin moving inside Nassau Hall for a sit-in protest.

11:42 am Leaders of the walkout read BJL’s demands on the front steps. They say they are willing to stay in Nassau Hall for days, and will not leave until President Eisgruber signs the demands list.

11:40 am Roughly 250 students have gathered outside of Nassau Hall.

11:35 am President Eisgruber arrives at Nassau Hall, stands by steps beside protest leaders 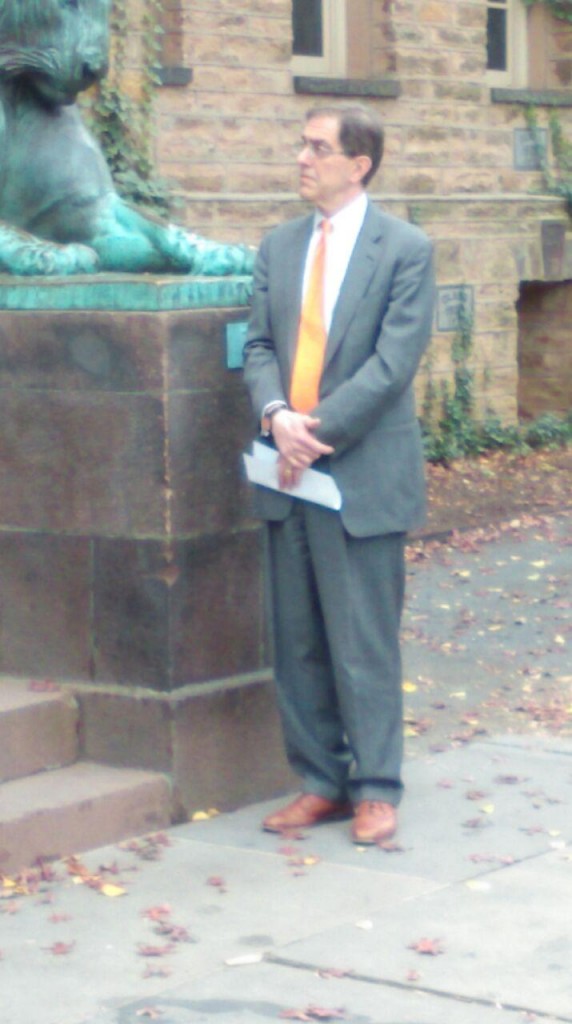 11:30 am Students begin exiting their classes in protest and heading to Nassau Hall. As one example, four students were reported leaving Practical Ethics, a lecture of around 200 students. 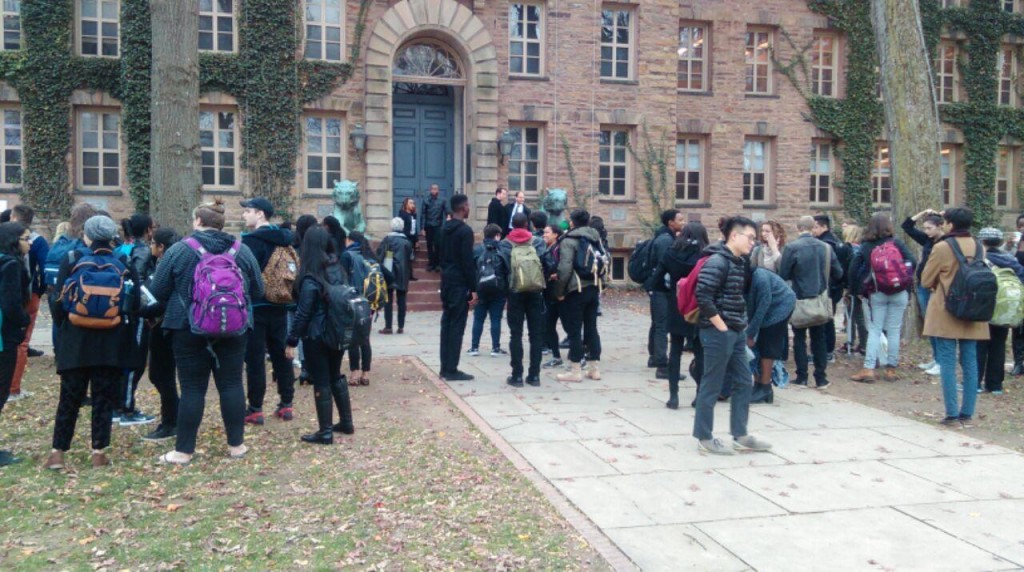