The club had previously been rejected by the Bronfman Center

As announced yesterday on their Facebook page, the NYU Jewish Voice for Peace – a Jewish organization that opposes the Israeli occupation of the West Bank and Gaza – has become an official club on campus less than a year after its launch.

The club have a list of demands, which include "an end to the Israeli occupation of the West Bank, the Gaza Strip, and East Jerusalem; a resolution of the Palestinian refugee problem consistent with international law and equity" and as the name suggests, "peace among the peoples of the Middle East". 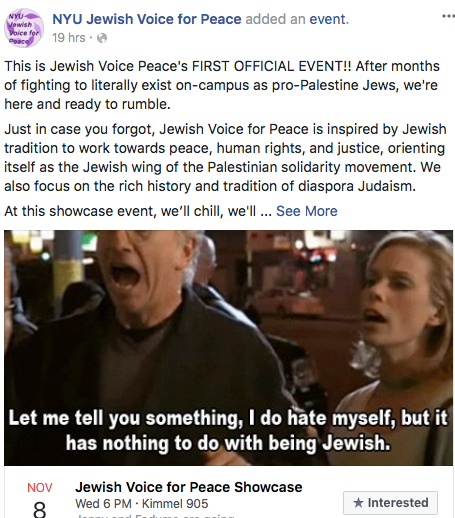 In the past, the organization have held events with the other campus groups such as NYU Students Justice in Palestine and this semester, teamed up NYU's Dream Team to protest President's Trump decision to discontinue DACA. Their key campaign of this semester has been #ReturntoBirthright, which calls for young Jewish people to boycott Birthright, a trip to Israel that is offered to young Jewish people around the world.

The club had previously tried to join forces with the Bronfman Center for Jewish Student Life, which is currently the most dominant Jewish voice on campus, but claim to have been turned away.