NYU, it’s time to release a statement about Charlottesville

Join other universities and show support for your students

Following the violence in Charlottesville over the weekend — executed by white-supremacists and Neo-Nazis that resulted in many injuries and the murder of 32-year-old Heather Heyer — President Trump has failed to consistently condemn and denounce its perpetrators.

Unlike the President, universities across the country have taken a much harsher approach to condemn the violence and released statements that echo this sentiment while expressing support for their students.

Here are some of the universities that have spoken out:

A statement from President Price on the events in #Charlottesville this past weekend.

A statement from President Lambert on the violence in Charlottesville. 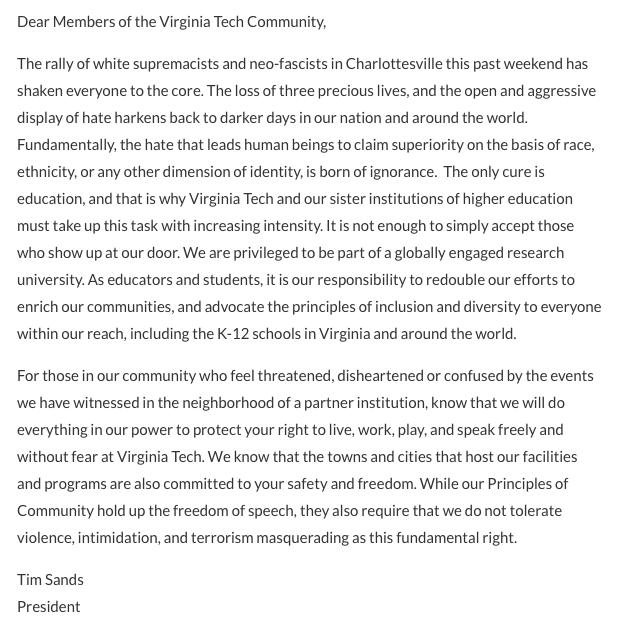 NYU however, has yet to follow suit. There has been no statement of support and sympathy for students who feel hurt and threatened by the events of the weekend, and no statement that condemns the violence, hate and racism that was so grotesquely displayed.

NYU – and President Hamilton – have a history of shying away from taking strong stands in regards to issues concerning the administration. For example, President Hamilton has yet to make NYU a Sanctuary campus, a move that was met with much resistance from faculty and students earlier this year.

Since the incidents that occurred over the weekend didn't take place at NYU or in New York City, some might argue that the administration may not feel the need to put out a statement similar to those of other universities. Additionally, it's necessary for universities to remain a space for debate and discussion of differing thoughts. A statement, when done wrong, could potentially add fuel to an already intensely burning fire.

However, there is no place for hatred at NYU or any university, and especially not in the United States. As a leading university in the country with various communities of students that – in no uncertain terms – were targeted by hate groups in Charlottesville, a statement of support and reassurance is really the least that NYU can do. It's not about making some bold political statement or declaring a particular political ideology for the university, but rather taking a stand as a university to emphasize that this violence and hatred cannot be tolerated at our institution.

President Hamilton, you need to stand for those students that are probably not only feeling angry, heartbroken and confused, but also in dire need of guidance and support from an office which they admire.

Because they certainly aren't going to get it from the President of the United States.