‘This was definitely not a good idea’

I was sweating. I got there 20 minutes early and sat on one of those Bryant Park chairs as it wobbled unsteadily. One of the legs must’ve been shorter than the rest — I was thinking about anything other than what I was about to do.

A week earlier, I decided to go onto whatsyourprice.com as per my friend’s recommendation (“You have to do it, I made so much money”), on a quest to find money without really doing anything. It’s a dating site which, according to its own about page, allows users to use a “cash incentive to get a first date with anyone”.

I made a profile, one that wasn’t linked to my name or email, posted a few cute pictures, and waited. The way the website is designed, men could “wink” at me and offer me a certain amount of money. Then, I could either counter their offer, or accept based on their bid.

It started to become overwhelming when I started receiving multiple $100+ offers.

Did they know I was sitting there, watching Mad Men in sweatpants, and haven’t worn make up in a week?

Regardless, I was thrilled that I could make money just by going on dates with lonely older men in New York City. As long as I wasn’t obligated to touch them, I was more than prepared to do what it took to fund my way through college.

At least that’s what I thought.

We met in front of a little salad place and he greeted me with a kiss on the cheek. Very tall, very blonde (honestly, it may have been white and I may be in denial), blue eyes, a suit, and 49-years-old. He looked refined. I tried not to act surprised at the peck. T his is what grown-ups do, how they act.

I brushed it off and followed him inside. I wondered if anyone thought it was weird that a young girl and an older guy looked like they were together.

Was this a good idea? Every time I asked myself I didn’t bother to answer.

We sat down across from each other at a table in the park and I played with my kale. There were so many people around us and I was terrified someone I knew would spot me across the green and ask me who that guy I was sitting with was. An uncle? Dad’s friend? I wouldn’t know how to respond.

This was definitely not a good idea.

Salad was also the worst date food. Why did he even choose this? I was starving, but there was absolutely nothing graceful about the tip of a leaf sticking out of my mouth as dressing dribbled down my chin.

I put the fork down and listened to him talk about all the sports he plays and all the places he would “totally take me”. I nodded politely, smiled when it was appropriate, and tried not to think about how sweaty I was.

The compliments were nice, though. As much as I felt like I was speaking to my drama teacher in high school, there’s a sick satisfaction in getting a man — anyone, really — to validate your looks.

It scared me. Is that why I was here? No, no, I was in it for the end result. Patiently, I twirled my ring around my finger, keeping my eyes focused on him, determined to be worth the price he would pay.

He wasn’t boring or rude, I wasn’t creeped out. My general experience of the whole thing was embarrassment, especially when he asked me if I had dated an older man before. 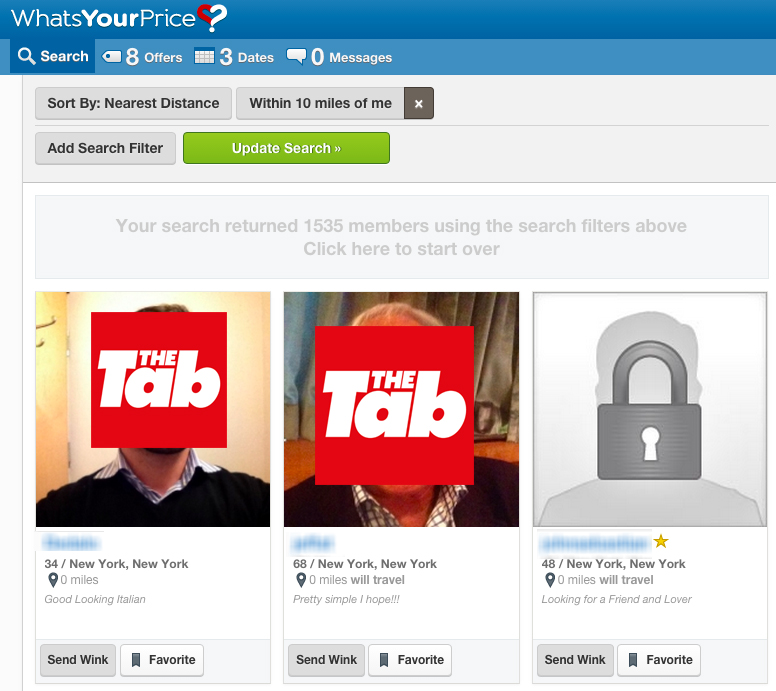 He continued with a few more probing questions about why I was on the website, what I was really looking for. Without too much stuttering I managed to piece together some finagled story about how I was new to the city, and how I wanted to meet people. In reality I couldn’t wait to take the money and head straight to SoHo for some shopping.

After what felt like four hours (it was actually an hour and a half), he slipped the money under my napkin (“Here, this is yours”) and rose to hug me. It was a short embrace, and I was disturbingly conscious of the moisture that had been dripping down my back during the entire hour and a half we spent outside.

I let go quickly, smiled, and said thank you. He promised he would text me later, and I nodded. He was out of view before I began wolfing down my salad, and counted five twenties that he had thrust in my direction.

Besides ravenous, I felt objectified, awkward, and incredulous that I was there, doing that. Later, telling my friends about it, I would laugh at their shocked expressions. I told them they were jealous I made money eating kale in Bryant Park.

Privately, I admit I don’t think I could do it again. The balance of power was so skewed in that moment, and I realized how badly I wanted to be 20, doing 20-year-old things, not having lunch in a public place where I was sure a friend’s dad would approach me.

Next time I need money that badly I’ll probably babysit.

Let’s see how many people are willing to hire me to watch their kids after I publish this article.