Most bathroom stalls at Indiana University are decorated with a Sex & Consent poster commissioned by the "It's On Us" campaign to lower sexual assaults on campus. Yesterday, an unidentified person switched out the official campaign posters with a fake one making a mockery of victims of sexual assault. 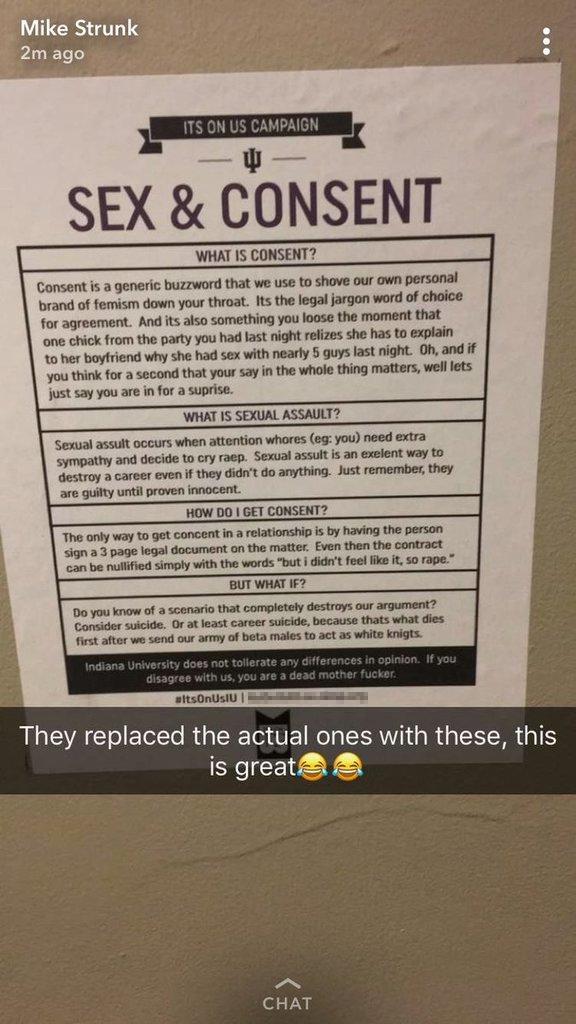 The sign is filled with spelling errors and was not made by Indiana University. The poster is written —misspellings included—below:

Consent is a generic buzzword that we use to shove our own personal brand of feminism down your throat. Its the legal jargon word of choice for agreement. And its also something you loose the moment that one chick from the party you had last night relizes she has to explain to her boyfriend why she had sex with nearly 5 guys last night. Oh, and if you think for a second that your say in the whole thing matters, well lets just say you are in for a surprise.

WHAT IS SEXUAL ASSAULT?

Sexual assault occurs when attention whores (e.g: you) need extra sympathy and decide to cry raep. Sexual assult is an exelent way to destroy a career even if they didn’t do anything. Just remember, they are guilty until proven innocent.

HOW DO I GET CONSENT?

The only way to get concent in a relationship is by having the person sign a 3 page legal document on the matter. Even then the contract can be nullified simply with the words “but i didn’t feel like it, so rape.”

Do you know of a scenario that completely destroys our argument? Consider suicide. Or at least career suicide, because thats what dies first after we send our army of bet males to act as white knigts.

Indiana University does not tolerate any differences in opinion. If you disagree with us, you are a dead mother fucker.

When Erin Foster, a student at Indiana University, tweeted a picture of the poster it was met with outrage.

People are terrible. I don't know how you can replace flyers made to Help people and then continue to mock them and suicide

I feel terrible for any girl who has been victim to sexual assault who had this right in her face in a place we want to feel safe. No words.

When asked what the university would do about the situation, Indiana University replied immediately.

We take this matter very seriously and we are taking action to address it. If you have any information that would assist us, pls contact us.

"[Indiana University] should try to find whoever did it, since I know we have cameras, and punish them as well as take down all the signs," said Sofia Cordon, an IU sophomore. "I'd like to tell them that they're an idiot and to go to hell.”

The insensitive prank comes days after Secretary of Education Betsy Devos announced a change in portions of Title IX. The change was met with fury from many people who think it will be harder for survivors of sexual assault on college campuses to get justice.

Sierra Pennington, a freshman at IU, believes this "awful joke" is indicative of how widespread issues like sexual assault are among the student body.

"The fact that people make it to this age and still hold beliefs like that reflects how society has failed them," Pennington told The Tab. "And I feel sorry for them that they haven't been raised right and don't understand the importance of a topic as serious as sexual assault and consent."

We are disgusted, outraged and deeply saddened if these signs have in fact been replaced and posted anywhere on the IU Bloomington campus. Our disappointment is not only with the content in its entirety, but to the reaction of the individual who posted this photo commenting that it is “great," along with laughing emoji’s. Issues surrounding sexual assault and consent are not laughing matters. Nor is implying that false reports are common or that individuals who report sexual assault are “attention whores.” The reality is that the stakes and negative consequences for reporting a sexual assault are much higher for survivors than perpetrators or alleged perpetrators. We know that sexual assault is already one of the most-underreported crimes and that research supports that false reports are extraordinarily low (in the range of 2-8 %, which also includes those who have been sexually assaulted but choose to recant for multiple and valid reasons). The rate of false reports of sexual assault is, in fact, consistent with all other crimes.

We hope that swift action will be taken to find and remove these signs and that any and all involved will be held accountable to the fullest extent.

Middle Way House provides services for survivors of sexual assault, which includes any type of sexual contact or behavior that occurs without the explicit consent of the recipient. For support, contact our 24-hour Crisis Line at 812.336.0846. We believe you. It’s not your fault.

If you have any information regarding this poster, notify the Office of Student Conduct: (812)-855-5419