Activist organizations rally for ‘love, not hate’ at Sample Gates

On Sunday afternoon, 12 IU student and Bloomington organizations rallied for “love, not hate” at the Sample Gates in response to the 2016 presidential election results.

At 3pm, IU students, student activist organizations and Bloomington residents made their voices, fears, and opinions heard at the Sample Gates in a discussion about the ungovernable resistance.

Multiple groups on campus and individuals organized the “Community Defense and Resistance,” which was publicized on Facebook only three days before the rally. These groups are made up of individuals who are concerned about the most vulnerable communities that are affected by the President-elect Donald Trump, such as human rights for the LGBTQIA community and women, the undocumented immigrants, the homeless, those living with a mental illness, and more.

Protesters sang the chorus of, “This Little Light of Mine” and held posters that said, “You can’t comb over racism,” “Love wins,” “Love is power,” “We will be the change,” “I stand for peace, justice, and equality,” and more. 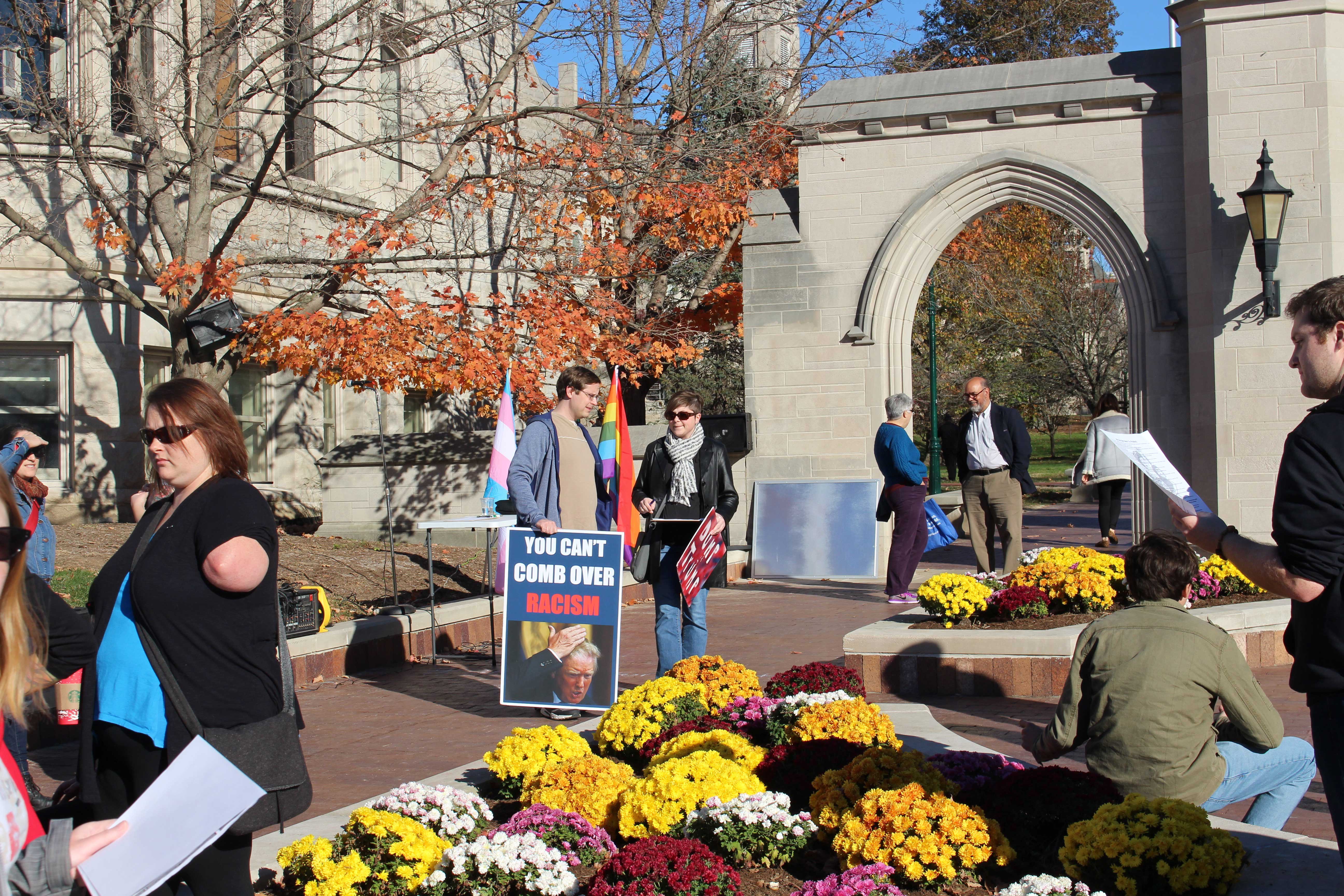 Many IU female students were in attendance because they were afraid for loved ones who are minorities and wanted to show their love and support by being a voice for them.

“A lot of people I care about are directly affected by the policies put in place by the government. Some of my co-worker’s faiths have been under attack, and they are the nicest people I know,” IU senior, Kelseigh Ingram said.

Spokeswoman and event co-organizer Alex expressed the fears she faces personally with the president-elect in her opening speech at the rally.

“I cried and cried about what it meant to have Trump as the president of the United States,” she said. “I was thinking about what we could do to resist. And right now, my only solution that I could come up with is to be as gay as humanely possible. Like getting a neck tattoo of a bald eagle with rainbow feathers getting shot out of a glitter cannon – that kind of gay.”

At this statement, cheers erupted from the crowd.

In her speech, she also expressed ways to counteract Trump’s hate toward American minorities.

“We are motivated by the sense of urgency to stand up for ourselves and for the vulnerable communities. We are here to say no, we are here to resist, and we are here to figure out how we can ally ourselves with each other so that we can form a powerful coalition of resistance. Anger is not the antonym of love.” 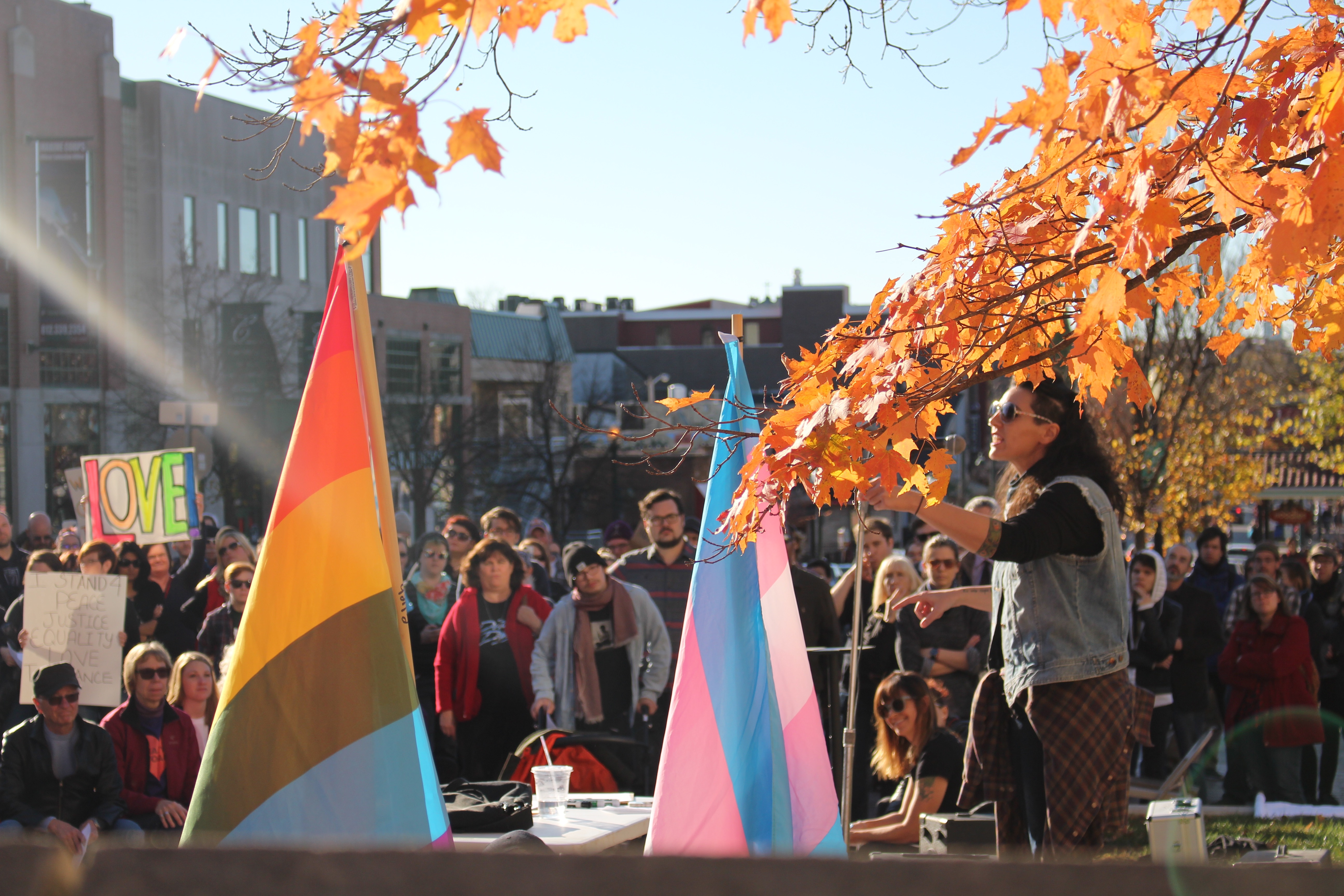 Event spokesman Joe said that this is a gathering in resistance to the political violence, and that we’re here to defend the undocumented, their families, and ourselves. 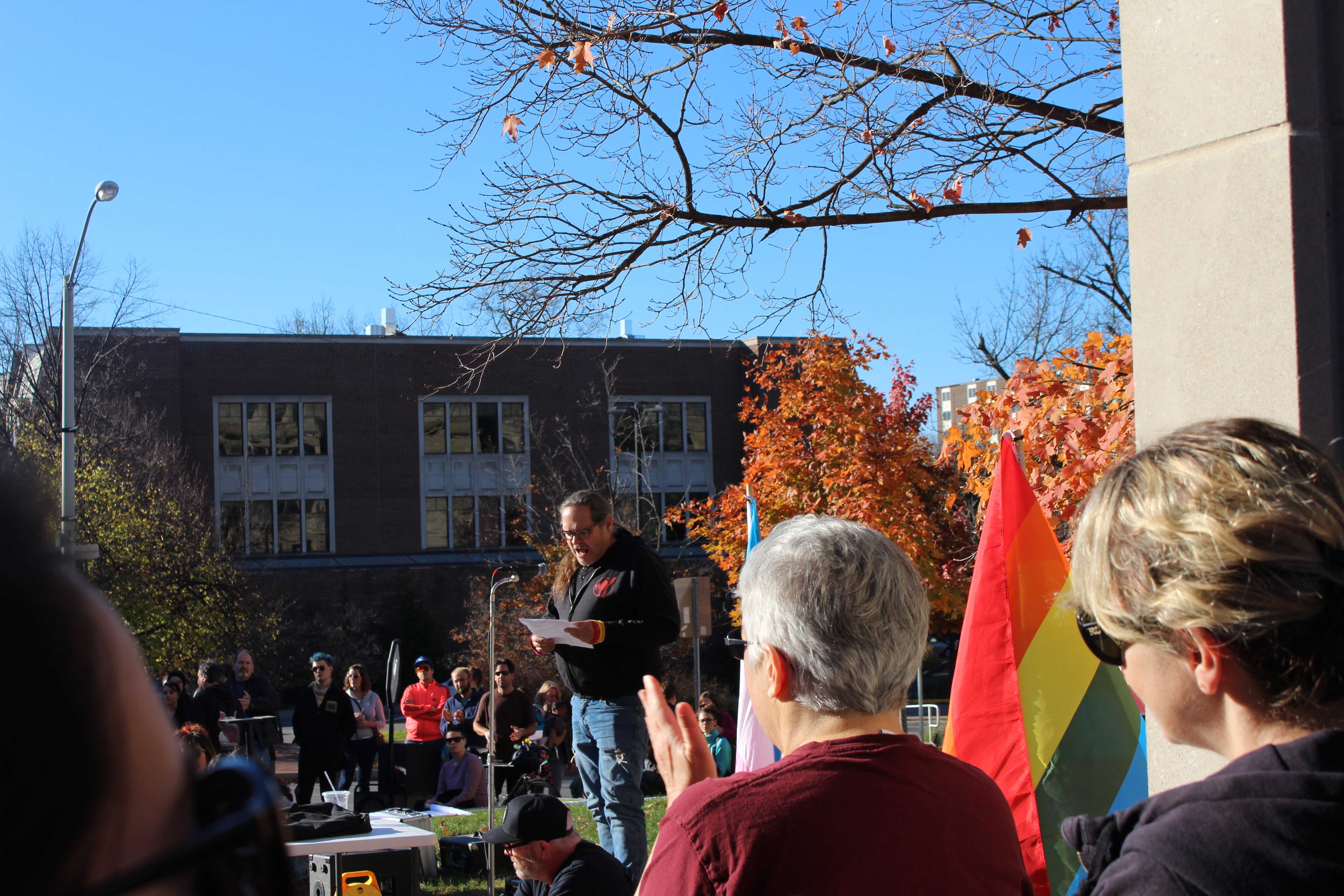 William Morse of Bloomington NAACP encouraged love and positive energy throughout the crowd by prompting each person to tell the person standing next to them, “I’m glad you’re here, and I’ve got your back.”

“We are in fear of harassment in and outside of our schools, policy changes that could allow for acts of violence towards us and regression in LGBTQ+ healthcare,” Bri said.

“Many of us worry about being out, open, and authentically ourselves. We ask you to accept and affirm the LGBTQ youth in your life and make sure that the spaces they occupy and are present in are safe. Now more than ever, it is important to make sure that our voices are being amplified and that our hearts are being validated,” Isaac said while crying.

Isaac’s speech resulted in cheers from the crowd saying, “We love you.”

IU sophomore and co-founder of IU Students for Democratic Society, Stanley, united the crowd in chanting “human rights” in response to his fears of the newly elected government leadership. 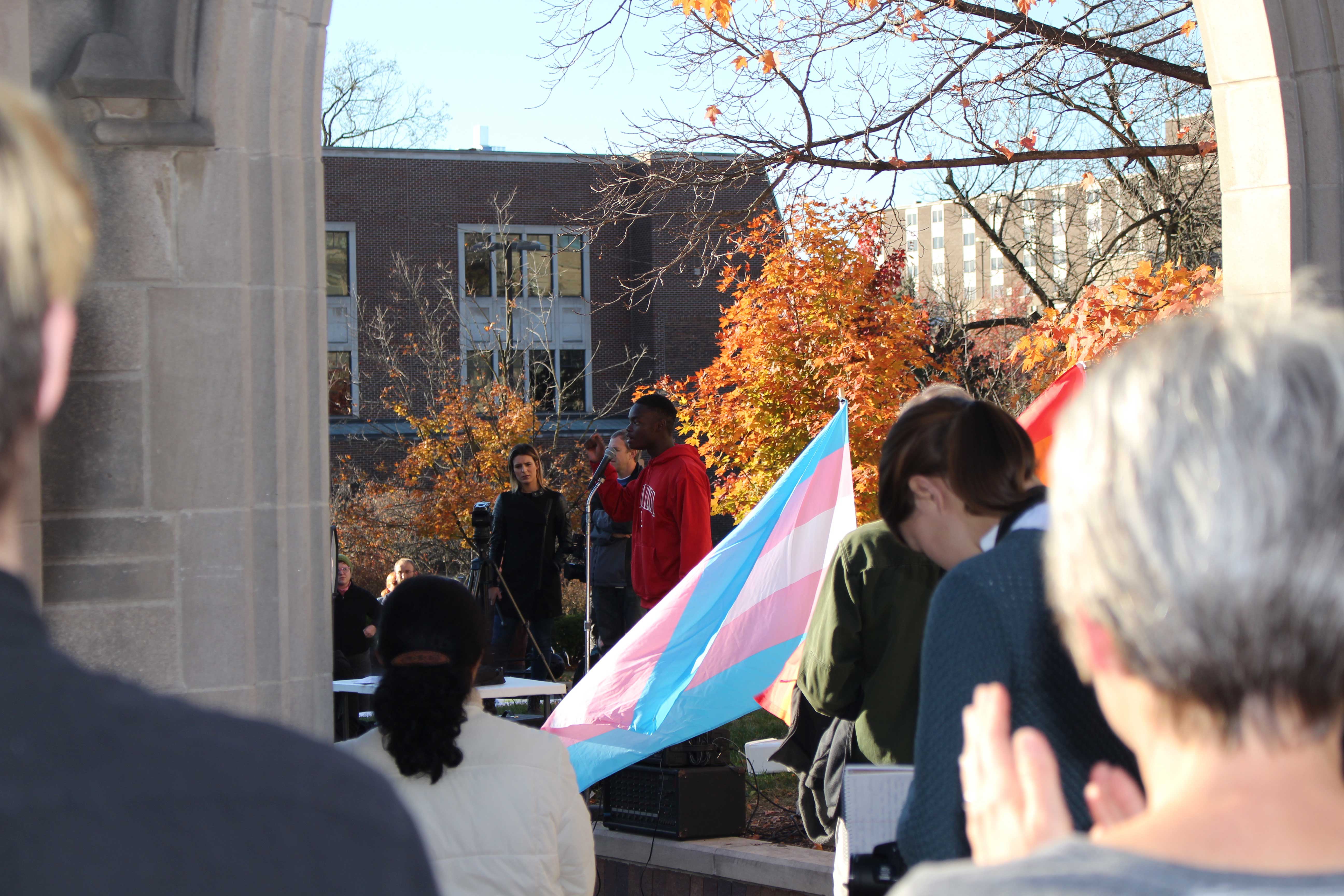 The crowd chanted “Si se puede.” He then chanted back, “Because black lives matter we will,” and the crowd yelled, “Rise up.”

He repeated, “Because LGBTQ rights matter we will,” and the crowd yelled, “rise up.”

“Because women rights matter we will,” and the crowd yelled, “rise up.”

“Because the power of the people will always be better than the people in government we will,” and the crowd yelled, “rise up.”

Alex, returning to the front, told the crowd that, “All of these groups are disenfranchised under one person and we can use that to his disadvantage. And we will. We will be [Trump’s] worst nightmare.”

The crowds’ unity and emotional support toward every race, gender, religion, and sexual orientation was projected in rally for one common desire: love. 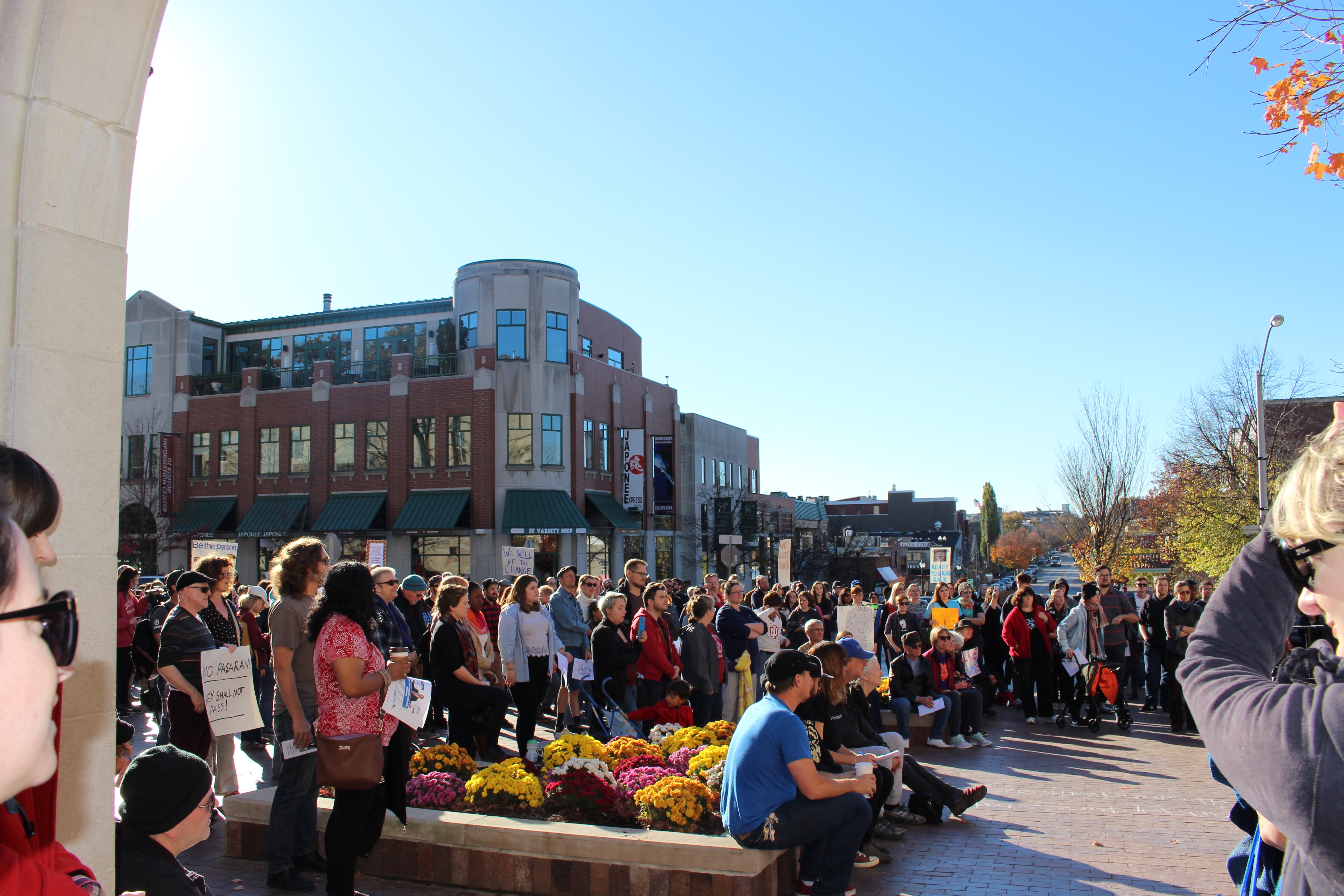