The atheistic acorn life chose him

An acorn on Yik Yak made some interesting points yesterday morning, and The Tab asked if he would be willing to speak to with us about his views on abortion. This acorn-man got in contact with The Tab through an anonymous Facebook account called Mysta Acorn.

Here is what an anonymous atheist acorn had to say about the presence of anti-abortion propaganda on campus yesterday. 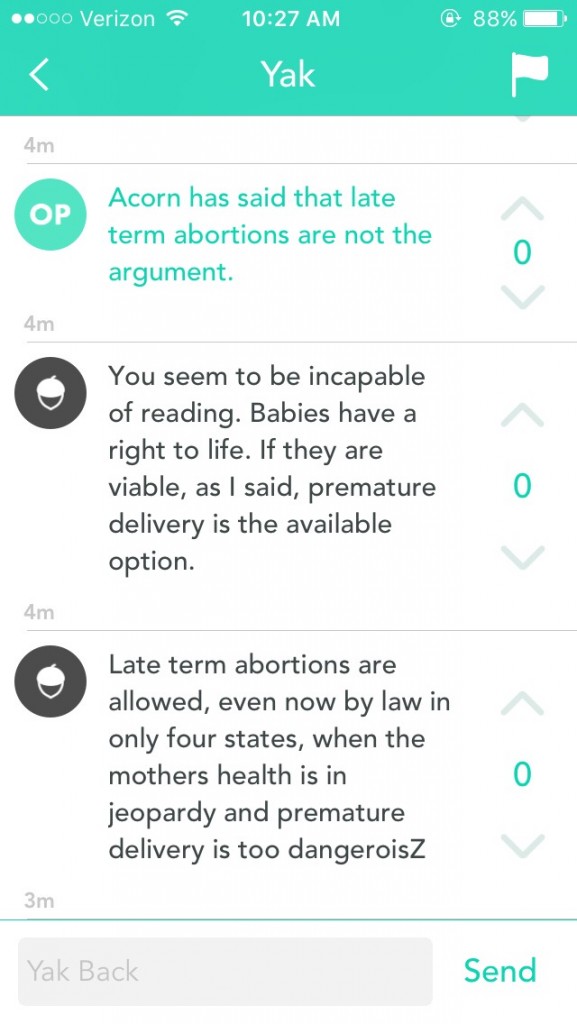 Can you tell me your age and what you are studying?

I am 28 (male) and I am currently a PhD student in Electrical Engineering at UF.

I found you on Yik Yak, what was it about the post that elicited a response?

They are most definitely against women. I think it is time we stop telling people what they can and can’t do with their bodies, and stop trying to scare them into sharing our beliefs.

How do your experiences in science… shape these views?

As a scientist I try to put logic, reasoning, and evidence first. As an empathetic being I am definitely affected by the shock imagery in Turlington; seeing a severed hand-like collection of cells would affect anyone.

But at the same time I can reason that there is more to the human condition than just cells. The morality of abortion is definitely not something that is easy to determine. I obviously am glad I wasn’t aborted. But to me it becomes easier when think about what right bodily autonomy reserves someone, and the consequences of not allowing abortion.

Do you agree that groups straw man the argument simply because there is no foundation or scientific warrant for their argument?

I would like to assume that straw-man arguments are more of a result of being ignorant of someone else’s point-of-view rather than being willful. It is definitely easier to attack a strawman when the other side has better arguments, however.

To me it is easier to look at this whole debate as an issue of bodily autonomy. Should we, in any case, allow another person rights over another person? In my view, no. If I needed a kidney or part of a liver to survive I cannot force my need to continue living on someone else.

What upsets me most about the way the anti-abortion activists are approaching this debate is their use of shock imagery. They’d rather shove emotional imagery infront of you and say “SEE?” rather than speak about reasonable arguments for their point of view. What if I were a woman who recently had an abortion or are currently thinking of having one? That would be extremely stressful I’d imagine.

How many years have you been in Gainesville seeing this protest?

I can’t remember a year over the past 10-ish (jeeze) that I didn’t see this protest. I have definitely seen it throughout my entire graduate studies.

What would you say if someone from the pro-abortion side of the aisle said the moral thing to do was to take someone’s kidney because they only need one to function, or a part of the liver since the cells regenerate?

Then I would walk them to the closest hospital and help schedule their extra organs for donations for people that need them that day.

I know you don’t have the exact answer to this but, in your opinion just by walking by are these pictures scientifically legitimate?

Are you asking if the photos are legitimate? I would assume that they are for the most part. But early-term abortions are nowhere near as human-like as the ones they show. They obviously can’t evoke an emotion response with a picture of some blood, however.

Why are you choosing to remain anonymous?

I don’t believe that personal identity of the supporters of an argument should have any impact on the legitimacy of an argument. Arguments should stand for themselves.

But then who is supposed to stand up for people whose bodily autonomy is at risk?

Society as a whole needs to stand up for people whose bodily autonomy is at risk. I am extremely mad at South America right now for their religiously-motivated ignorant beliefs preventing abortions in the light of the Zika virus.

I do not believe that trying to scare or shock people into believing something is ethical. They are taking advantage of our humanity to fit their world views.

I am choosing to remain autonomous primarily because I am an atheist and would prefer to “stay in the closet” so that it doesn’t impact my personal or professional life. We may live in the USA where we can believe whatever we want (and belief in a god or gods is actually celebrated) but lack of a god belief on the other hand can still get you in some sticky situations.