UF is clearly the inspiration for the new American Hogwarts

The University of Florida provides a sense of magic that is evident to all who come to The Swamp. An acceptance email from UF is every applicant’s equivalent to getting their very own letter to Hogwarts. Upon choosing courses here, we have to adhere to the common core, the same way wizards have to pay attention to the classes that will prepare them for their O.W.L.S. Some applicants–the legacies, the athletes–are unsurprised by their acceptance, while others–those of us coming from large public schools, or perhaps the token out of state applicant–are shocked by the email revealing the fate of their next four years.

With prominent Greek life, many of us endured the same anxiety as Ron Weasley during recruitment. In the 30 seconds that the sorting hat takes to determine our house (or eight days, thanks Panhellenic…), we are placed in the houses that we were destined to be a part of, and let’s be honest, it is mortifying. Like Harry’s fear of being in Slytherin, everyone dreads certain houses because we all know who the Hufflepuffs and Slytherins are on row. Instead of house scarves, which Hermione effortlessly rocked, we sport Comfort Colors. *RIP campus fashion* 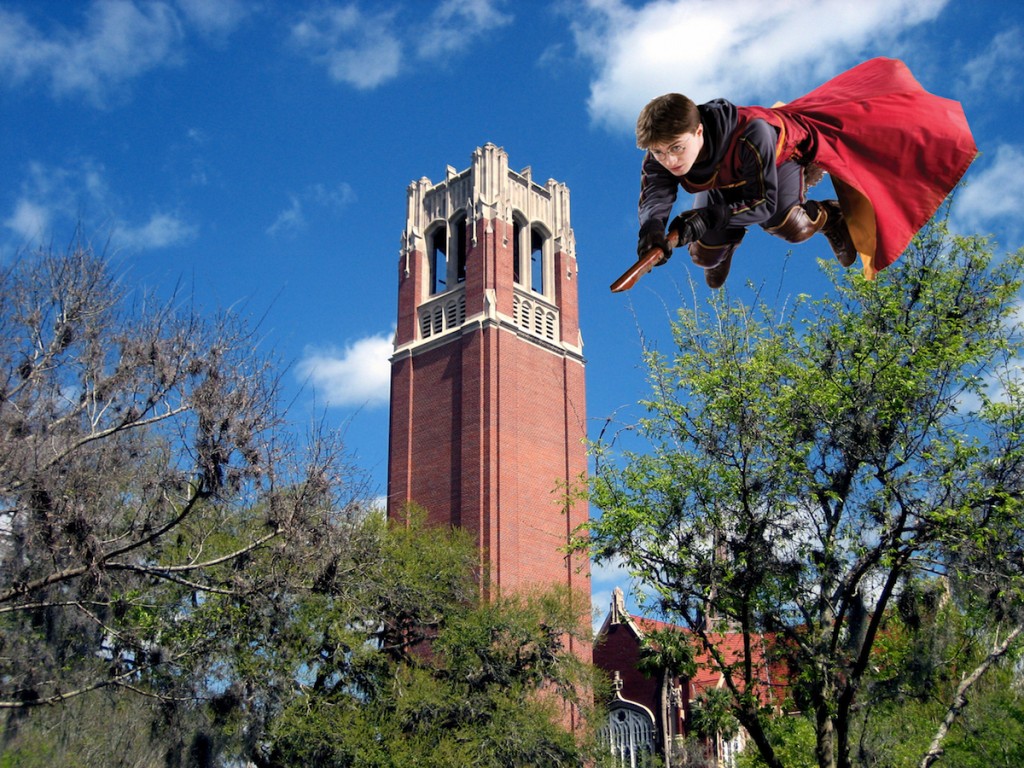 Leaves rattle on the ground surrounding the business school, and Century Tower’s distinct bells harmoniously ring. Fall semester exemplifies the first year excitement regardless of your year, and Gator Growl mirrors the tradition of feasting in the Great Hall. Enclaves like the hidden gems near Lake Alice are as mystical as Hogwarts’ vast lake, though I’ve heard Gillyweed hasn’t been approved by The Ministry’s FDA.

J.K. Rowling saw The University of Florida while traveling to the opening of Harry Potter World at Universal and she saw something grand: Ilvermony, The Wizarding World of North America’s Finest Learning Institution. The state of the art Reitz Union’s enchanting exterior is the epitome of modern day magic; precise, innovative, unexpected. J.K. Rowling was undoubtedly a consultant on its architecture; have you seen the stair cases? They posses the ‘Night of the Museum’ aura of “I gracefully come to life and move around in the middle of the night.” And the Reitz bookstore is practically our Ollivander’s because we all know that our first Gator sweatshirt chooses us. 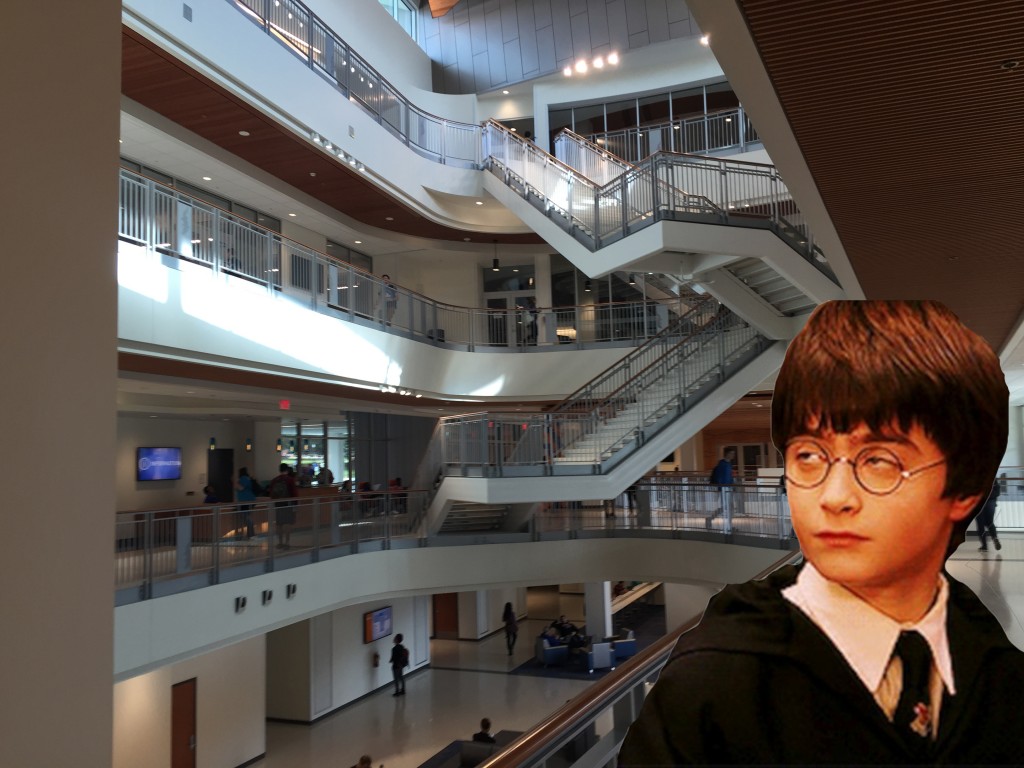 Reitz stairs are obviously the equivalent to the moving staircases

Anderson Hall looks is where the modern American wizard would take an upper level History of Magic class. Between its classical brick structure and dark wood interior, it’s the type of building you could sit in for hours drinking Know Where Coffee, or perhaps pumpkin juice.  Keene Flint is surely where a professor like McGonagall would hold her office hours with corridors that look like the halls leading up to Gryffindor’s painting of the Fat Lady.

“The Good Life” is the absolute equivalent to Divination, I have not met a single UF student who has benefitted from the absurd graduation requirement. Any chem class mirrors the complexity and difficulty of a Potions class with Snape, and Defense Against the Dark Arts is our constant and successful media bashing of FSU.

Though The Swamp is essentially the middle of nowhere, Downtown is as charming as Hogsmeade. Once we get our permission slips signed aka turn 21, a whole new world comes to life. Finally, there is a new part of college to explore with bars that are our very own Three Broomsticks. The Barcade and Tall Paul’s Brewhouse are the little taverns through which we experience this ‘new world’.  And let’s be honest, a Fats Slushy is 100% the Butterbeer of Gainesville. I would not be surprised if there was a gator flavored Bertie Bott’s Every Flavour Beans–they say it tastes like chicken!

Ilvermony’s edition of Fantastic Beasts and Where to Find Them has an alligator on the cover, because what else would be the fantastic beast of The South? Payne’s Prairie is where the Triwizard tournament would take place with ample space for the world’s greatest maze. Gator football is our Quidditch, and UF has the greatest keepers–have you seen Tim Tebow? He’s our golden snitch…or maybe that’s Ryan Lochte. 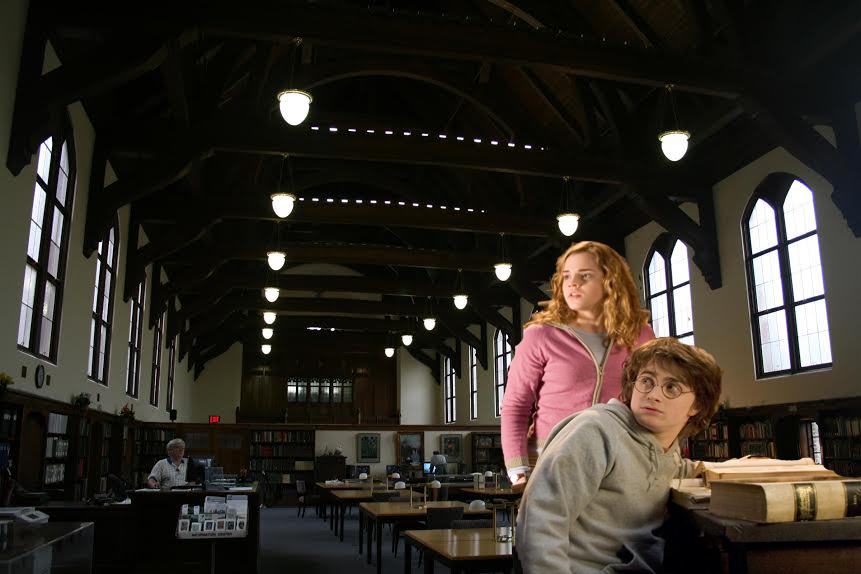 Marston Library was built for Ravenclaws, Lib West for Hufflepuffs, The Law Library for Gryffindors, and Norman for Slytherins which explains the great library divide. At Lib West people use Yik Yak as their invisibility cloak, and any engineering major will tell you that they’ve seen Death at Marston since it is a 24 hour library.

At the end of the day, we all worked extraordinarily hard to earn a spot at UF, Ilvermony’s inspiration, and we are all part of President Fuchs’ Army. From Debbie Wasserman Schultz to Marco Rubio–take your pick–only the finest and most talented individuals are privileged enough to call themselves Florida Gators.

P.S. Rumor has it that James Sirius Potter will be studying abroad this coming fall…if he’s seen UF, it will definitely be Ilvermony.