Detained and set for deportation: The Sheffield PhD student who fled ISIS

Over 2,000 have signed a petition to let him stay and finish his studies

More than two thousand people have signed a petition in support of Sheffield PhD student Ahmed Sedeeq, who faces deportation over visa issues.

Ahmed, who is from Mosul in Iraq and currently studying for a Computer Science doctorate, has applied for an extension but the University of Sheffield are allegedly yet to process this. It is claimed he is now being detained by the Home Office. 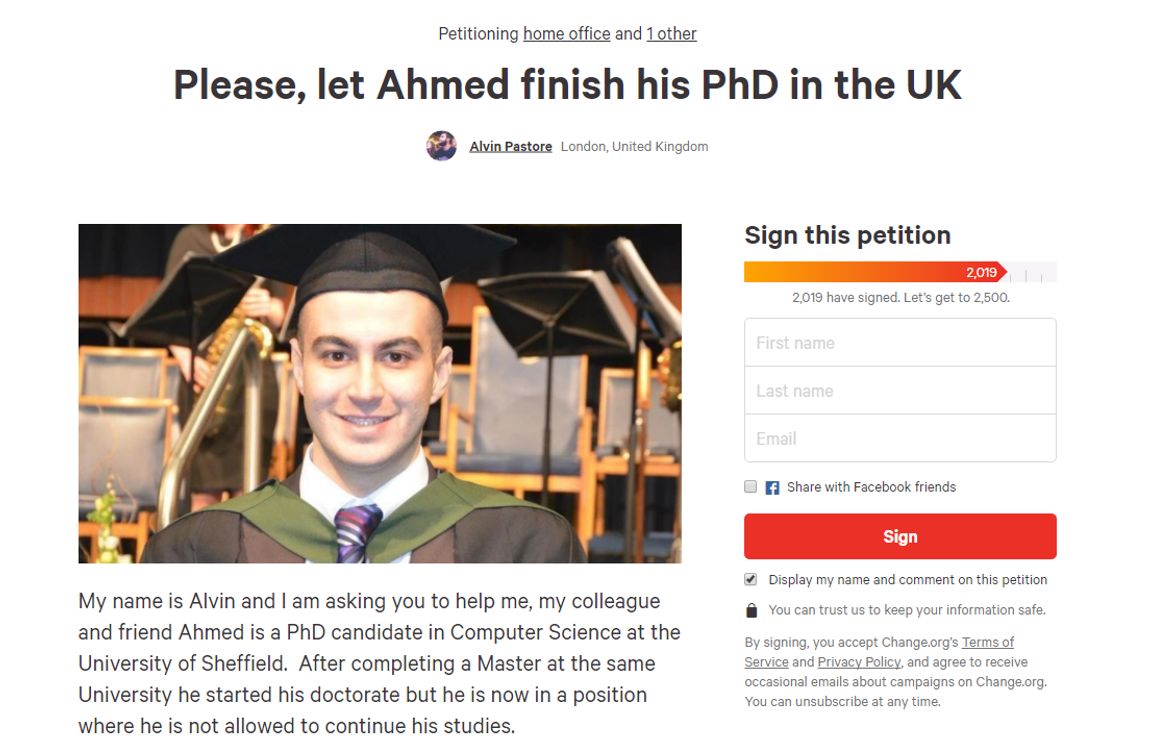 His close friend Laura Vergil explained that Ahmed first came to the UK in late July 2011 to start his MSc in Advanced Software Engineering at the University of Sheffield. Upon completing his MSc course, he returned back to his hometown of Mosul.

He then gained a PhD position at the department of Computer Science again at Sheffield and applied for a student visa, coming back to the UK in May 2013. In 2014, with the rise of ISIS and his hometown of Mosul becoming the capital of the so-called Islamic State, he knew his life would be in danger and so applied for asylum in the UK.

His case was rejected multiple times but he eventually got a shortened student visa after providing the necessary evidence. Following miscommunication with the Home Office, who initially told him his visa was still valid, he ended up overstaying it without realising and is now being held at Morton Hall.

Ahmed, a PhD student at uni of Sheffield, has been detained by the Home Office and is at risk of deportation. Please sign/share: https://t.co/vXVPYhavsS

Laura claims that: "His conditions are appalling considering he has not committed any crime.

"He is locked in a room with no toilet, has 50 minutes of very slow internet per day, preventing him from communicating effectively with his lawyer, and was even refused lunch on Wednesday for no obvious reason."

"He has been informed that he is at risk of being sent back to Iraq at any time. He is under a lot of pressure and his mental well being is currently of concern for us to be deeply worried about him. He's openly an atheist, and has spoken out against Islamism multiple times, meaning his return to Iraq would be a threat to his life.

"He's integrated very well and should have a chance of finishing his PhD studies here in the UK, which he self-funded and has already spent £57,000 of tuition fees on."

The petition, set up by his colleague and friend Alvin Pastore, states: "He is currently being detained by the Home Office, treated like a criminal, kept in a room with no toilet and with limited access to the internet.

"Ahmed applied for an extension but the University is taking too long to process this request…he is facing deportation at any time.

"All his friends and colleagues know him for the kind-hearted person he is, a selfless friend who has always been there for everyone, in any circumstance."

Hi everyone! Ahmed was my next door neighbour while I was in Sheffield, he is a PhD student however due to visa issues he is currently being detained with a high risk of being deported. Can you please follow the link to sign the petition. Thank you. https://t.co/mMHzmnD517

A spokesman for The University of Sheffield said: "The University is aware of Ahmed's situation, however we can’t comment on the details of the case at this time.

“We remain committed to ensuring our universities remain diverse, inclusive communities of international scholarships open to students and staff from across the world."

Santhana Gopalakrishnan, International Students' Officer at Sheffield Students' Union, told us: "The Students Union is aware of the case, we are in direct contact with his friends and we are seeking to contact him directly.

"We are are deeply concerned about the welfare of one of our members and we are working to establish the exact details of the case in order to understand how we can best support him."

The Tab have contacted the Home Office for comment.