The team was excited to get their first home win of the season to mark the release of their new home kit. UCL got the strong start they wanted with some clever interchanges and plenty of communication and it wasn’t long before Katy zig-zagged her way past the opposing defence to score the first try. With team spirits high, UCL were keen to apply the early pressure and get more tries. Shortly after the first, Eleanor bossed the field and ripped apart Kingston’s defence, dragging at least three defenders with her over the try line to score the second. 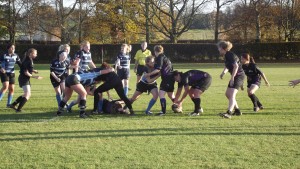 At this point, UCL were dominating possession of the ball whilst also maintaining a strong defensive line, barring any of the Kingston players from breaking through. After some skilful passes and great teamwork, it was Tonje this time who used her cheetah-like pace to score the third try of the game. The Kingston players looked beaten and the match was beyond them after Jess outsmarted the opposition and flew past their defence sending UCL four tries clear into the break. 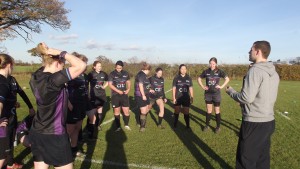 Half-time came just in time for Kingston who needed some inspiration and hope of making a comeback and to re-energise themselves after a brutal first half. It seemed that the Kingston players came back after half-time more violent and vicious than ever resulting in some foul play where some of the players were punched and Vice-Captain Eleanor was kicked in the stomach. Whatever the tactics were, they momentarily shook up the previously composed UCL side and Kingston took full advantage by scoring their first try and sparking a faint chance of a revival.

They were to be denied however as UCL turned on the style with Katy treating the crowd with an epic diving try as she leapt over the Kingston players, using them as props to her advantage. UCL continued to play some slick rugby throughout the game and Jess ended the match with the final two tries. Special mentions to Tonje for scoring 5 tries overall, Jess for her hat-trick and Katy and Eleanor for both scoring two each. 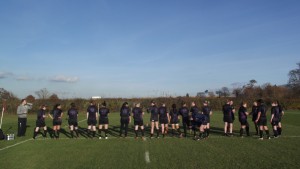 It was a healthy and promising warm-up going into the match against our Strand Poly rivals next week with many in the team believing another thrashing could be on the cards.

Man of the match: Alice – for some great runs throughout the game
Wanker: Tonje