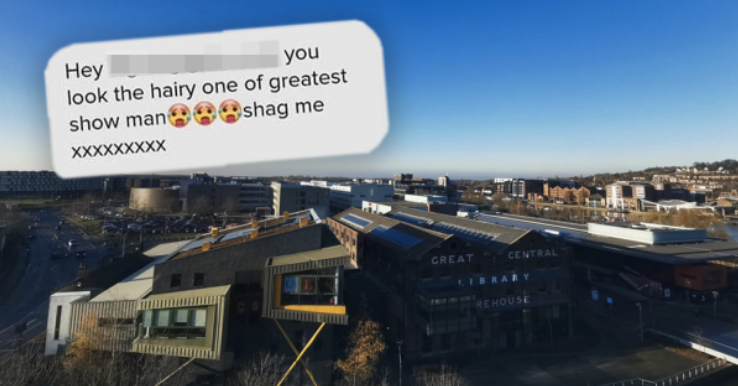 ‘It terrified me’: Black Lincoln student gets sent racist message on Tinder

A Black female University of Lincoln student has received a racist message from a joint account who she matched with on Tinder.

The message she received said: “Hey n*g n*g g*lly w*g you look the hairy one of greatest showman. Shag me.”

The student described what she received as a “cruel message” and said it “terrified” her when she first saw it.

All of the individuals pictured on the Tinder account – which included the names and pictures of four boys, including two Lincoln students – have denied sending the message. They say a third party sent it after being given one of their phones, and that they have apologised for what has been sent.

The Tab Lincoln understands students at the University of Lincoln are not responsible.

Both the University of Lincoln and Lincolnshire Police are aware of the incident. 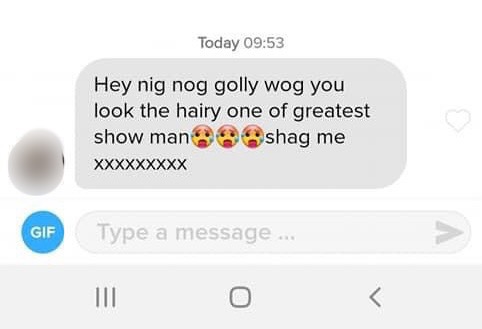 Speaking to The Lincoln Tab, the student said: “I didn’t even mean to swipe right on the account. I was planning on having a productive day; I woke up on time for my lecture and I was even planning on heading into the library to do some work and then I saw that message. It confused me at first and then it terrified me.”

She thought the message was “cruel” and “dripping with disdain aimed towards me and the only thing I did to provoke them was be black.”

The student, who is not from Lincoln, explained she had never been subject to overt racism as a result of being “raised in multicultural London surrounded by loads of people that looked like me and protected me from experiences such as this.”

Despite trying to not let the message impact her, she revealed that it did. “It threw me off, distracted me from my initial plan of productivity. It genuinely upset me. I blamed myself at first; I should have protected myself better, done something differently. But there’s nothing I could’ve done”, she said.

She told The Lincoln Tab: “I can’t anticipate when I’ll receive racial abuse and in retrospect, I see now that thought process was ridiculous. I didn’t respond to the message because I knew that I was going to do something about it.”

The Tinder account is joint between four separate individuals, with the bio saying: “Swipe right and say who you want to swipe right for and then we will give you their Snapchat.”

The Lincoln Tab has spoken to the individuals involved, who have since issued apologies. They all say the message was sent by a friend of one of the boys who gained control of a phone with access to the account.

One of the individuals expressed they are “completely sympathetic to the student who has been offended.” He continued to say: “Such vile and blatant racism cannot be accepted anywhere. I want to offer my deepest apologies.”

Another apologised for the “vulgar and disgusting message” that had been sent from the account, as well as apologising to anyone who has taken offence to it. He said: “There’s no place for racism anywhere so to see this sort of message being sent isn’t on.” As a group, they are “disappointed and appalled” in the behaviour displayed.

One individual said: “I would like to say me and the other three boys who made this account are extremely sorry and aware of what has been said is completely wrong. Along with this, we were not the ones who sent the message. I let my friends go on my account so they could message people and never thought in a million years they would send something as horrible as this.

“Again, the three boys and I who own the account are very sorry for the message and apologise to the girl.”

One of the boys said he is “sorry they had to have this messaged to them.” He explained he had “no knowledge” of the message and is “so sorry that they had to be subject to disgusting racist abuse.”

The University of Lincoln told The Lincoln Tab it is aware of the incident and said in a statement: “The University of Lincoln encourages students to come forward and report instances of hate, bullying or harassment. We actively campaign and work hard to provide a positive and supportive environment with expert staff, where students can feel able to call out abuse and support each other in challenging and reporting hate and abusive behaviour.

“We want our community to feel safe and to report any incident they experience or witness, and we would encourage students to contact Student Services, whether to report hate or ask for support.

“When confronted by racism at Lincoln, we will stand together as one community to oppose hate. We will be overtly and proudly anti-racist. Racism, hate or abuse in any form is abhorrent and will not be tolerated by the University of Lincoln and we will investigate reported incidents and take action.” 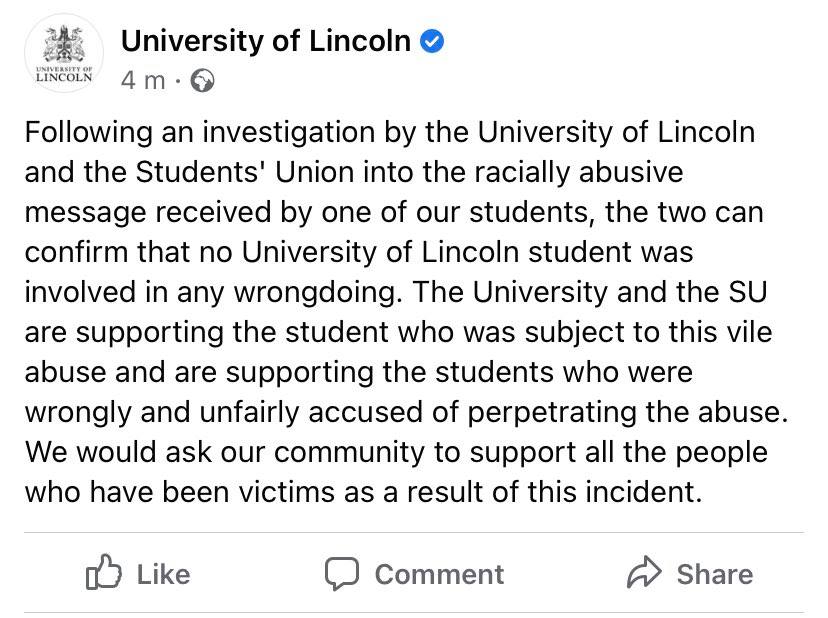 A spokesperson for Lincolnshire Police said: “We are investigating an incident in which a woman received a racist message over Tinder.

“There has been some speculation on social media regarding who is responsible. This is irresponsible, unhelpful, unfair and potentially libellous.

“We are working to ascertain if the message came from the alleged account and who had access to that account. Please delete any comments or posts in which any individual is named.”